It's December 14th and it'll be the last Christmas posting dates before you know it. Better open the door and hand your pressies over.

Matthew: I’ve said it before and I’ll say it again: I’m really envious of Yoku. He lives inside a giant pinball table, which means the world does all the hard work for him. Imagine just sitting there as flippers bat you towards your destination, or coasting on metal rails from one side of town to the other. Yes, you’d live in constant fear of The Abyss, but have you read the headlines recently? The threat of falling into an ambiguous pit can’t be any worse than [insert whatever shitshow you’re currently dealing with]. Regardless of whether Yoku’s Island Express is a great game, it’s a solid pitch for where we should be taking our infrastructure. 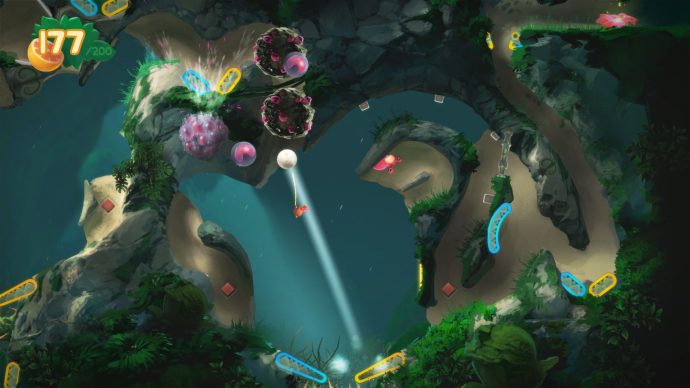 Luckily, it is a great game. One that makes a clever connection between pinball and exploration. What are pinball tables, after all, but landscapes dense with secrets that you unpick by squeezing the ball into crannies or opening new routes by exploiting obscure rules? Villa Gorilla’s magic touch is splitting the world into a network of smaller tables. It’s pinball for people too impatient for actual pinball, giving a constant rush of new challenges, while still channeling that core satisfaction of nailing the perfect shot. It also has lots of fruit pick-ups that plink and plonk happily - as any serious GOTY contender should.

On top of all of this there’s a layer of Metroid-y thinking, as new abilities open new routes and reinvent previous paths. I’m very fond of the slug hoover, which is not something I expected to write this year. One of my favourite things in this kind of exploration platformer is uncovering a map screen and seeing a vast world unfold in cross-section - that this map connects into one massive pinball table is doubly pleasing. Both Metroid clones and pinball games are hard to get right, for Yoku to tackle them both, and find so much interesting interplay between the two, made this the most pleasant surprise of the year.

Graham: I associate pinball tables with dank bars, dilapidated seafront arcades, and the crushing regret that comes after three balls have plummetted beween the paddles, taking your money with them. Yoku's Island Express is the antithesis to all of these things, set as it is on a sun-kissed island of happy creatures, plentiful fruit, and playful rhythms. Here, pinball isn't about grafitti art and skulls on fire, but about the fun and freedom of pinged, spun, and shooped along rails and around a colourful world.

I was convinced to play it by its trailers, so I'm going to put one here in case it does the same for you:

What I was grappling with in my Yoku's Island Express review was that I thought Yoku was probably a very good game rather than a great one. I still think that's probably true, but I found myself compelled to celebrate it at the end of the year anyway. There are few games that offer such easy access to joy, and I could use a few more of them.