Behind day seven of the RPS Advent Calendar stands a group of regular AI and NOTHING ELSE.

Matthew: It’s Spy Party and I’ll cry if I want to, cry if I want to. You would cry too if it happened to you. ‘It’ in this case being shot by a sniper who is watching the aforementioned shindig from across the street. To win the game, the spy at the party has to complete a list of objectives without drawing attention to their very human behaviour in a crowd of very non-human NPCs. It’s one of those clever asymmetric multiplayer thingies, which is a fancy way of saying 'you'll likely enjoy one role more than the other and grow to resent the time you aren't playing as it’.

I'm definitely a better sniper than spy. I find parties quite hard work to relax at when there isn't a laser sight swaying on my back. But trying to act with the drive and purpose of an AI is still a delicious bit of role-playing (and something I miss now that Assassin’s Creed ditched its excellent multiplayer mode). Would an algorithm stride in a straight line to meddle with those statue heads? Should I try and fake a glitch and walk against the side of a table? There is something hilarious in making these dumb calls and watching that laser dot instantly snap to your back. 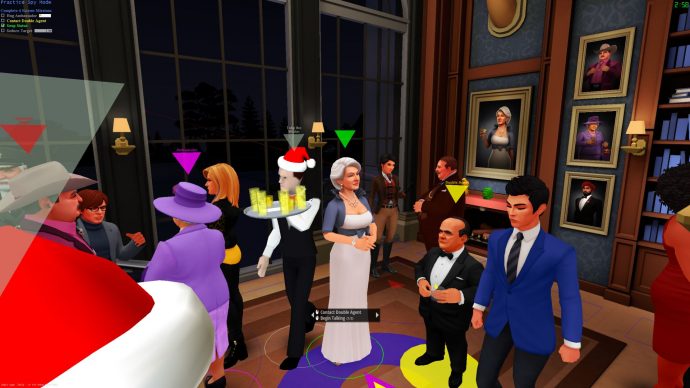 On the plus side, I like that the spy's secret code word to contact the double agent is 'banana bread’. This is because, 1) I like banana bread and enjoy being reminded of its existence, and 2) you can fake contact and say the phrase out loud to paint suspicion on another character and there is something deliciously grim about dooming a life with such a dumb phrase. You wouldn't hear it in a John le Carre novel, would you?

Spy Party is a game full of quirks like these - one of those ‘easy to pick up, difficult to master’ affairs. It's one of the few games that everyone in the RPS video department instantly took to, and I've grown fond of it as a team bonding tool (albeit one that involves more headshots than the usual trust exercises).

Play a few rounds and you'll start developing theories about which character models are more likely to catch the eye, and which parts of the room are best hidden from the sniper’s gaze. Alex's excellent mechanic column on the game talked about it in fighting game parlance, and it really does have that vibe of building a favoured strategy. Only instead of debating the value of Ken's dragon punch over Ryu's, you're pondering whether an old lady's big, purple hat is more or less incongruous than a dwarf in a tuxedo. Come on, of course this was going to be on the RPS GOTY list.

Alice L: I don't want to sound like I'm bragging but: I'm really bloody good at Spy Party. It's actually the only game I'm any good at being a hitman in, as I'm quite good at sussing out suspicious behaviour at small (virtual) parties, but less good at hunting an actual target down on a huge map without arousing suspicion. Maybe I should play Hitman how I play Spy Party? And then maybe I'd be actually good at it?

The RPS video team, AKA Team Lemons, have featured Spy Party a couple of times on the channel. One time where I went head-to-head with Noa and obviously thrashed her, and the other was during EGX, when we streamed for the first time ever. (Technically the first game we ever streamed was Human Fall Flat, but it was a weekend of first-time streams, so it counts.)

Spy Party is a great game to play with friends because being on both sides of the screen is thrilling. I do perhaps enjoy being the sniper more than the spy, but I think they both have their charm. Trying to act like AI is something I do well at in real life, walking into a room, awkwardly walking around it, and then bumping into things on my way out is a speciality of mine. So you can only imagine how good I am at it in this game, where you’re most likely to win if you act like a generated computer character. Did I mean to pick up that statue and put it down again awkwardly? Or did I actually just change it from a bird to a bust?

I’m also incredibly - but secretively - competitive, so winning a round of Spy Party feels absolutely magical - and as I said, I win often. I promise the reason I love this game isn’t just “because I’m good at it” but it is because I have had a lot of fun with this game this year. Banana bread.

Graham: We say every year that games are eligible for the advent calendar if they have been substantially updated and therefore feel 'of' that year. Spy Party qualifies. I think I first played it around seven years ago, when it was using placeholder human models and assets from The Sims. Its recent updates - the most significant of which includes six new maps - have made it newly relevant again. And if, like me, you hadn't played it much since those early years, you'll find it's now a beautiful, deep multiplayer game through and through.