It's taken a long time to get this far in the RPS Advent Calendar. We've conquered mountains, waded across rivers, we've even built some roads along the way. It's been a journey, but at least we didn't have to do it alone. So please get your holographic signature at the ready. It's time to take delivery of door number 18.

Katharine: Death Stranding was dealt a rough hand when it first came out on console last year. Looking back at its critical reception now, a lot of the words written about that game were simply baffled by the fact it wasn't the next great second coming of Kojima the unrelenting hype engine had led them to believe it would be. Instead, it was simply a game about moving boxes from one point to another, and no one could quite decide if that was intensely boring or whether there was a kernel of something special to be found lingering beneath the surface.

But if Death Stranding teaches us anything, it's that time and distance are great healers. If you were to boil it down to its simplest form, then yes, this is indeed a game about moving boxes from point A to point B. But what an act of moving it is. In Death Stranding, traversal is the game. From the way you load your cargo to the route you pick through its rocky, mountainous landscape, this is a game where even the tiniest change in gradient can send you tumbling to your knees, destroying your precious deliveries in the process. It's a game where the weather is your enemy, and where the sight of a road or a well-placed zipline can bring you to the point of tears. It is a walking simulator in the very best sense of the word, and I just couldn't get enough of it this year.

It's a game that makes you engage with the landscape of its world like no other, as even the simple act of crossing a river can be fraught with danger. You can't just charge toward your destination like Assassin's Creed or follow the road like Skyrim. Heck, you also can't climb up its walls with your bare hands like Breath Of The Wild. Instead, every journey must be planned and prepared for, balancing the tools you'll need to get the job done (ladders, ropes, and construction kits) against how much cargo you're able to carry.

After all, it's not just you you've got to look out for in Death Stranding. You've also got a small passenger with you, BB, who sits in a jar on your chest. BB is your lifeline in this strange, empty world, as they're the only way to sense where the world's deadly (and potentially explosive) ghosts are. These otherworldly beings are the reason why humanity has fled underground in the world of Death Stranding, as no one but porters are equipped to deal with them.

Death Stranding still falls prey to many of Kojima's bad habits. The opening couple of hours is nearly 90% cutscene, and the way it frontloads much of its lore and painfully on-the-nose character names and terminology is enough to make anyone reach for the uninstall button. But beyond that opening is a game truly unlike any other - and the deliveries are just one part of it. 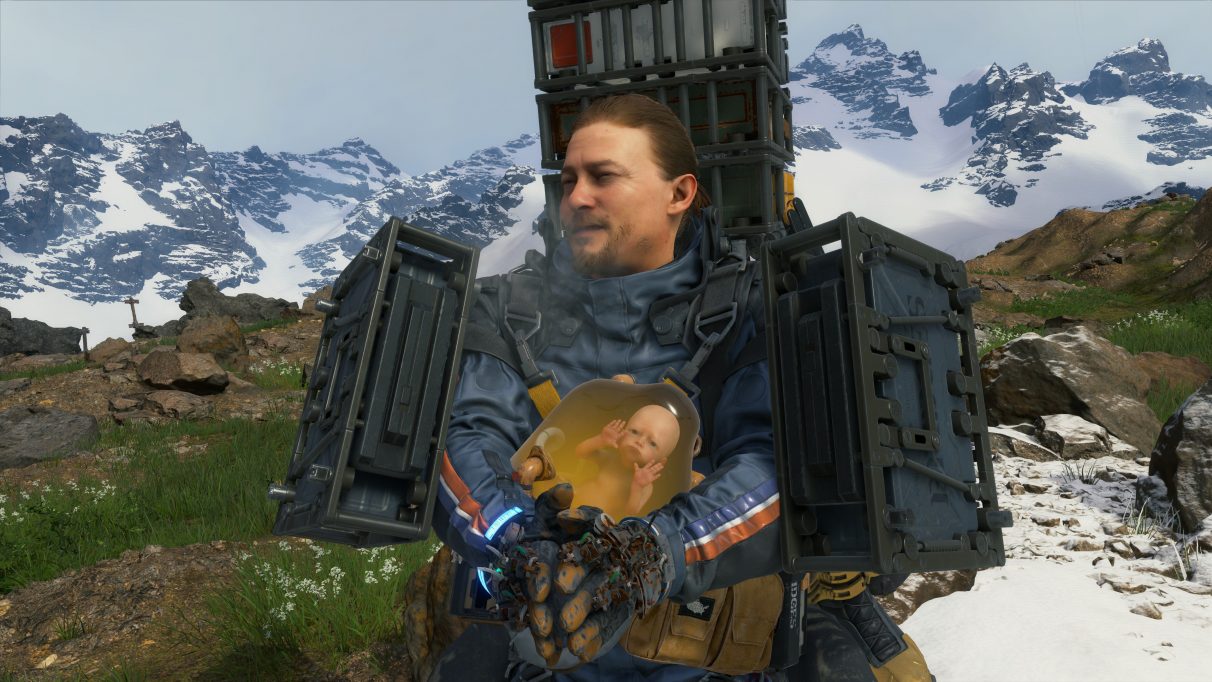 Ultimately, Death Stranding is a game about making connections. There are the literal ones you make in the game as you zig-zag your way across a broken (and very Icelandic-looking) United States to re-establish the 'chiral network' (a sort of proto-internet that got destroyed in the titular Death Stranding event some years back) that will bring its disparate citizens back together again. There are also the personal ones you'll forge between individual characters as you go about making your deliveries. Sometimes the two go hand in hand, as some bunker inhabitants won't agree to join the chiral network until you've done a few errands for them first to prove they can trust you.

But it's arguably the connections you make with other players that leave the biggest and most lasting impression. While Death Stranding is fundamentally a single-player game, its asymmetric online multiplayer elements will also see the work of other porters occasionally overlap with your own, whether it's a kind soul picking up and delivering a lost piece of cargo or a helping hand making a vital contribution to a big bit of construction while you've been plugging away at for your last few play sessions. I 'made connections' with just shy of 1600 other players, according to my end-game stats, which is actually a lot less than what I was expecting.

Most importantly, though, those who have gone before you don't instantly leave the world 'filled in' either. There's a bit of wibbly-wobbly timey-wimey logic involved, admittedly, but your first run at every new region you encounter is as pure and fresh as the untouched earth beneath your feet. It's only once you bring a bunker online that the world suddenly fizzes into life, the landmarks left by those early trekkers now visible on your map and in the world around you. I still had to put in a lot of work myself, mind, but lemme tell ya, using my ziplines to join up those left by other players in its hilly mountain range is one of my proudest game accomplishments of the year. I didn't even do it for the 'likes', either, which other players can award you for all manner of reasons. I did it because, deep down, these structures - these connections - are about paying it forward, and leaving a world behind that's worth living in for those that come after you.

This sits at the heart of everything you do in Death Stranding, a game about so much more than simply moving boxes from one point to another, and for this reason it's my personal PC game pick of the year. No matter how disconnected and disinterested you are in the world around you - a point protagonist Sam takes great pains to put across throughout the course of the game - we're ultimately all in this together, and it's only by embracing the weird quirks of others (and in turn the weird quirks of the game, with its sentient babies in jars, nuclear ghosts and all manner of supernatural nonsense) that the cast of Death Stranding can start to pull themselves together and build a new life from the ruins of their mistakes. Yes, it might seem strange and ridiculous to have a baby in a jar strapped to your chest, but I'll be damned if I didn't end up loving BB like they were my own child by the time I reached the end credits. Death Stranding is a strange, odd and yes, at times baffling game, but open your heart to it and you'll find there are plenty of reasons to smash that 'like' button and love it just as much as I did.