Before we head through door 22 on the RPS Advent Calendar, do check you've put fresh batteries in your camera. And you've got all your lenses? And you're sure the mech battle is over? Alright, let's go.

Alice0: Umurangi Generation is a first-person hidden object game, really. Your mission: go to these places, find these things, and photograph them. You'll have to get creative for some objects, finding the right position and photographic trickery to get them together. That's largely fun. I like finding stuff, and I definitely like playing with cameras in first-person photography. It's a nice chunky camera too. Oh, also, the place we're photographing is a Jet Set Radio-esque futurecity occupied by UN forces with Evangelion units in a world threatened by nuclear strikes.

It is a hell of a place; colourful and exciting, and often somber or downright apocalyptic. So sure, an entire city block might be locked inside vast emergency barricades while a UN cleanup crew deal with the severed hand of a mech presumably lost in battle, but just round the corner the kids are holding a street party. There's a weird energy to living through the run-up to the apocalypse. And in the game, wahey. The future might not even happen but the kids are still fighting for their ideals and living right now. Umurangi's DLC, named Macro, makes the struggle feel all-to-familiar from today with its tear-gassed street protests, even while it also invites us to tour an Eva hangar. I very much like the fragments of daily life sitting against the backdrop of world-shattering disaster.

Great soundtrack, by the way. Just lovely. The game exudes confidence with its striking look and sound. 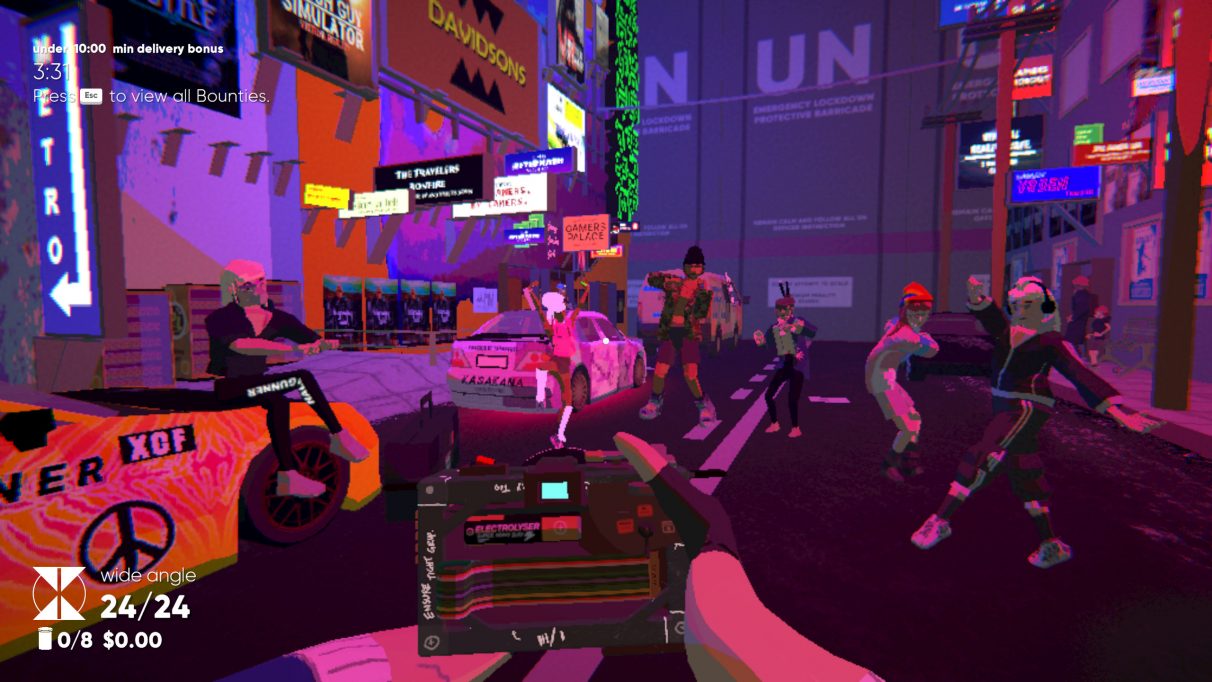 Umrangi Generation encourages us to be playful and creative with photography too. Lens options and filters are fun to play with, and give a lot of scope to create interesting images. Lovely. The object hunt can be fiddly, mind. Sometimes it's not clear why I'm not meeting objectives with photographs I really think should work. This combined with the timer (used only for bonus objectives) does mean sometimes I'm so busy scrutinising the environment for objectives that I can miss the bigger picture on my first visits. A shame.

That said, the game doesn't end when I've found everything. I've certainly revisited levels to take in more of the world, find details I'd missed, and take some better photographs.