The lock on this door of the calendar is very complex but aesthetically pleasing. 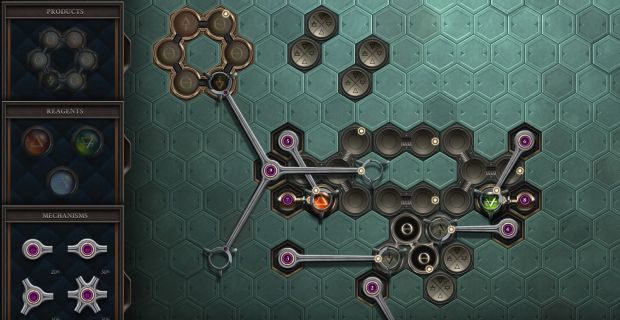 Brendan: Ah, the sweet ego-boosting hit of the Zachlike. There are plenty of puzzlers that make you feel clever for solving a fiddly problem. But this free-form alchemy engine is something special. You shift elemental marbles around with mechanical grabbers, bonding molecules together to create potions or hair gel or invisible thread. At one point, you are asked to create viagra (secret: it’s mostly salt).

Zachtronics games have a reputation for being difficult – the pastime of programmers and engineers. In many cases, that’s justly deserved. But here the machining is mostly straightforward. Later levels can take a lot of thought but there’s always a way to muddle through with trial and error, to hack together some brute of a contraption with more moving parts than should be necessary. In the end, you stand back from your wobbly, imperfect solution and think two things. First: This is very smart. Second: This could be smarter.

Matt: The best thing about Opus Magnum is that every solution is yours. Nobody else has combined pistons, tracks and calcifiers to make a stain-remover that’s gloriously wonky in the exact same way as mine. Other puzzle games might have multiple solutions that trick you into feeling like you're being creative, but at the end of the day you’re still following in the footsteps of a designer that’s laid those paths out for you. Opus Magnum gives you some tools, tells you what it wants you to make and leaves you to it. There’s no better way to feel like a genius, and unlike other Zachtronics that I’ve bounced off, this one’s accessible enough that I can get in on that too.

Graham: I've never got into any previous Zachlike, finding them fiddly or simply unappealing. I was convinced to try Opus Magnum because, after each solved puzzle, it has a menu button that lets you output a GIF of your solution. This is the most clever thing about the game. Its puzzles have aesthetic qualities beyond their success or failure as solutions, and the game recognises this by making them easily shareable. So when lots of my friends started playing the game, I started seeing lots of satisfying loops showing swinging arms and pumping tubes constructing unusual shapes. They were hypnotising. I had no idea what these clockwork contraptions were doing, but I didn't care: I wanted in.

To the game's credit, getting into it is as easy as those GIFs are pretty. The tutorial breaks down the concepts swiftly and the puzzles are framed by a story that's simple and sweeps you along. Even the game's options screen has some story dialogue to click through. I am not good at the game, but I could still muddle through most of its puzzles with inefficient designs, and when I decided to get better I did so by picking one of the earliest puzzles and playing it over and over again to improve my rating. I spent around six hours re-playing a single puzzle, entirely content.