A year ago or so, I re-downloaded The Sims. My partner and I wanted a low-effort game to play together, and I introduced them to the life-changing videogame craze: “Make yourself in The Sims and live the life you’ve always wanted!!!” We made ourselves, built a beautiful little home, and adopted a cat. I became a professional writer or something, and they went into the “Music Industry.” We sputtered and blustered when our Sims declared to us, through the magic of in-game whims, that they wanted to get married. I quickly red-X ousted those desires from our Sims’ minds. Instead of acknowledging their desire for wedding bells, I had our Sims adopt a dog. That sinking feeling remained, however, and much like the incisive qualities of predictive text and pre-cog algorithms, I began to question how serious our relationship was. Let me repeat: The Sims made me reevaluate the seriousness of my very happy and committed long term relationship with its terrifying-yet-compelling simulacra. Y’all. This game is haunted.

Hear me out: how many Sims have you murdered? How many Sims have you left wiling away in Purgatory, still waiting for their omnipotent creator to tell them what to do? The last time you closed The Sims, did you know that it would be the last time? How many Sims do you still have left to create inside of you, born fully-formed, like Athena from Zeus’s skull, ready to troll teh forums? Could it be that The Sims are always-already there, alive, allowing us to live through a nostalgia for lost futures? Lost presents? Is The Sims the most haunted game in the world?

It is difficult to deny that there is a spectre of The Sims haunting the games industry. I feel like no one talks about The Sims much, though we all agree that it is there; a massive, thriving, thing in the corner. (Beautiful outlier Gita Jackson, however, at Kotaku, is doing the Lord’s work in her Sims coverage, and recently mused about the game’s curious status as silent giant.) I often tell my students that The Sims is everyone’s favourite videogame, and anyone who says otherwise is lying. I have lost countless hours to The Sims over the course of my lifetime, and I bet that you have, too. Much like the weather, I feel The Sims is a thing we all have in common.

Walk with me down memory lane, won’t you? The Sims first came out in 2000. I still remember standing in a 2001 Costco, holding the saran-wrapped game in my sticky nine-year-old hands. “You can have a pool in this game,” I whispered to my brother, in awe. Since its release, The Sims has sold 6.3 million units, and was, until at least 2015, the best selling PC game of all time. The franchise as a whole has sold over 200 million copies. There have been over 100 expansion packs, game packs, and “stuff packs,” and several ports and mobile versions (though its PC version reigns supreme). There is a vast community of modders, YouTubers, and fans who have dubbed themselves “Simmers,” and a significant majority of them are women. (In 2006, the president of EA boasted that The Sims had managed to corner the “woman” market, calling them “gaming's most elusive group of consumers.”)

But… like… what is The Sims? Dartmouth-based play theorist and researcher Mary Flanagan suggests in her 2012 book, Critical Play, that The Sims is the most recent evolution of dollhouse play and has comparable roots in absurdist artistic movements, like Dada. I find Flanagan’s line of inquiry compelling, and it gives The Sims an academic validity in its arthouse traditions. On the other hand, when my Sim has peed herself for the tenth time as I desperately try to teach her how to code before she dies of old age so that she can become a “Renaissance Sim,” I wonder what Salvador Dali would have thought about my beloved pastime. Would she, too, make an exquisite corpse?

People love to kill their Sims; I would be remiss to not mention this fact. When I started drafting this piece, I asked everyone I knew what they loved about the game. The answers ran in two camps: aspirational and murderous. “I love the clothes,” say some. “I love to make horrific Skinner boxes which question to what extent programmed-humanoid-pathing can be treated with the same reverence of human life,” say others, before removing the ladder to their pools. And so, when I say that The Sims is haunted I have to clarify: I do not mean that it has been the site of innumerable murders. Rather, The Sims is the site of too much, overwhelming amounts of, life.

True, I have loved to murder my Sims. More than that, though, I have tried to live lives I know I am incapable of living: Perhaps, instead of who I am, I am a private eye. Here I am, in this bizarro-world, owning a mortgage-free home. Maybe next I will be a powerful matriarch, surrounded by fat grandchildren. Maybe one day I, too, could bone the Grim Reaper. There are so many people my Sims have been in this storytelling machine where my future is vast and endless instead of what it is, which is what it is. And frankly, imo, it’s pretty rude.

So, I tried to break The Sims. Not any one individual Sim, but the Sims itself. I didn’t want to overload the game with mods until it sank under the weight of itself, or implement some #100BabyChallenge or $10k starter home. I just wanted to see what made the game tick in the way that it did to irk me in this particular way.

One of my favourite YouTube series comes from Bon Appetit magazine, called “Gourmet Makes.” It follows a brilliant, frazzled pastry chef, Claire Saffitz, as she tries to deconstruct popular food into its core components so that she can make them from scratch through several fierce rounds of experimentation. It is honestly riveting. She takes Cheetos, Oreos, and Instant Ramen to task. I want, in some way, to do Claire Saffitz proud. How could I break the Sims down into its very core components, to see what made it work, so that I could build it back up again into something seemingly new and delicious?

I tried for many days to try and make The Sims do something interesting for me, to marginal success. “Is this it?” I asked my PC in prayer. “Is this it? Is this finally it? Is it broken, yet?”

First, I removed their walls. 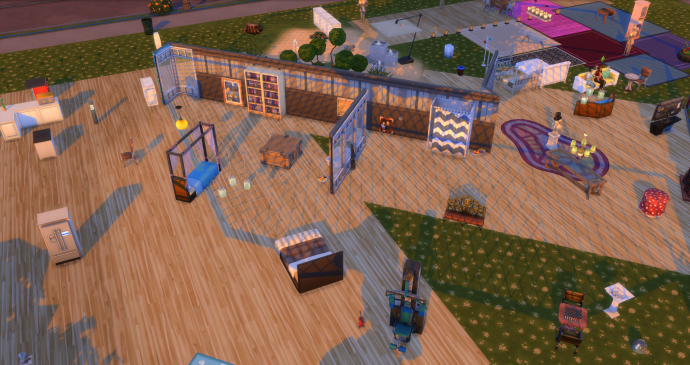 I thought that if I so supremely destroyed a Sims’ concept of "house," the game would do something weird in retaliation. Surely there would be some response to a house with only a rudimentary understanding of what a “house” was meant to be. I mean, their primary means of shelter is a tree, for god's sake. 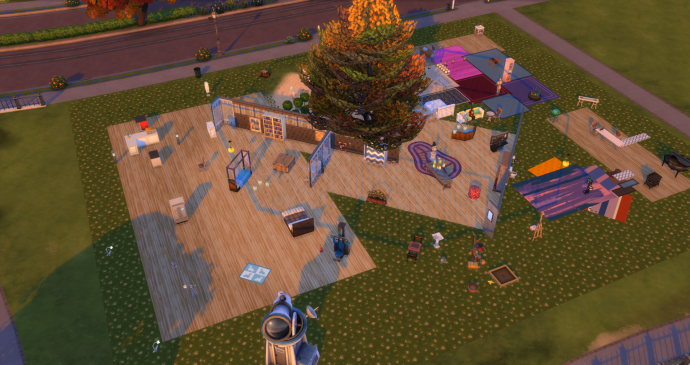 Yet, despite this horrible-home infliction, my Sims were nonplussed. They were, in fact, fairly cheery about the whole ordeal. They mostly did two things: they made burgers at the grill and ate them at the sofa nearest the television, or they danced together at the radio. For all they know, this is what homes are like. Who are they to question me, their creator, who has endowed them with such vast luxuries? 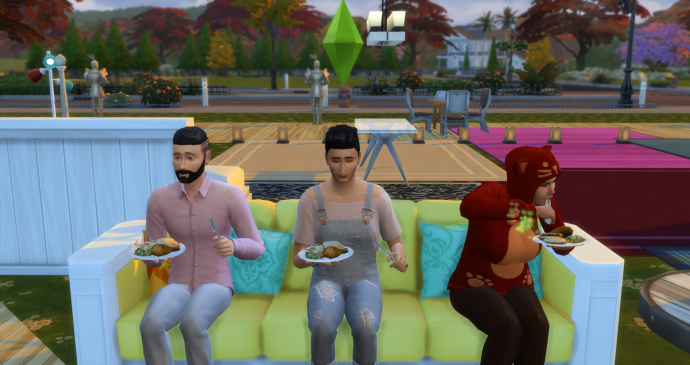 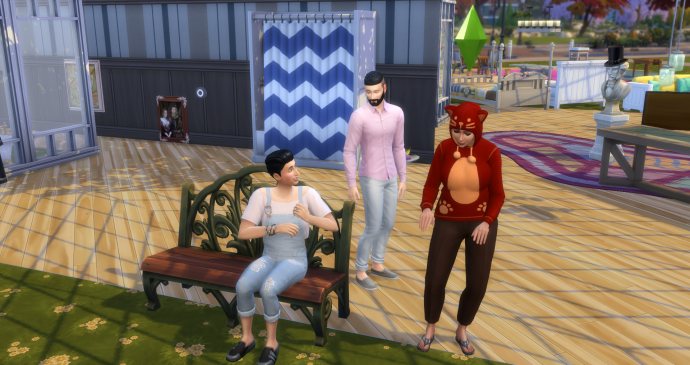 So, fine. I started from scratch. In my second attempt, I made too many walls. Four towers, and atop each one was a small room which contained a Sims’s requirements for living: kitchen, bathroom, living room, bedroom. 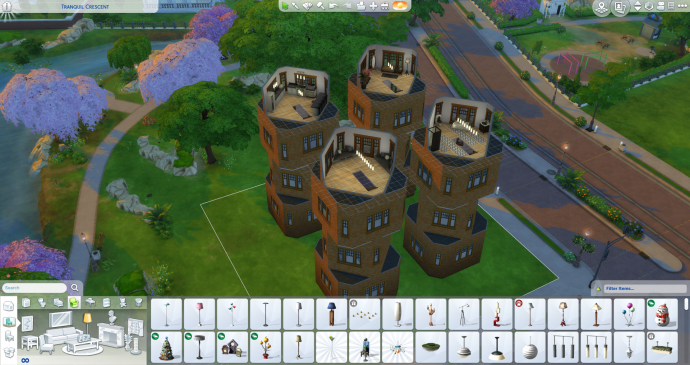 Almost immediately it became apparent that they didn’t care. They loved it. They had a roof over their heads, and food on their plates. And bonus: all those stairs were wonderful cardio! So what if their home was four discrete four-story towers? It had a flat-screen television! 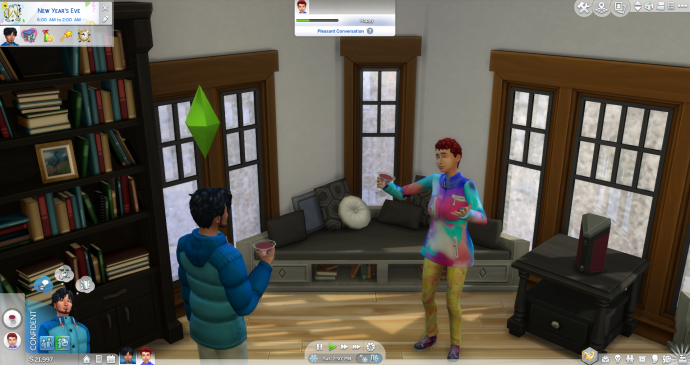 Okay. Sure. I carried on. This time I built a house inspired by an old church, and I intended to fill it with the ghosts of as many Sims as possible. A Sim moved in, and I gave him a full life with a slowly expanding family: from Ramiro to Ramiro and Barbara to Ramiro and Barbara and Myron. 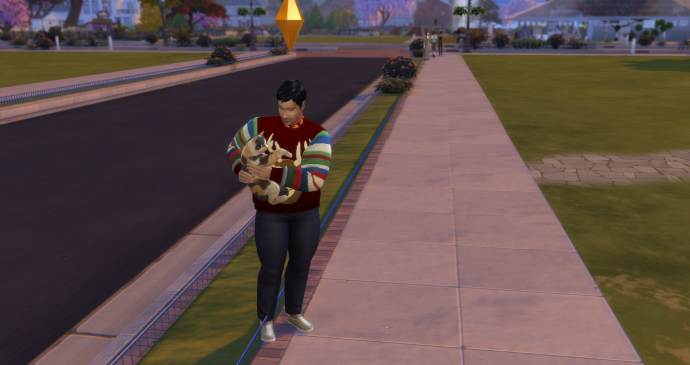 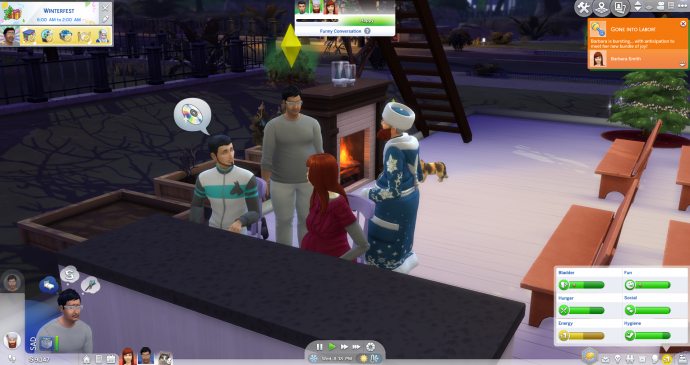 Everything was going according to plan. They were a happy family, living in an old renovated church which surely wasn’t haunted at all. As the days crept by, Myron grew up. Romano and Barbara read to him. They lived their little Sim-lives. I was eventually told through the game’s user-interface that soon, Barbara would die of old age. I was ecstatic. 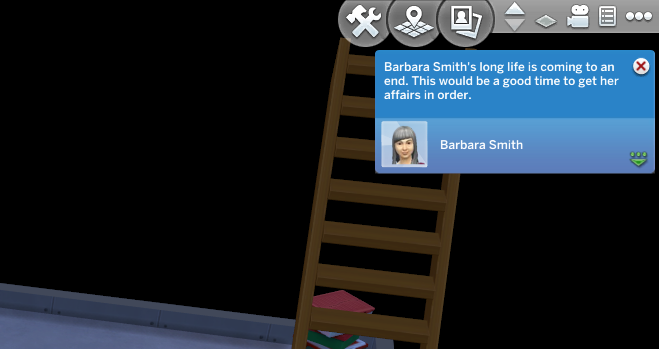 This was it. I prepared for her death, eager to see what ghosts would appear out of her demise. She sat down to have one final meal with her son, Myron. 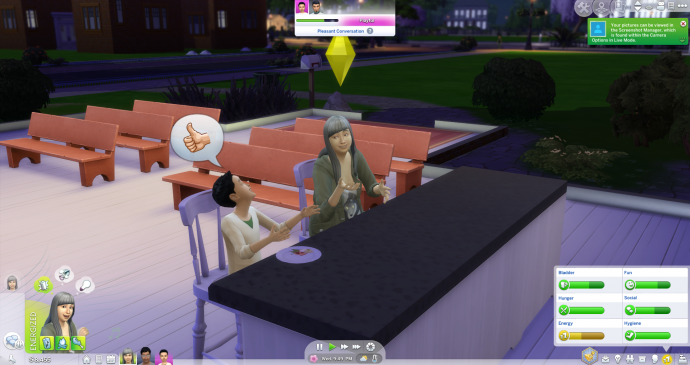 And just as Barbara was slated to die: she glitched out. 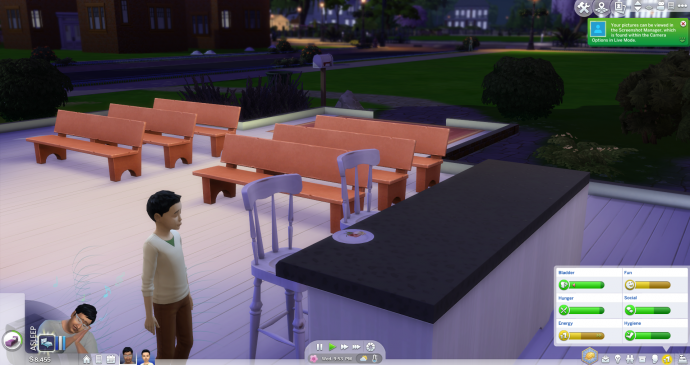 She’d died in the most anticlimactic, frustratingly appropriate way that the game could have possibly thrown at me. She just disappeared. She disappeared, and without so much as a peep, Myron trundled off to bed. 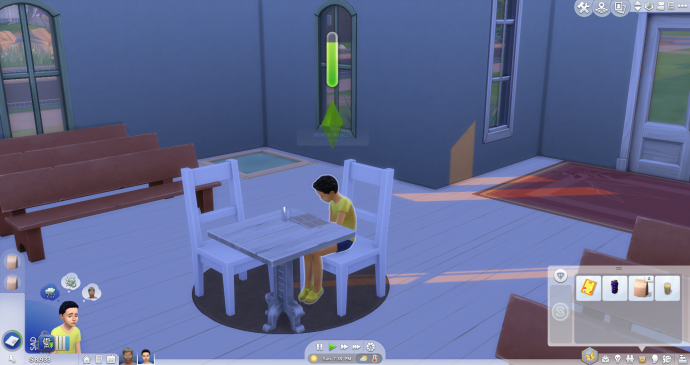 I was furious. I wanted to destroy the Sims from the inside out, experiment with their very essence -- as they had done with me -- and make something horrible out of it. I wanted Sims to die, to haunt the homes I had made for them, right down to the bedrock. I made towers which went nowhere, I put stoves too far away from fridges. I gave them lives, I took them away, and still they thwarted me -- always unimpressed with my divine intervention (plea?) to do something bizarre. I hadn’t wanted stories, I hadn’t wanted cute interventions or dreams and aspirations. I wanted the game to do something for me, and to be honest -- I think that was my mistake.

If The Sims has anything at its core, it’s a ghostly perseverance: the game carries on, no matter what. There is no win condition, no end-state. There is only death, or exhaustion.

In some cases, this make-your-own end-state has been championed in The Sims: you decide when the game is over! Make games from your own life, and you, too, can win! At a point in time where control over one’s own life seems inaccessible, there is an element of this which is freeing. There’s something paralysing about it, too: this expectation that we must make our own futures, our own end-states, our own meaning. There is nothing in The Sims which resembles anyone’s current lived experience, and yet, the game presents something which is so like our idea of lived experience, that we put our selves into it. Homeowner. Matriarch. Secret agent. Professional writer. Fitness guru, needs explicit, transactional relationship building, Grim Reaper boner. We have put our stories, our aspirations, and our time into The Sims over and over again, this multimillion dollar multivalent meaning making machine. And I will again. Again and again and again.