As I wrote in my review of Resident Evil 3, one of my favourite things about the game is the level of detail that's gone into making Raccoon City feel like a real place, despite all but a few streets of it being mysterious blocked off by walls of rubble and trashed police cars. It's a strangely generic location, with that faint sense of white-label, delocalised Americana that often comes about when a Japanese production team sets something in the USA. If you had a dream set in "an American city", your mind would come up with something like this place. But just as in a dream, when you start to look at the details, things get a bit weird. I'm going to take you on a quick tour of Raccoon City's downtown, where the first act of RE3 is set, and show you some of my favourites. Keep up, or the bin bag man will get you. 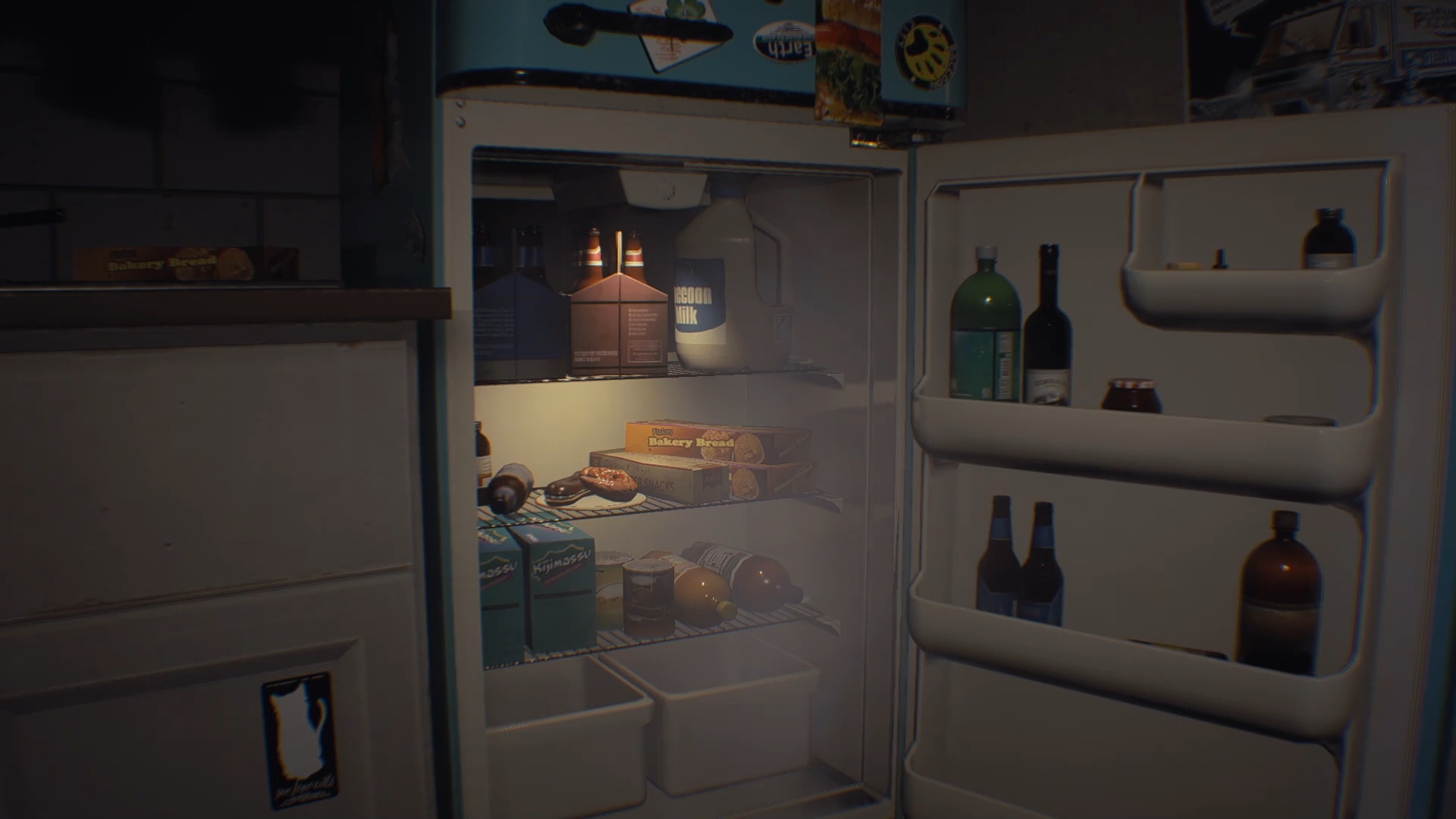 Let's start with Jill Valentine's fridge, which you can have a good rifle through at the start of the game. We can see Jill is well into beer, and newsagent-brand fizzy drinks, with a bit of wine and a jar of jam for good measure. She also keeps unopened canned goods in the fridge, presumably for if she wants a nice glug of chilled beans in the dead of night. There's two boxes of "flakey bakery bread", which looks like no bread I have ever witnessed, or care to witness, and then the crown jewel: a massive, refreshing bottle of "raccoon milk". It really says something about the constant zombie crises afflicting this town, that none of the Resident Evil games have ever had time to address the underlying horror of the place - the fact that it's built around a dairy where weird bin animals are milked. 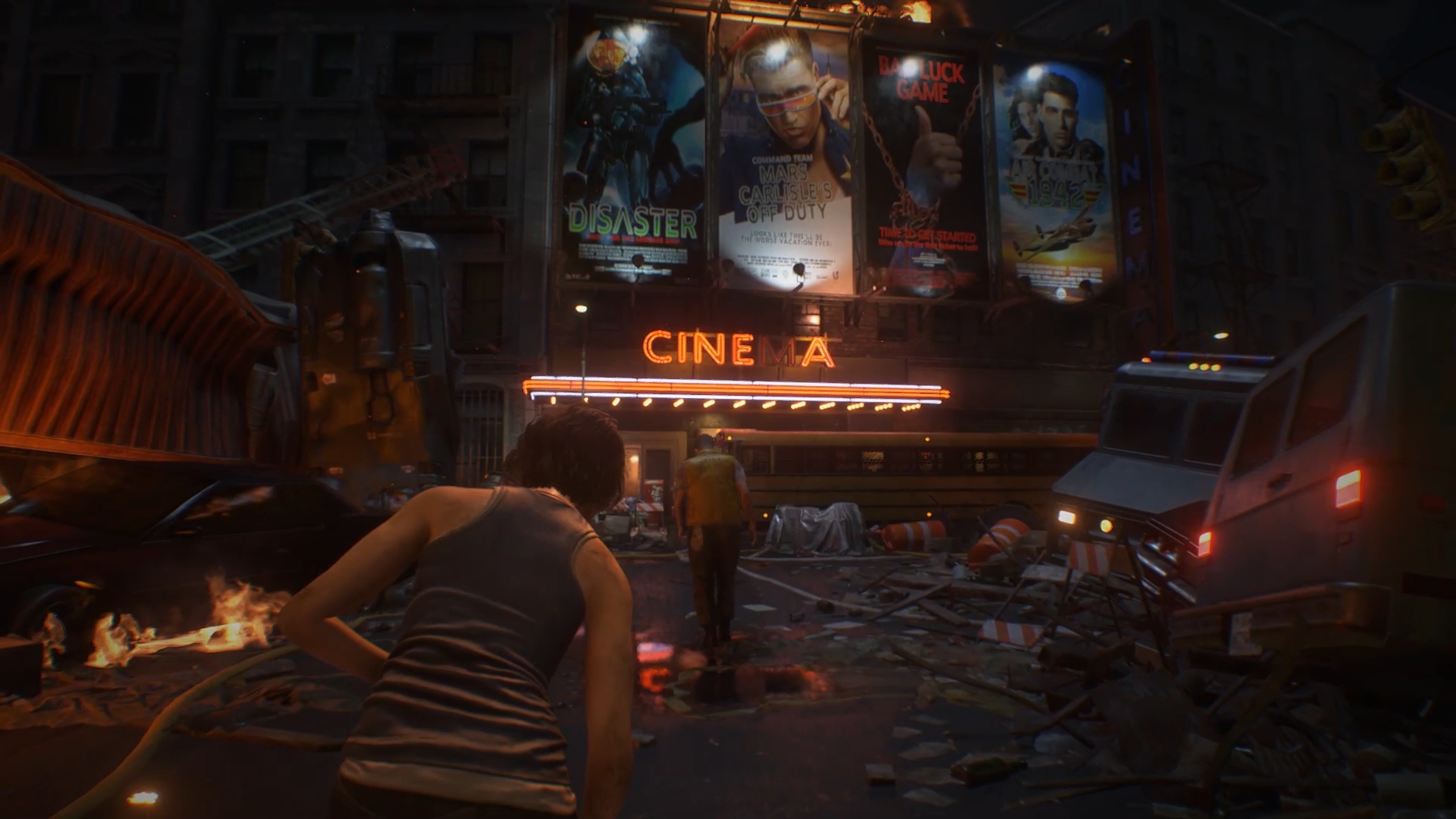 A trip to the movies now, as Jill scampers past the local cinema in the depths of the outbreak. 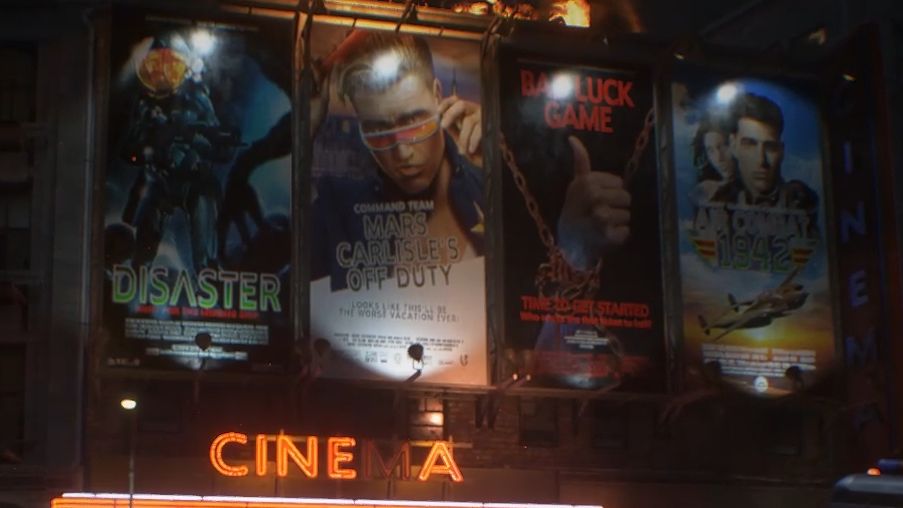 Mars Carlisle's Off Duty seems to be an adaptation of a Chuck Tingle novel, going by the poster, while Disaster and Air Combat 1942 seem pretty self-explanatory. My pick, however, is Bad Luck Game, which from the poster image of a thumbs-up bound by chains is either a sort of knockabout comedy based on the Saw franchise formula, or... I dunno, some kind of weird riff on the end of Terminator 2? I want to see it. 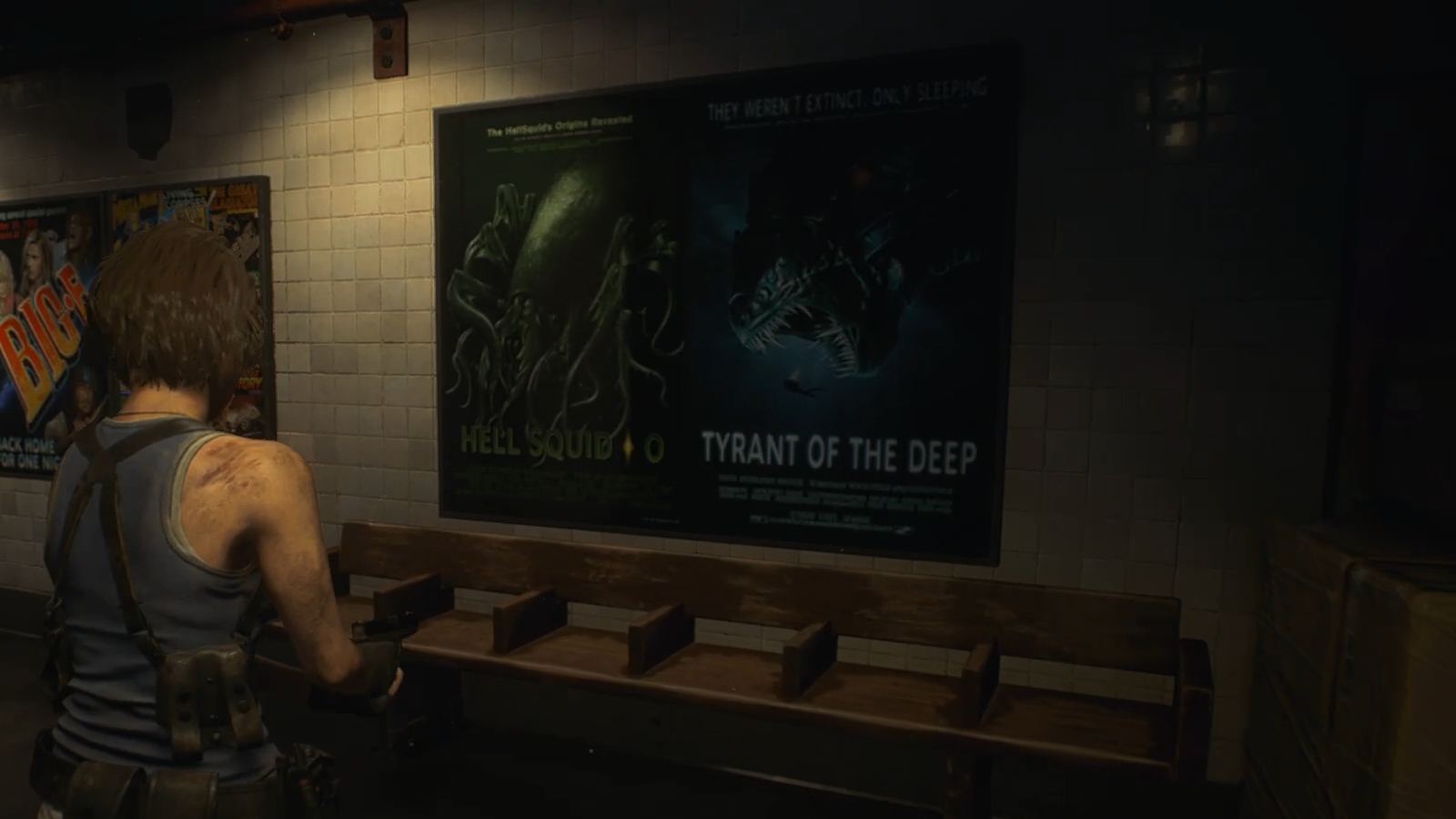 Not as much as I want to see Hell Squid 0, though! This prequel to the Hell Squid franchise promises to examine the titular mollusc's origins, which is a tantalising prospect. Clearly, nautical horror is a big deal in Raccoon City, as the poster's neighbour advertises Tyrant Of The Deep, which is about some sort of cross fish. Good stuff, and again, I'd watch 'em both. 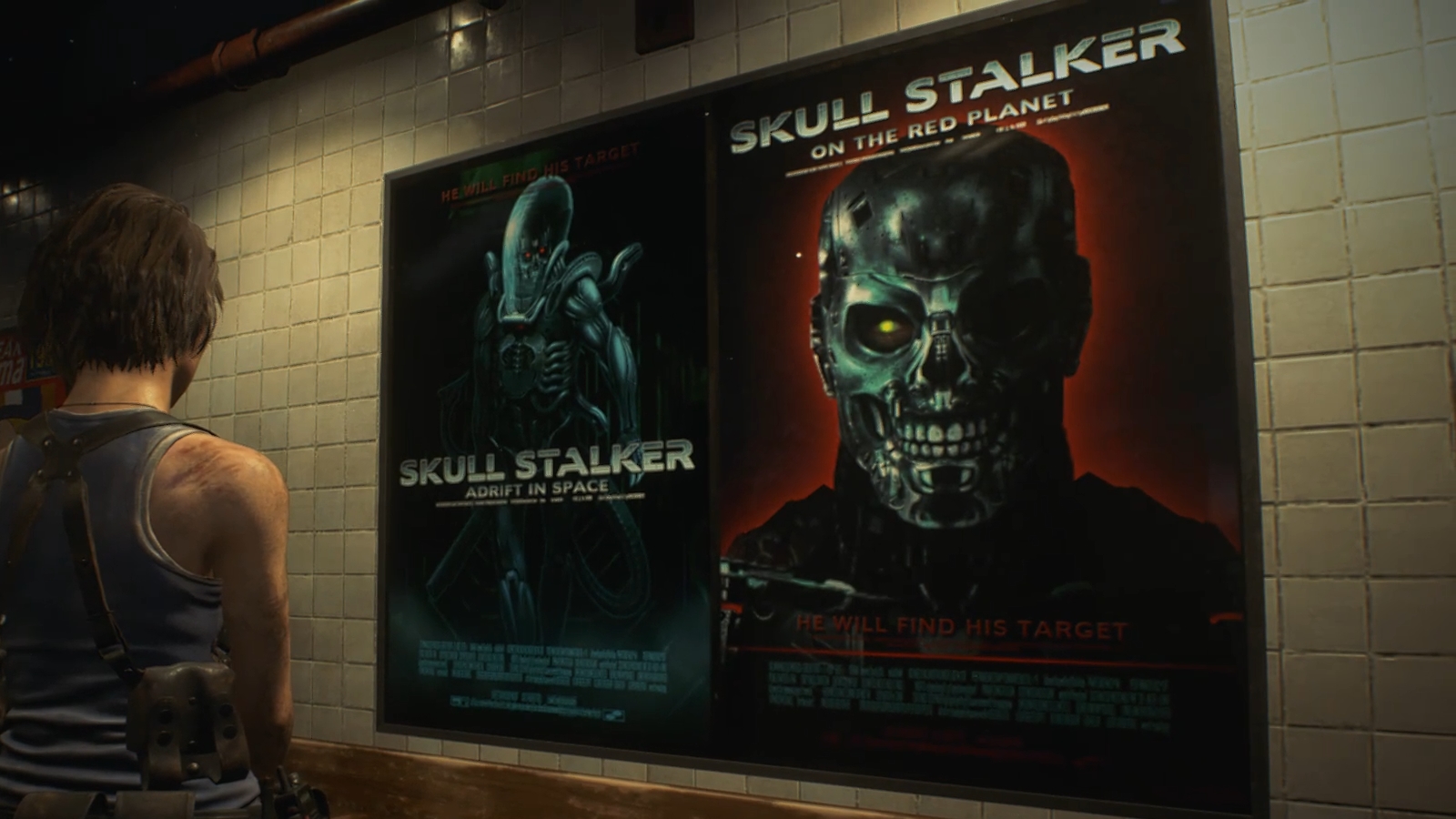 I think my favourite in-universe movies, though, have to be those of the Skull Stalker franchise. Partly, I love the fact that the one on the left manages to rip off both the Alien and Terminator series in one image. But more than that, I love the fact that Skull Stalker movies clearly come out so often, that two are being advertised at once. Clearly none of them beat even Mars Carlisle to the big screen, though, so I'm guessing they're all straight-to-video classics. 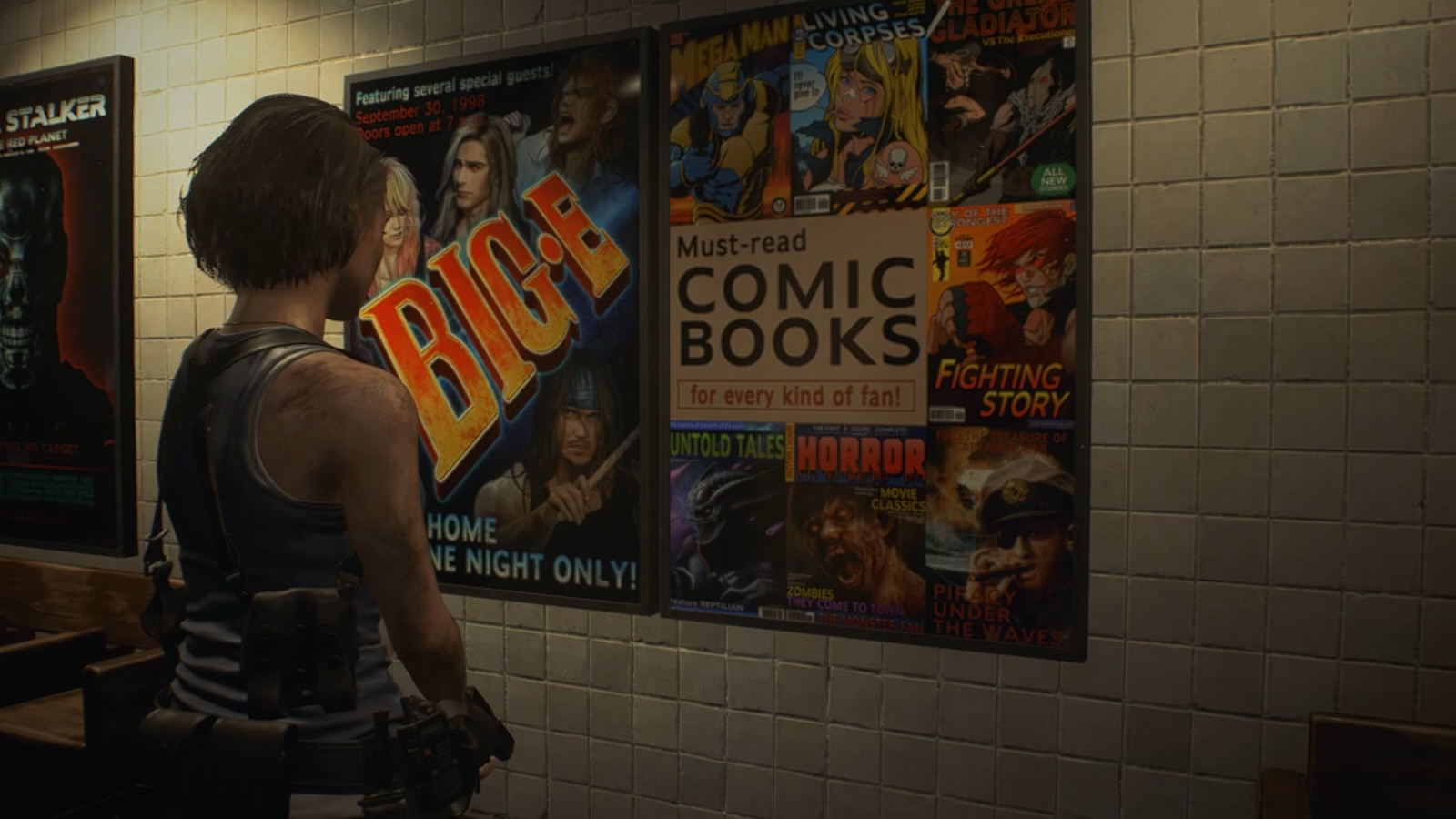 I don't know what kind of event Big E is, apart from some sort of communal MDMA extravaganza, but I'm well into these Must-Read Comic Books. The comic Horror bears the superb tagline "Zombies: they came to town", which makes for a decent summary of the game it appears in, while Fighting Story: Way Of The Strongest is what I'm going to call my autobiography. I'm a big fan of Piracy Under The Waves, which appears to be about a man antisocial enough to smoke aboard a submarine, but my favourite of the lot is The Great Gladiator (VS The Executioner), a title positively dripping with pound shop Conan energy. 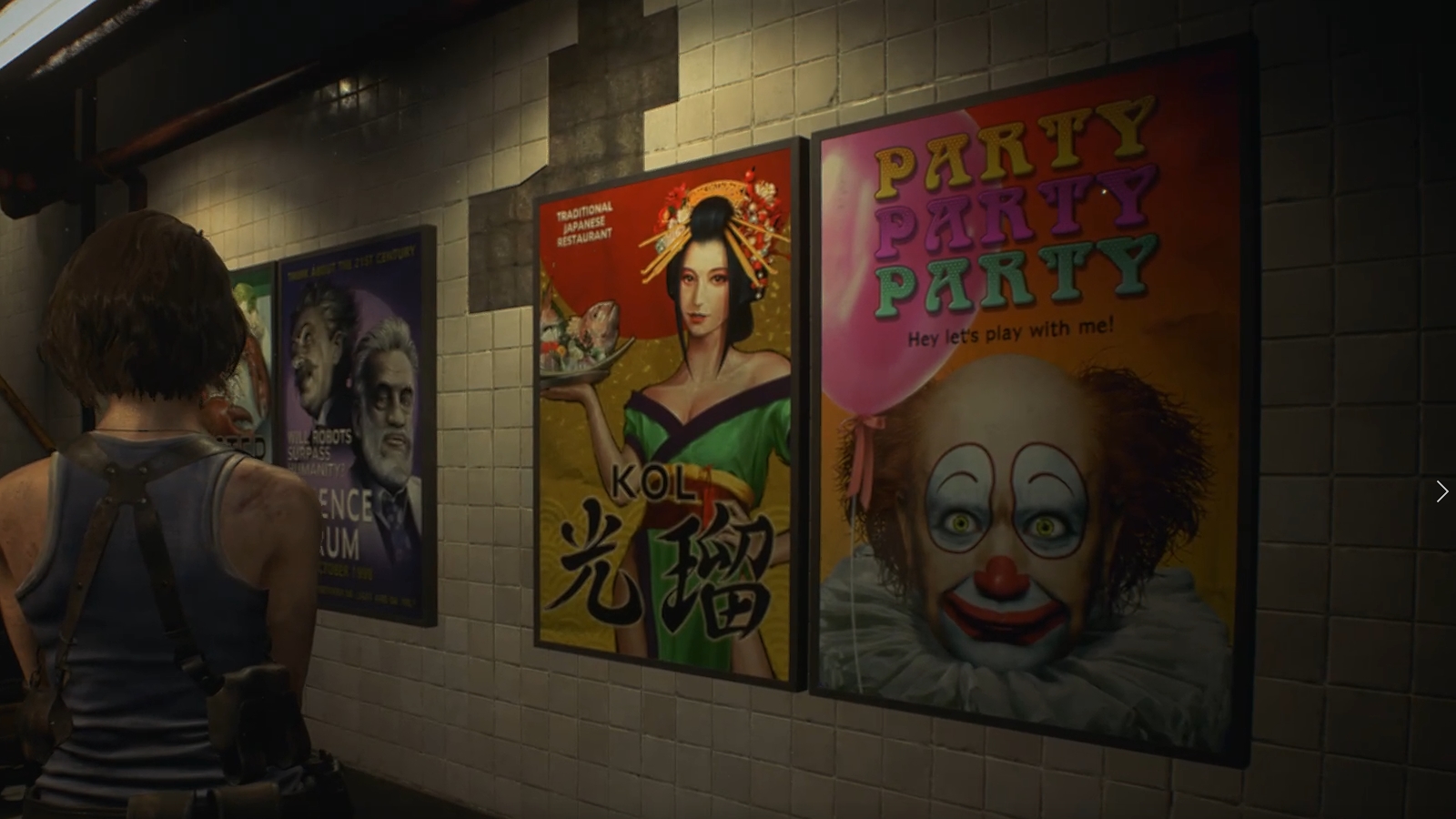 OK, what the fuck, Capcom. Let's ignore the restaurant advert and just get straight to the elephant in the room here. What the hell is Party Party Party all about? I do not like it one bit. I think what unnerves me most isn't the staring eyes of the clown, or the 70s disco font of the text, or even the tagline "hey let's play with me!". It's the fact that the poster doesn't seem to be advertising anything. So it's either some sort of chilling viral campaign, or... is this a poster for a mayoral election, maybe? If so, I'm glad Raccoon City got levelled by bioweapons, before it could put that bastard in charge. 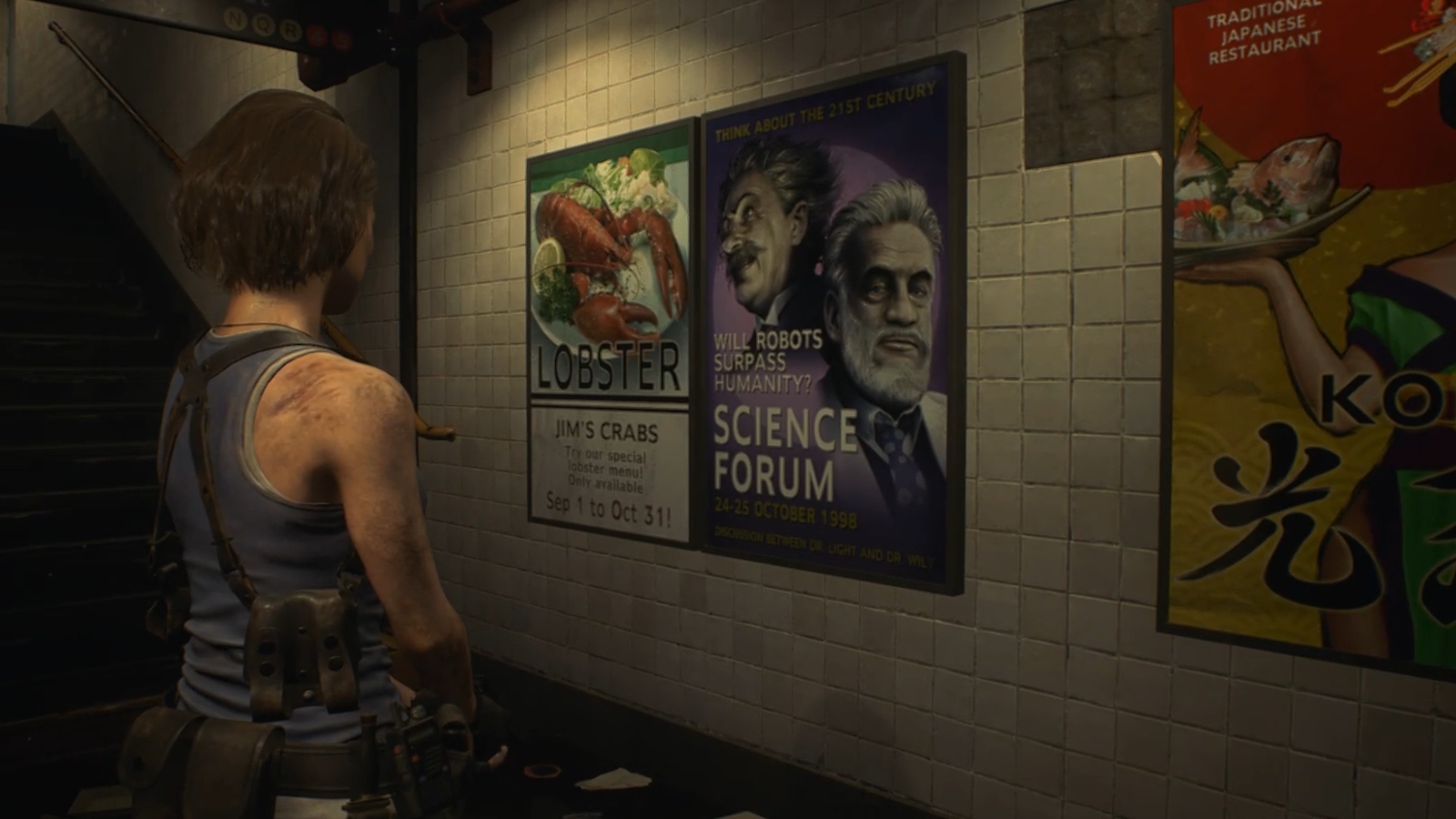 Jim's Crabs is such a refreshingly honest name for a business. Which makes it a bit perplexing that they've chosen "Lobster" as their starring dish here. Still, I appreciate the absolute, primal bluntness of this advert: there's absolutely no mistaking what it wishes to make you aware of. Unlike Science Forum, that is, which seems altogether more opaque. Who are these two mauve-tinged geniuses? Will robots surpass humanity? And must I think about the 21st Century? 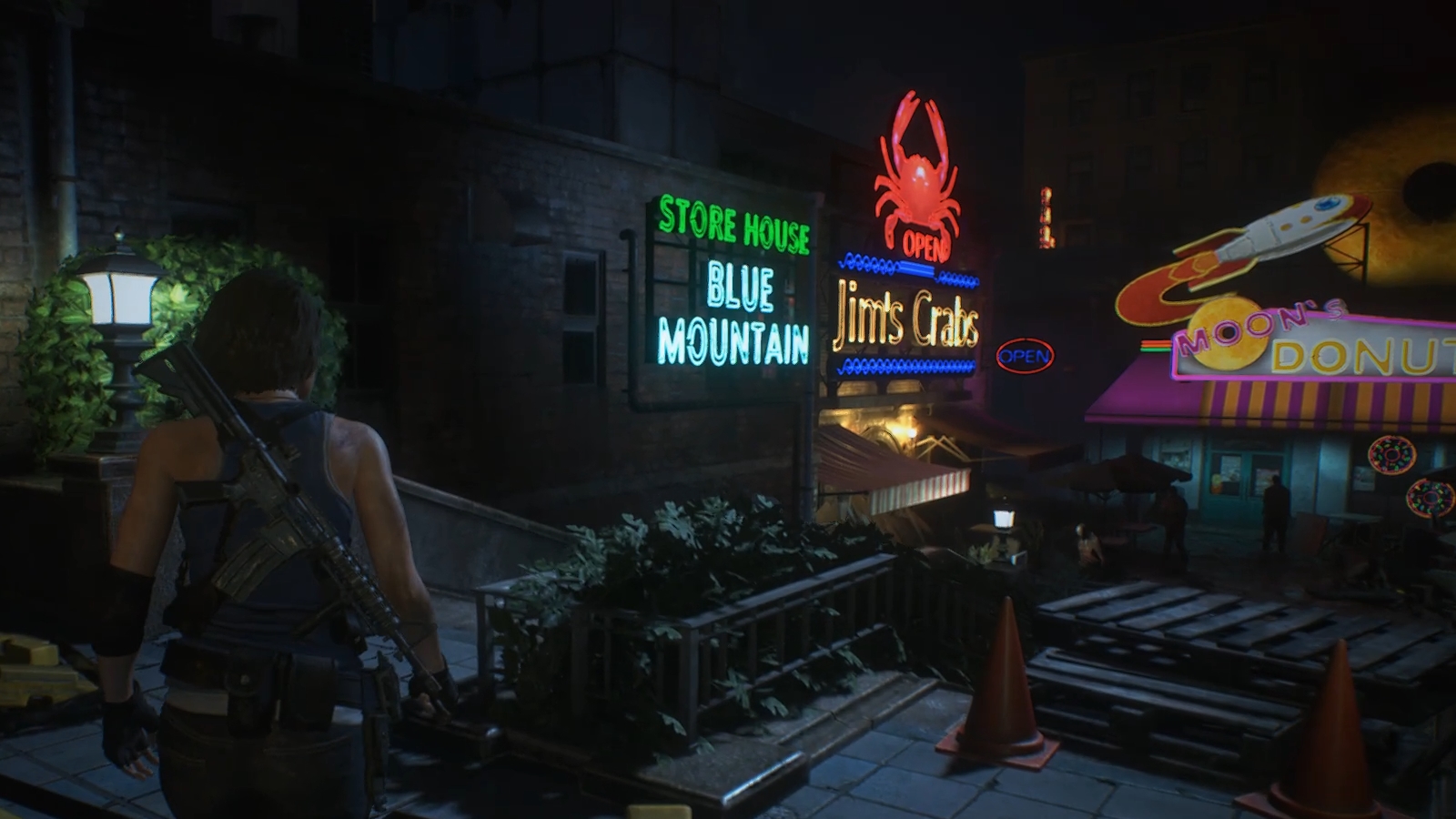 Aaaah, excellent. Jim's Crabs, in the flesh. And open too, despite the zombie crisis! I did try to go in and look for crabs and/or lobsters, but alas I had no luck. Big shout out to Blue Mountain Store House too, which manages to tell me nothing about its products or services, other than the fact that - like every other business in this city - it adores the neon light aesthetic even more than the ten thousand small game studios trying to cash in on cyberpunk fever. 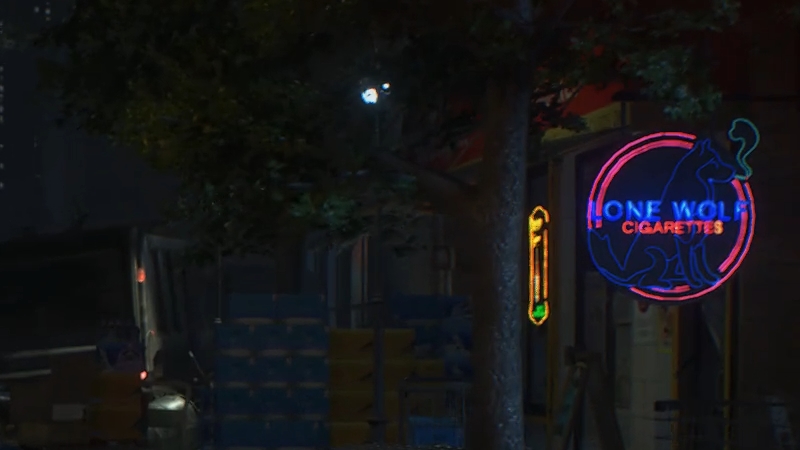 Perfection. The logo for Lone Wolf Cigarettes is... a wolf, having a smoke. Is that why it's alone? Is it standing outside a restaurant while the other wolves enjoy their desserts, huffing dismally away on a headache stick? Or is it the pet of the submarine captain from Piracy Beneath The Waves, and just smokes because everything on that accursed boat is forced to. Who knows. 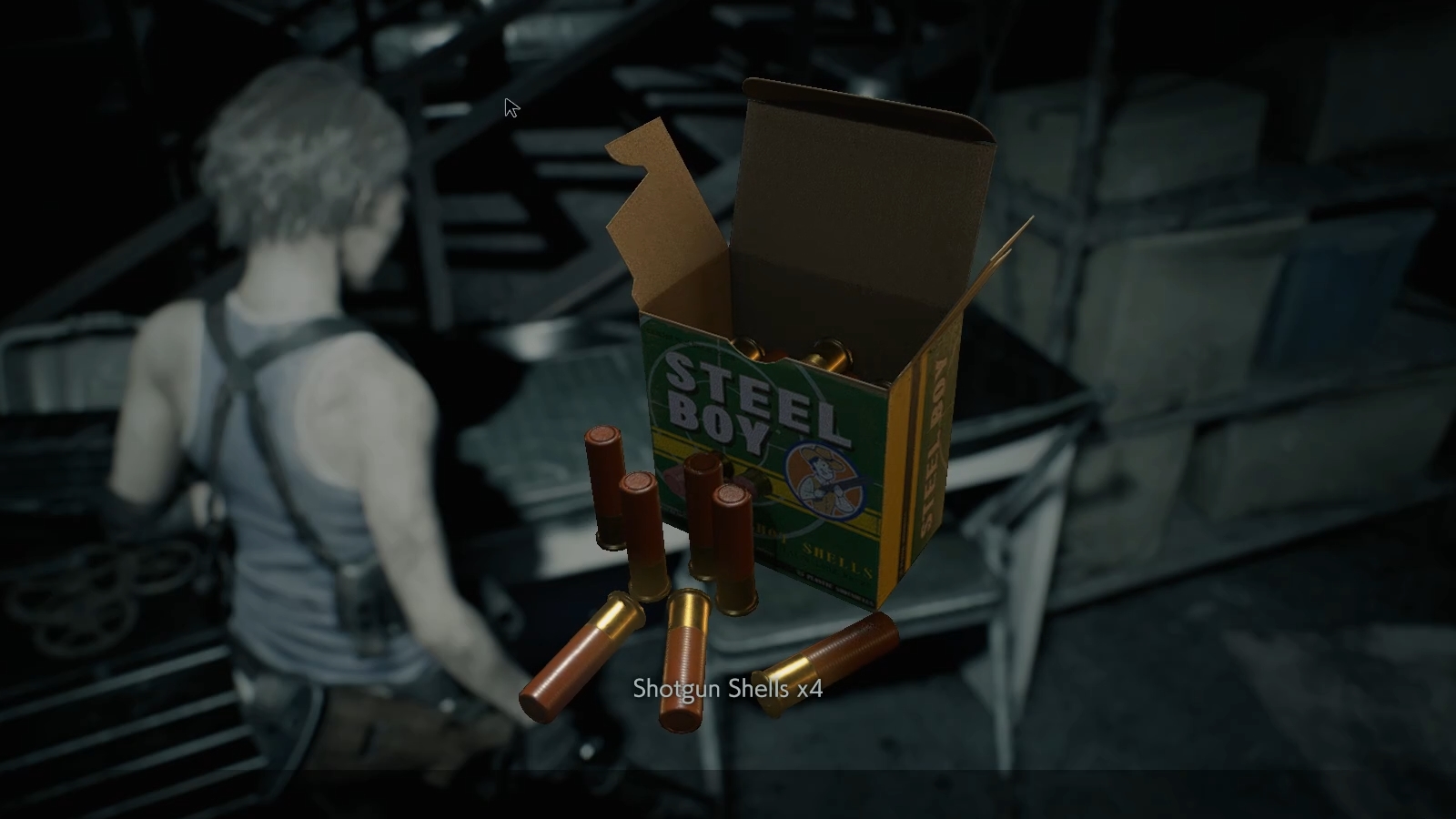 I'm in awe of Steel Boy as a brand of shotgun shells. It sounds a bit like a really passionless, high-end sex toy, but also like what I might call a car if I temporarily forgot the word "car". 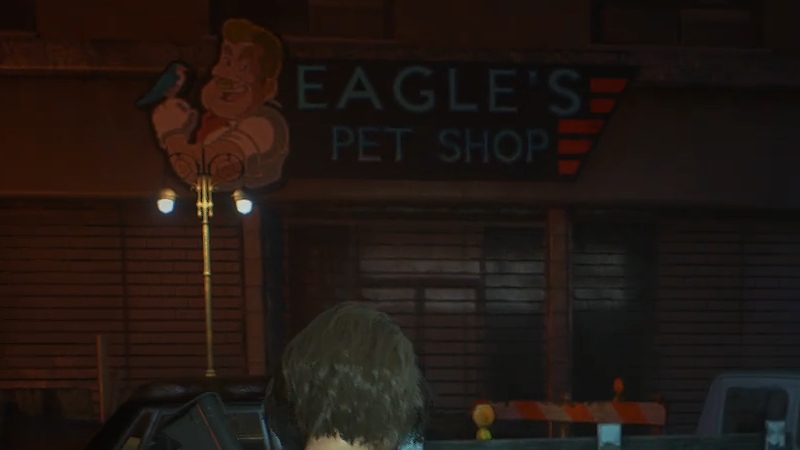 Now presumably, this is a pet shop owned by a man called Eagle, who's shown there in the logo, grinning winsomely with a budgie on his arm. But my headcanon is that the apostrophe in the name is a grocer's apostrophe, and this is in fact an incredibly inept pet shop that sells budgies to people for nine hundred quid, on the completely spurious pretense that they're eagles. I kind of want to watch a sitcom about this, now I think of it. 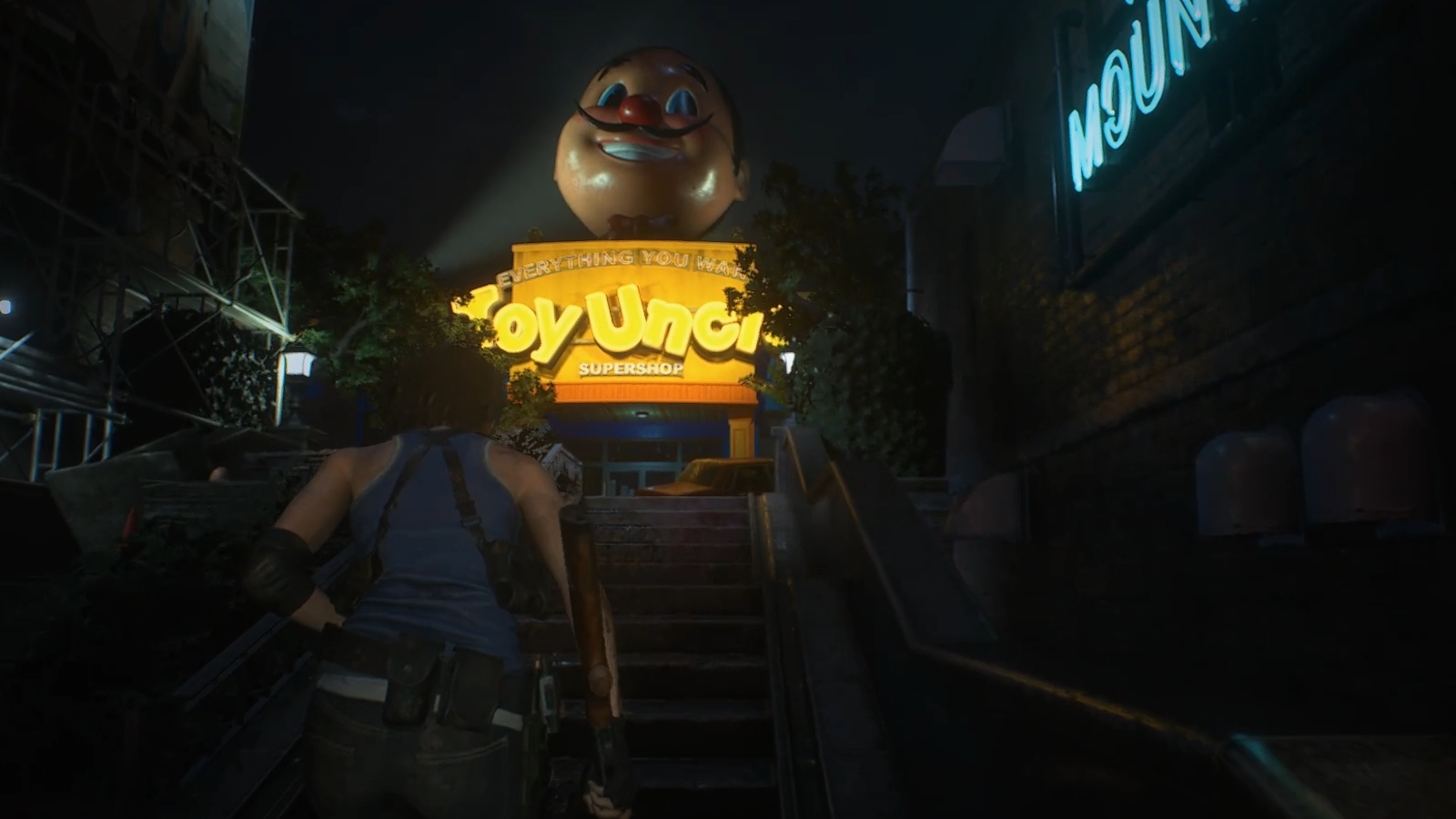 And finally, the crowning horror of Resident Evil 3, which makes Nemesis, giant spiders and prolapsing sewer monsters all look positively benign by comparison. Toy Uncle is an astonishingly sinister name for a toy shop, made ten times worse by the demonic energy emanating from the vast head on the roof. It's like the Pringles man had a cousin who went to jail for sex offences. I hate it. "Everything you want" is such a fucking eerie slogan, too. But not half as eerie as the contents of the window display, which I took the time to snap for you: 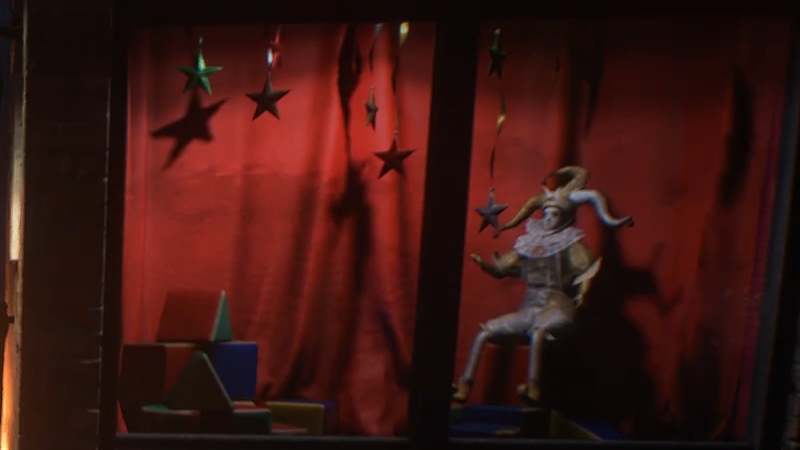