I'm still fascinated by Getting Over It, though I've reach the point where I can only handle playing it for about 15 minutes a week. Amazingly, that'd be enough time for speedrunner Christian 'Distortion2' Licht to make his way all the way up the mountain 7 and a half times: last week he became the first person to beat the game in under 2 minutes.

While I won't be performing such a feat any time soon, I did get the chance to pick Distortion's brain about his first clamber up the mountain, how speedrunning Getting Over It compares to other games, and - most importantly - how to handle those rage inducing set-backs. Be warned that though the game has no story, we do discuss some of its twists and turns.

RPS: Tell me about the first time you climbed the mountain. How long did it take you, and did you ever think you might give up?

Distortion: My first time playing the game was just like any other player. It took me about 6-7 hours and I almost gave up right at the end. In my first playthrough I actually made it to space and launched myself back down. I turned off my stream shortly after that feeling pretty defeated, but I came back later in the day and managed to make it to the end in around 30-45 minutes. At this point I knew that there was a high possibility I would want to run the game.

RPS: How do you feel about the jumpscares?

Distortion: I think that the jumpscares are a funny little addition to the game that makes for some memorable moments. I've enjoyed watching the several clips of streamers launching themselves back down after making it to the church, and I'm sure Bennett put that in exactly for that reason.

RPS: At what point did you decide this was a game you wanted to speedrun?

Distortion: I wanted to speedrun this game because in the past I've mainly ran games that have a large abundance of RNG. Getting Over It is almost the exact opposite of that in the sense that it is completely skill-based and solely requires precise mouse movements. It was a nice change of pace for me, and I really enjoyed running the game at first. I think that GOIWBF is one of the most gratifying games that I've ever played, first playthrough and speedrunning alike. There is a great sense of satisfaction seeing your skills improve in the game simply through time and a better understanding of the physics and controls. 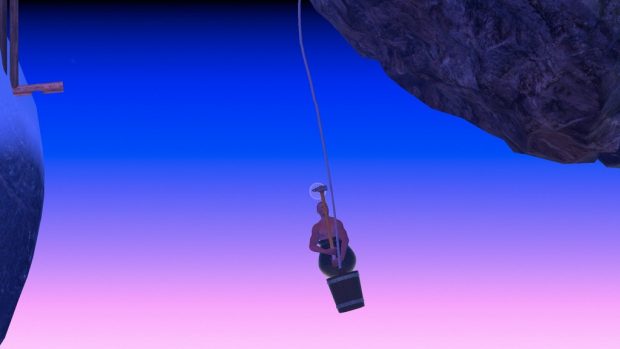 RPS: Do you think speedrunning other games has given you the patience and determination to handle Getting Over It’s infuriating difficulty? Or were those qualities you started with?

Distortion: Speedrunning other games has definitely helped with becoming comfortable with resetting and just staying determined to get a good time. I still have my fair share of frustration and annoyance, but you don't necessarily see that when watching a run that went well. These are definitely qualities that improve over time, but I still have a ways to go compared to some others. When striving for a very good time in a game you tend to get invested in the runs that do go well, so when it does fall apart it can be quite demoralizing. I lost several runs that were on pace for sub-2, but they made me realize I was that much closer to achieving it.

RPS: What advice would you give to someone who’s struggling to handle their frustration with the game?

Distortion: If anyone is having trouble with the game make sure to enable trackpad tuning. All the speedrunners of the game uses this option because it makes the mouse movement feel much more reliable. Apart from that, taking breaks and letting the game controls really set in helps a lot. It took me a few days to beat the game, and in the later days I felt huge improvements to my performance. The controls for the game are simply not intuitive, so time is just a necessary element for improving. 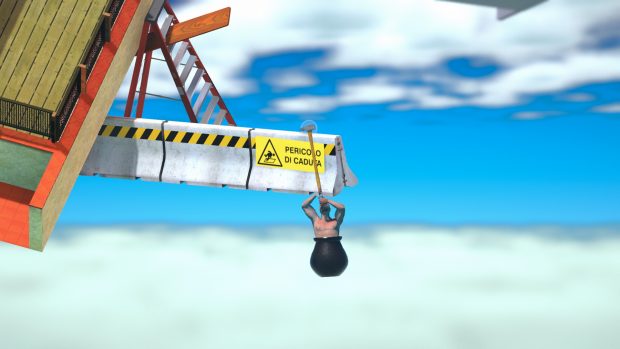 RPS: The video of your sub 2 minute speedrun ends with you uninstalling the game. Are you sure you’ll never go back to it?

Distortion: I may return to GOIWBF some time in the future, but it may be awhile considering I am quite burned out on the game. Sub 2 has been my goal for a long time, and I'm super happy to have finally achieved it. When I first started speedrunning this game we were discussing how fast a Tool-Assisted Speedrun of the game would be, and a few runners were doubtful that below 2 minutes could even happen. Here we are now, with a sub 2 minute run and even more time to save at that.

RPS: Do you think anyone will ever manage to break 1 minute 30?

Distortion: I'm not quite sure if a sub 1:30 run will ever happen. The current fastest sum of best of a runner is 1:27, so it would require near perfection. In fact, a community member of ours put together a compilation of some of each runner's best segments and the end-time was 1:30.