If you do not understand the low-key cerebral pleasure of inventory management, then what are you even doing playing videogames? Get out. Everyone else, welcome to Wilmot's Warehouse. A whole game about fiddling with your inventory and wrestling for space amid piles of bananas and hair dryers. It's basically a giant version of that suitcase in Resident Evil 4 that holds all of Leon Kennedy's eggs. It can be stressful at times, but there is one feature that makes all the box-stacking labour worth it. After a while, you get the chance to watch a timelapse of your warehouse, from the minute you began work, to the latest moment of perfectly formed rows of boxing gloves. It is glorious.

You get the timelapse feature in the second half of the game, by unlocking it with stars earned for being a good delivery Wilmot. Because that's the other thing you do in this box-pusher, you deliver flowers and platypus tails to all who request them at the shopping window. You're essentially an Argos, but with a weirder catalogue.

That is only a 30-second snippet of my warehouse, but in the game your timelapse can go on for much longer. By the end of the game you can watch back every messy delivery and every bit of box-shifting trickery you used to make room for the next batch of Marmite jars. You can track dramatic turnarounds, like when you realised: "Oh, if I just shift everything here two squares to the left, it'll make deliveries easier!" Or the precise moment you decided to tidy up all the animals by sorting them according to their proper genus. Here's a second timelapse in which I construct a zone which I internally called 'flag corner', a place I would dump the increasingly troublesome amount of flags showing up in the warehouse.

You probably don't care. You've got your own umbrellas and dominoes and stamps to take care of. And that's good. This is a minimalist sort 'em up about taking pride in your work, not mine. A game about sorting footwear into one big pile, and sporting equipment into another. Then recoiling in metaphysical horror when you are given a pair of swimming flippers. I organised one section of my warehouse by dubbing it 'state security' and that's where I put all the CCTV cameras, the loudspeakers, the search lamps, the red triangles that look like missiles, and the button that launches the red triangles that look like missiles. It does not make sense. But please don't touch anything.

The timelapse is the perfect record of your work, an outlet for that pride all Wilmots will feel by the time they reach the end of the game. It is a satisfying chronicle of all your confused shifting, all the minutes in which you realised you needed to move a huge chunk of stuff across the warehouse. "Oh no," you think. "I need to reclassify these worms and put them in 'medical' section to make room." Then the solution will come to you. They are no longer worms. They are maggots for the medicinal removal of bad flesh. That's a thing hospitals do, right? Sure. Off to 'medical' they go, next to the pills. 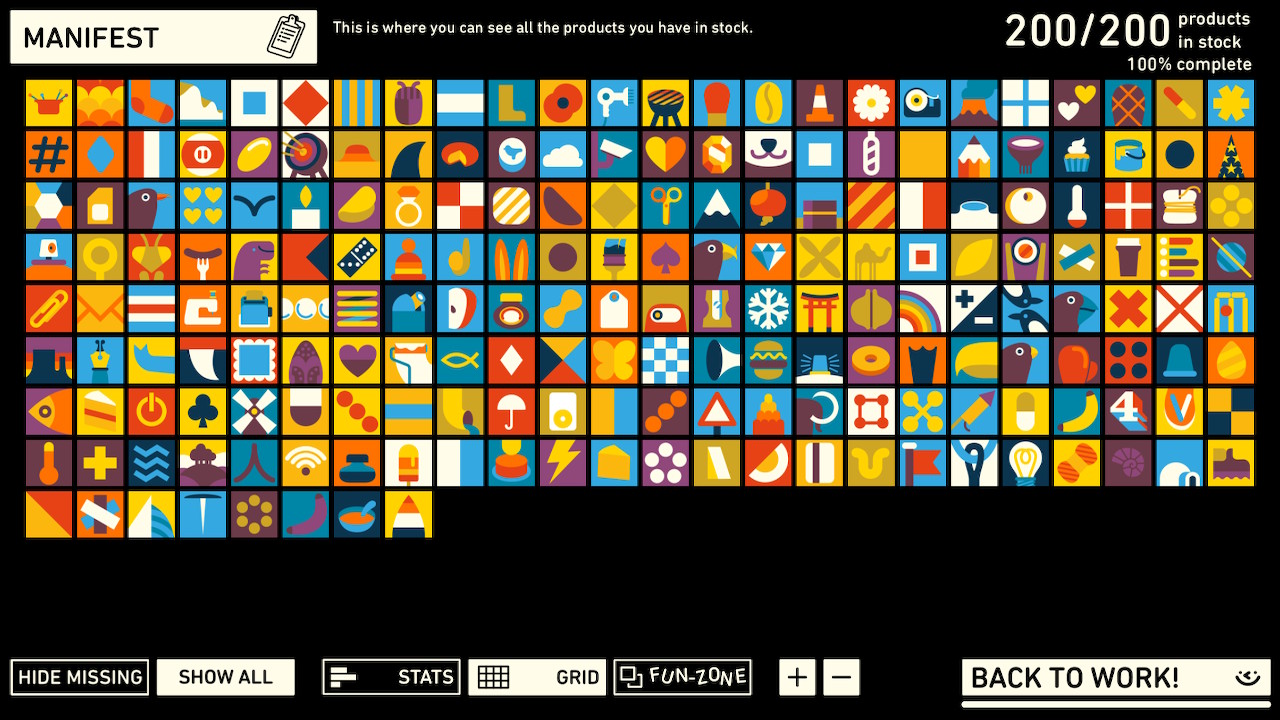 These snippets are only 30 seconds because 1) who cares where I put all the birds? And 2) I played this on Nintendo Switch which only allows you to capture 30 seconds but let's forget I said this. In the actual game your timelapse runs until your most recent box-shifting, so you can watch it right to the end, until you see your perfect warehouse, spotlessly ordered, with no problems whatsoever.

Apart from all the fireworks in flag corner.