Tension is ramping up in the RPS office, as we approach the release of The Sims 4's new Tiny Living Stuff Pack, and thus the editorial Tiny Build-Off between me and Graham. My tactic so far has been to practise a lot at home, so I am familiar with the build controls. Graham's has been to undermine me at the office, and try to prejudice the rules in his favour.

For example: last week Graham noticed I was watching build videos on my second screen, which I was both using a soothing white noise while I worked, and hoping would send tips on how to roof houses into my brain by osmosis. (This did not prove to be the case, but still.) Graham, who had lots of meetings last week, raised that he didn't think I should be allowed to do that. VidBud Alice L., who is overseeing the competition, upheld this objection.

Like most cartoon villains, though, Graham's scheme proved to be more of a problem for him than me. He soon realised that in fact the only time he would have to research any of these videos was during work, since he has to spend his time outside work on useless things like being with his family or caring for his young child. Sucker.

I, on the other hand, learned how to make a split level living area by deleting half of a building's foundation. Then I spent 90 minutes crafting a kitchen I would characterise as "aspirational bougie", using a lot of items from the Kichen and Pufferhead Stuff custom content packs recommended by Alice L. in this video.

My technique for building in The Sims 4 has evolved from 'build something I think looks nice' to 'imagine a very specific person and context and build something around that', so let's talk about the woman who owns this kitchen. (She is not the Sim pictured eating a grilled cheese in this screenshot. That was a randomised Sim I made so I could make sure the cooker and chairs and whatnot could still be used.)

This kitchen is owned by a suburban mother of two living somewhere in the home counties. Her name is Linda. Linda views doing the school run as a clout game, and does it in some species of Range Rover even though she does not need a Range Rover. The kitchen is designed to look homely and lived in (note the carefully haphazard mug rack on one counter top) but the children are not allowed in there with shoes on. The family has a hypoallergenic dog like a Bichon Frise, but it isn't allowed in the kitchen either. The kitchen belongs to Linda. 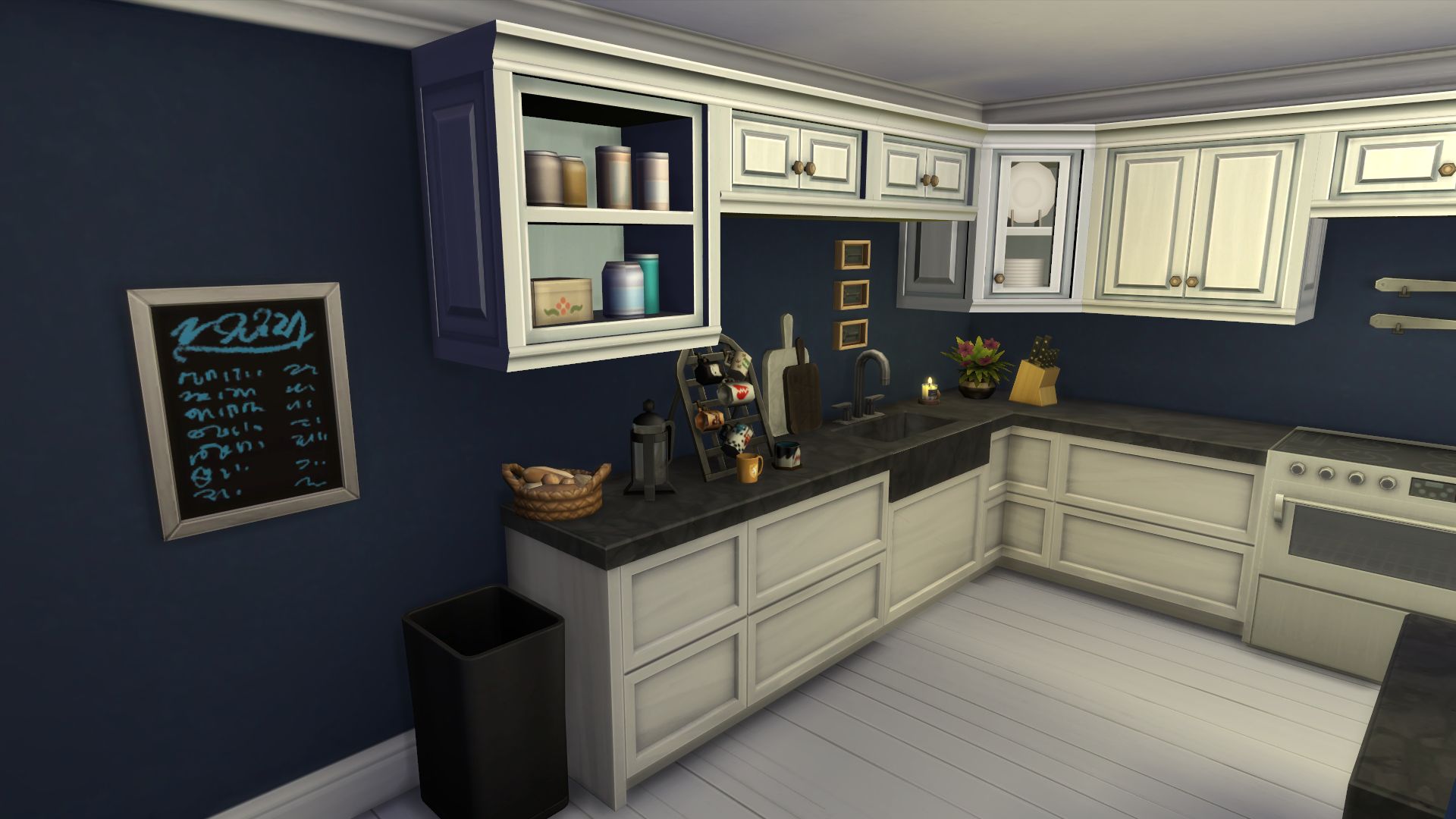 It was built in consultation with an expensive interior designer, who dutifully took notes as Linda asked for it to be modern, "but also feel like a farmhouse kitchen, yah?" and translated that into white wooden cupboards and floor but an industrial looking sink. Linda softened the hard edges of the faux-stone counter tops with carefully selected bric-a-brac and lush plants. The plants keep dying, but she just buys new ones.

Linda writes that evening's dinner on the chalkboard. Her husband is rarely home in time from the office to eat with the family, but that suits Linda fine. She plates up for him and keeps it warm, and he takes it off to the study. Linda sits at the breakfast bar drinking red wine and idly thinking of texting the kids' swimming coach, with whom she is having a casual affair.

So anyway, given the above I am concerned I will not be able to build a full house in the time Alice L. is allotting us. Here are the rules she has set:

Graham has started saying I should get a point deducted for every time I make use of the 'move objects' cheat. I think he's worried.