From the unpleasantly chilly northern edge of Total War: Warhammer’s [official site] Old World comes its final DLC faction: Norsca. These mammoth-loving Viking analogues, despite being a minor faction that don’t quite have the star power of the Orcs or Empire, manage to encapsulate and then build on all that's great about Creative Assembly’s post-release armies. They’re aggressive, experimental and blessed with an exotic and intimidating roster of warriors and monsters.

Somewhere between squashing Dwarves with my enraged mammoths and burning down the Bretonnian capital in the name of my dark god, I realised that the Norscans contain most of what I felt was missing from the Chaos Warriors, Warhammer’s first DLC faction. They’ve got the same pace and ferocity, but they’re a richer army, with empire management wrinkles and a new quest system fattening up the campaign. 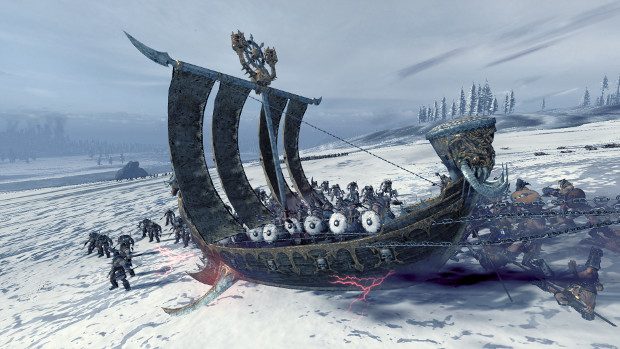 The business of running an empire and new types of quests don't get in the way of what the Norscans do best, however: looting and pillaging. Though harbours, mines and other buildings can be erected in some settlements, their main source of income is raiding foreign lands and sacking foreign settlements with relentless forward momentum.

Initially, though, they must contend with the other northern tribes by conquering or assimilating them. While diplomacy is an option, assimilation is best achieved by fighting their leaders and winning. The Norscan tribes respect strength, and if their leader has been defeated in battle, they’ll usually agree to join a confederation. Diplomacy at the end of a sword is the Norscan way. It’s not a perfect solution to Warhammer’s typically dull diplomacy, but it’s definitely more reactive and, more importantly, clearly tied to things you're doing on the campaign and in battles.

Unlike the Chaos Warriors, who just want to watch the world burn, Norscans conquer with purpose. After a successful siege, on top of sacking or occupying the city, they may also erect monoliths to their dark gods -- a twist on the raze option -- to win their favour. Honouring one pisses off the others, but it has to be done. These patron gods offer up several bonuses and sometimes special characters, and once enough favour has been won, a war is triggered with the other two jealous deities and their champions. 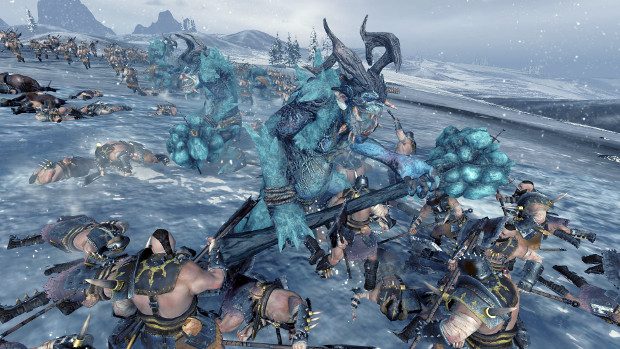 The Nosca campaign, then, is laden with crossroads. And not just in regards to picking a deity, but in the fate of settlements as well. See, Norscans aren’t a horde faction. They can, and probably should, occupy conquered settlements. Outside of their homeland they can occupy coastal cities and capitals, turning them into outposts. There, they can spread Chaos corruption, generate a modest income and recruit new units closer to the front. But every occupied settlement is a monolith that doesn’t get constructed.

Ultimately, you choose based on your needs at the time. If you desperately need more troops, for instance, an outpost is a good call. But if you’re rich in both cash and troops, erecting a monolith might be a better course of action. There is, however, an exception! Taking certain capitals or regions unlocks unique buildings and research opportunities, empowering your bloodthirsty armies. Nab the Bretonnian capital and you’ll be able to research the Secrets of Grain & Grape, conferring a whopping 500 percent bonus to trade agreement tariffs, along with buffs to cavalry charges and growth. Essentially, you’re stealing the Bretonnian’s knowledge of mounted combat and taking advantage of their fields and vineyards. 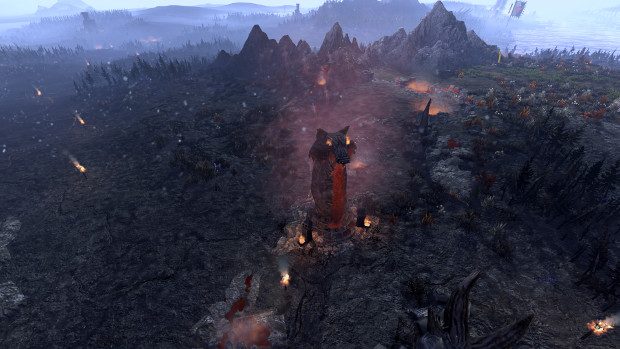 You only need to defeat the Empire, Bretonnia and the other main Norscan faction, but the many benefits gained from destroying the Dwarves, Vampires et al is a strong incentive to march all across the Old World. This will also put you in a better position when it comes to the end-game challenges. If you’re going to defeat the champions of the gods you’ve spurned, you’ll be wanting to field the strongest armies that you can. Monster hunting offers another way to toughen your troops up.

After researching Monster Hunter, you’ll gain access to the Monstrous Arcanum, essentially a new set of optional quests. Accepting a quest will send you on a journey across the map, stalking the Old World’s most dangerous creatures, from Frost Wyrms to Cygors, culminating in a final battle. Rewards for completing these hunts run the gamut from new gear to special, top-tier units.

On the subject of units, Norsca boasts a diverse and entertaining list of brutish warriors and hideous monsters. The backbone of any army is the Marauder, an improved version of the Chaos unit of the same name. Though lacking much armour, these mad barbarians grow stronger the longer they’re engaged, making them surprisingly stalwart. And more advanced versions get better armour and weapons, so there’s always room in an army for them. They’re joined by fearless Berserkers, who make up for their squishiness with their immunity to fear. 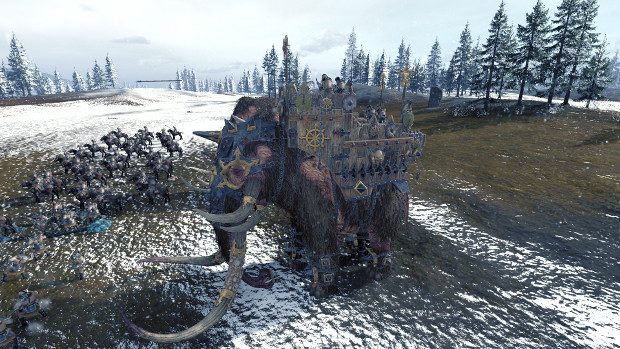 The more exotic units include Skin Wolves, terrifying werewolves with preternatural speed, health regeneration and a bonus when fighting large enemies; cold-blooded Firmir, capable of shrugging off missile attacks; and the gargantuan Frost Wyrms, icy dragons who can slow down enemies or just terrify them. The highlights, of course, are the mammoths, both armoured and feral flavours. They’re unstoppable charging machines with space on their massive backs for morale-boosting Chaos Warshrines.

If there’s a weakness, it’s the absence of decent ranged units. Norscans like to get right up in their enemy’s face, which can create some challenges when they’re dealing with armies full of archers. Making the most out of their rage and fearlessness is imperative, then, and luckily there are lots of ways to shore up potential gaps. I like to have a Warshrine near my Marauders, and if I’m confronted by too many ranged units, I send my Firmir to deal with them.

Leading the Norscans are Wulfrik the Wanderer and Trogg the Troll King, along with an assortment of warchiefs and magical heroes. Trogg's a beefy Troll who provides a mountain of benefits to both armies and regions, while Wulfrik can summon a ship to smash into enemies. It comes out of nowhere. Doesn’t even need water. Aside from his ship-summoning prowess, Wulfrik doesn’t offer a great deal initially, but once he gets his mammoth mount, he can be quite the devastating warrior. 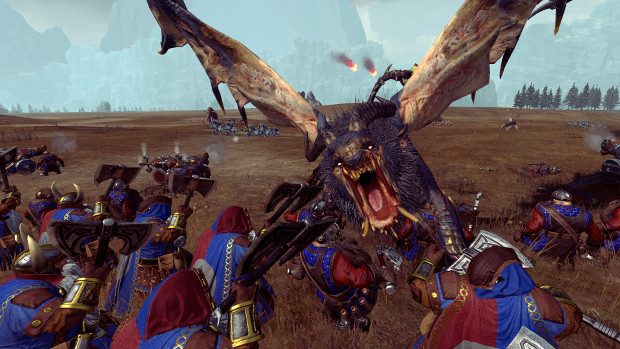 Eventually, once you've sent the minions of the other gods packing, you’ll be able to decide if you want to dedicate your warriors to the Chaos head honcho's cause. In the Norscan campaign, the Warriors of Chaos don’t start their invasion until you’ve become top dog, and then you’ll get the option to side with Archaon and help him demolish the world. Or maybe you'll just want to crush him and take everything for yourself. Pick door number two and you’ll be treating yourself to one of the toughest climaxes in the game -- make sure you’re all geared up from those monster hunts.

Norsca is a brilliant last hurrah for Total War: Warhammer. It’s full of spectacle, monsters and thrilling wars, but where it really succeeds is in its campaign twists. Even with its final piece of DLC, Creative Assembly have been able to find more ways to make the grand campaign feel novel.