Touhou and Castlevania are two great flavours that have been paired for years now, but I think that Touhou Luna Nights might be the best blend yet. A slick metroidvania by Team Ladybug (the folks behind that neat Shin Megami Tensei promo game), it's been in early access since August last year, adding a new zone every couple months. Today, the final levels were added, and the game officially launched. Take a look at its time-freezing powers, puzzling, platforming and some bosses that seem quite fond  of screen-filling rainbow lasers in the launch trailer below.

The story - as with most things Touhou - is a vague excuse for a lot of explosions, so no series knowledge is required. Sakuya, the time manipulating, knife-throwing maid of the vampire-owned Scarlet Devil Mansion, has fallen into a parallel dimension. To get home, she has to fight through this other-world castle, which is overrun by all manner of monsters. Mostly ghouls, ghosts and other supernatural stuff, but with the occasional piece of amusingly high-tech gear. Seeing a tiny fairy firing a massive autocannon or rocket turret is the kind of nonsense I'm always on board for.

Sakuya's powers (heavily inspired by the villainous Dio from Jojo's Bizarre Adventure) mostly revolve around stopping and slowing time, and throwing a ridiculous number of knives. This makes for a pretty fun set of combat powers that double as puzzle-solving tools, which evolve over time to deal with more complex level design and enemy types. Later levels have some obstacles which aren't affected by your time-slowing powers, while others have water which - when time is frozen - turns solid. Great for walking across it when it's flat, but a waterfall becomes a solid obstacle.

The game's Touhou heritage shines through brightest in the boss battles. Lots of bullets and lasers flying around, and you're rewarded for 'grazing' enemy attacks; letting them hit your character sprite without touching your central hitbox. There's a lot of focus on using your time powers to extend safe windows, giving you a chance to reposition safely away from a huge laser barrage. It also helps that all the bosses, enemies and Sakuya herself are beautifully animated - par for the course with Team Ladybug/Mogura games, but still nice to see here. 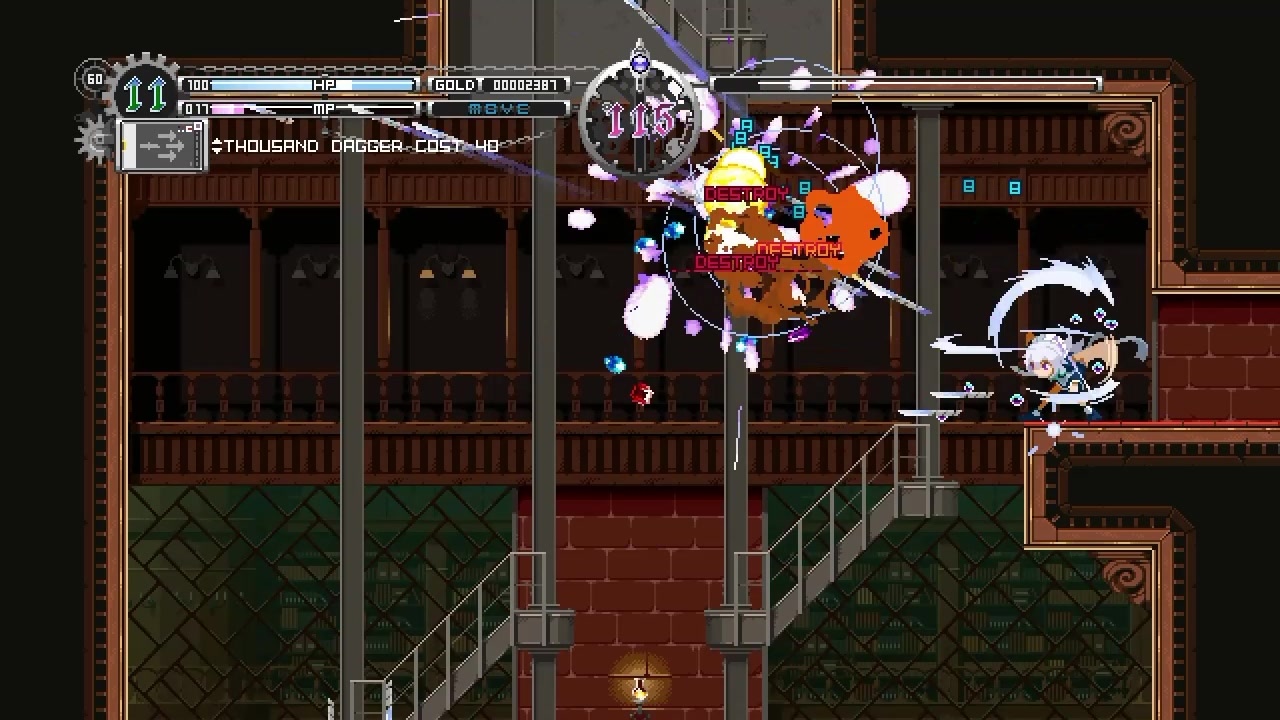 Oh, and one tech tip: Touhou Luna Nights and a few other games don't like my high-refresh Gsync laptop monitor and run way too fast. After some experimentation, I found the easiest solution was using Rivatuner Statistics Server to limit it to 60fps - it's surprisingly easy and intuitive. You can set limits on a per-game basis too, so set it and forget.