My plan was to tell you all about The Crew 2's multiplayer. Last week I reviewed it as a single-player game, because the servers had yet to be populated, and indeed because I at no point encountered any option to actually take part in any. Despite being an 'always on' game, that immediately disconnects you from playing should your internet connection drop, and logs you out if you have the temerity to go downstairs to get a coffee, it just didn't seem to want me to find its multiplayer elements.

It really is quite extraordinary how laser-focused the game is on directing you toward exclusively single player elements. When you look at the game's map, the "Default" tab only shows solo events. When you look through all the other tabs, it doesn't get clearer. The closest there is to showing anything even vaguely requiring an online element are the game's most dreary features, little on-spot speed records or jump distances and the like, which you'll inevitably find yourself only knowing you took part in after it tells you you did. And even here it's about breaking your "friends'" scores in their absence. 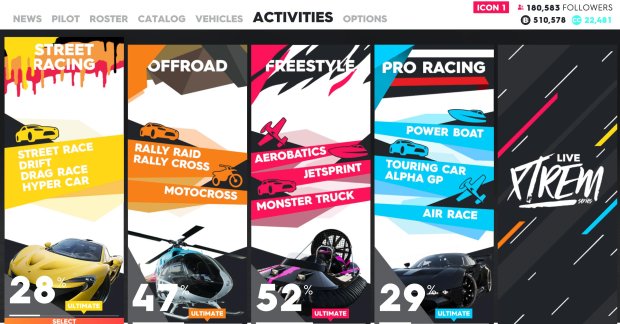 But this is a game by the Test Drive Unlimited team, and that game - while making all the same mistakes - at least let you just drive up to another player and find yourself offered a race. So I tried that instead. Which was an element only slightly scuppered by the almost complete absence of any other players. Oh dear, The Crew 2, that doesn't look good.

Eventually I found someone; the little white arrows that float over the screen driving me to distraction the rest of the time point toward another human being. One 'TheTiltedLama' was sat there, in the middle of the road. Up I went and... it was a ghost. A translucent car through which I could drive. No joy there. Perhaps TheTiltedLama had died playing the game, cursed to pointlessly haunt its streets forever, his only link to mortality being The Crew 2's always-on requirements?

I kept going a little longer, and eventually managed to find an actual playing player: LM.MrsGroToTo. Catchy. But Mrs Gro was actually there! So we drove around each other like nervous territorial animals, sizing each other up, unsure what was going to happen. And then Mrs Gro took the initiative and smashed into me. It was, it seemed, exactly like territorial animals. This was to be an aggressive demonstration to see who would survive to rule the streets of this ambiguous section of LA. I smashed into her. She smashed into me. We smashed into each other. She definitely took more visual damage! Except, of course, The Crew 2 doesn't offer any actual damage modelling for its vehicles, only allowing scratches or mud splatters to briefly appear, before an invisible team of fairies clears it all up. Our actions were pointless.

Mrs Gro then started flashing her headlights at me in a frenetic fashion. "Oh!" I thought. Maybe this is like Test Drive Unlimited too! We flash our lights at each other and that triggers a race?! Except, no. The sum total effect is some flashing lights. And honking horns. But no further interaction is possible. At all.

We could, I suppose, have used our headlights to flash a Morse code message to one another, "R A C E Y O U T O V E G A S" or something, and then charged off on our own impromptu competition. But it didn't seem likely.

Again I scoured the maps, the options, the various screens that demonstrate what is available to you right now, to find why on Earth this is a network dependent online racer. And still found nothing.

Perhaps I was being stupid? It's been the case. So I relented and did some Googling. I first found a link to one of IGN's wikis. Now, these are obviously far more often literal clickbait, links to holding pages to trick unfortunate readers, but surely with The Crew 2 out for a week it'd have some information? Take a look.

Further searching took me to outlandish articles written by even more disreputable PC sites, misinterpreting year-old press releases to think that all solo play contributed toward your multiplayer progression. Nope. And then I found this article on Twinfinite that finally popped my balloon of hope...

The Crew 2, an online only game, has no inherent multiplayer at all. It has a co-op mode, but it's only available if you play with friends you've established outside of the game. Up to four of you can group together as a "crew" and take on its scant co-op challenges. That's it.

Gosh, I hope everyone who took to chastise me under my original review for failing to recognise the way the game is supposed to be played are already crafting their hand written apologies!

The Crew 2 is a single-player game! Even Ubi's own blurb plays down the possibilities of teaming up to play, instead focusing on absolute drivel like being able to "share your personal accomplishments". It's "fueled by the need to share" such things! Except, of course, it isn't, either metaphorically or literally. Those bits where it tells me that I've beaten some jump distance or speed or whatever? That's the game optimistically hoping I'm going to eventually add any other human being as a "friend" on UPlay (friends don't want friends to use Uplay), and then will challenge them with the task of doing better at the thing I, and likely they, accidentally did.

So if you were hoping for a chance to replay all those solo races, but with the roster filled up by other players in the game, as I'd just assumed it surely would - nope. And if you'd liked the idea of finding a random stranger, linking up with them, and then hanging out in the game - it really doesn't want you to. But if you were thinking, "Gosh, I hope I can play a tiny fraction of the game alongside three of my friends who've also spent £50 on this deeply mediocre game, and then maybe go for a drive around the nation getting incessantly annoyed by its obnoxiously petty impassable barriers it puts up everywhere", then BOY do I have a game for you!