A lot of headsets sound like they're playing a game of buzzword bingo these days, and the Turtle Beach Elite Pro is no exception. Are you a pro gamer who's into esports and want to play like the athletes you see on the internet? Well, the Elite Pro and its Superhuman Hearing tech, TruSpeak microphone, Aerofit ear cushions and ComfortTec fit and ProSpecs glasses relief system (yes, all actual words printed on the side of the Elite Pro's box) could be the headset for you! Sorry, you'll have to excuse me a minute, I think I just threw up in my own mouth.

Marketing jargon and crimes against the English language aside, though, and the Elite Pro is actually a very nice headset. A rather bulky,  heavy gaming headset, but a nice one nevertheless. But is it the best gaming headset? Read on to find out. 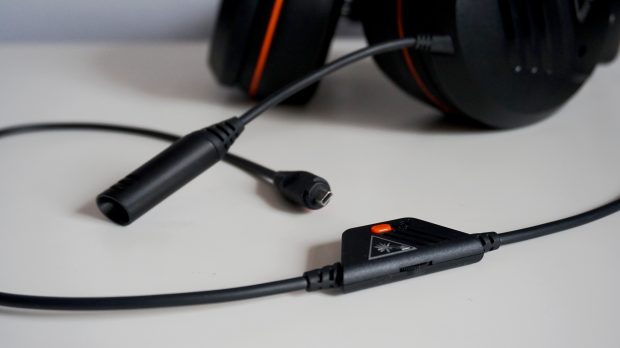 Some might appreciate the fact it's multi-platform, as it also comes with a 3.5mm stereo jack cable in the box in addition to its generous 5m long USB cable for PC. Both simply slot into the headset's proprietary port that dangles off the left ear cup, so it's pretty easy to switch from PC to console if you want to get more use out of it.

Both cables come with an microphone mute control and volume slider as well, making it easy to adjust when you're mid-game. Personally, I much prefer having my volume controls down in front of me rather than some vague point on the headset itself, as it means you don't have to pause the action while you faff around trying to find a switch or button on the back of your ear.

Really, though, the main bulk of the Elite Pro's cost probably comes from its fancy-schmancy headband. As well as the usual amount of extension you get around the ear cups to make them bigger or smaller, the Elite Pro also has two little sliders along the top of the headband that let you alter how taut the main cushion is underneath. It's a similar kind of suspension design to the Arctis 7, only here you can adjust each side exactly to your liking, making it (theoretically) more flexible and giving you greater control over the headset's overall comfort levels. 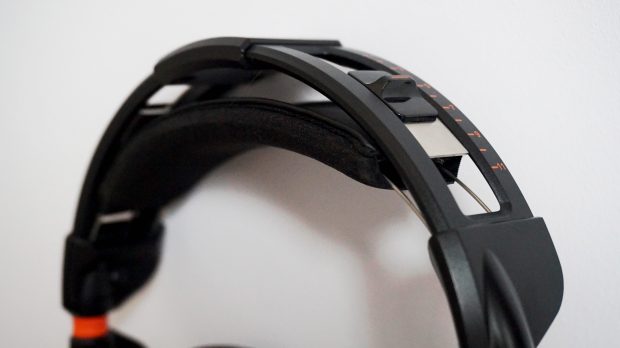 Alas, all that extra adjustment ended up going completely out the window when I came to test the Elite Pro, as the sheer weight of the damn thing - all 390g of it - still ended up giving me a headache after roughly an hour's use. Even its large, plush ear cups felt like they were pulling down on my ears after a while, and the whole thing just felt like it was too big and bulky for my head.

As mentioned in previous headset reviews, this may be a problem unique to my apparently weirdly-shaped head, as I can't seem to find a non-pinching headset for love nor money. The only headset that's really managed to buck that trend so far is the Arctis 7, which is disappointing given the Elite Pro has such a similar sort of design.

Still, assuming it's just my head that's the problem, the Elite Pro's audio quality is generally quite good. Turtle Beach might say it's specifically tuned for 'the esports', but I wouldn't say I noticed any particular bias when I ran through my suite of test games. 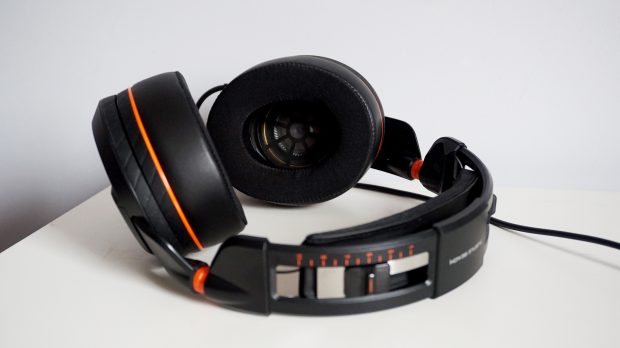 In Doom, for instance, its bass-heavy soundtrack struck a good balance against the crisp crunches of smashed demon skulls, and shotgun blasts still had plenty of weight to them. The highs were perhaps a little muted, with imp screeches and laser fire sounding a tad flat compared to the rest of any given battlescape, but nothing that would make me want to rip the headset off in disgust and demand a refund.

Hellblade also put in a convincing performance, creating an effective onslaught of clear, audible voices that held their own against the rest of the game's low, rumbling background music and whipping wind effects. Admittedly, the overall clarity of the voices didn't produce the same feeling of spine-tingling closeness as other headsets I've tested, but it was still perfectly acceptable.

The Evil Within, meanwhile, sounded excellent, with the rasping moans and death rattles of Sebastian's lovely zombie friends standing out perfectly against the ongoing gunfire and odd exploding barrel.

It was only when I tried playing other, more regular types of music that the Elite Pro's so-called esports tuning really started to rear its head. For example, the battle tunes from my trusty Final Fantasy XV soundtrack just didn't have the same kind of depth or impact as other headsets I've tested in the past, and the bass sounded quite echoey by comparison. Strings also sounded very thin in busy orchestral sections, and it really struggled with some of FFXV's more operatic tracks like Apocalypsis Noctis as well, with rumbling drum rolls sounding like damp, dull thuds. 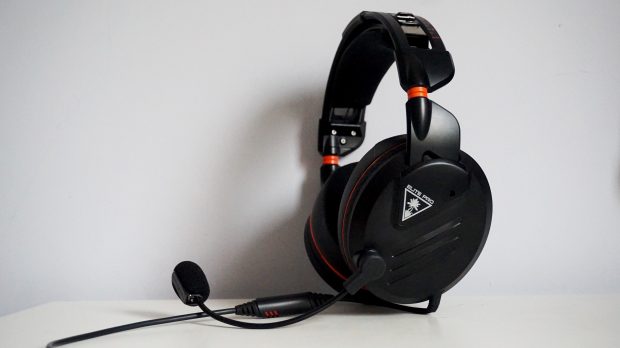 I found the same thing happened in other genres, too, with rock vocals once again sounding quite strained against the accompanying guitars and drums. Even poppier melodies sounded like they were fighting to be heard at times, and overall everything sounded just a little too clean and clinical for my liking.

This is a shame, as I generally like to be able to use a headset for both work and play if I can possibly help it. Still, even if you only end up using the Elite Pro for playing games, at least you can count on its microphone to deliver a decent chat experience. I've used the Elite Pro for recording a lot of my recent appearances on the RPS Podcast, our fair  Electronic Wireless Show, so have a listen to our JRPG and monster specials to see what it sounds like. On the whole, though, audio was clear at all times with only the occasional bit of pop if I happened to have the mic positioned a bit too close to my mouth. Even that was easily fixed, though, as its bendy wire arm can be molded into practically any position you like.

Ultimately, though, the Turtle Beach Elite Pro just doesn't do quite enough to justify its premium price in my books, both in terms of overall audio quality and general comfort. It's also not a good pick for those with smaller heads, as it's just too big and bulky to be used comfortably for several hours at a time. For me, the Steelseries Arctis 7 is still the gaming headset to beat.