Having poked around at the earliest stages of Underworld Ascendant, I've reached the conclusion that it's just not in a fit state to be released, and as such, not in a fit state to be reviewed. Announced in 2014, this spiritual sequel to the seminal Ultima Underworld games of the early 90s was Kickstarted $860,000 in early 2015, with a ridiculously optimistic release date of November 2016. Two years after that, the product I backed at the time is here. And it feels like it needs at least another two years before it's close to ready.

Ultima Underworld II was the first PC game I ever played. In 1993 we bought our first 486, with 2MB RAM, and enough hard drive space to install all 11MB of the game, enough to run this system hog of its day. So it holds a special place in my heart. But of course had the useful advantage of also being an extraordinarily brilliant game by gaming's greatest developer ever, Looking Glass. When it was announced that original developers, including designer Paul Neurath, alongside Tim Stellmach, Steve Pearsall and Robb Waters, had formed Otherside Entertainment, this seemed like such a sure thing. It's a Looking Glass reunion! It's more Underworld!

Who knows what's happened since, but the game released last week neither looks nor feels like an Underworld game, and while certainly a prototype for what might one day be, is a colossally clumsy mess of batshit physics and nonsensical storytelling. 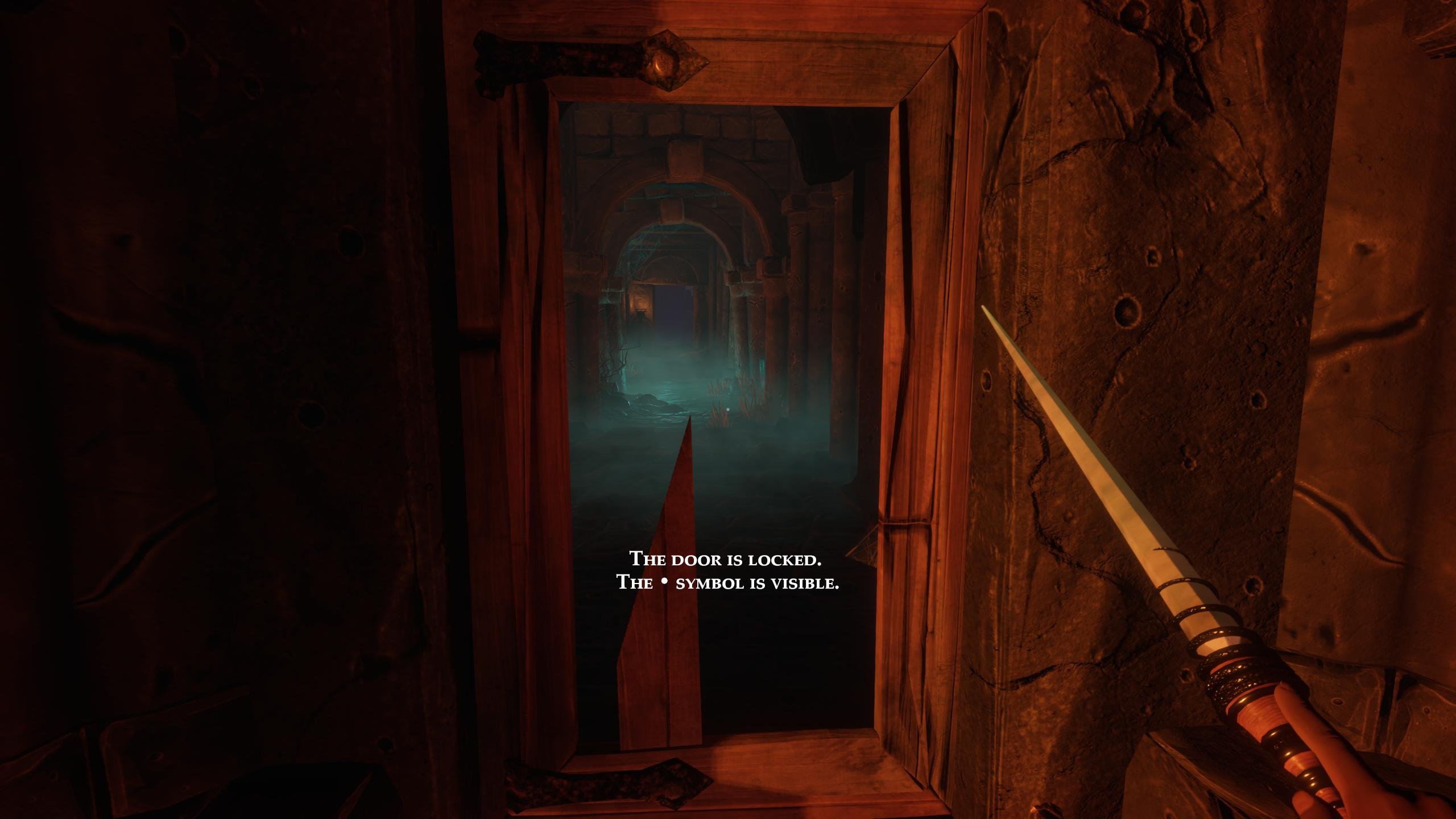 Why not just give the game the absolute slating it deserves now it's on sale? Because I feel like something must have gone really wrong, somewhere on the way. I've no insight whatsoever, but this reeks of one of those situations where an investing publisher has demanded the delays end and some sales come in. Yet I'm mystified why it's not been released as Early Access.

Because, look what release number the game shows when you boot it up:

So what's missing? Really fundamental things, like a working save game. At the moment the game lets you create respawn points using some dumb magic glowing tree thing in prescribed places, but should you quit and restart you'll find progress wiped and you're back at the very start of its expansive levels. Oh, and not all progress wiped! Because it ludicrously lets you keep your entire inventory, but resets all the puzzles and enemies. Having had to restart the opening section, I've now got an inventory with two of each of the unique items it hands you in its tutorial.

This isn't about preventing "save-scumming" (although there's a whole other article to write about how it's fine to let people "save-scum" if they want to, just don't do it if you don't like it), it's a failure to have implemented a way for checkpoints to be remembered between play sessions. In fact, even if you tried to reload during play after placing a tree-point, it'll still wipe all your progress, while maintaining your inventory, and dump you back at the level start. More mad still? When you reload a respawn point, it'll have maintained your progress after you created it, making a complete mockery of the whole process!

It's unfortunately incredibly clear that this is the result of failing to solve a significant problem, rather than a design choice, no matter how unconvincingly Otherside might be trying to sell it in a recent update in response to the enormous disappointment. Lines like the below read more like a bug description than a justification.

"You can save the game in Marcaul or in any of the dungeon levels. It saves your current inventory, hot bar and non-quest related things you’ve collected in the level. It does not save your current location, the state or location of enemies, the state of chests that have been looted, changes that you’ve triggered to the level (like raising the water), or any progress on quests. So loading effectively takes you to the start of the level and the beginning of the quest you were on, losing all quest progress." 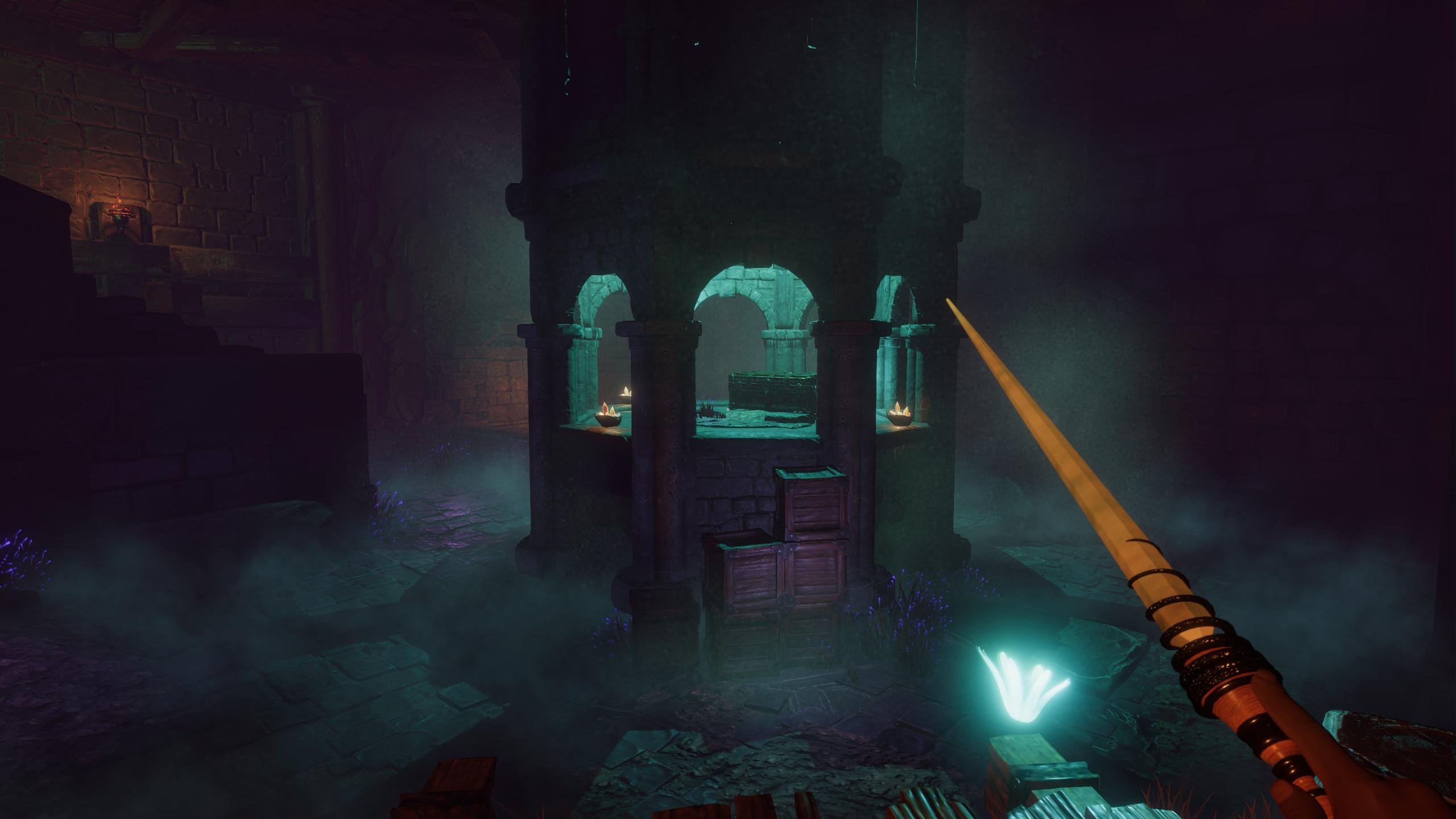 The next most bizarre issue is the physics. The game immediately feels like Dark Messiah Of Might & Magic meets Thief, which might well sound amazing, were it working. And perhaps rather importantly, doesn't really sound like Underworld. And a big part of that Dark Messiah sense comes from the embracing of everything in the world being a physics-driven object. Except the physics are from the Klutz Dimension. In a way reminiscent of those early 2000s games where everyone was still getting used to Havok, you stumble and bumble your way around the gloomy dungeons, where walking near a table sends it flipping upside-down, knocking over a stack of crates onto what might have been a priceless vase. Despite objects madly stating their mass on screen when you pick them up, they all behave as if they're made of balsa wood. So a "44 lb" crate rolls away at the wind of your leg passing by, making a mockery of all attempts to use the system to stack paths to reach higher places.

It has systems like fire in place, and they work! If you put combustible objects in a fire, they catch light. And wooden doors can be burned down! This is great! Except it all happens so unbelievably slowly that you spend much of your time twiddling your thumbs in yet another barren gloomy room waiting for the door to burn, panel by panel, because even one fragment of wood left in the frame renders the vast open space impassable. 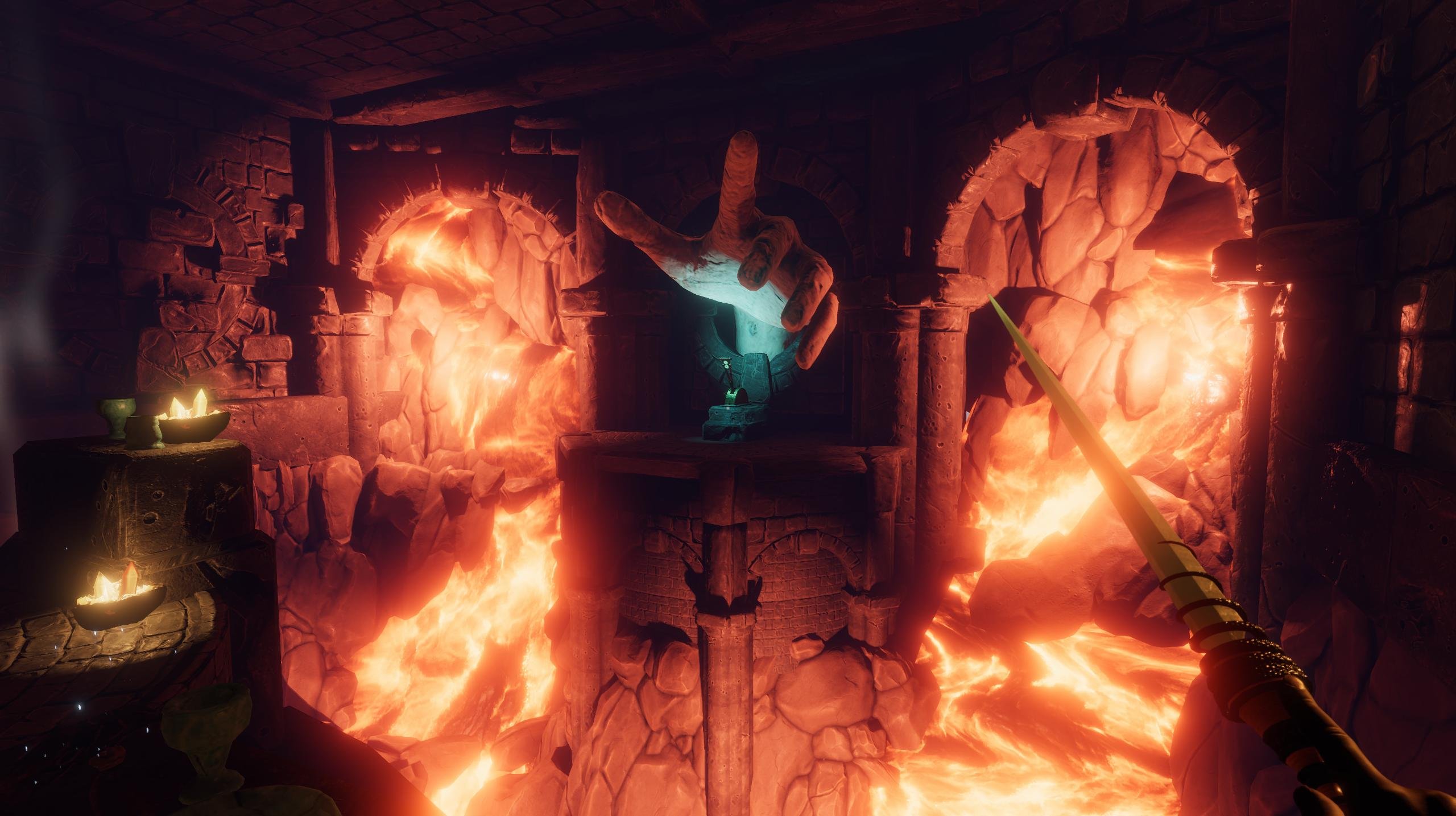 Worse, the game early on emphasises the importance of controlling light levels to you, a la Thief. You're given water arrows right away! Hooray! Firing them at torches and fire pits splashes them out, casting shadows, and allowing you to sneak. Except when they don't. Many is the time when I've watched as sploshes land on distant flames and do absolutely nothing.

But far more egregious is a scene at the end of what plays out like a tutorial, where it tells you to use all you've learned about light and dark, to avoid fights, or turn circumstances to your advantage. You're in a large-ish room with a balcony around the top, lots of torches and a chandelier, and two skeletal enemies. So I do as I'm told, put out all the flames (eventually, because the chandelier was super-buggy), and yet even after that the room remains brightly lit because of fixed light points they've programmed into the scene! The room in which you're supposed to black things out to win a fight has fixed lighting! 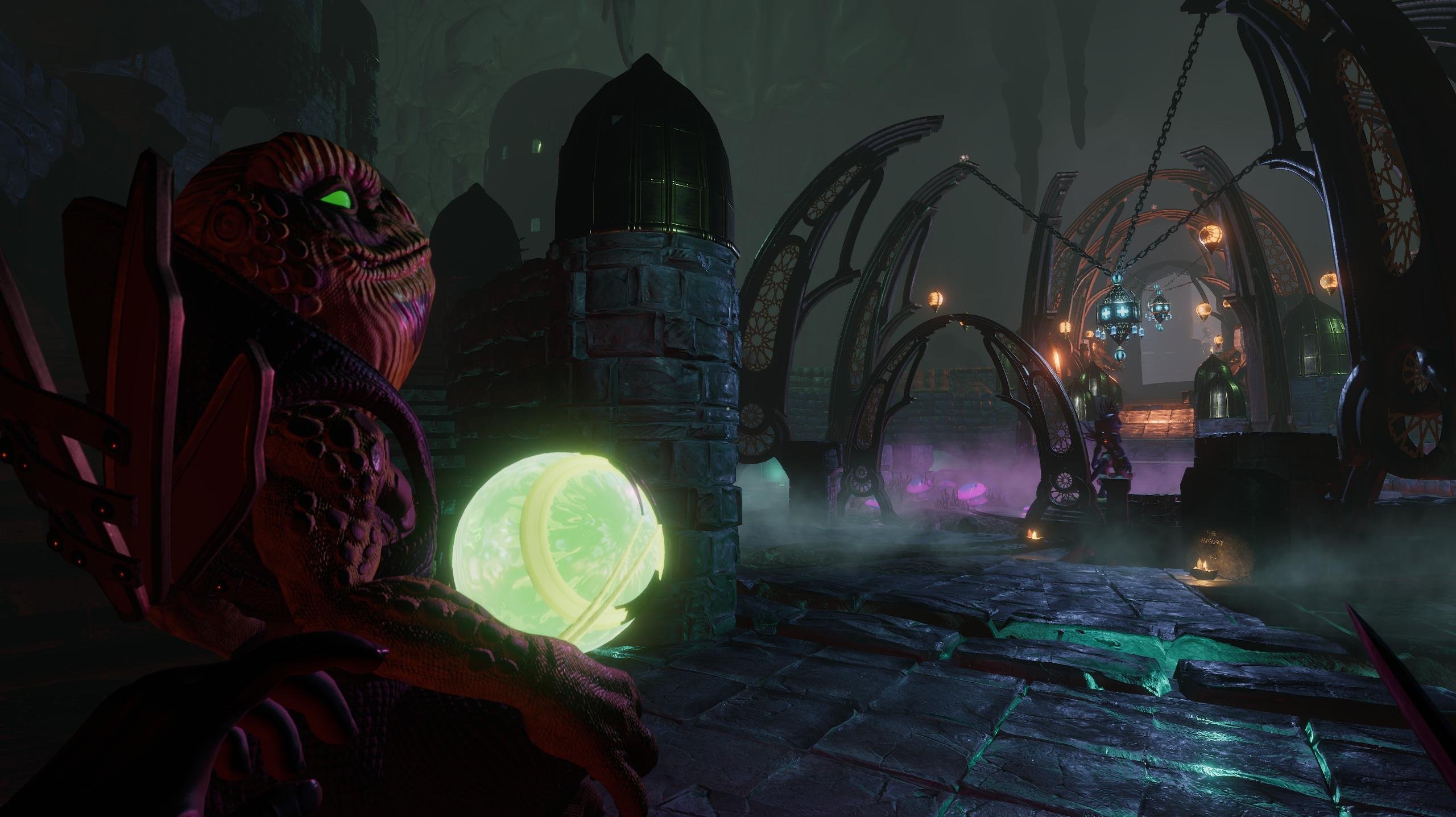 It's elements like these, from the off, that suggest a game that either hasn't been play-tested, or if it has, the results had to be ignored. And there's so much more. Movement feels sluggish and treacly, in a way that colours every moment. There's no useful description of a weapon's stats, or why you'd use one sword over another, and all their icons are identical. The symbol for a "deteriorated rag bandanna" is an iron helmet, as is anything else worn on the head. (Oh, and in-game they're rendered as... a vast leather backpack.) Load times are absolutely atrocious. Missions end while the narrator is mid-sentence. So many elements aren't explained as they're introduced. And it's hard not to think some of the words on the level completion screen were meant to be placeholders. 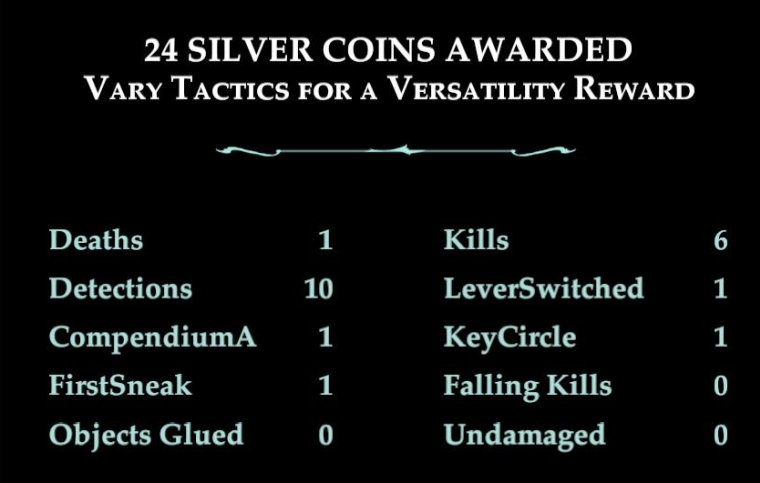 And then it just goes on and on. Very pretty, but very empty rooms. Horrible voiceovers shouting inane nonsense at you in place of a sense of story. Despite claiming that it's running at 80+ FPS, it feels like it's going at 20. At one point delivering the killing blow to a skeleton caused me to be propelled high up into the air. In another part, I pressed a lever to switch off a moving trap, and the lever didn't move but the trap pinged out of existence... And some are reporting a bug that lets you clip to the final level in the first hour of the game.

Then there's enemy AI. Or the complete lack of it. The most complex it seems to be is having them run toward you when they see you, and then that's it. Most often they screw that up. Repeatedly hitting a skello while it stands still and madly roars at a wall is the norm. Melee combat against a skeleton with a bow and arrow involves hitting it with your sword thirteen or fourteen times while it stands still and mumbles. 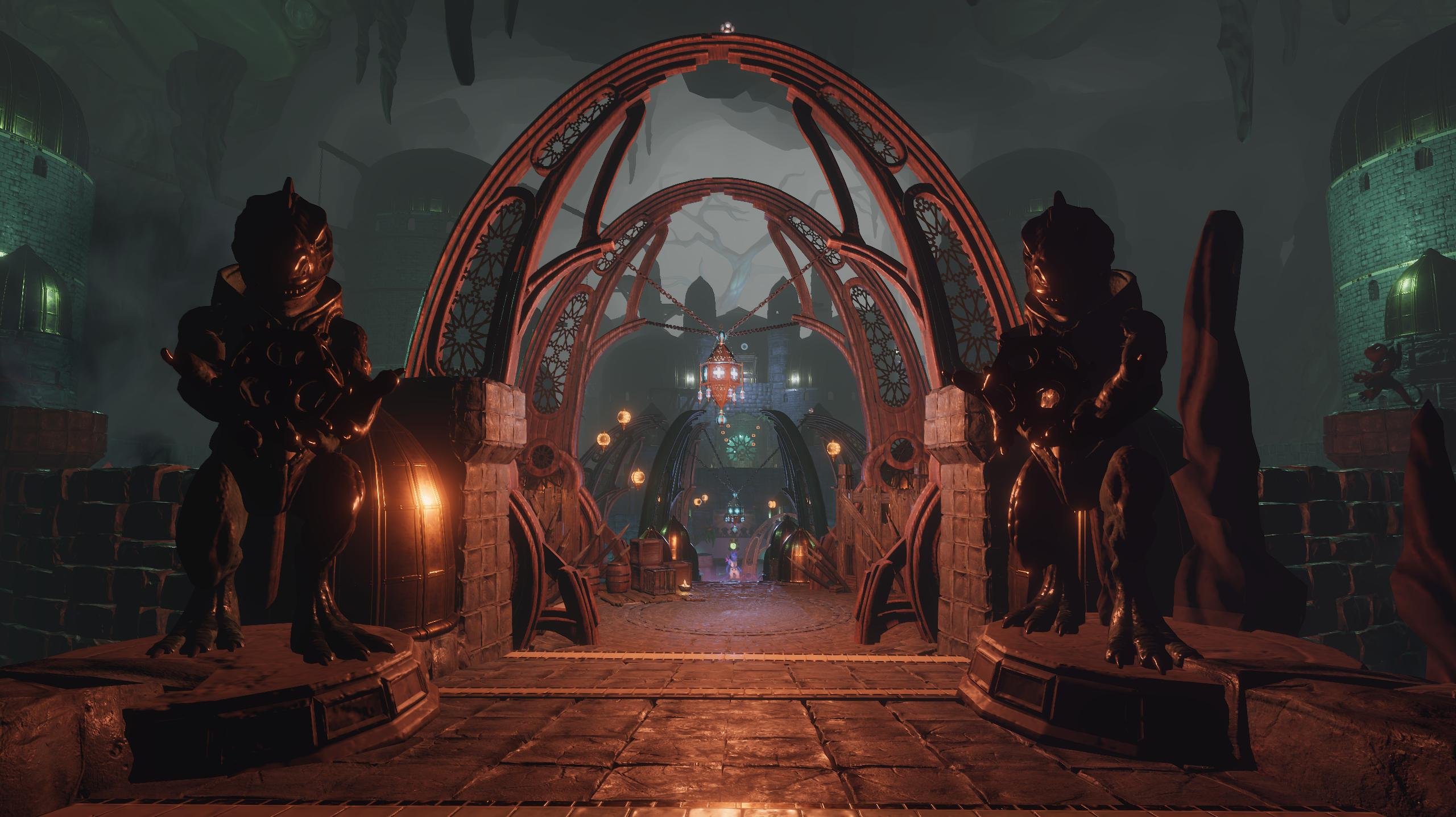 I really could go on. I've no idea what happened here, but to me it looks like Otherside just released an alpha build of a long-from-finished game, and called it done. Which you just can't do. Especially not at £25. If that's because they ran out of money or time, then there's maybe hope they can use money from sales to return to fix it. There's a much worse theory, too, of course. That they bit off waaaay more than they could chew, made ludicrous promises about ecologies and actions impacting upon the universe, and then just lacked the skills to deliver it. So made this instead. And released it anyway.

We'll keep an eye on it, see if there's some colossal update, perhaps to add in some sort of narrative, maybe to pop in a point to the whole clumsy affair. Perhaps it will one day reach version 1.0! In the meantime, steer so clear of this. Do not be lulled in by your nostalgia for Looking Glass's wonderful RPGs. Like I was. Bah.