Today's selection marks the 1,000th game I've played this year. One sodding thousand. Admittedly it's a meaningless number but it might give some hope to those of you who are worried that games are going downhill or it's been a bad year. It really hasn't.

There are loads and loads of great games out there. Sure, there's some rubbish too, but this column alone has sifted through a thousand in a mere 8 months, and that's after discarding the big names, the stuff Fraser or Dominic have poached, the shovelware, and the inevitable daily idiot-milking dreck about PUTIN JONG BITCOIN HA HA HA. And that's just on Steam!

Things are good, my brave Unknowanauts. Whatever our complaints about Steam? The games, they are good. We are very lucky to be here, now. Long may it continue. Onwards then, to another round of Unknown Pleasures.

I'm far from the first to lament the obsession games and games journalism have with being a bloody dad these last few years. Where's the game about being a teenaged girl who's sick of her dad's terrible jokes and patronising lectures about feminism, eh?

Well anyway, here's one about bludgeoning monsters to paste with your child. As in, literally using your child as a blunt weapon. It is very silly. It's also not the overlong single joke it could have been with such a premise. Dad Quest is a funny game, with great and succinct writing that opens by taking Dadness to absurd levels and keeps going from there. Your quest is to prove yourself as a Dad by passing the necessary laboratory tests, and then venturing into the desert to learn the secrets and powers of Daddery. Mostly this involves throwing your child at monsters and upgrading their skills by hurling them through windows, in between some serviceable platforming.

As platformers go it's middling but livened up by the unusual weapon, odd monsters, and easy navigation. Dialogue is concise and playful, and gently chucklesome rather than uproarious or ZANY LOL. Which is absolutely the right way to go, as the latter would have quickly gone stale.

It's a silly celebration of the Dad Fad and an open assault upon it, but entirely without malice. Also there's a bit early on where you face a palm-operated security door, except instead of a hand you press your entire child into the panel.

Oligolopoly gets more fun to say every time. I'm hoping it'll get more fun to play over time too, although it's off to a good start. You're some sort of capitalist filth, and you've entered a bizarre world where there are several small towns on a large landmass but no food or infrastructure to connect or supply them. Which admittedly makes for a less arduous game than those that put you in an already complex and functioning economy, but anyway.

You spend money to plonk down farms or mines, give them a warehouse, and a place to either sell the produce or refine it into something more profitable. Units are rather small and the whole thing seems designed to be manageable, which is helped along by the clear and straightforward UI. Setting up transport links is typically a Daedalian nightmare in these supply chain sims, but here it's remarkably straightforward. That could come at the cost of granularity of control over a long game, and the tools to macromanage are currently a bit lacking (which is probably natural at this relatively early stage of development).

So far it's enjoyable and pleasantly accessible. I particularly like the way the towns noisily spring up new, fancier buildings around your profitable retail outlets.

"One of very few adventure games to not immediately bore me to tears this year" is my faintest praise yet. You're Brialynne, a Dwarven former adventurer who's spent the last few centures settled down on a private island farm. Someone purloins your axe, necessitating terrible vengeance, for as the Prophet Rosa said, "What kind of woman doesn't have an axe?". A brief investigation offers several possible conclusions to draw, something I'd hope is repeated later in the plot, and then it's off to the mainland to track it down.

Pendula Swing's world is, in stark contrast to most "fantasy" games, an imaginative one, with social upheaval as different types of humanoids (goblins, elves etc. so not THAT imaginative, but still) have cultures that actually changed over time in response to economic pressure, technological advances, and not least, the warmongering and propaganda of other cultures. Brialynne wanders into a society based on 1920s urban America, with its jazz and stockbrokers and EXTRA EXTRA and increasingly vocal demands for suffrage from oppressed minorities. But her understanding of it is centuries old, based on the typical medieval fantasy game where humans and dwarves kill goblins and orcs because they're evil savages and that's that. It's an original concept, executed well.

The tone isn't flippant, nor as heavy as the themes suggest, and it resists the temptation to write out a Black liberation or feminist story and clumsily paste goblins into it. The premise is well handled, and an imaginative excuse for having you talk to everyone and ask dumb questions. It's tempting to roleplay too, as dialogue options give you clear chance to be an ignorant relic - I didn't, and sort of regret it. But I at least gave everyone my real name, even those whose ancestors I brutalised. The bare minimum I can do is own up to it, right?

It's not minimalist, but it's a classy comeback for Puzzle Game of the Week. A hex-based ... hexagon is before you, partially populated by plants. Your task is to spread the plants across it in turn-based fashion. A turn countdown marks the end of the round, but beyond that there's no instruction. It doesn't matter. There doesn't appear to be a way to fail Evergarden, and it was a while before I figured out that the goal wasn't just chasing points.

Each plant can drop a seed on a neighbouring space. Each new turn sprouts a new seed on each plant, and plants of the same level can spread onto each other, growing the target up one level and emptying the other space. A strange woodland creature hints at laying out particular shapes. Doing so grants you a random well-grown plant you can stash in an inventory to plant later.

It doesn't appear to be awash with secrets but I'm hesitant to spoil it anyway. There's a little more to it than making shapes, but the main joy is the way it combines two of the fundamentals of all games. While some games are about tidying up and some about expansion, Evergarden cheats by encouraging both.

It's a calming, gentle game, and laying things down so that you chain together multiple seeds and clear them all away gives a curiously mancala-esque feeling of smug satisfaction.

Part JRPG and part turn-based strategy. Lumme, the odds were stacked against this, given how hard it is to evaluate either genre in a mere fraction of a human lifetime. I can confidently say though, Fell Seal is quite good. And yes, I am absolutely hiding behind the ambiguity of the British "quite".

You're an Arbiter - police, basically - and take exception to seeing a feller get stabbed up. It's refreshingly fast to get into the plot - where 98% of JRPGs would still have some whiny jeb talking about his sad childhood or the Ancient Tales of Prophecy Legend or whatever for 20 minutes and 109 ellipses, Fell Seal shows rather than tells you what's happening. You're to escort an openly evil noble to a town where he's less likely to buy his way out of justice (rather than the sensible option of, say, stabbing him), and from there you're gradually exposed to more of the world and plot.

The turn-based fighting is grid-based, rather than the weird standing in a line style, and positioning is a big deal thanks to flanking bonuses and ranged attacks. It lives comfortably between too simple and overly demanding - I got through fights by being a bit careful but not obsessive, and felt that I could have done better if I'd taken it more slowly or studied the rules a bit, but that it wouldn't ever become necessary, and being careless would have cost me.

I have some far-too-subjective complaints about the UI, but this is shaping up well.

This is a first. Modsork shows every sign of being a fun game, but one I can't fairly evaluate, because I am utterly incapable of playing it. Have you ever watched someone playing with a two-stick controller for the first time? It's like watching a kitten try to operate an octopus.

That was me playing Modsork. Even after the tutorial made things pretty clear, I was barely capable of the most basic movements needed to clear away the very easy enemies. The basic idea is each stick controls a separate blob, and shoulder buttons connect them with a coloured beam. You use that to splat evil geometry, with more complex movements acting as smart bombs or powerful rotating lasers. I'm sure some of you will like it, but I just can't play it. You'll have to use your own judgement. We've got through so much together. I believe in you.

Pick of the week: Another close week, as Fell Seal overcame my prejudices and deserves a bright future. But Pendula Swing has pipped it. 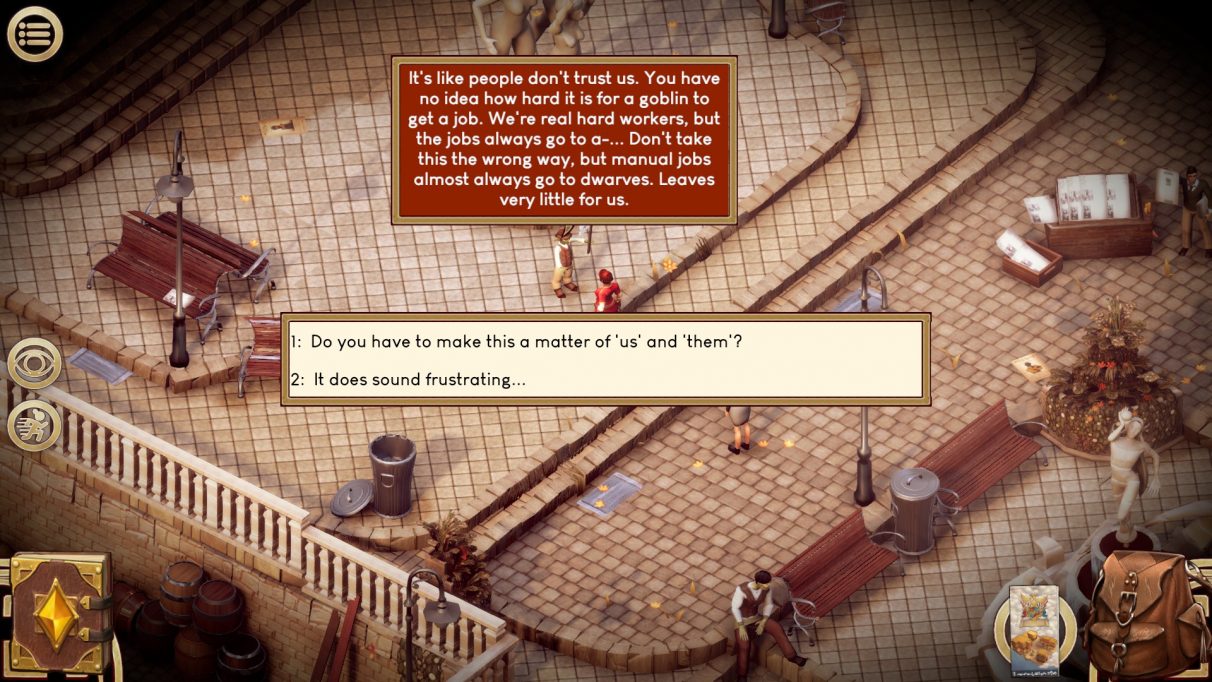 As adventure games go, I love it. There aren't really puzzles so much as practical questions like how to talk or buy your way into circles likely to lead you to the thief, or what connections to lean on to get you through a VIP door. As an episodic game it's difficult to judge, but I'm really impressed, although hardcore adventure fans might find it lightweight. Still, they can always combine a stick with a coin and give the cheese to the policeman and whatever the hell else they get up to in between playing rubbish games.