There's not long left before the big 20, but those crafty devs continue to release legions of games anyway, surely coveting the grand prize of a spot in the Unknown Pleasures annual finals. Or possibly they want to have enough money to buy food. Who can say?

Five more games join the ranks of the worthy today, for it is, once more, time for a selection of the finest under-appreciated games on Steam.

Doing that lungey thing sprinters do at the finish line this week: socialist revolution, cultist massacres, and pretty flowers.

Spring Falls has simple rules, but I would struggle to tell you them because I've not actively thought about them, let alone listed them in my mind. It's a hex-based puzzler where the idea is to direct pools of water so that they'll nurture seedlings intro sprouting. You do this by lowering hexes, which causes water to spill into them, and down into anything below if you just opened up a path there. Little patches of greenery are the source of life, which you spread by enmoistening their neighbouring hexes. Connect the grassy patches to the seedlings this way and they sprout.

This is the most analytically I've thought about Spring Falls yet, and it's making me faintly uncomfortable. It's a pleasant, calming game that I enjoy playing intuitively, trying different approaches when I mess up, rather than planning ahead. That's not the only way to play, but the puzzles are small enough, and the undo and restart options quick and friendly enough that it's relaxing and satisfying, and when a level catches me out and I have to stick at it for a while, it's not frustrating or fussy.

Naturally, more complicated aspects are introduced every dozen levels or so, but none make it overly complicated, and the solution gap is pretty small.

No, it's not in the soundtrack. Did I ever tell you about the time I trolled an indefensibly young housemate into watching Ghost? It's so rubbish, and what exactly was the deal with the sexy reunion bit, was that technically lesbian, or... I mean, it's fine, I just want to know how it would have worked.

Anyway. Master of Pottery is a lovely little surprise. You're a potter, and you work with clay. Stop me if this is a bit technical, but you use one of those spinny foot things to do the whirly shapey bit that looks really easy but extremely isn't in real life. In the game you get a lump of clay, and use the mouse to gently nudge it into the shape you want, and then take the time to smooth it out so it's nicely symmetrical. This part is easy, and though I can see some appeal in making it accurately difficult, this approach was definitely right.

Once you have your shape, you fire your vase or pot in the kiln, which is another simple minigame. Then it's time to glaze and paint it, which, again, isn't fiddly or demanding. You start out with basic paints and prints, though you can stretch and resize them, and copy/paste them with a few clicks. The focus is very much on making something pretty or odd or interesting to look at, and it's just now reminded me of the graffiti parts of Vandals. You might start out thinking you'll make a funny monstrosity of a pot, but soon find yourself charmed into making a sincere piece you're quite proud of. When you're out of inspiration points, you spend money to exhibit your work in a gallery, and encourage people to pay to come in. With a bit of cash you can buy more paints, prints, and clays, and get a reputation that'll help you publicise more and even sell work.

The business side is appropriately light and easygoing. This is a lovely game all round. The character limit for naming your work is far too strict, though. Could this be my pettiest gripe yet?

Goodness me this is punching above its weight. Wildermyth is a turn based RPG with procedurally generated characters, whose attributes and backgrounds and relationships you make up as you go along, all of which can affect their stories and abilities. I'm going to call the overall story generic, because it is by design - you have three humble villagers who head out into the world to stop a nasty thing from consuming the land. It's necessarily simple and a bit cliché because it's a framework for what is essentially collaborative storytelling between you and the developers.

Time passes on a strategy map, which you must scout and explore and have fights and investigate ruins and mysteries on. The hidden monsters get stronger over time, and big events happen every so many days, so you'll need to build your team up, and it's this that's such a delight. Sometimes when your people interact, you'll get to choose their basic relationship - lovers will passively increase each other's stats, while rivals will get riled up and try to outdo each other with showy moves. While I was clearing out a region, my spellcaster had her lucky coin stolen by a wee ratty thing. I chose to ask the team for help before following it, and at the end of an ensuing fight, my grumpy warrior adopted the critter.

I could also have let it leave, or given it to the wizard. Character dialogue is succinct but brimming with personality, and the way they build organically with your direction is reminiscent of the sublime 80 Days. Battles are small and easy to grasp, but with just enough options to be interesting, and become complex over time as your people master their powers and the ante is ramped up. I like the spellcasting in particular - instead of fireballs and so on, wizards 'interfuse' with map objects, turning them into scouting devices and one-off weapons or tools, making them a much more tactically involved option than a glorified archer. There are lots of little details, too. The music volume automatically lowers when you alt tab out. If you change a character's armour or weapons, the changes are depicted in the story scenes, which are already lovely.

It urgently needs a move order confirmation system. If I wasn't already sold on it I'd be kicking a hell of a fuss up about this.

There's a bit very early on in Ritual when the witch who's resurrected you says "We're here to murder the entire parish, use the ritual to awaken God, and recruit him to our cause", which is exactly how I met my wife. Ritual is metal as hell, but it's doing it with carefully directed shots, not just generic excess. Conveniently enough for this paragraph, the same is true of its shooting. It's a twin stick shooter, see (a controller is highly recommended), in which you're a bounty hunter betrayed by a corrupted nation and brought back to life to protect the witch who wants to purge the land.

You travel the old USA, shooting back scores of cultists and demons as your new boss conducts her rituals, unlocking spells, new guns and gear, and generally causing mayhem. Each of your guns has a distinct function, and the standard six shooter is key to what it's doing right - blasting away can work, sure, but if you aim for just a moment longer, you'll nail a headshot that instantly kills most monsters. Guns reload even when not in use, so cycling between them is key, and the constant switching between different attacking styles again makes keeping your cool fundamental even when the monsters are inches from winning. It's intense and satisfying and feels exactly difficult enough.

I love the setting. The witch and her crusade are righteous as hell, and I am entirely here for characters who have no bones about straight up burning down a rotting nation with everyone still inside.

Kat Brewster covered Colestia's earlier A Bewitching Revolution in her excellent Priceless Play column back in April. They Came From a Communist Planet is a similar game, but takes a less puzzley approach to revolutionary politics. It's a short and simple game, well under an hour, in which you're inspired by aliens to reject capitalism and riot in the streets. As you do so you gain more tools to smash up shops and cars, and push back the lines of riot cops to retake more of the city.

What's notable is that for all their effect, the aliens' intervention gives you nothing that isn't already available, besides encouragement. You get no heat ray or replicators, just a sympathetic force that wants to unite you with the other millions of people who are isolated and crushed by a system that was always designed to enrich a few ruthless people by brutalising everyone else. I think it's a deliberate commentary too, to treat a simple rejection of the status quo as utterly alien. This is absolutely how even the most tepid questioning of capitalism as eternal and innately superior to all other possible ways of living is often treated, after all.

Also lobbing molotovs is remarkably satisfying for such a low-fi game. When the passive, cubular people milling around starting following my lead I felt proud of them.

Pick of the week: I stopped to play it some more several times while writing this, just because I wanted to develop my characters' personalities more. It's Wildermyth. 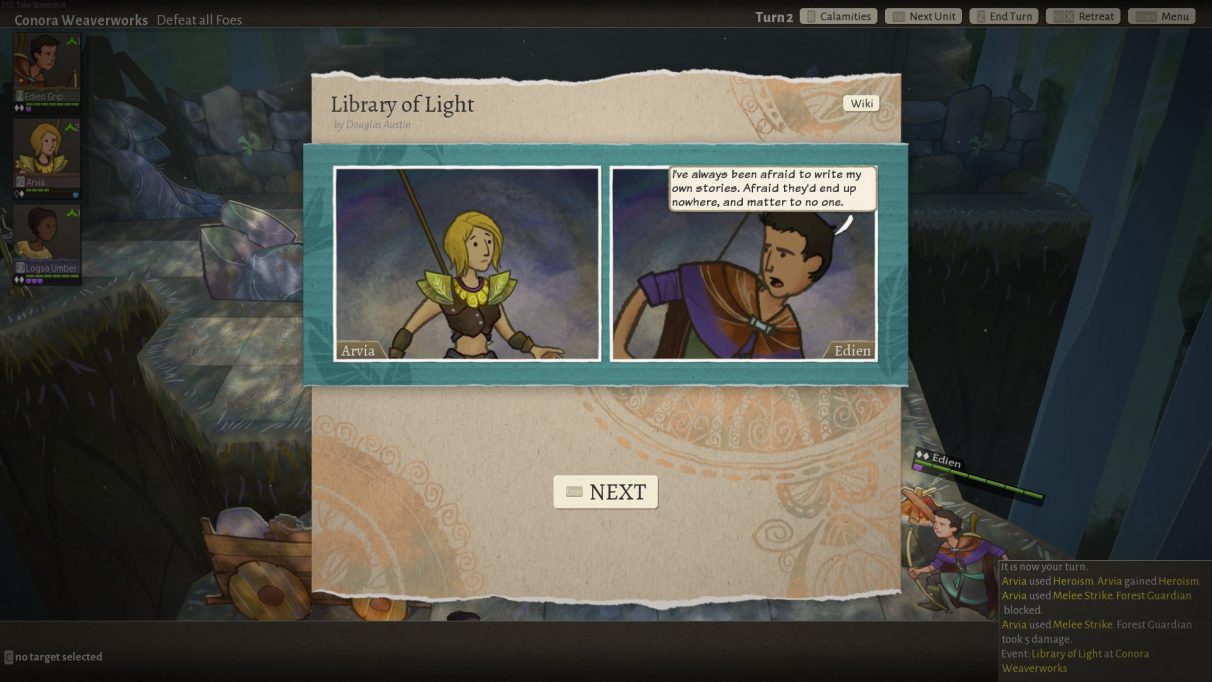 My hunter, Edien, liked to read. While we rooted through an empty fort for useful items (in order to reclaim it and secure the region), he started reading. And complaining. A book lover who doesn't just have a general purpose love of all books, nor a boring, safe regard for "the classics", but one who'd read enough books to be tired of clichés and overdone turns of phrase. While he was moaning about this, his rival, the pitchfork-loving fighter Arvia, interrupted to show him something that mentioned a mythical library.

The game gave the option to shrug this off as a wild goose chase, or go looking for it. A brief subplot followed that mechanically was just a fight and a few choose your own adventure options, and a level up. But the experience turned Edien into a character with dreams and sorrows, and doubts to overcome. It wasn't explicit either, but he and Arvia's rivalry turned in my head from a dislike of each other to a contest that neither would admit was secretly friendly.

This is some bloody good stuff and I'm really looking forward to finding out where both my story and Wildermyth's development go.