I wanted a comfort game. A big, safe, entertaining game to sink into, to distract me from cold-o-geddon. And what better than Unreal? An enormous, superbly built FPS, that's fast, entertaining, and full of... coughing, coughing aliens. Oh no.

Unreal might be one of the only games that exists in reality the same way it exists in my head. My memory of playing this in 1998 is exactly how it plays today, no idealised inventions being revealed as false as I charge around its enormous levels. And yet I feel like Unreal is bizarrely forgotten when it comes to reminiscing on the first-person shooter.

Clearly the name Unreal is not forgotten. Epic's series lives on as an engine that couldn't really be much more famous. It makes me feel a bit sad to think that for many, the game from which its name is taken might not even be known. Especially when it turns out to still be just so much fun to play.

In Unreal, you play as a prisoner on prison ship, that has crashed onto an unknown planet, Na Pali. Everyone else on board is dead, and you make your way out of the wreckage to discover a planet that's in the midst of an occupation. The incredibly peaceful, deeply religious locals are being horribly oppressed by a race of warmonger aliens. Which is an incredibly downbeat setting for such a fast, zippy, breezy game.

It's a very traditional shooter in many ways. You charge through individual levels, growing your arsenal of weapons, hitting switches to open doors, and shooting all the baddies along the way. It isn't, in this sense at least, much more sophisticated than that. It's just done so exquisitely well. And as such a technical achievement.

Unreal to me feels like the culmination of an era of FPS games. Developed over many years, its creation occurred over the first two Quake games, clearly influenced by them, while driven by an aim to technically outdo them. Where id had John Carmack, Epic had Tim Sweeney, two of the greatest coders of all time, each pushing 3D gaming forward in leaps and bounds. Unreal's huge achievements included two aspects that still feel great today: the contrast of indoor and outdoor settings, and the lighting.

Obviously games have nonchalantly switched between indoors and outdoors for many years, so it's hard to remember just what an extraordinary feature it was in Unreal. They just couldn't do that before. There'd be a giant load, and an awkward skybox, until you were glad to load back into a corridor. But even 22 years on, the contrast is striking. Unreal feels like a combination of a corridor shooter and an arena shooter, seamlessly switching between the two, its weapons and systems coping with both tight spaces and wide open hillsides. It's the game that taught me to circle strafe, and its enemies feel better to fight than pretty much any FPS released recently.

I want to elaborate on that last point, actually. I just can't get over how good the shoot-outs are. Enemies duck and roll and run about, hiding behind cover, circle around you, all sorts of things that feel practically forgotten as a possibility today. Most of it's luck, absolutely, but it gets lucky so damned often they start to feel like incredibly sophisticated AI.

Lighting seems a lot more trivial now, two decades' progress having seen games lit by near-photorealistic beams of glory. But oddly, Unreal's has come full circle. On release, seeing a purple wall light was revelatory. It just hadn't been seen! Things were just a colour. But here they were glowing, throwing shadows. Today, it's incredibly primitive of course, and yet there's something really special about those purples and oranges. Heck, when did a game last even pick that colour palette? And that's not to mention the completely new way it displayed textures, so they didn't go to a mad blur when you walked close to them. Gosh, Unreal was just packed with brand new stuff.

It did, however, rather quickly get overshadowed.

No one knew how good Half-Life was going to be. I don't think anyone was expecting it to be quite that good. And for poor old Unreal, it came out just a few months later. 1998 became the year of Half-Life. And while Unreal had taken technical leaps, Valve's shooter expanded the sense of possibility so much farther. Oh, and there was the small matter of "Quake vs Unreal".

Quite why games had to be versus one another in the 1990s I'm still not entirely sure, but they really were. You had to pick a team, prefer one over the other, adamantly believe that all following games made in either rival engine were naturally superior. Magazine would pit them against one another, with angry faces from either game glaring at one another across their covers. And I guess it's fair to say Quake won. There was an Unreal II, but it was five years later and made by a different developer. Come 1999 Quake III was released, games suddenly had curves, and Unreal's mid-90s design template suddenly felt anachronistic.

I'm not pretending Unreal went forgotten! But I am arguing that it has perhaps not received the recognition it deserves alongside the Quakes. Playing it today, it's still an absolutely fantastic creation, in a large part due to elements that are woefully absent in shooters today.

By which I mean: space. Obviously shooters now tend more toward spectacle, Sadly this spectacle tends to be things that are happening around you, rather than to you. In Unreal, like in so many of the '90s greats, there's just so much to explore. The architecture in here is wonderful, and levels often surprise you by revealing you've looped around through an intricate castle to find yourself above where you originally started, or connect vast sections together via underwater rivers. While you play the game level by level, in order, each section is so broad, letting you approach many parts in the order you choose.

Or, as I rediscovered, in the order you happen to pick. I'm one of those players who's always so paranoid when given two directions to go in, worried what I might be missing, scarred by too many games that had one be a nice bonus secret, the other a level end you couldn't reverse after walking through it. But in Unreal, you have so many directions you have to learn to just go in one of them, not worry what's down the other, trusting its splendid design to bring you back around to see everything before you go. It's really freeing. 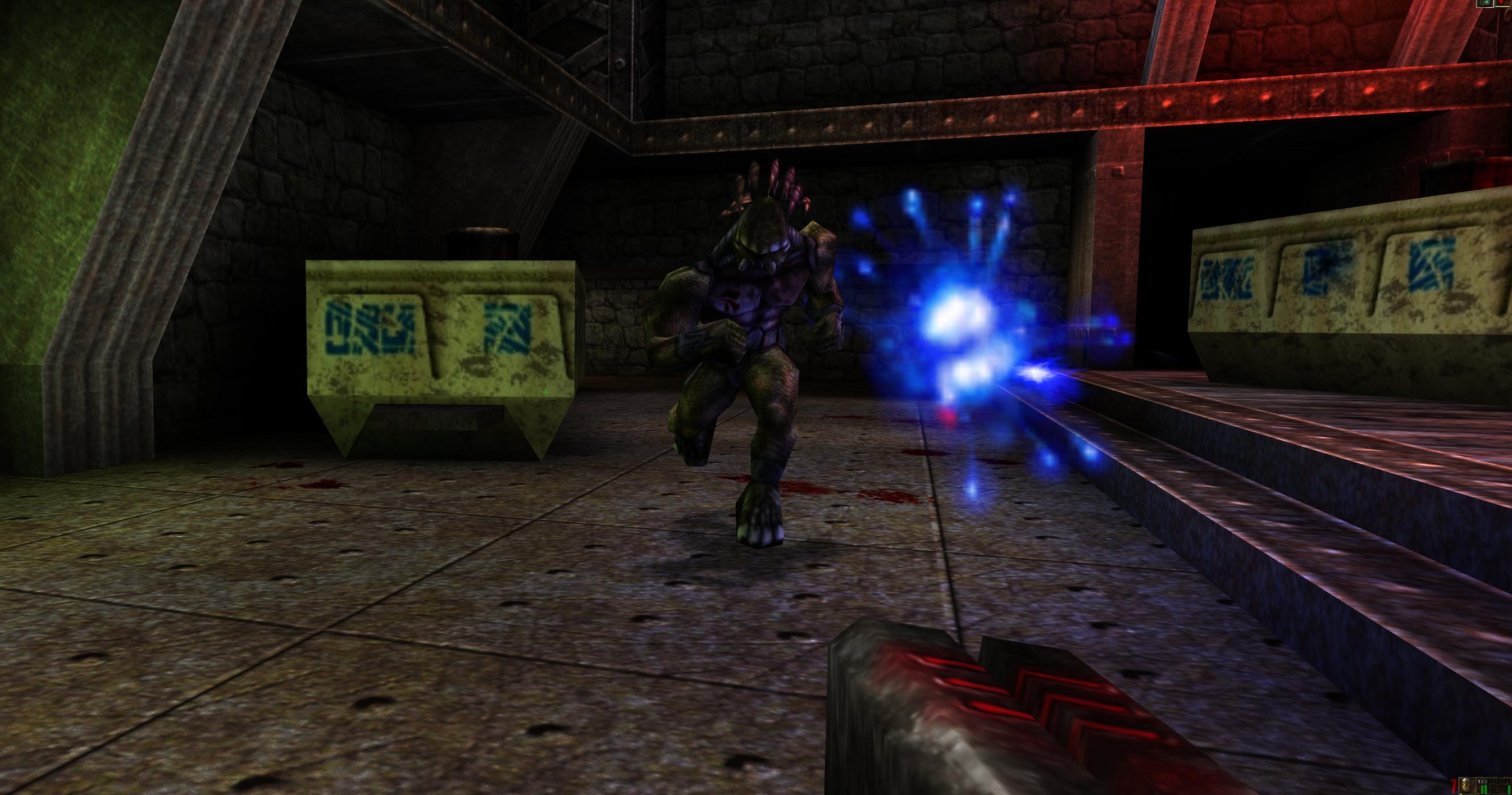 The only thing that really bugs me about it is the jump. It's horrible. Slidey, erratic, and far too often need to be relied upon for progress. It's ridiculous how far you career onward after landing, and then the next jump barely make it off the ground. But then a native Nali will beckon me over, and if I can save his life from the evil bads, he'll take me over and show me a secret cupboard, and I love it all over again. And then he'll stand there coughing, and remind me of the real world, and I'll resent him just a bit. 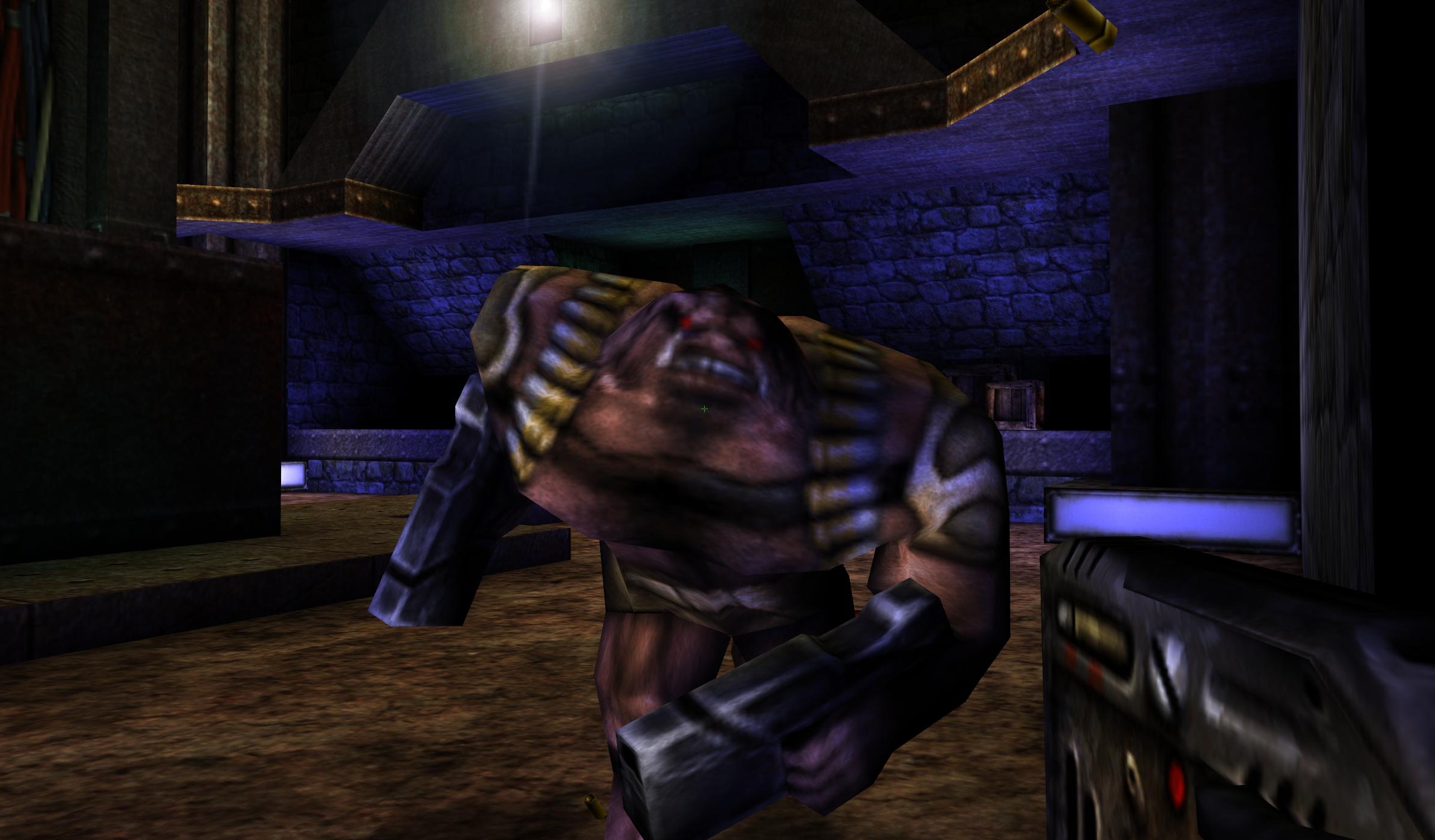 Can I still play Unreal?

Absolutely. It's on GOG and Steam (and reduced to $2.49 on GOG until the 30th), and will play right away. However, you're definitely going to want to get hold of the OldUnreal 227 patch, which sets it running at modern widescreen resolutions, including ultro-widescreen silliness, and tidies up lots of issues.

Should I still play Unreal?

So very yes. It's such a tremendous FPS game, with such excellent enemies to battle, and some of the best architecture in first-person gaming.