Warcraft III was an immensely important game for a lot of people. A fantasy RTS that lead right into the start of World Of Warcraft, it left a big, war-booted footprint on the landscape of games. Odds are, you will have felt its impact even if you never played RTS games, since the original Dota grew out of a mod for Warcraft III's multiplayer mode.

People never entirely stopped playing the original Warcraft III, so when you think about it, a remastered version feels long overdue. In some respects, Warcraft III: Reforged does a serviceable job of fulfilling that need. In others, it's a bit - dare I say - underforged. In further respects still, some people might wish it had never happened.

For the uninitiated, Warcraft III is a real time strategy game (and for the really uninitiated, that's what RTS stands for), where you play as one of several fantasy races (though humans and orcs are the perennial favourites). You build up your base, generate different fighty units with slightly different tactical applications, and then do a war on your nearest neighbours on the map.

The version of me that spent the most time playing Warcraft III is 13 years old. She didn't play many online games, or get deeply involved in custom map building. And that young Alice that is still buried somewhere inside me thinks Warcraft III: Reforged is properly brilliant. It looks just like she remembers the original looking - which is to say, a lot better than the original looked. There is grass, and its blades wave around as if blown by a breeze. The character models and their portraits have been updated, so they don't look like blocky, Statler-and-Waldorfian puppets flapping their big mouth holes. And phwoar, look at the visual fidelity on all that water splashing about.

The campaign remains suitably epic. It starts with an orc being sent on a quest by Raven off of the TV show Raven, and then over its several acts (which include those of the Frozen Throne expansion) we see nations rise, fall, rise a bit again, and then sort of reach a stalemate against an army of demons and skeletons. The three act tragedy of Prince Arthas is, as well we all know, the Warcraft movie series that Duncan Jones should have been allowed to make.

In a way, that story is the most fun thing about Warcraft III. Blizzard had a knack for not taking its fantasy bollocks seriously by means of taking it all extremely seriously, resulting in a silly, juicy game that can maintain a straight face through casual statements such as "Warchief, while you were gone the nearby volcano erupted!". You are cheerfully told that ghouls can replenish their health by cannibalising the corpses of enemies they've just killed. The undead army even has a unit that can carry more corpses for later - a kind of combined catapult and packed lunch which, thanks to the enhanced graphics, you can zoom right in on in order to watch the corpses being monched! 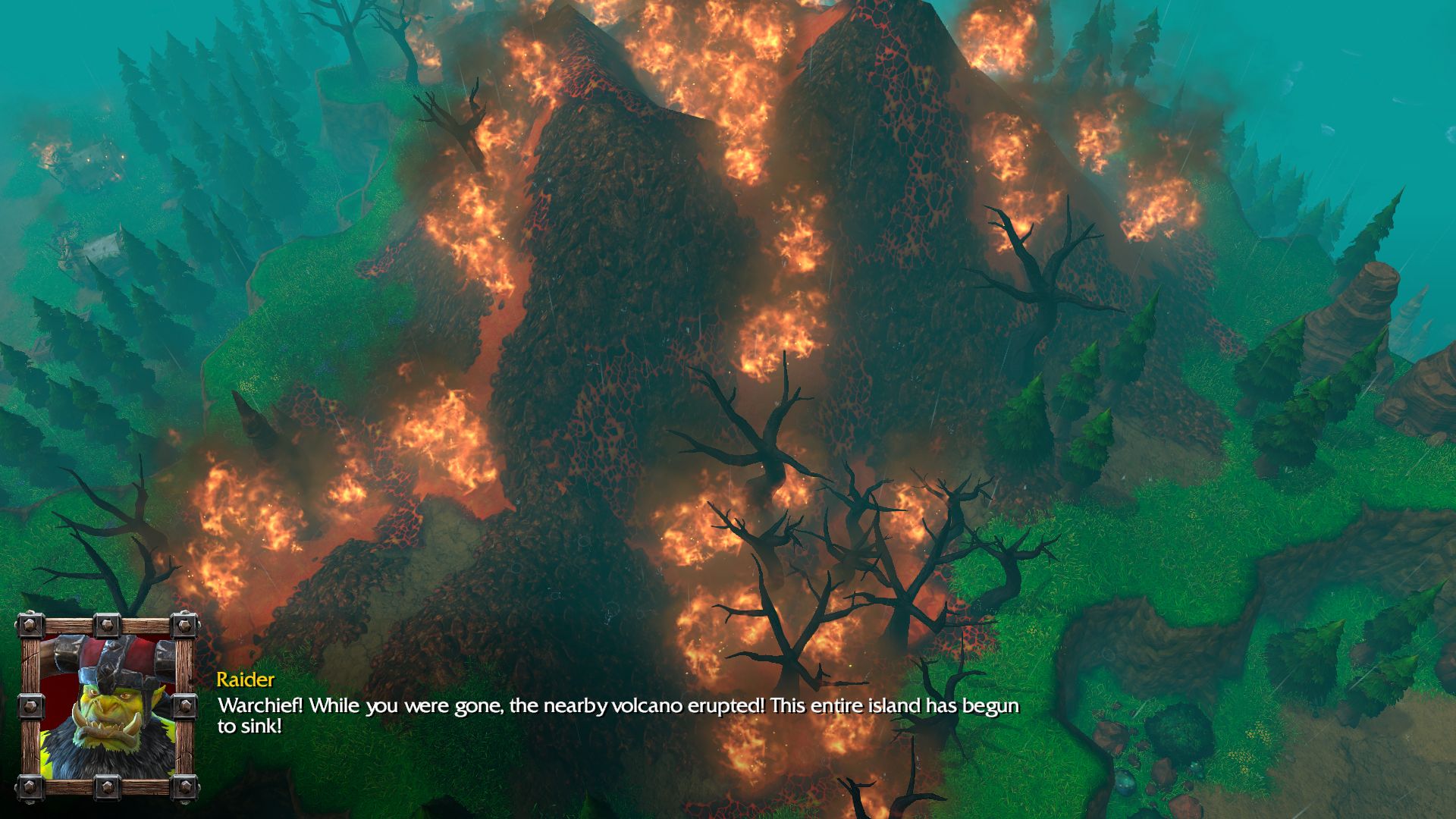 Even the old cheats still work. When I was a kid I thought Keyser Söze was one word, pronounced key-zer-soze, and had some mysterious provenance relating to money, because it's the gold cheat in Warcraft III. This diligent replication of little details is understandable, because if too many changes were made - if, for example, the orc worker unit didn't say "Work, work!" when you clicked on him - there would have been war (although, while we're at it, time has long passed for Blizzard to rethink how they portray e.g. Trolls across the whole company)

But all this fidelity has brought its own problems, since it shows up the fact that the changes that have been made don't go as far as Blizzard initially suggested. Reforged isn't really as bad as all that, and if you haven't had your expectations set that high then, in terms of grass-wafting at least, this is a fine remaster that's clearly had some effort put into it. If you were expecting new bells and whistles based on the promotional material, however, manage those expectations.

The larger issue is that the UI and controls have been left basically untouched. Though 13 year old Alice was delighted by this, she is unfortunately now trapped in the body of a tired 30 year old subsisting on reality television and room temperature cups of tea. Both I and Warcraft III are a lot older than we used to be, is what I'm saying, and it quickly becomes apparent when you spend any length of time in either of our company. 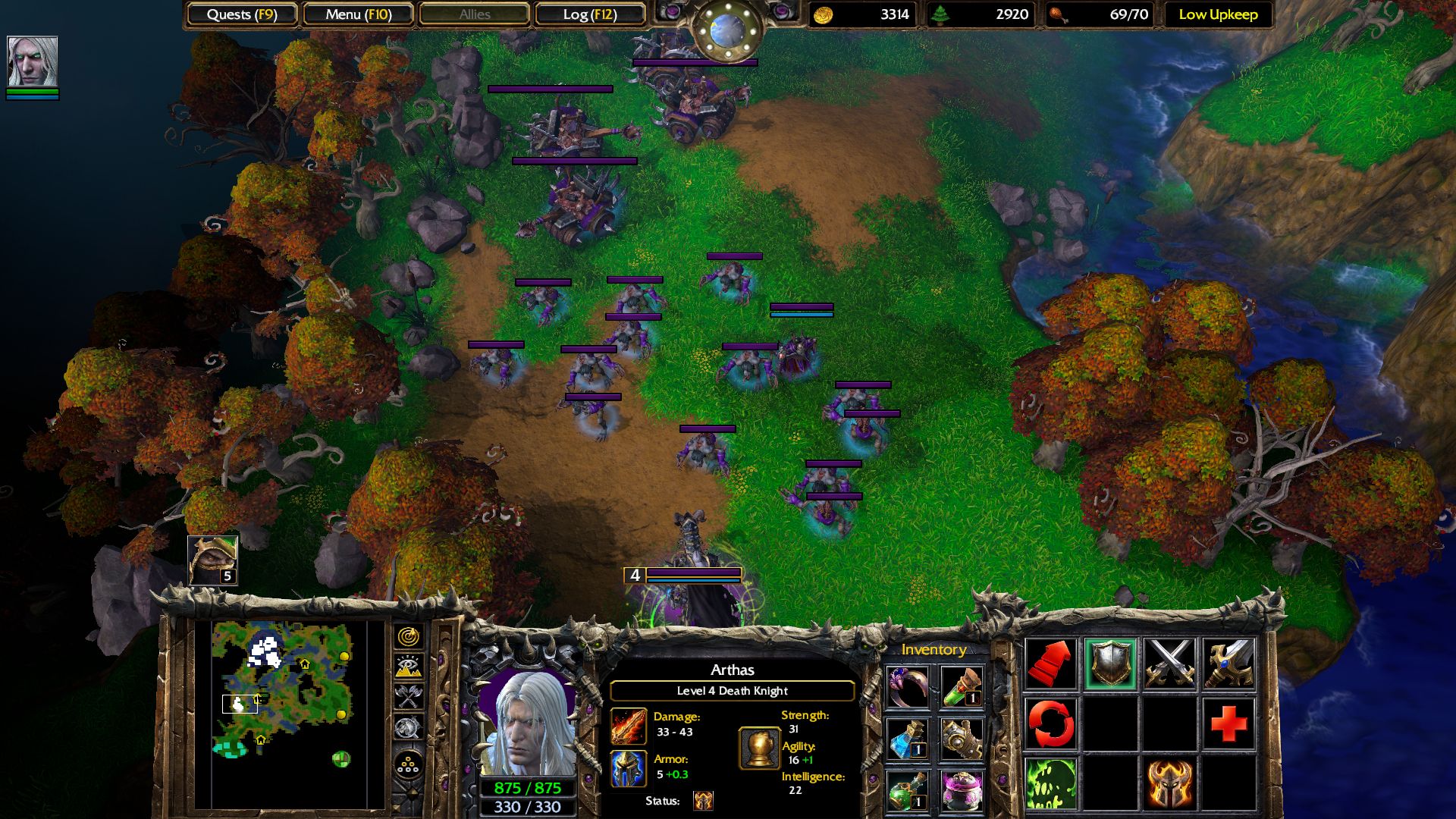 While you can zoom in enough to watch your soldiers standing around scratching their arses, you can't zoom out to a distance that feels practical by today's standards. You can still only control 12 units at once, which is frankly a bit of a ballache, and even more so because the most useful keybindings aren't actually explained in the tutorial. You either have to be a hardened veteran, or find the instructions buried in the menus. Battles themselves, always a bit of a mad scrum anyway, are even more visually noisy because of the nice new graphics. If you're fighting night elves dressed in blue, deep in a green forest, playing as green orcs wearing purple, there's no solution other than permanently having healthbars showing.

Warcraft III has always been a slightly weird mix between building a big army and steamrolling the opposition, and applying some actual tactics. The different factions you can play as are distinct in imaginative ways, and do actually favour different play styles - but then sometimes, if you have enough big lad with swords, the tactics can go out the window. The latter approach is kept in check with a comparatively low unit cap, but still, after mixing all these slightly lumpy ingredients together, Reforged can't help but taste a bit dated.

Of course, the long shelf life Warcraft III enjoyed was mainly thanks to the online community playing together, building a loada weird custom maps together, and making mods. As mentioned, Dota developed from multiplayer maps involving Warcraft III's hero units, for example. And multiplayer works still, as you'd hope. Online matchmaking worked fine for me, and I was happily getting roundly destroyed within minutes. In one particularly humiliating game, the opposing player just kept worrying me with raids, like a cat (an orc cat) toying with a particularly pathetic mouse (an undead mouse).

The map editor where you can build your own terrain is still there, and still just as magical, while being almost completely obscure to use. The much discussed thing, of course, is that Blizz have tightened their ownership belt since the early 2000s, so now any custom maps you make are owned by the company. Even if you wanted to steer clear of Reforged completely, the original Warcraft III is now running through Reforged's client. Some things, like automated tournaments, are gone for good. It all just seems like a bit of a shame.

Reforged, like a lot of remasters today, is good for a run around if all you wanted was to give your nostalgia a long leash - long enough to punch some elves in the face, say. But if Warcraft III was a game you not only once loved, but love still; if it's a game you've been playing for the better part of 20 years... Well. It's not hard to see how Reforged could end up being a bit of a disappointment.