You could accuse Digital Extremes of being a bit on the nose with their latest Warframe expansion. The world is in the grip of a pandemic and up they pop at their annual TennoCon convention (now streamed, for full social distancing) with Heart Of Deimos: a gooey, pulsating update revolving around a trip to a moon in the grip of a parasitic infestation. But unlike real life, on Deimos you can distract yourself from lockdown woes by riding a giant dragonfly. Imagine steering one of those bad boys to Durham Castle.

Watching a private playthrough of the demo, and chatting to the team, I felt bad that they wouldn’t be able to unveil this in front of a live TennoCon audience. All the classic Warframe whoop moments are here: stepping out onto a cliff overlooking a new open world area; watching a sky-blotting worm decapitate another; feeding materials to giant gob that looks like the Little Shop of Horrors plant; seeing your operator hop out their battle suit to take command of a mech… I can see the big cheer beats as they unfold.

But what it loses in energy, it gains in certainty: where TennoCon reveals often infamously vanish for years, everything here is due out in weeks, on August 25. I break down what you can expect in the following video...

As mentioned in the video, I got to chat to studio manager Sheldon Carter about the expansion and the wider process that sees a vast array of features congeal into a coherent update. I’ve long admired the transparency of Digital Extremes - I struggle to think of another game of Warframe’s size that offers such a granular view of its evolution - but I do also wonder if the game might one day become too much. Here are some highlights from our discussion.

RPS: I’m assuming work was well underway on this before 2020 decided to become the year of infection. I mean, you’re on the money with it.

SC: This is definitely one of those updates where we’re lucky - we usually have a few irons in the fire, so this wasn’t exactly the way we started off 2020. But it was one of those things: you started adapting and seeing where you want to go with it. We always have teams forging forward, trying new things. We’ve always loved the open worlds in the game so we were forging forwards with this - we just moved up our timeline on it so we’d have it in time for this. 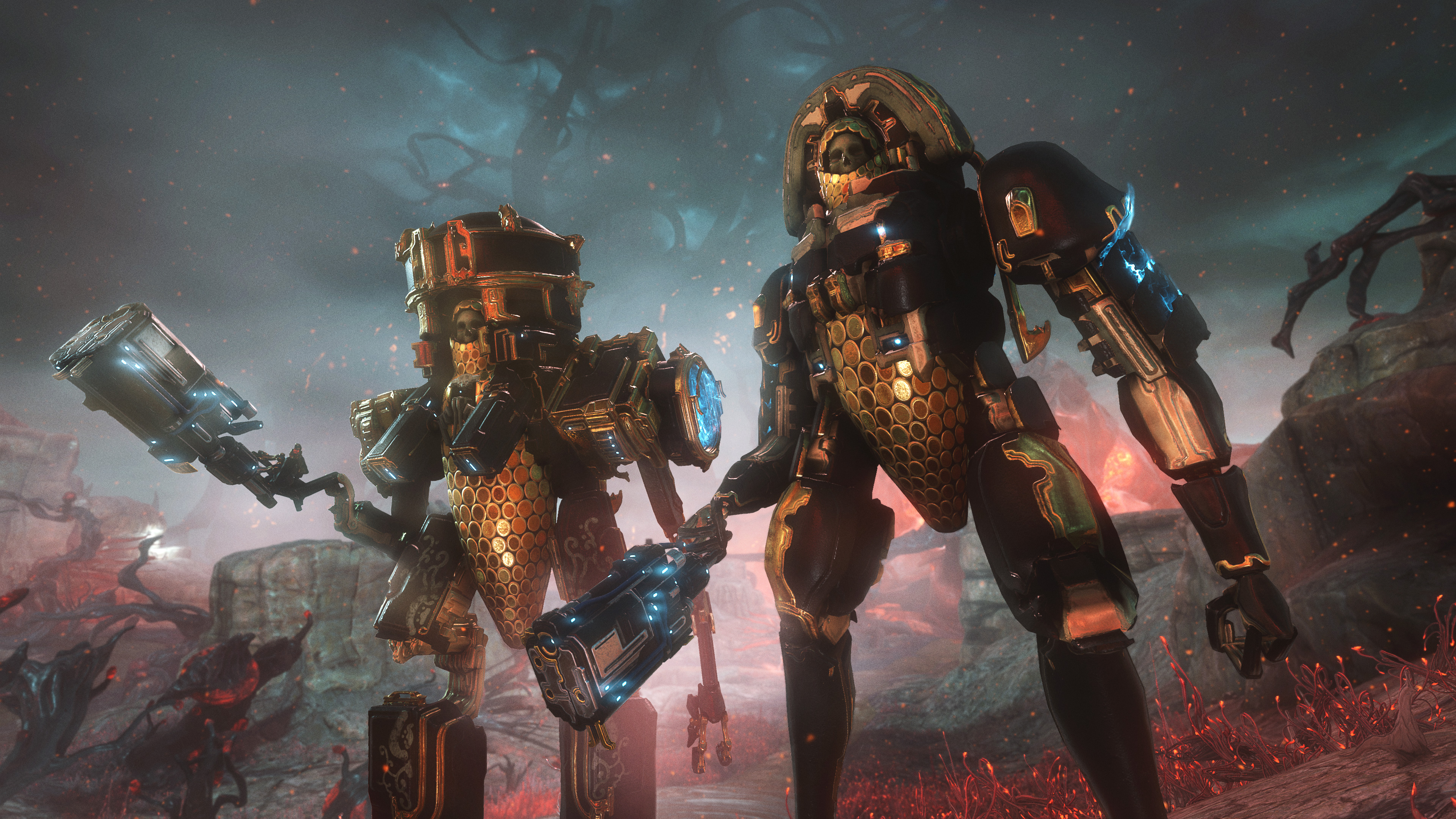 RPS I’m interested in how the feature set of these updates come together. Do you start on day one with a complete vision for Heart Of Deimos, or does it form from individual things you’re working on? Here you’ve got the open world and the Helminth system - were they always destined to have a thematic link, or do you fit one to the other?

SC: It’s funny, we were talking about this last night. We were doing a dry run [of the Tennocon demo] and the word that keeps coming up for us is kismet. It’s serendipity that these things happen, because in Xaku [the newly revealed, 44th Warframe] we have a frame that’s basically a whole bunch of different warframes jammed together; we have the Helminth system, which is actually letting us use the infested to take warframe abilities and put them on to the warframes, and it’s becoming part of something that’s an infested home planet. It’s like we planned this… we didn’t plan it at all!

These are three different things that we kinda had going. We always knew the Helminth system was going to be infested, and we knew that would be the feel and theme of it. And we’ve been working on it for a while - our players would tell you that they’ve seen this chair. For a long while it’s just been a zit popper in Warframe, so for a long time we wanted to bring it up. And so these are three things that were individually going independently, and then it kinda just all worked when we started putting together what we wanted to do.

And then what was nice was that you could let it influence each other. That’s a thing I really liked about it. Because we have these things in the hopper we’re able to say ‘look, it would be really cool - we have the Entrait, this Void researching group, and Xaku is made of Void energy so that really fits…’ It’s really cool when you have a lot of things going, a lot of creative people talking about the same thing. All these kismet moments come up. 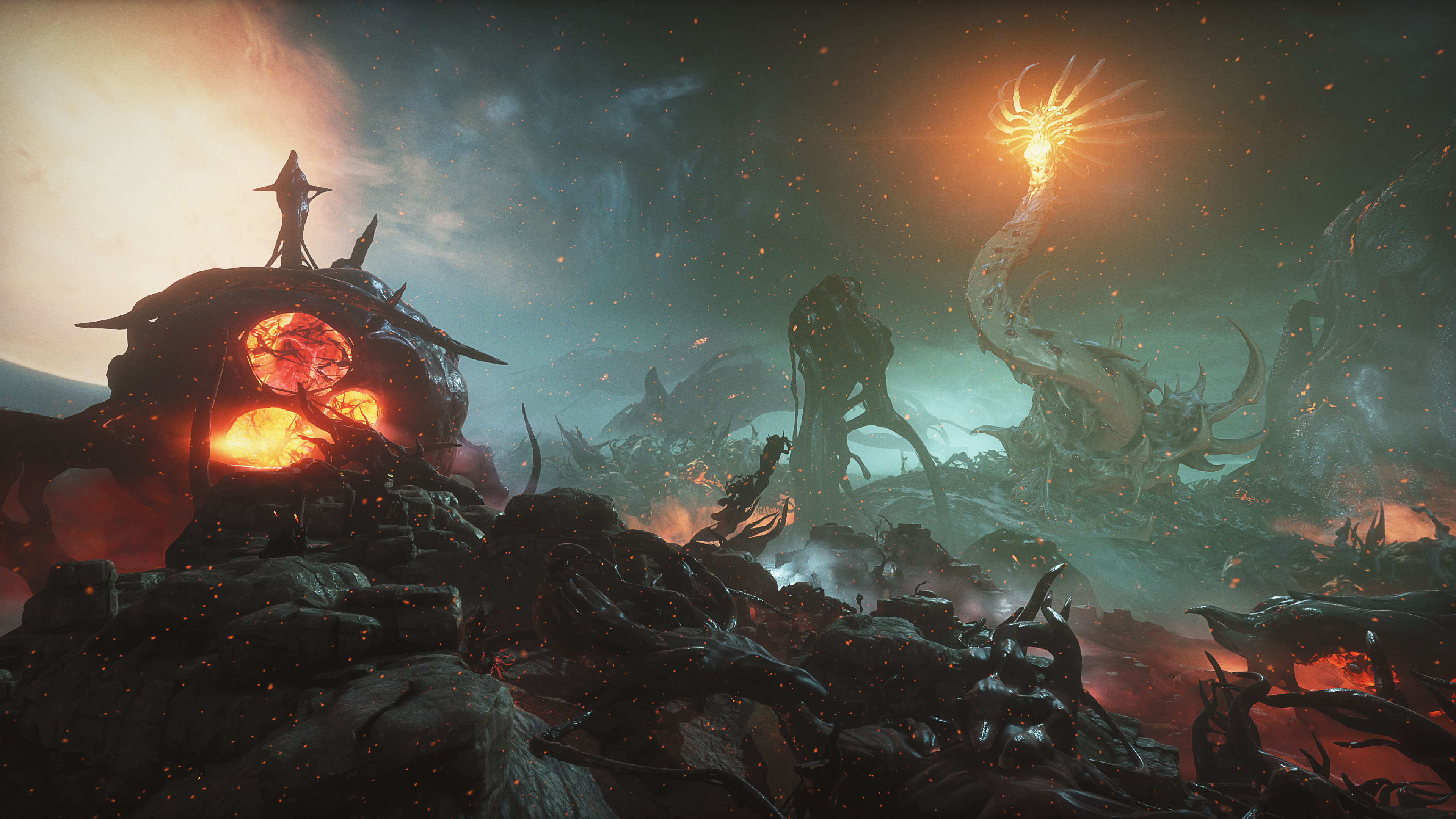 RPS: When I spoke to Steve [Sinclair, creative director] at last year’s TennoCon, he was saying that he wasn’t as interested in another wodge of content to be ticked off. That a thing like Squad Link [a big reveal last year] was designed to create connective tissue - it’s a bigger idea. Deimos, to me, looks like a wodge of content - a new open world - but I’m wondering if the Helminth system is another of those big ideas. You are fundamentally doing something that ripples through your whole character roster.

SC: That’s a great way of putting it, and even when I look at Deimos in general it’s one of those ones where it’s not the biggest open world we’ve ever made. But it’s the deepest, the most compact. There’s so much stuff to go and get into and I feel that’s the same thing with the Helminth. Instead of a broad system that feels like ‘oh my god, it’s all these different things, it’s all these different places and changes everything’... [Helminth] does, but changes it in a tight way. So it’s kind of taking that same idea, but instead of being about breadth, I guess it’s about details. That’s kind of where we went with Deimos in general. 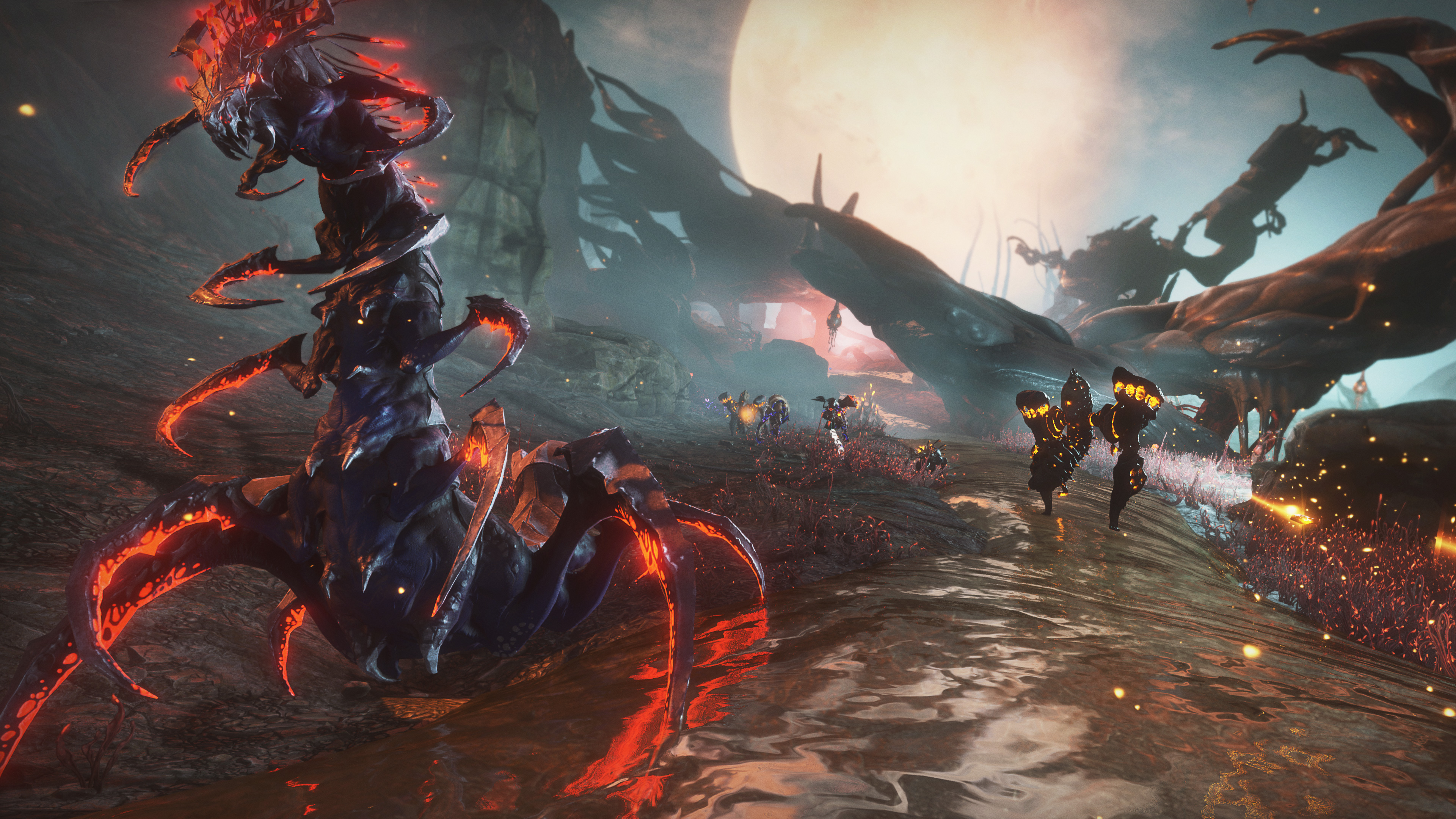 RPS: As you add more and more features and areas to the game, how does Warframe feel to you, as a thing to steer? Does it feel like you’re sitting on this unwieldy thing?

SC: It can be. I think a lot of the time the core ideas we have, the core fantasy of the game, is what us, as a core team, keep trying to drill into. Whether it’s something small, like the community saying ‘we wish we could shoot on K-Drive’, so let’s make sure that when we put in the pods that you can shoot off these guys. It’s like trying to keep our vision for what the game should be, that space ninja fantasy, is what we keep going back to. So as long as we are still kind of in there and we’re weird in the way we want to be - and the Helminth system lets us be weird in the way we want to be at the same time - that’s what helps keep the vision alive for the product that we thought of ten years ago. It keeps us excited about it.

The other thing I think is neat is that we have this incredible staff, and we keep having people coming up who’ll take these systems and they’ll love them for themselves. So, Helminth was really helmed by Pablo, for the longest time he was a UI programmer, and now he’s one of our most creative senior designers. We’ve evolved as a staff and as a game at the same time.