I played a little bit of Warframe [official site] a long time ago, when it was in a much more limited form. I quickly bounced off it.

Several years of updates later, at first glance Warframe looks like a very different beast. I jumped back in for the Plains of Eidolon expansion, which adds an open-world zone for players to fly, shoot, fish and mine their way around. It’s a major divergence from the corridor brawls the game has offered up to this point, but it's not an escape from the relentless grind.

[I should note up front that since I played, the devs have released a hotfix that reduces the grind and fixes some other problems I mention here. What are games like nowadays eh, improving themselves before critics have had time to weigh in. Where appropriate, I've mentioned the specifics of the changes and how they might address my criticisms.]

I’ll get to talking about the expansion in just a minute, but first I’ll get any non-Warframe veterans caught up on what the game’s about. It’s a free to play, multiplayer third person shooty/slashy action RPG, with the titular Warframes each providing a different skillset. The one I’ve been playing with, Excalibur, has a sword that can cut through most enemies like butter as well as blinding them.

As Alec noted in his review, the combat is meaty and satisfying. I’m a big fan of my bow, which can pierce through multiple enemies and pin them to walls. Acrobatics play a large role in every fight: aiming while twisting through the air slows your movement slightly, making you feel like the cyber-ninja you’ve always wanted to be as you headshot foes while sailing over them.

Trouble is, a lot of that ninjaing takes place in repetitive environments with even more repetitive mission designs. There are story missions with set pieces that mix things up, but reaching them means playing through uninspired levels that have you hacking or defending some computer gubbins, or just killing every enemy. There’s no real sense of escalation - it’s a case of sticking things out until the evac point appears. Plains of Eidolon adds a new chain of story missions for low-level players, which helps stop the game from feeling grindy quite so immediately. 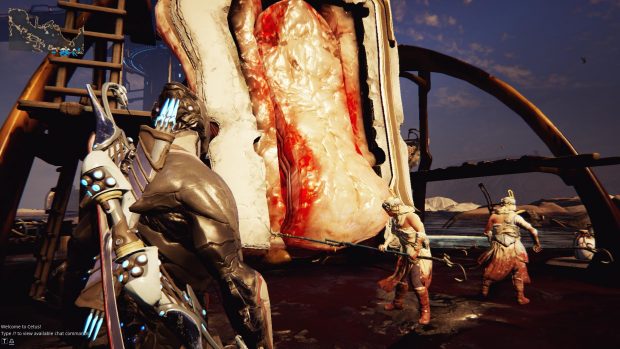 To get to the plains, you need to wander through Ceta, a new hub that takes the form of a crowded marketplace. It’s part of a town that’s built around an old ‘Orikin tower’, a structure that’s made from synthetics and meat which the natives harvest to survive. The harvesting is a suitably grimy looking activity that gives Ceta an aesthetic you’re unlikely to have seen before.

It’s packed with a confusing array of vendors, and when I first played it wasn’t immediately clear which ones are set dressing and which ones you can actually interact with. With the recently applied hotfix, the real shopkeepers are highlighted on the minimap. Of course, even when I did manage to talk to vendors they inevitably tried to sell me things I didn’t understand for a unique currency that I a) didn’t have any of and b) also didn’t understand. It turns out they use Standing, which you earn by doing stuff for the Konzu, a new quest-giver who I had managed to miss while heading to the plains.

When I did get out onto the plains, it happened to be night time. The new zone is on a day/night cycle, with 100 minutes of day time passing followed by 50 minutes of night. When it’s dark, the normal enemies hide in their camps and higher level baddies roam the zone - ones that could easily vaporize my under-leveled character. When I returned in daylight, I could just about defeat the enemies closest to the gates. When I ventured more than a minute or two away though, I went back to being annihilated - so I mistakenly got the impression that the plains weren’t accessible straight away. 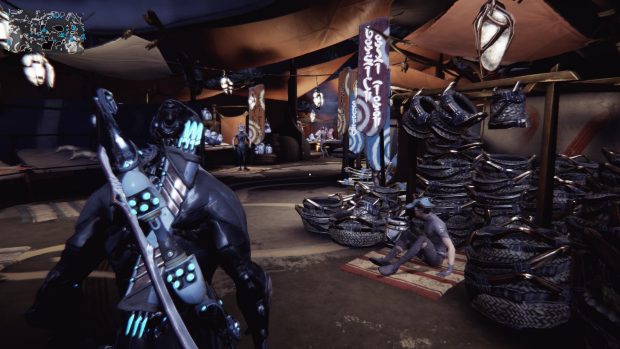 I realised my mistake later on, and it was my mistake, but this one issue feeds into a broader problem the game has with clarity. Information is often poorly presented, from the upgrade and currency systems to the mission select screen with its overwhelming number of relays and gates (separate things, it transpires), as well as in-game stuff like your health being displayed at the very top right of the screen.

In fairness, some of the problems are partly a consequence of just how deep customisation goes. I mean, look at this tip that comes up on one of the upgrade screens - “Capacity is the larger of your master or weapon rank, and is doubled if an orokin reactor or catalyst is installed”. That’s five separate systems I had to look up before I could even parse one sentence! And don’t get me started on reversing the polarity of individual mod cards. 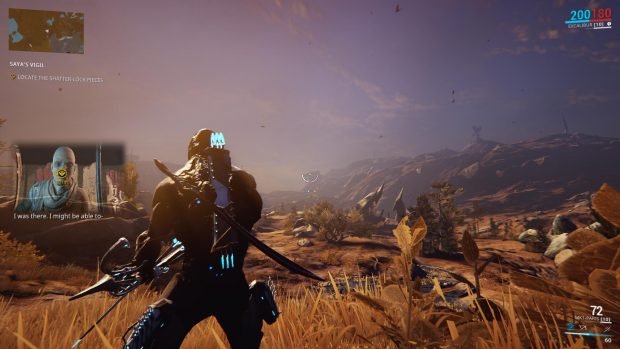 I found Konzu when I noticed a herd of players gathered around him. He dishes out bounties, which are like story missions in that they launch a separate instance of the plains. Warframe hasn't suddenly become an MMO so the plains will only contain the players you bring with you directly. Bounties are split into three sections, with a random objective for each like escorting a drone or destroying supply caches. For one of them, you’re given four minutes to seek out crates in a wide area. Whenever it came up, I struggled to find even one of the damn things before my time ran out. That’s another thing the hotfix has improved: you can now use a scanning tool to find the crates, and there’s a more generous time limit.

The best reason to visit the plains might be the archwings, if they weren't so hard to acquire. Archwings are jetpacks that have previously only been usable on special space missions, but if you don’t already have one and are a beginner like me, don’t get too excited. You’ll first need to reach mastery rank 2, then complete a quest chain to unlock the Archwing itself. After that, to actually use it out on the plains, you need to get your hands on an archwing launch segment. They’re one-use only, and you can get a pack of 50 from the store for $10 - but you’ll have to spend at least $20 because the cheapest money packs are just over $10.

If you don’t want to spend real money, you’ll need to sink a considerable amount of time into gathering the materials to craft them - though much less with the hotfix, which more than halves the resource cost. Gathering those materials involves simple tasks, and requires fishing and mining tools, which have to be bought with Standing, the currency that can be earned through completing bounties for Konzu. When I played, the rewards felt pretty measly, though the devs have now doubled the amount of Standing you get from each bounty. 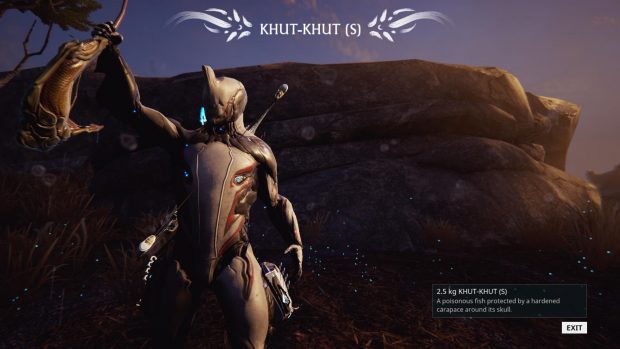 It's frustrating that an element as (potentially) enjoyable as archwings is gated behind a good chunk of money or hours of grind. With the hotfix, you should be able to get your hands on one in a much more reasonable amount of time, but I haven't had the chance to play with one myself, or to determine exactly how much time is required.

I’ve been too busy moaning and trying to understand all of the terminology to mention how gorgeous the plains look. While the armour and weapon designs are flashy, I hadn’t really considered Warframe a good looking game until I reached the open area. It’s particularly alluring at dusk, when the sun casts a glow over the battlefield. The plains are a graveyard, where massive creatures battled aeons ago - and some still remain. I only got a quick glimpse of one of them in the story mission, but groups of high level players will be able to take down the Eidolons that wander around the, ah, Plains of Eidolon at night. They’re hulking beasts of sinewy muscle and glowing lights, with the same meaty/synthetic aesthetic as Ceta. 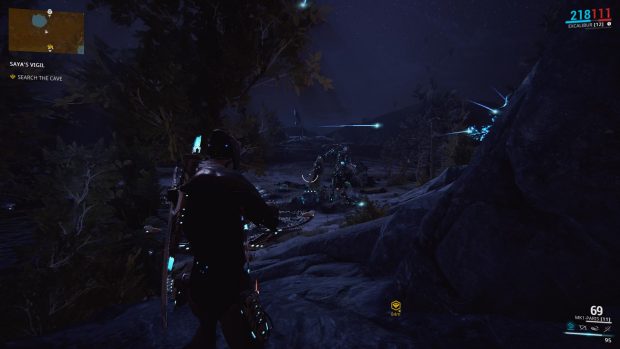 It’s a good look, and the plains might be worth exploring for people who long for a grislier, stranger slice of sci-fi. Even with the hotfix changes, however, Warframe will always be a game that demands considerable chunks of your time. This expansion might be more streamlined, but the bounty quests that form most of the actual content suffer from the same problem as the repetitive missions that have come before it. Interacting with the residents of Ceta makes the tasks you do seem a bit more meaningful, but at the end of the day ‘task’ still feels like the right word for them. In that regard, I'm not convinced the Plains of Eidolon constitutes much of a change in direction for Warframe after all.