War, the crafty old bugger, has changed yet again. When you queue up for "quad" mode in Call Of Duty: Warzone, you'll now have to battle (royale) it out amongst 199 other players. That's 48 extra, and Warzone's map certainly seems big enough to accommodate them. The solo, duo and trio modes all still only go up to 150.

The "Season Four Reloaded" update has also chucked in a new contract, a sniper rifle, and a separate spotter's scope item that lets you peek at distant hills without having to worry about glint giving you away. There's an upcoming new mode where someone gets to have a go with a mini-gun and put on fancy "Juggernaut" pants, too. I think. These are some very confusing patch notes.

We'll get to that, but first: I like the sound of these new Supply Run Contracts. When you pick one up, you've got to leg it to a designated Buy Station, and "reach it within the time limit to get a discount on Buy Station purchases". That's a neat reward, and more interesting than plain old cash. It's good that the developers keep thinking up new directions to take Contracts in, and that they seem to have now decided that this is one case where more is better.

The new sniper rifle is the Rytec AMR, billed as "one of the deadliest semi-automatic anti-material rifles an Operator can get their hands on". You can apparently "use the included picatinny rail to Gunsmith it out to the situation at hand", if you can parse that and happen to already know what a picatinny rail does. The Gunsmith is where you put extra attachments on guns but they say this one is already included, so I am baffled. 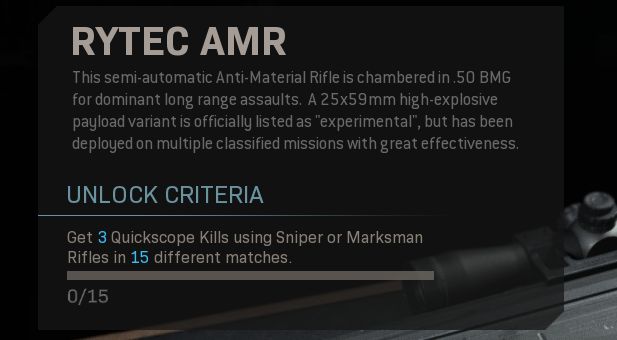 The patch notes also talk about the "Juggernaut Royale Mode" as if it's gone live with the rest of this, but it doesn't currently appear alongside the rest of the modes. This apparently involves finding "one of the airdropped care packages to become the Juggernaut and use the mini-gun to attack enemies and vehicles". Once one Juggernaut is sent to the Gulag, another Juggernaut suit gets dropped. The Juggernaut suit is currently a killstreak reward in normal multiplayer that lets you use a special weapon and soak up loads of damage, but it's not clear if this is exactly the same or a tweaked version. It seems a little odd for a whole mode to revolve around this, and the update notes are badly written enough to make me wonder if this is actually an addition to the normal battle royale mode. Nobody on Reddit is talking about it and I haven't had a chance to play a full game yet so honestly, who knows.

There are also bug fixes, and new stuff for plain old Call Of Duty: Modern Warfare multiplayer I haven't mentioned here, so do check out those patch notes. A more condensed version can be found here.

"Gunsmith it out to the situation at hand". Good grief.