The Watcher is the best thing to hit Slay The Spire since sliced fungi beast. She's the new character currently lurking on the beta branch: a monk for whom deck balance is unprecedentedly essential. She's all about flowing in and out of different stances, dishing out unseemly damage, but then taking unseemly damage if you can't play a card that stops her being so angry. In the late game, a single turn will see you pivot between stances more often than two coked-up adolescents on a see-saw.

That looks a little bit like this, if you're curious.

I've built this particular deck far better than I can play it. I get so swept up in stance-switching shenanigans that I don't watch my damage numbers, and wind up flat out wasting many of the cards I've painstakingly earned. Not that it matters.

I start the turn calmly, as you can tell from the blue squiggles sweeping over the Watcher. I think it's supposed to be a river, which soon runs red with blood as I play a card I've retained from the last turn that tips me into Wrath mode. Leaving the Calm stance normally gives you two extra energy, but my fancy lotus flower Relic means I get three. I use some of that on Lesson Learned, which does a whopping 30 damage while I'm wrathful, but also permanently upgrades a random card whenever I use it to kill something. (Don't tell anyone, but snagging that card early on is the main reason I made it this far.)

Out comes Sands Of Time, a 56 damage dealer I can only afford because it's gotten cheaper while I left it sitting in my hand for a few turns. With only one slime left, I play Empty Mind - dodging its energy cost thanks to a card I played several turns ago. That takes me out of Wrath, bringing back my two copies of Flurry Of Blows. I'd already played these twice, because they woosh back to my hand every time I swap stances. It's not quite enough, and I'm completely out of energy - but I've clung on to the Miracle card I started the encounter with, thanks to the Watcher's starting Relic. I pop it to play a basic strike card that ends the fight. That's three enemies slayed in one turn, two of them from full health. Not half bad. 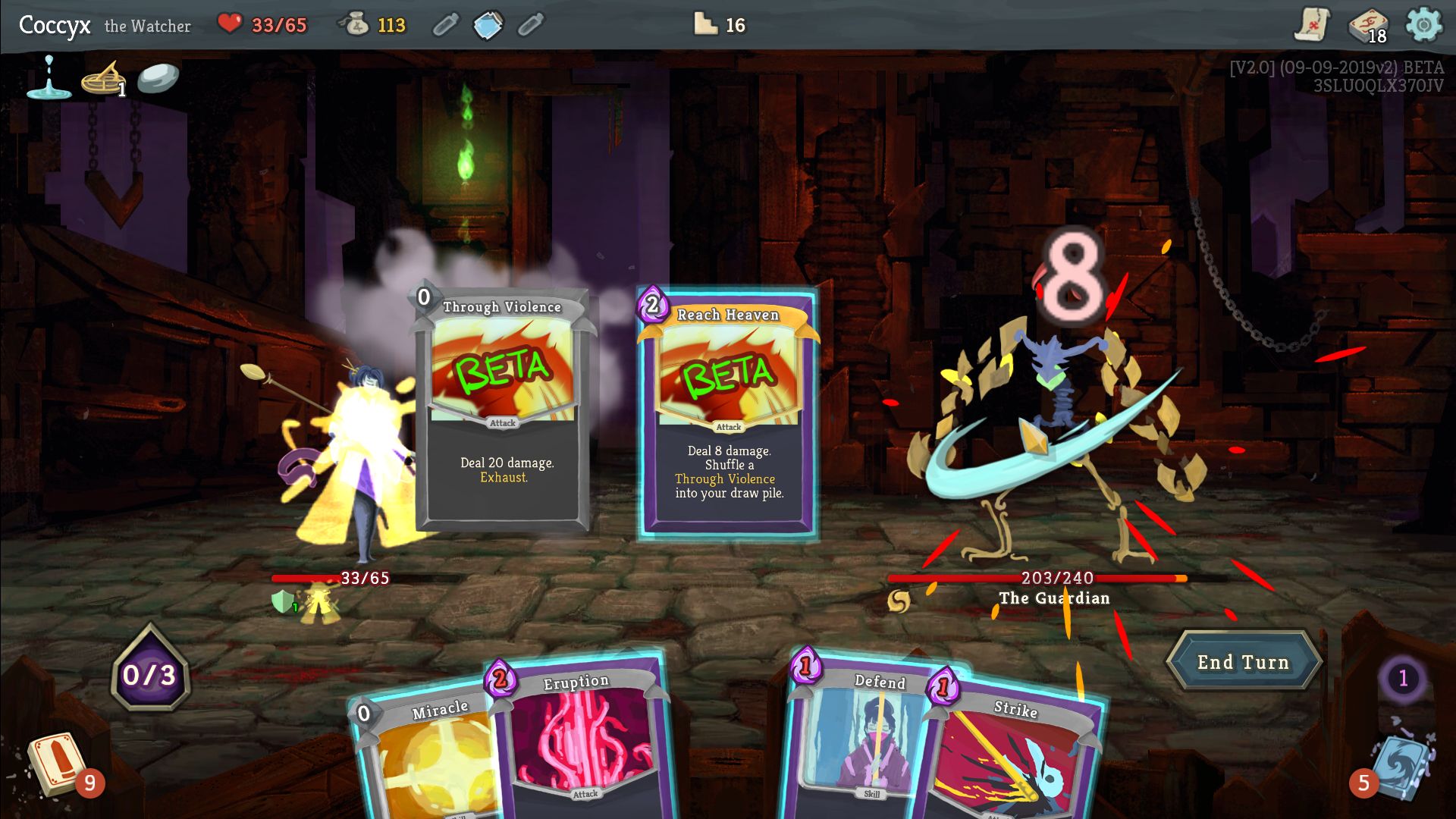 I will say that the Watcher is by far the most draining character to play. Many of her cards are about setting up future bursts of violence, either letting you store cards between turns or prune out unwanted ones from your draw pile. You didn't see me play Omnisience, a card that lets you pick exactly what you're going to draw next turn. You didn't see me enter Divine mode, either, which thanks to a power card was building up to the point where I could deal triple damage for a turn.

Like with the other characters, part of the appeal is bound up in a thematic resonance of playstyle and character. This monk alternates between aggression and defensive passivity, but it's always measured. Calculated, with survival tilting on a knife-edge.

The Watcher makes me draw on knowledge I've earned over more than a hundred hours of climbing up the Spire, and deepened my appreciation of a game that's already devoured dozens of my evenings. I didn't think that was possible.