Henry Cavill, everyone's favourite Super-Witcher-Warhammer-miniatures-painter-man, has recently built himself a new gaming PC, and he's documented the whole thing in a lovely, if very occasionally heart-stopping video post on Instagram. His choice of components is actually pretty sound, ranging from a top of the line Ryzen 9 CPU to an RTX 2080 Ti graphics card, but it turns out that even his Geralt Witcher sense isn't strong enough to tell him which way round his CPU is meant to go on his tiny motherboard.

He starts off by very sensibly flipping through the instruction manual for his motherboard, hopefully absorbing which bits do what and where everything's meant to go. AMD's 3rd Gen Ryzen CPUs can be a little harder to install than their Intel counterparts, you see, thanks to all those hundreds of tiny pins on the bottom. Accidentally bend one of those tiddly metal prongs by sticking it in the wrong way and it's goodbye gaming CPU.

And he starts off so well! He carefully lines up the pins, but then the video halts with a big NOPE! message like he's done something wrong. "They gotta fit right, you gotta be gentle," the message goes on to say, which thankfully Cavill didn't voice himself because otherwise I'd actually be deceased right now.

The video cuts back, it looks like he's about to do it... BUT NO. The CPU is back in the air, hovering in a cloud of indecision. He goes in again, attempts to secure the socket, but again Superman is THWARTED. My heart can't take it. My hand has been gnawed into a bloody pulp it's so damn stressful.

But then the Barry White backing track does a big, sexy sigh and sweet lord the CPU is finally secured. Holy. Moly.

It's vaguely hilarious that Cavill has done such a painstaking job trying to blur out all the model names and manufacturer logos in his PC building video, even though it's patently obvious it's a load of AMD, Nvidia and Asus-made gear. For example, he's taken care to blur out the big Ryzen logo on his CPU, but has left the all important model number above perfectly visible. Or sort of visible. It's a bit grainy, but it looks like he's picked either a Ryzen 9 3900X or a Ryzen 9 3950X. A most excellent choice, if I do say so myself.

Thankfully, the rest of the video is pretty plain sailing. Except for the bit where his NZXT cooling radiator plops out of his case when he turns it up on its side. And the bit where he spends an entire night trying to figure out where all his power supply cables are meant to go. And when his radiator falls out of his case for a second time. And when he seemingly contemplates the meaning of life as he works out how to install his graphics card when his CPU cooler pump wires are in the way...

Actually, I take it back. The whole thing is a disaster. If only he'd found my handy How to Build a PC guide. He'd have been done by tea time.

Eventually, Super Cavill does get it working, but the real kicker is when the LED display on his CPU cooler reveals the poor lad installed it UPSIDE DOWN. Oh Henry, bless you. You are too good for this world. 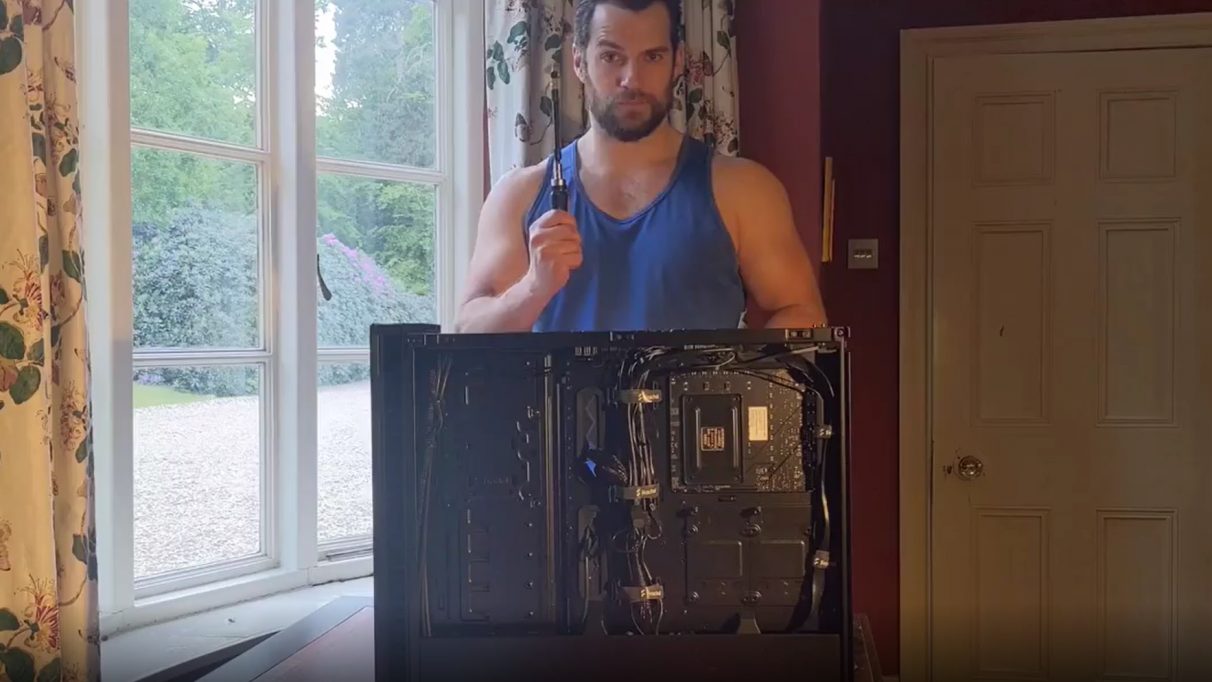 Unfazed, he comes back on Day Two of his now PC Building Epic and deploys what shall henceforth be known as the "magnificent uber screwdriver" (pictured above). He beasts off that pesky radiator cooler and gets to work, carefully cleaning his precious new CPU before applying another loving layer of thermal paste, all the while treating us to another sexy disco tune. It's actual magic.

Then, finally, IT'S PC TIME, BABY. And what a good looking system it is, too. Well done, Geralt. You earned a good rest after that.