SSD prices may have been falling over recent months, but adding a super fast NVMe SSD to your PC is still one heck of an expensive upgrade, especially if you're after something like our SSD champion, the Samsung 970 Evo. A 250GB stick of Evo goodness will set you back around £80 / $85 these days, with prices pretty much doubling if you want to move up to 500GB. There are cheaper NVMe SSDs around, of course, such as the competitive Adata XPG SX6000 Pro, which currently goes for £54 / $57 for 256GB, but you're still looking at around $85 / $100 if you'd prefer the extra leeway of a 512GB stick.

Enter the WD Blue SN500, Western Digital's new entry-level NVMe SSD that starts at just £47 / $55 for the 250GB model, and a mere £69 / $78 for the top 500GB version. On paper, it's nowhere near as fast as its more expensive competition, but in practice the Blue SN500 puts up a surprisingly good fight, offering excellent value for money for budget-conscious buyers.

I was sent the 500GB WD Blue SN500 for review, whose sequential read and write speeds top out at a rather modest 1700MB/s and 1450MB/s respectively. The 250GB model, meanwhile, has the same sequential read speed but a slightly slower sequential write speed of 1300MB/s. Regardless of which capacity you go for, though, both sets of figures are a far cry from the high-2000 / low-mid 3000MB/s figures you'll see quoted on the boxes of other rival NVMe SSDs. For once, however, they're actually reasonably accurate.

When I put the 500GB Blue SN500 through AS SSD's 1GB sequential test, for example, it returned a read speed of 1288MB/s and a practically bang-on write speed of 1424MB/s. Other SSDs, including WD's own Black SN750 model, are usually at least 1000MB/s short when I've put their sequential read speed to the test, and a good 500MB/s behind their quoted sequential write speed, too.

Already, then, the Blue SN500 feels like a more honest buy than other NVMe SSDs out there, and it continued to impress when I put it through AS SSD's random speed tests as well. After all, sequential speeds aren't really a very good indicator of how an SSD will perform in every day use, as they rarely read and write data in nice adjacent blocks. Instead, they're fetching bits from here, there and everywhere, which is why having a good random read and write speed is so important.

Indeed, the Blue SN500's random read speed of 44.5MB/s is right up there with the very best NVMe SSDs around, putting it neck and neck with WD's Black SN750 and slightly older Black 3D NVMe SSD and only 10MB/s or so behind Samsung's 970 Evo. That's impressive for an SSD of this price and miles better than the 25MB/s random read speed of Adata's XPG SX6000 Pro. 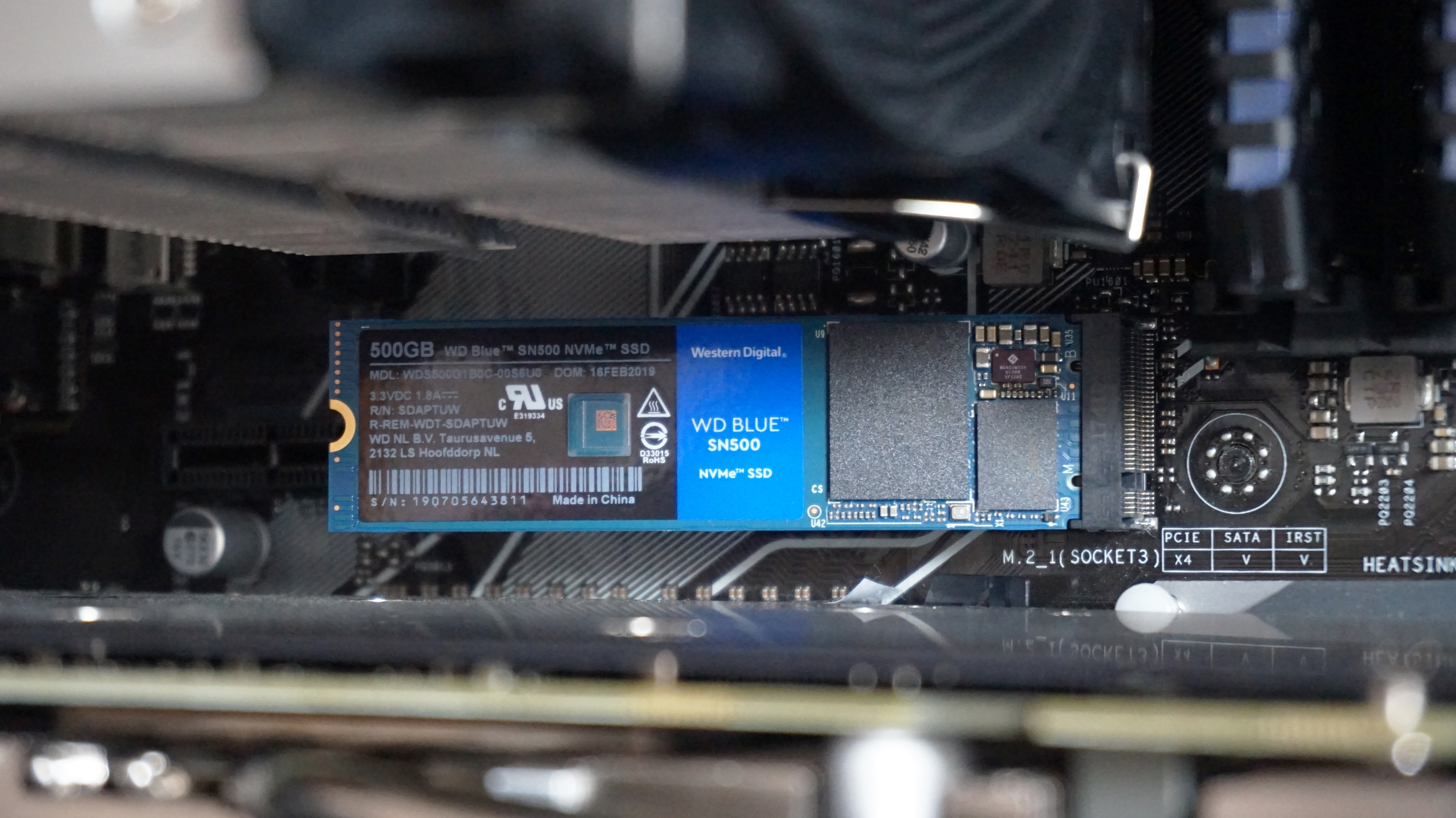 Admittedly, the Blue SN500 drops the ball a bit when it comes to random write speed, but I'd argue its score of 131MB/s is still perfectly acceptable given its low cost. Sure, you'll get closer to 145MB/s on the Adata, and almost 170MB/s on the Samsung or WD Black SN750, but are those extra seconds / minutes really worth paying almost double the money? I'm not convinced.

Moreover, you're still getting a significant leg-up over traditional SATA SSDs as well, such as the similarly-priced Samsung 860 Evo, whose 250GB model can currently be had for £53 / $58, and 500GB stick for £78 / $78. This produced random read and write speeds of 40MB/s and 98MB/s when I tested it last year, making the WD Blue SN500 much better value for money overall.

In fact, as long as you've got a motherboard that supports NVMe SSDs, then you'd almost be silly not to get the WD Blue SN500 at this price (£47 / $55 for 250GB and £69 / $78 for 500GB), especially if you've been eyeing up something like the 860 Evo as well. The Blue SN500 isn't just faster than a SATA SSD, after all - it's also easier to install, slotting straight into your motherboard without the need for any pesky cables. Throw in a nice five year warranty as well and you're laughing. It's my new winner, and has even made it onto our roundup of the best SSDs.