I think difficulty is one of the most under-solved problems in game design. We've barely started to break out of the assumptions and principles that were concocted to keep people putting quarters into arcade machines. So I'm excited and delighted when a game comes up with something smarter than Easy/Normal/Hard, and 868-Hack is one of those rare games.

You're a smiley face - I've always thought that about you - moving around an 8x8 grid shaped by circuit-board-looking walls and vaguely Pac-Man-like enemies. Attacking these enemies is just a case of trying to move towards them; your smiley face stays where it is and fires a laser at them. Most have two health, but each has a twist - one type moves two tiles at a time, another has three health, another is invisible until in your line of fire. These enemies teleport into the level one at a time, at a pretty manageable rate - early on, it's not hard to kill them faster than they can spawn. 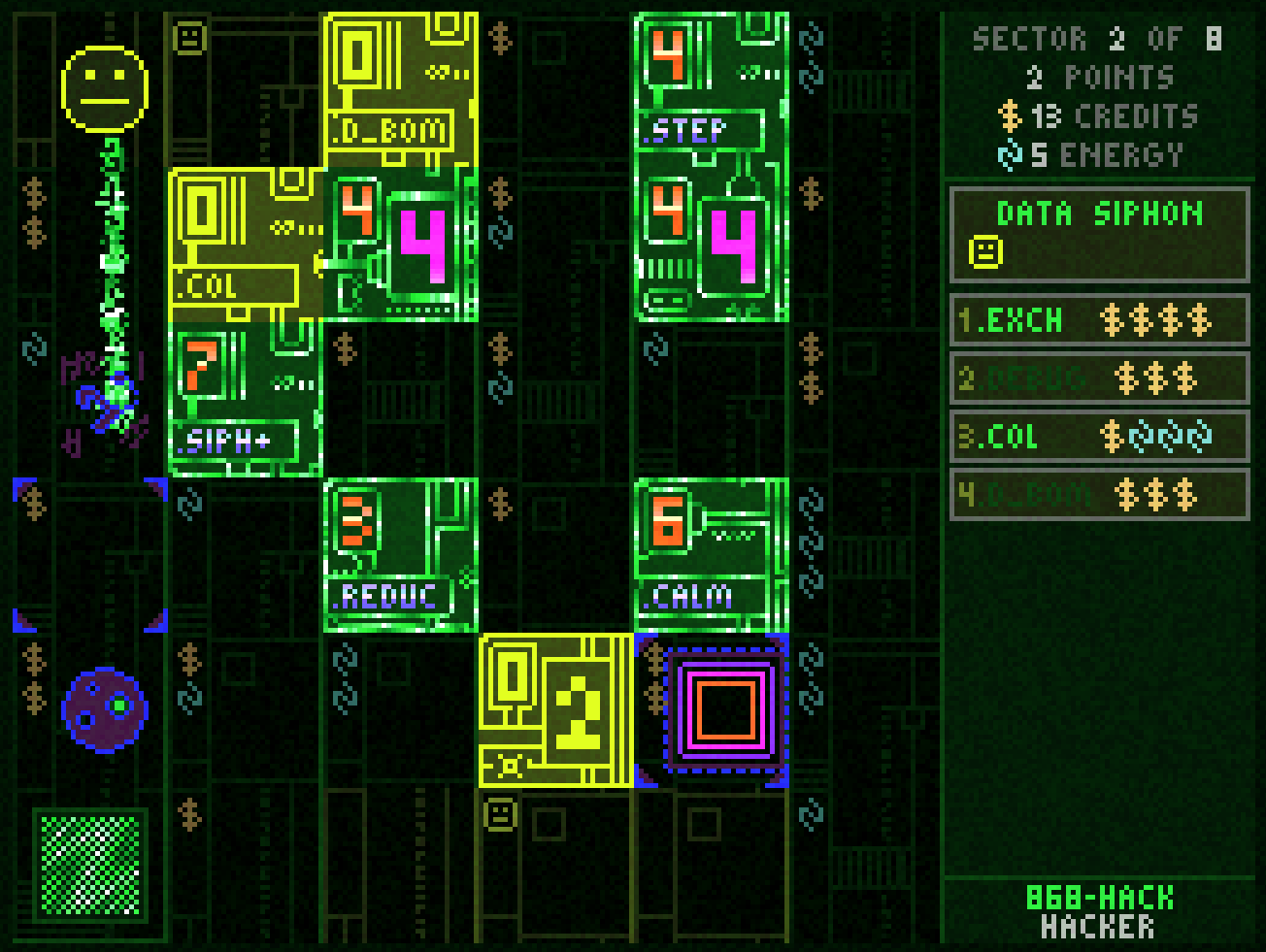 Where it gets interesting is, improbably, the walls. Each wall tile holds some kind of reward you can extract from it, but each also has a number showing how many enemies it will spawn when you do. Using a 'Siphon' extracts the rewards from all the walls you're touching, but also summons all the enemies their numbers warned you about. Can you take on that many? Well. That's 868-Hack's eternal question.

Siphoning a wall that gives you the Anti-Virus ability and only summons four enemies is a good deal. Anti-Virus is great - it hurts and stuns every Virus on screen, and the Viruses are the aforementioned enemy that moves twice as fast - one of the nastiest.

Trade-offs like that are interesting, but they're not what makes 868-Hack's difficulty system work. That happens when you encounter the other type of wall. Instead of reading "Anti-Virus - 4" these will say something like "7 - 7". Summons seven enemies, and gets you seven points. This is interesting because 7 points are no fucking help against the terrifying horde you've just summoned. You're not making a practical decision about whether a new ability and a big fight is a net win. You're just asking yourself: am I good enough to take on that big fight? And, to the nearest whole integer, how good do I think I am? You're betting on yourself. 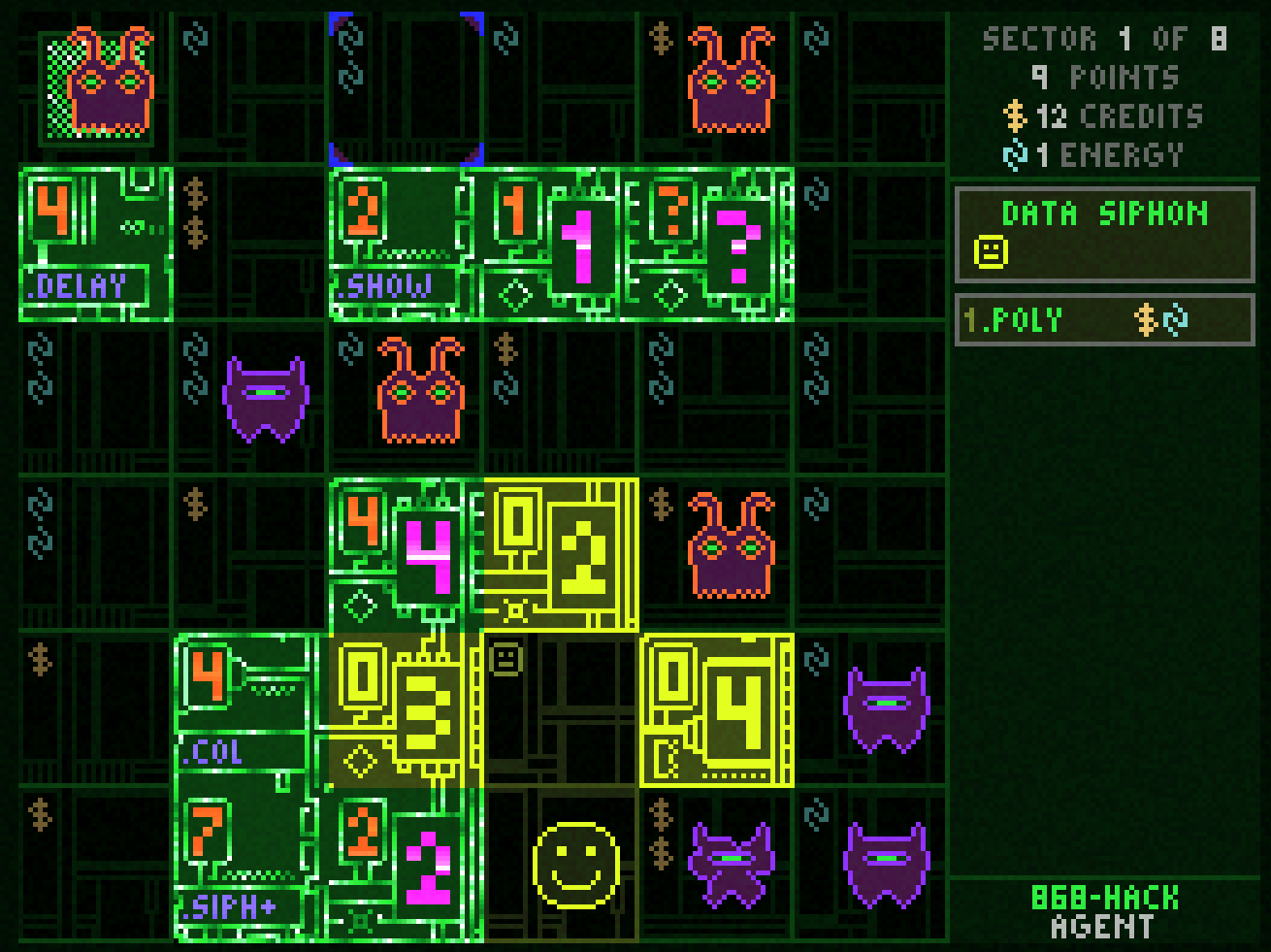 Points do nothing, but at the end of a run, points are everything. If you didn't risk grabbing any, don't expect a handout just for completing the game. 868-Hack is by Michael Brough, whose game design style is minimalist, absolutist, and clean. If there's a tile that exists to give you points, it only gives you points, and there are no free points for doing anything else. Everything has a function, and everything's function is singular and clear.

So once you're comfortable enough with the game that just getting to the end is not the holy grail, it's all about the points. The relationship is always one-to-one: an eight points tile summons eight enemies, a three summons three. Taking on about four enemies at once is pretty manageable, so it in theory doing that over and over would be a winning strategy. But your siphons are limited, so you're pushed to make the most of them. Since they tap all adjacent walls, where you stand when you siphon is critical. And the game's random levels naturally present spots that are very good value for money. But in 868-Hack, that's a double-edged sword: you can get 6 + 6 points with one siphon here, but are you ready for 6 + 6 enemies? Turns out I was not. 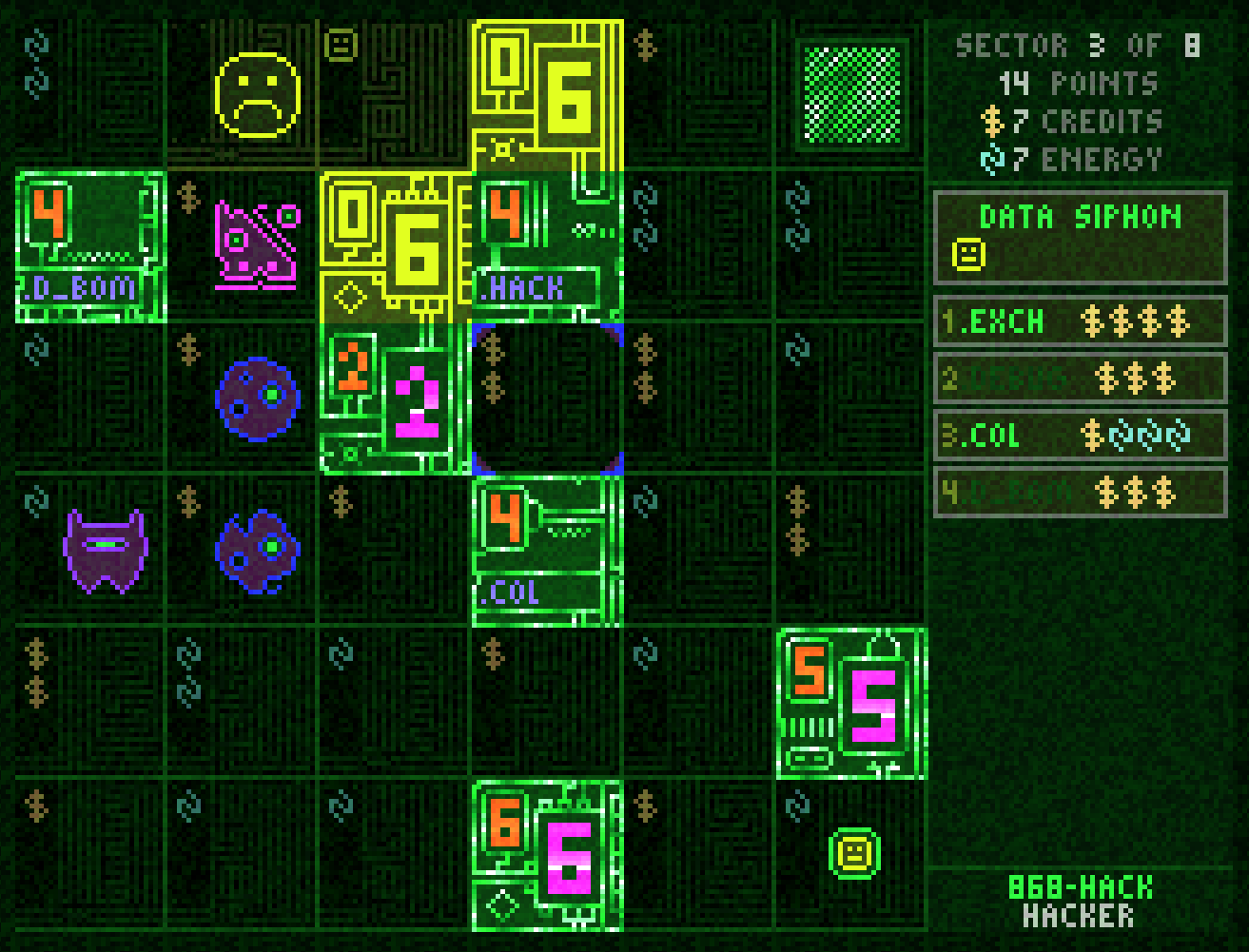 Letting the player bet on themselves elegantly caters to a whole complex spectrum of player skill, predeliction for challenge, random generation, and the ebb and flow of a given run. All of those things can vary independently, and traditional difficulty modes do a bad job of covering them. An easy mode might scale down the difficulty spikes enough for me to get past them, but make the standard experience boringly trivial. When you're constantly being asked how much extra challenge you think you can take on, you can give yourself some interesting problems if a run's going too smoothly, or the levels have been kind to you, or you just got a powerful new ability. And if you're struggling to survive, you can skip the points tiles and use your siphons on gaining new abilities or resources.

Crucially, this is not a snowballing mechanic. Snowballing is when doing well gets you a reward that helps you do even better. It's usually a bad loop for a game to get into, because the players who are finding the game too easy are given powers that make it even easier, and the players who are struggling to get anywhere are denied the tools they need to do any better. Points, as I say, are gloriously useless, so 868-Hack doesn't snowball in this way. The really potent abilities, like Anti-Virus, only cost you four extra enemies to deal with, which isn't hard. You can get all the abilities you need to be powerful without taking on too much extra challenge, it's only if you want a good score that you're tempted to make big, dumb bets on yourself.

There's another benefit, too: because you're the one who takes on extra challenge when it's needed, it feels like your fault if it goes wrong. That makes it much less frustrating than a designer-imposed difficulty spike: if Brough just made level six brutally hard, you could quite reasonably be annoyed when it ends your run. When it was you who decided to invite 16 extra enemies to level six, your death is your own damn fault, and you know an obvious way to avoid it next time.

Although completing the game doesn't get you any points, it does add a helpful twist to the points-grabbing game. Usually, the enemies you summon have to be dealt with - even if you can make it to the level exit without fighting them, they come with you to the next one. Except when there is no next one. On the final level, you don't necessarily have to deal with the consequences of your actions. If you can siphon some points and still get to the exit without dying, you're clear. It's easier said than done, of course, because by that stage in the game enemies are spawning every turn, and adding seven or 25 to that onslaught makes moving at all a problem. But you've also got a lot of abilities by that point, and you're not going to need the resources they consume after this, so it's fun to figure out extravagant ways to use them to pull off a smash-and-grab. My favourite is Delay: it leaves all newly spawned enemies as harmless eggs for a few turns. If you can afford to cast it a few times, you can cut a path through this field of unborn virus programs and bail through the portal before they hatch. 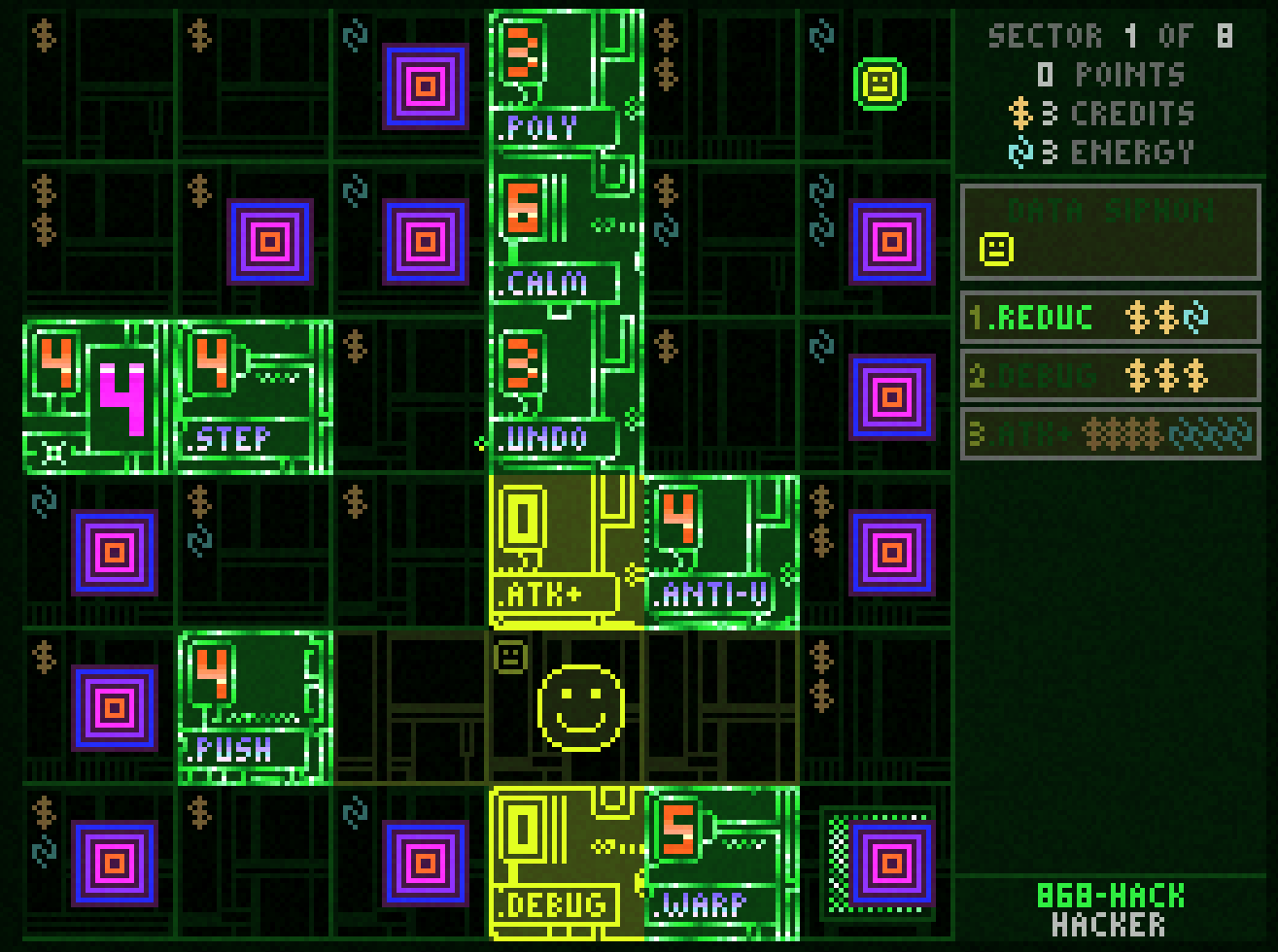 I want to see betting on yourself in more games. I'm already brainstorming how it could work in my own game Heat Signature - what if you had no upper limit on what you could buy in the shops, but the money you spent counted against your score at the end? Bet on yourself by buying nothing at all, trusting you can punch above your weight with your starting equipment. Or go on a wild shopping spree and have fun with your cool toys, but accept your garbage score as the price.

Clumsy difficulty settings exclude people. The rare game that, like 868-Hack, makes genuine progress towards solving this problem should be a touchstone for any designer who wants to make games better.