Where to find Bagley’s Corrupted Memories

To start this mission, head to the console in the middle of your safe house and talk to Bagley. Here, he’ll start going on about how he reckons he’s not really an AI and is actually a person. You’ve barely had the chance to process his second ‘death’ of the game, when he’s back to life and ordering you to wander about the gaff and take photos of London landmarks for him. How very lit.

You’ll be given a bunch of corrupted photographs accessible from the DedSec section of the ‘Data’ menu (the rightmost tab). Here, you can see all the corrupted memories Bagley has, mostly of iconic London landmarks instantly recognisable to locals. That’s what I’m here for though! Non-Londoners rejoice, as I’ve trapesed around the place and pinpointed all the Bagley corrupted memory locations.

Bagley’s first memory shows a big ol’ building with stately columns and a dome. Those of us familiar with London’s landmarks know it as The National Gallery. You’ll find this by going to the Trafalgar Square station, a bit North of your hideout. The Gallery will be easily visible upon turning right after exiting the station. Look behind the giant statue and protestors.

Walk close enough to it so you get a notice on your screen saying ‘Memory Nearby. Use the camera app to complete the image and restore Bagley’s memory’. Get the camera out and take a picture of the landmark to complete Bagley’s first memory. Just be careful not to accidentally back into the Albion red zones when trying to snap the perfect picture like I did! 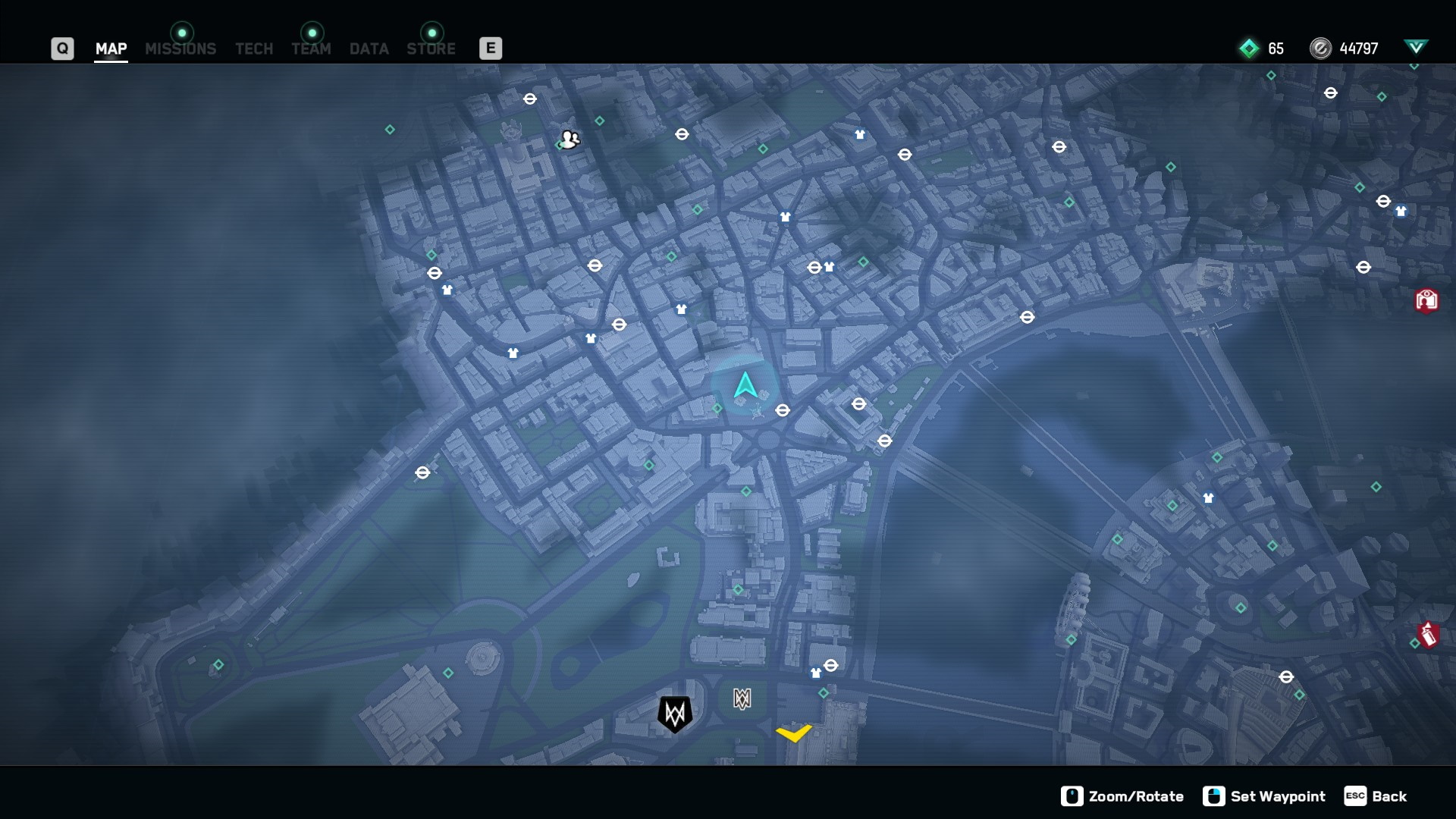 The second Bagley memory is an extremely obvious one. It’s the London Eye, AKA the Millennium Wheel. You can reach it via Waterloo station - exit and turn left twice towards the river bank. Run along for a while and stand near the big anchor point for the London Eye, where you should get the notification for Bagley’s memory.

Take the photograph and you’ll get a fun, whimsical little recording of Bagley’s dad confessing to having an affair and leaving his family. How fun, the London Eye is definitely the place for this kind of conversation. 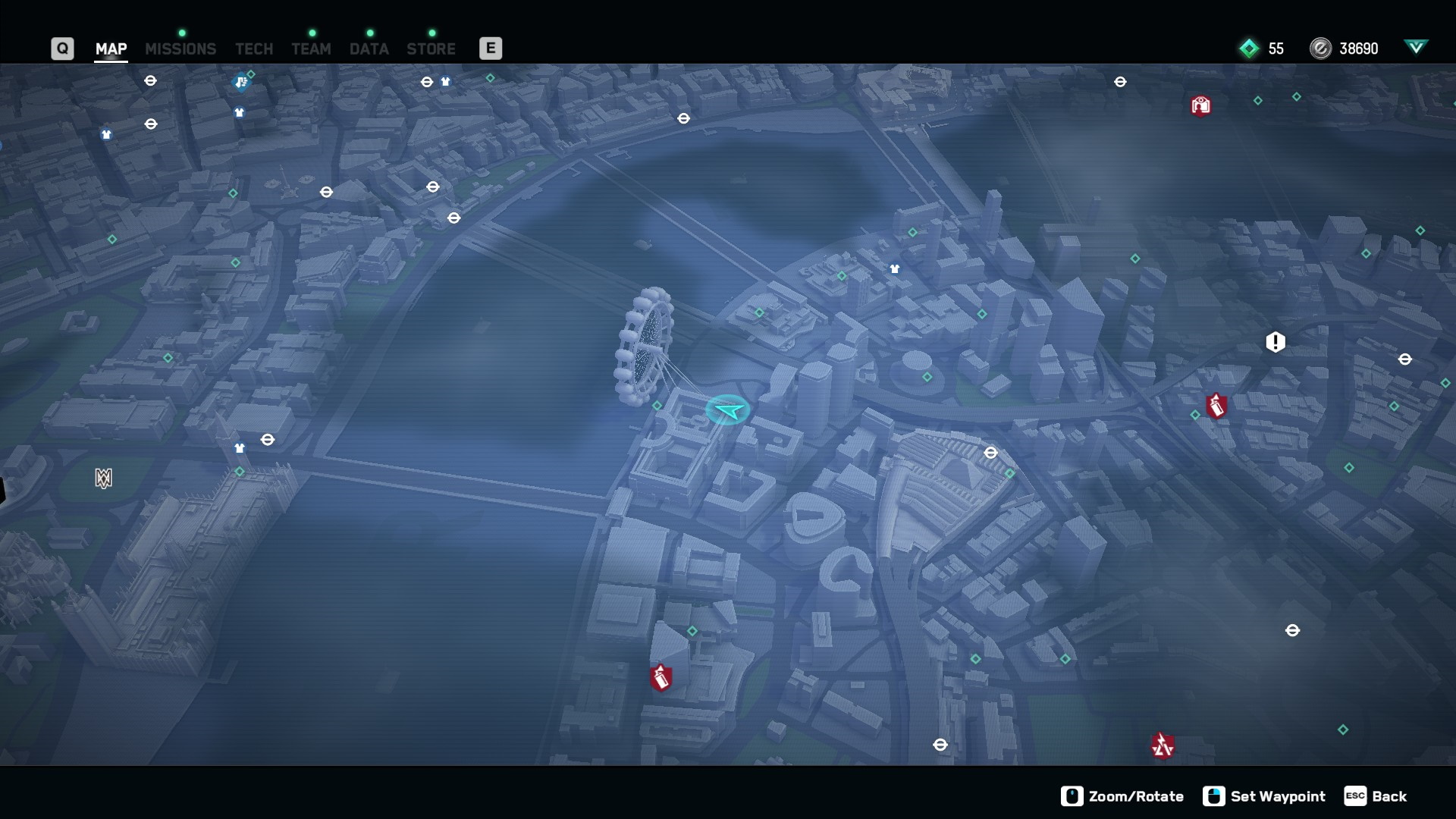 The next Bagley memory is the World of Tomorrow. Head to Old Street station in Islington & Hackney, exit the station, and turn right to go down the road to the South East. The World of Tomorrow is a Clan Kelley red zone, so you’ll be able to find it easily on your map.

Don’t worry though! You don’t actually have to go into the red zone. I stood behind the bar where the ‘get pissed’ icon is and took a snap of the stairs surrounded by the brightly-coloured bloomy arch. Do this to hear Bagley down the boozer celebrating his rowing achievements with his mates. 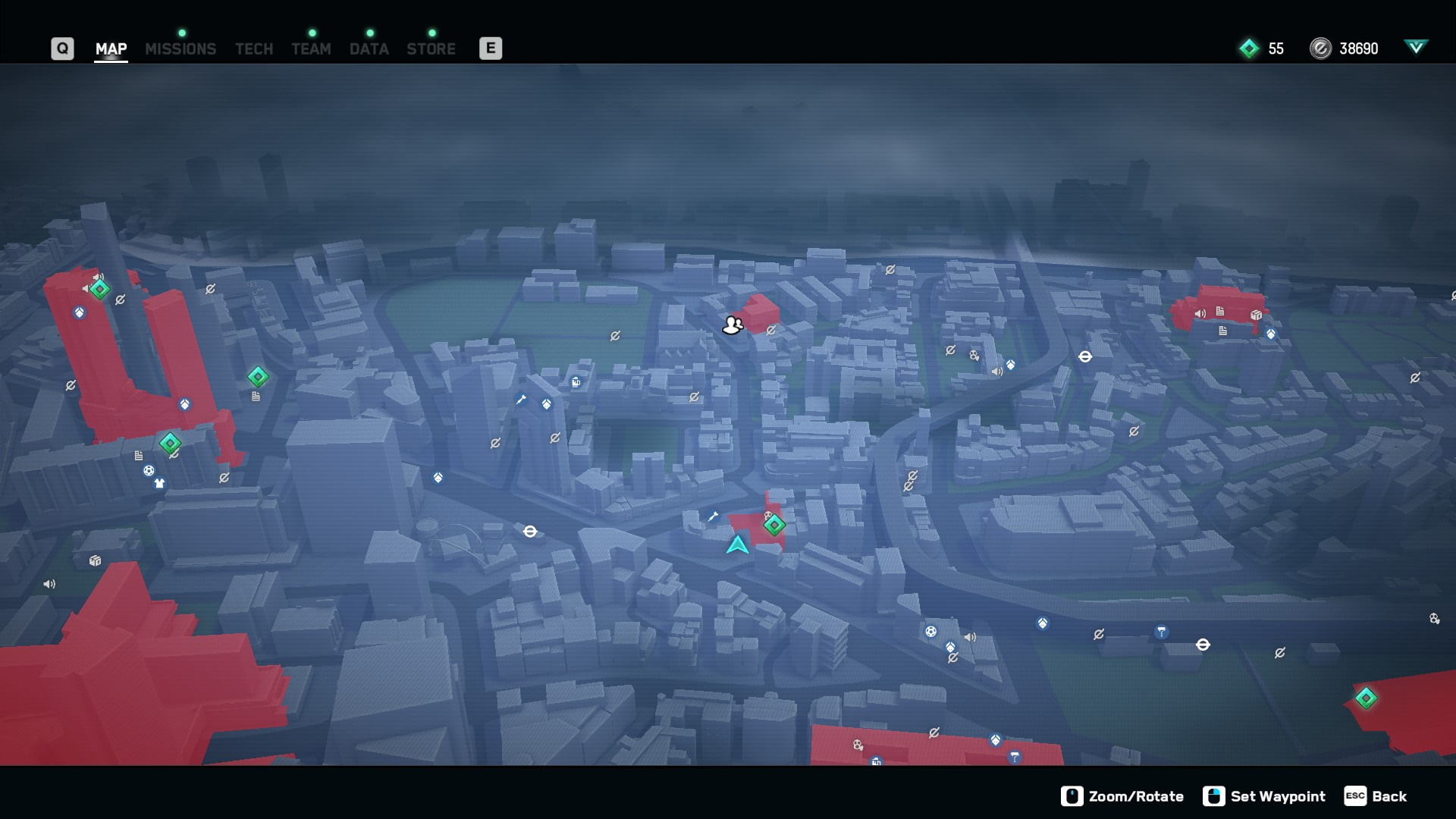 For the fourth memory, pop over to Lambeth. The Kennington station was the closest one I could get to, and from there head South. You can also get there from Walworth Road. The streets below Kennington Park, the Clan Kelley red zone, host the Brixton Recreation Centre. Stand on the street just next to the cool looking open-air pub and snap the picture looking at the giant outline of the footballer.

This one is another rough one, as Bagley has a seizure whilst trying to use the rowing machine. Machine Bagley comments in his classic AI emotionless manner, as you go off and search for his next memory. 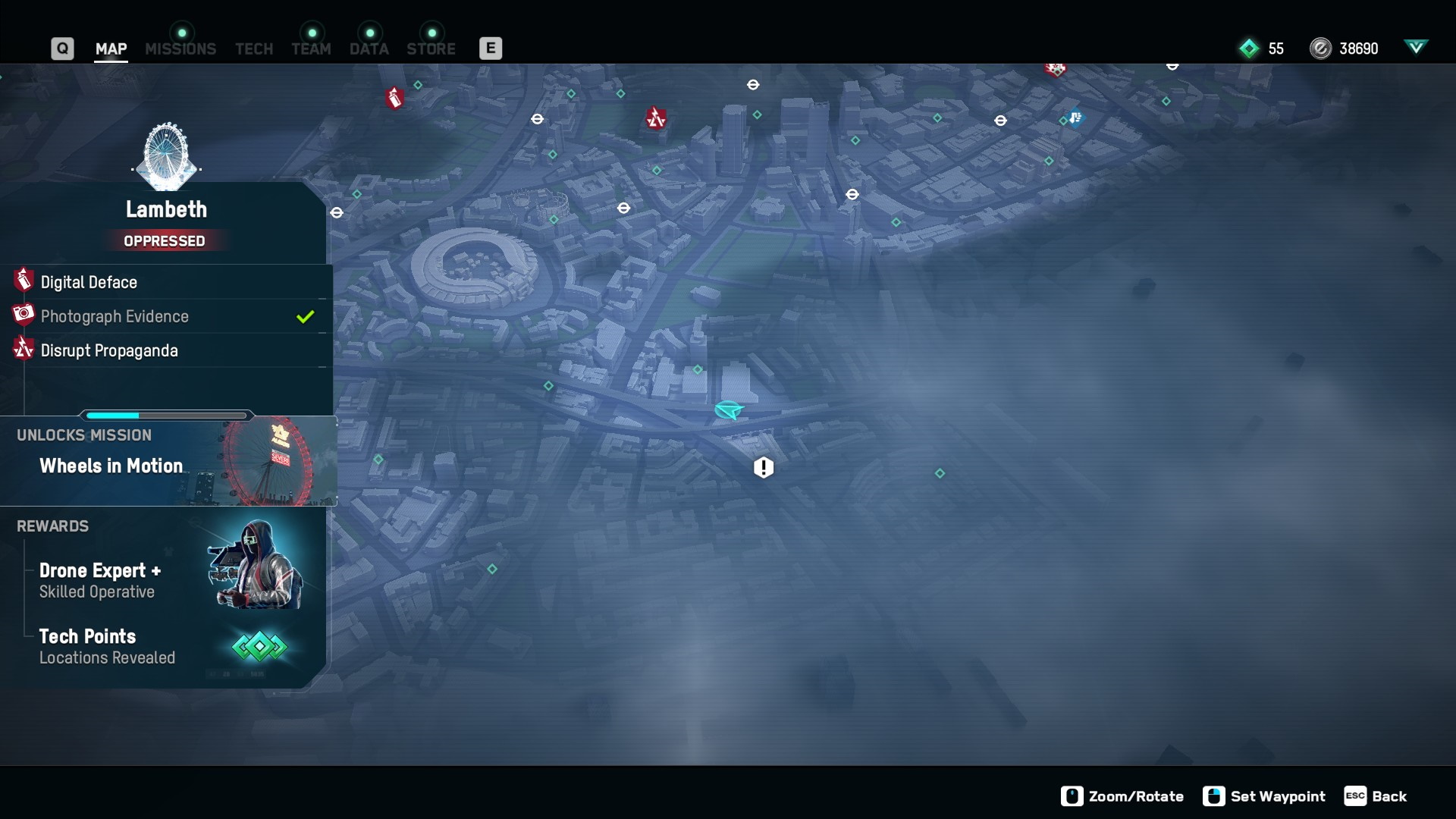 This one is tricky, but once you know where it is you’re all good. Fast travel to the Viaduct tube station in Camden and the memory will be flagged up immediately. From there, exit the station, turn right, and enter the Crosier & Cherry Tree pub. It’s just down the alley and to the right again.

It looks like a lovely pub, so it’s no wonder Bagley frequented it in his human days. Make sure you back into the corner to activate the memory. Bagley sits there, eats his pork sandwich and shortcake, and downs a pint. What a treat. 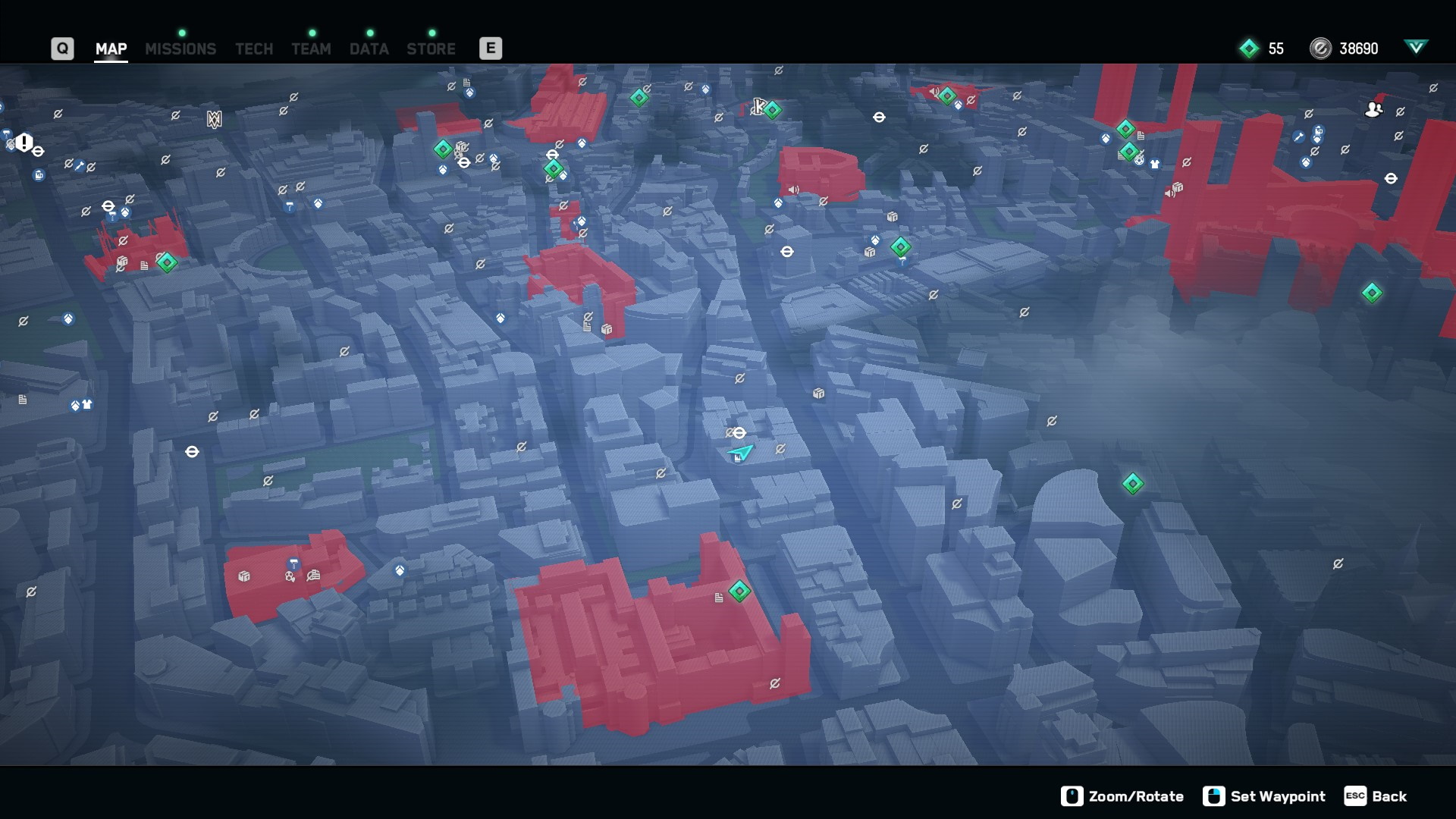 Near the DedSec safehouse in Westminster, you’ll find the Duck Island Cottage. Exit the Earl’s Fortune pub and head to the park just north of it. You could also fast travel to Westminster tube station and head West. Drop into the park and head towards the larger island in the centre with the Kick-Up icon on it.

Take a snap of the gazebo thingy to unlock Bagley’s next memory. Seems he’s back rowing and recovering from his seizures! Also seems he’s not really called Bagley, that’s a silly nickname he’s had for a while. Arthur seems to mean a lot to him, and Bagley wants him to be a part of his future. How romantic (it’s only explicitly described as romantic in the data’s description, and is somewhat ambiguous in the audio file, but yes, Bagley begins a romantic relationship with Arthur in this area of his memory). 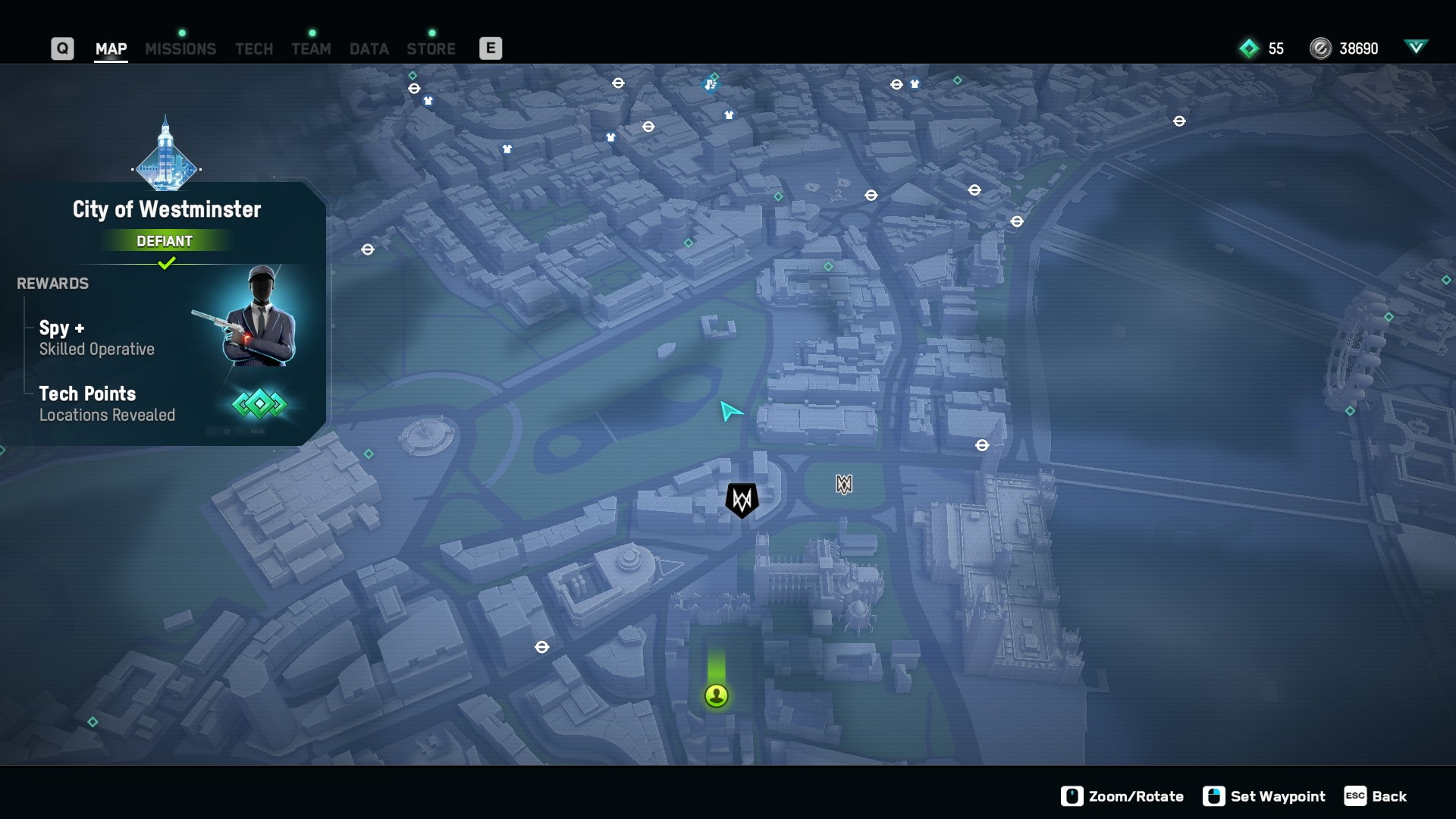 Back to London landmarks, the Wellington Arch is Bagley’s seventh memory. Head to Green Park station in the West side of Westminster and wander South-West towards the corner. Stand on the side of it near the Kick-Up ball and snap the picture.

Bagley appears to be in a tricky situation, struggling with a violent outburst as police call an ambulance. Seems Skye Larsen might’ve had something to do with Bagley’s story. We’ll find out soon enough. 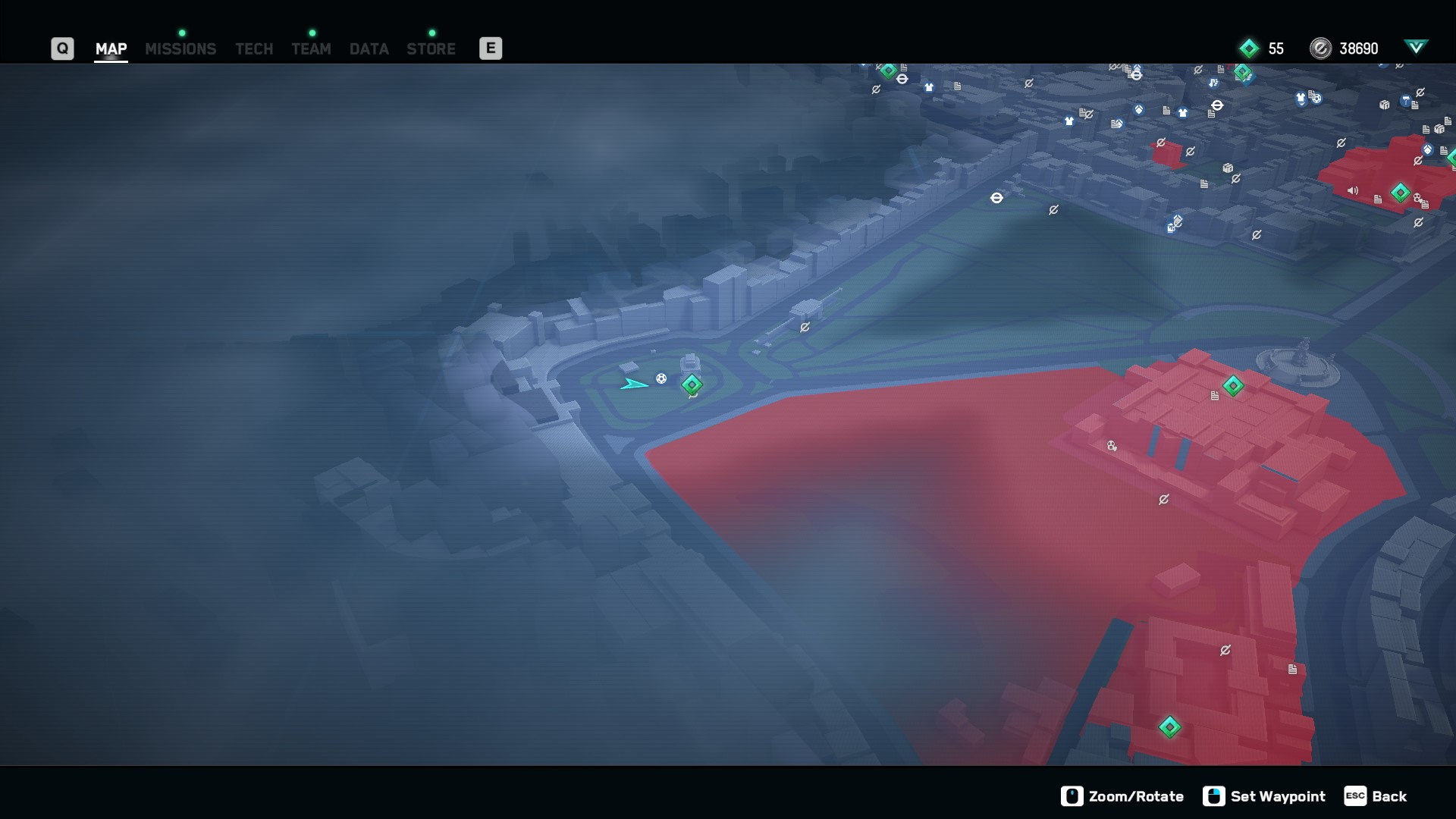 Guy’s Hospital can be found in the shadow of The Shard. Head to London Bridge station in Southwark, go South of King’s College, and take a picture of the hospital from near the entrance.

Turns out Bagley has early-onset dementia, and his sister, in a rather foreboding and sinister way, claims no brother of hers will ‘waste away in a hospital’. This’ll unlock the final Bagley memory. 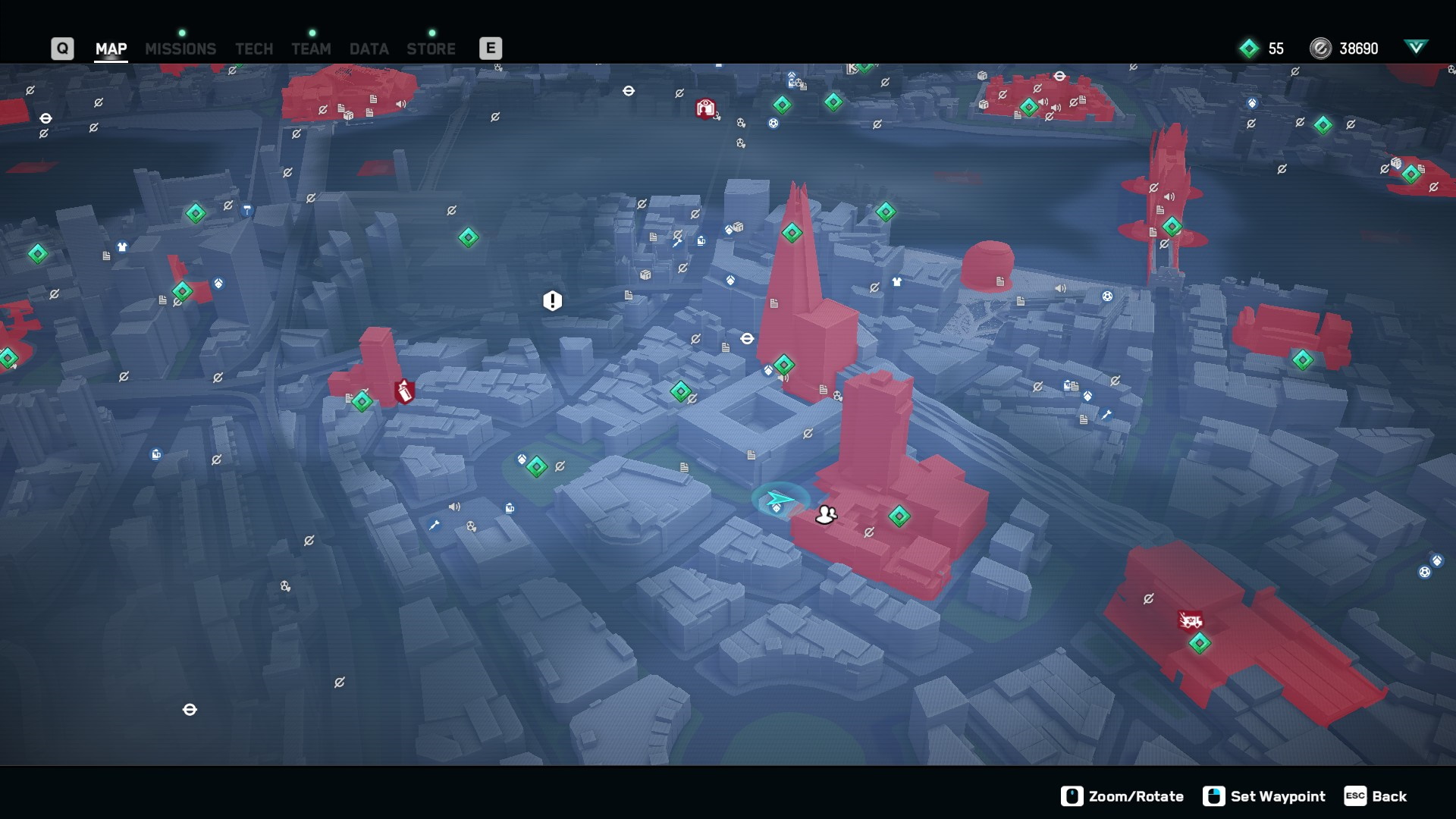 The final memory is a beautiful London skyline, and won’t be labelled ‘9’ in the list. Mine came up as 4.5, but other players have reported different labellings. This memory is of the Sky Garden. To get here, head to Cannon Street or Bank station in the City of London, and head East to the Walkie Talkie building. You visited it on a previous story mission, so it should be familiar. Get the elevator up to the roof, walk directly forward, and get your camera out on the beautiful London skyline (the weather wasn’t great when I did it but oh well).

This final piece of the puzzle says it all. His real name is Bradley. For real though, turns out Bagley is actually Bradley Larsen, brother of Skye Larsen, neural-mapped to the cloud in the year 2040. You can then go meet the real Bradley Larsen in St. Pancras Hotel. All you need to do is follow the marker near St. Pancras station in North-East Camden and you’re there. 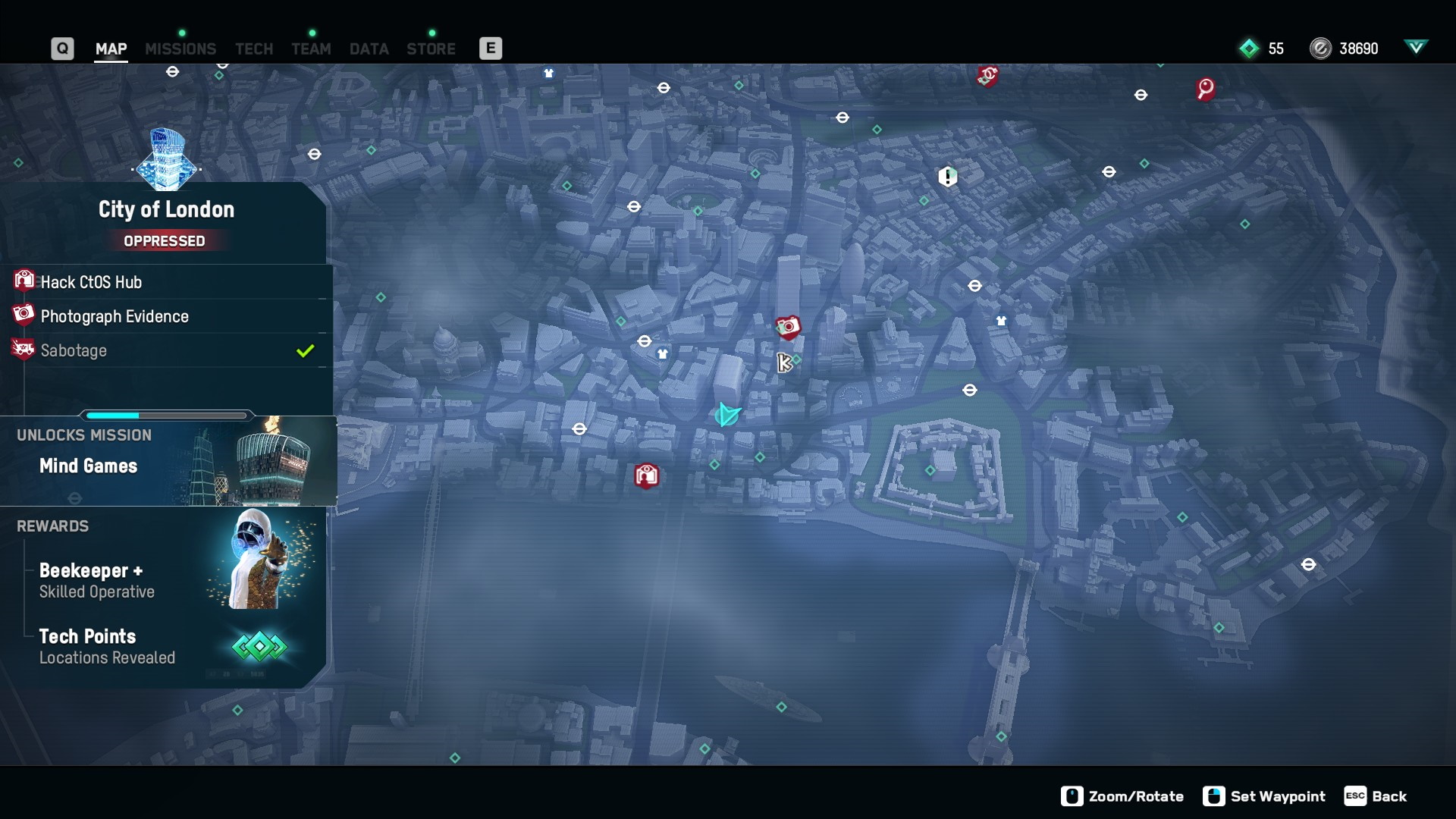 The little voice notes you hear from Bagley are interesting tidbits from his life, and he’ll comment on them each time. It’s pretty fun to go back through his life story, and you can re-listen to all of the recordings in the DedSec Data menu.

Now you’ve done all that though, you might fancy locating all the masks in Watch Dogs: Legion - you seem like a completionist to me. If that doesn’t float your boat though, we have all kinds of other guides, including what we know about Watch Dogs: Legion’s online multiplayer.