Why are people still playing APB Reloaded? I left that question unspoken when I wrote about Little Orbit picking up the cops and robbers MMO a couple of weeks ago, but you can bet I was thinking it. I bet that most everyone who read that post was too, and I bet you're thinking it right now.

Then I remembered I was a games journalist, and that I should just go in and ask.

The first notable thing that happens when I launch APB is that it plops an advert into my browser like an unwanted, unexpected turd. The second thing happens when I press the random button on the character customisation screen, and instantly see a cop who resembles a slightly less beardy Bob Ross. 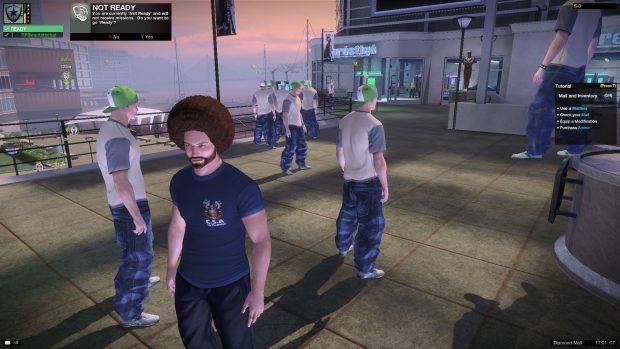 So far, that's one hit and a miss.

I'm playing in the middle of the day, but there are still eight or so full servers, each with 80 people in them. I wait for a spot to open up in one of then, jump in and send a message through the district chat asking for people to interview. When I get no reply, I decide I better get on with stopping some crimes.

When you tell the game you're ready for it, APB assigns you a team of four and a random mission in a near-ish area. That might involve hacking something or capturing a control point, for reasons that are attached to crime committing or preventing that I didn't care enough about to read the particulars of. You're pitted against another random team, and the capers I got involved were all wrapped up in fifteen minutes or less.

While scooting over to my first mission, I'm struck by just how dated everything seems. The UI is clumsy and confusing, the graphics are painfully noughties, and the car I've just hijacked feels like it's floating. The question that made me boot up the game and subject myself to all this perplexes me more than ever.

Then I actually have some fun. The mission is in full swing by the time I arrive - I think we're supposed to stop some robbers from pulling off a jewellery heist - and arriving late lets me get the drop on them. I sweep in from an unexpected angle, and drop two criminals before they can notice me. They respawn, and as the fight goes on I'm subjected to a seemingly endless barrage of rockets and grenades. We lose. 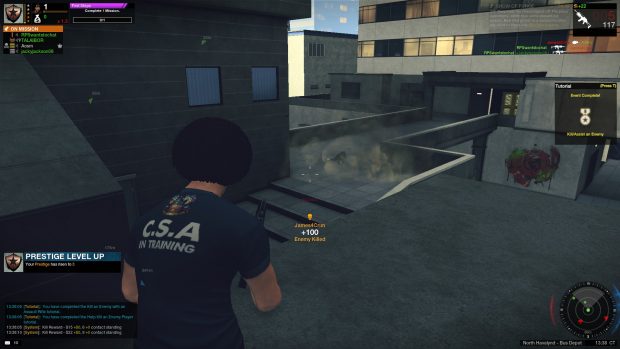 I leave and join a "chat and trade" server where I hope potential interview subjects might be more forthcoming, and they are. Someone named Morphological responds to my call, and tells me they've been playing since the open beta started, back in 2011. I'm keen to get down to brass tacks, and ask why he's stuck with the game for so long. "I just like the gunplay. It feels nice, and I’m decent at the game. Right now, I just play it every now and then to stroke my ego. For me, APB is the kind of game where you can blast some tasty jams and just lean back in your chair, get comfy."

The gunplay, for the record, is crap. Compared to games like Battlefield or Destiny, the weapons I tried in APB felt piddly and underwhelming. A large part of that is down to the way character models don't really react when you riddle them with bullets: they just stand there, unflinching, then fall over.

I ask how Morph how he feels about the new dev team. "I'm cautiously optimistic about Little Orbit. I mean, they can’t be worse than Gamers First were". It's a sentiment he's quick to expand on by telling me that he really doesn't think this is the time for new players to get into the game. "The game basically is garbage right now. And playing it right now requires actual history with it, because as it is now it’s literally filled with cheaters. And the game doesn’t really ‘embrace’ new people, it more or less shits on them." I ask what he means by that last point, and he says it's due to "little to no fair matchmaking".

I'd assumed I'd suffered that rain of rockets at the hands of someone who'd bought an unfairly large stockpile of explosives, though Morphological's comments make me wonder if I was facing a hacker. I don't have time to dwell on it for long before someone else pops up.

Yiera's been playing the game for four years, though he initially struggles to put his finger on exactly why. "Well dunno tbh...there’s something about it that keeps me playing. Probably because it’s unique in its own way...PVP is unique from other games." I know where he's coming from - I definitely saw the appeal of being thrown into dynamically generated missions. The combat still seems far from good enough to be habit forming though, which is why Yiera starts to make a bit more sense to me when he says "I especially like the customisation this game gives you." It's the reason he finally arrives at that resonates with me, though: "mostly I keep playing because I hope to see some of my old buddies pop on and hopefully have a nice chat with me." 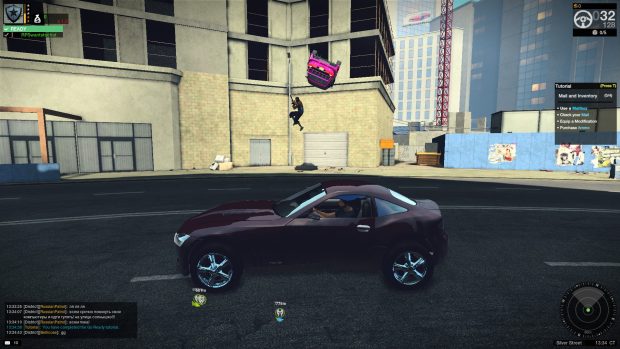 I'd asked Morophological if he'd played GTA Online and had any thoughts about how it compared, though he just told me he wasn't interested in it and that he wasn't aware anyone really cared about it. Yiera has a more considered response: "I think GTA has a lot more to it than APB ever has had due to the lack of effort from G1. Such as events and racing. But I’ve always preferred APB more due to the combat and the fun I have playing it."

If I'd thought about it properly beforehand, I guess I wouldn't have been surprised that the people who've been playing APB for years would be quick to dismiss GTA's combat. I've only played it a little and can't properly recall how I felt about the gunplay, which is the best evidence I can offer for it not being memorably good or bad. Not that my interviewees would agree.

The next person I chat to goes by Hyperoni, and he's a big fan of emphatic short statements - "GTA online is just no fun really, too many hackers and loading screens. And ofc the aimbot. GTA isn’t competitive." How long's he been playing? "2 years." Why? "The customisation system and fight clubs!" How does he feel about Little Orbit? "I’m really hyped about the new devs, yes. I expect a big change." What big change in particular? "I really just want new content and a new competitive system". 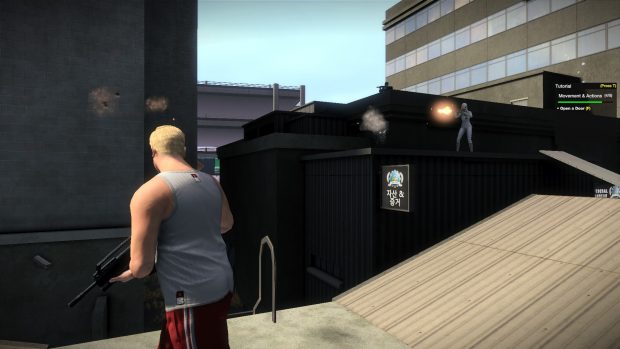 The last person to get in touch is a little more... verbose. Szambi tells me he's been playing the game for around four to five years, and regards uniqueness as its key strength. "It’s addicting. Once you get into it there's no escape. You might take a few breaks but you’ll always come back. APB is like a unicorn, y’know? Maybe it isn’t sparkly n’ stuff, but it’s still a unicorn. It’s special and unique." I press him for specifics, and ask what he spends most of his time in the game doing. "Missions. New people may find them repetitive but it’s not true, you will face many enemies with different weapons, different strategies. Also the creator. You can do ANYTHING with it."

His opinions on GTA come as no surprise: "Character movement in GTA 5 and Online feels clunky, it’s not as precise. Combat is a bit chaotic. You can’t really personalise your stuff that much. APB has more of an e-sports like feel to it. But it also has its open world."

When I ask for his thoughts on Little Orbit, he's more reserved than the others. "All I want is the game to stick to its art-style and general feel. And I can’t really say anything about them yet, they haven’t done anything. Although I look forward to seeing some improvements here and there. "They need to prove themselves worthy of acquiring a game such as APB. It’s an unpolished diamond."

It's really not. Now that I've seen the game for myself though, I think I can see why the servers are still up and running. I'd vaguely assumed APB must have croaked a few years ago, given that I'd never heard a positive word about it aside from when people mentioned its customisation tools. I played for a couple of hours after I was done interviewing, and didn't touch those myself - I never have more than a passing interest in changing my appearance when I play games, no matter how fancy the tools to do so are. 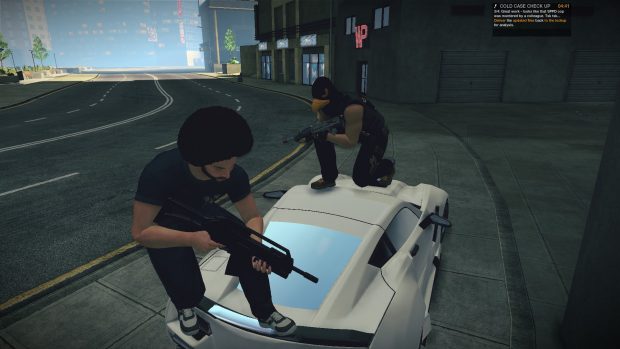 It's no diamond: the driving and shooting still feels too shonky at its core for a game that's almost solely about driving and shooting. It's more like a uniquely shaped chunk of Topaz, which I found fun to take a brief look at. I'll never fully understand why someone might want to gaze at it for years, when there are so many actual gems on the market.