Overwatch has just finished its most recent Anniversary event, marking four years since the game launched. It's been a good four years and, to celebrate, some of the developers have written a cute little post detailing some of their favourite moments working on Overwatch. Now, you may be interested in the stories about early character design, or perhaps the one about the whole dev team singing the Pokémon theme tune at a karaoke night. But I personally cannot get this image of a stick figure Tracer out of my head.

Here it is in its full glory: 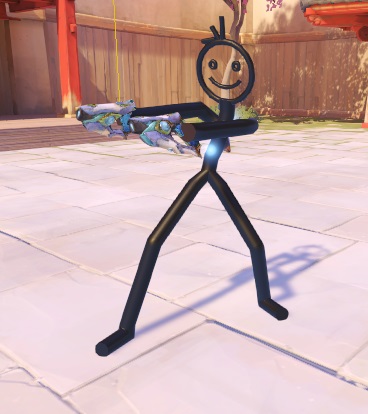 "Someone on the internet was confused about what a character designer was," explains lead character technical artist, Dylan Jones. "They thought that lead hero designer Geoff Goodman drew up the concepts for all the heroes. Goodman, who found that thought hilarious, replied to the email with a joke stick figure Tracer. To keep the joke going, I made a skin out of Goodman’s brilliant concept."

I know this is meant as a "haha stick-Tracer funny" thing but I actually love it. Look at the little hair tufts! I also adore that her guns are so incredibly detailed compared to the rest of her body. Just imagine that thing zooming back and forth in front of you, launching a pulse bomb in your general direction with those dead eyes and that big, unsettling smile.

While this image of Tracer is certainly the most amusing to come out of the anniversary post, there are a few other good stories that are definitely worth the read. There's a good one about the dev team swinging around an Xbox controller to see if the animation they'd created for Brigitte's flail was accurate, as well as short video of an early development Hanzo doing some sick parkour.

I definitely recommend giving it a read if you're into the game. It's strange, doing a memory post like that has this weird sense of finality to it; the devs recalling these old stories almost seems like a farewell. I'm probably reading into it too much, but maybe Overwatch 2 is looming closer than we think.