If you click on a link and make a purchase we may receive a small commission. Read our editorial policy.
Wildfire review
A 2D stealth game in which you can wield elemental powers of fire, water and earth, Wildfire is ultimately less than the sum of its many parts.

Stealth games tend to come in two flavours. Nowadays most are systemic playgrounds, in which players are presented with a range of options for how to deal with any given situation, and errors are forgiven after the few seconds it takes a guard to decide it was probably rats. A handful of others are more rigid, with only one correct way to play, and each stumble from the shadows punished by death and loading screens.

I like both of these kinds of stealth games, though I prefer the former. My frustrations with Wildfire can largely be traced to not knowing which kind of stealth game it's going to be in any given moment.

In Wildfire's opening moments, your village is razed, its residents are taken captive, and you are burned at the stake as a suspected witch. To your own surprise, you emerge alive and with the power to draw fire into your hands from any source in the level around you, and to cast it out again as a fireball. The rest of the game is spent sneaking around 2D levels, avoiding guards and optionally rescuing the villagers.

At its most basic, your sneaking is accomplished by avoiding the eyeline of enemies. You can leap across chasms, scale vines to reach higher ground, drop down to hang beneath bridges, and hunker in tall grass. Guards don't have visible vision cones as they do in Mark Of The Ninja however, and whether they see you and how fast they move through alert states is hard to judge and feels inconsistent. Guards also patrol slowly and can hear you if you jump or run on stone surfaces, meaning that sometimes the optimal solution is just to wait a long time and move very slowly. 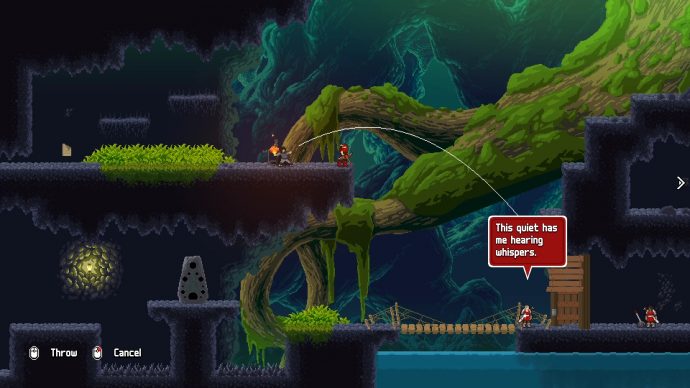 Thankfully optimal is in many ways optional. Most levels only really require you to reach an exit, while objectives like rescuing villagers, remaining undetected and leaving guards alive give you bonus points should you decide to accomplish them. This feels like permission to not sweat the details too much if you don't want to - which is important considering the game is called "Wildfire".

Fire spreads, you see. You might think to throw it at a wooden bridge in order to shorten a pesky guard's partrol route, but then the fire also consumes a nearby vine, and then some nearby grass, and then it ignites some exploding barrels, causing a chain reaction that continues the spread across the level. The path the fire will take is mostly predictable, but more troubling is that in many instances using fire hurts more than it helps. Burning grass leaves you with fewer places to hide, for example.

Seeing their world in flames also causes guards to panic, during which their behaviour is unpredictable. Panic is good because it allows you to move past the guard unseen, if you're quick, but it'll also sometimes drive guards to hurl themselves off cliffs unnecessarily. Sometimes they'll survive the fall and end up in a new position that makes your progress more difficult, and sometimes they'll die, causing you to fail the optional objective of keeping them alive. Neither feels like a good trade-off.

I rarely had moments where I was able to observe a situation, conceive of a plan on how to progress, and then enact that plan in a satisfying way. The consequences of my actions tended to play out in ways I didn't expect and couldn't react to, and consequently my successes felt half as rewarding and my failures twice as frustrating.

Given these feelings, I wanted to lean harder into either of the two types of stealth game I mentioned at the start. I want to say, OK, fire is too destructive, and commit to a pure stealth run no matter how long I need to wait for guards to slowly plod past. But the game doesn't support this: fire is a necessity to destroy occasional barricades that block your path to the exit, and to free the villagers whose rescue would make perfection satisfying. Often getting fire to where you ultimately need it requires you to set other fires along the way, too, as you navigate around pools of water which would extinguish your hands.

So instead I'd want to say, OK, maybe I'm simply not good enough at this game to do a proper stealth run, and so I will commit to fudging my way through it with elemental chaos. But it doesn't feel as if the game supports this, either.

Your fire abilities expand as you spend upgrade points, and are eventually joined by water and earth powers unlocked by reaching new parts of the game world. The oppportunities afforded by these abilities are an expansion in quantity more than type, however. Early on, you'll gain access to a fire ability that allows you to rocket jump to higher areas, for example. Then early in the water upgrade path, you'll gain access to an ability that lets you reach higher areas by floating upwards in a bubble. Sometimes a spot on a level will present you with a pool of water and no flame, and so the water ability is certainly useful, but the difference is arbitrary, and in both situations you're still simply heading upwards.

You do eventually gain abilities that allow you to more directly subdue enemies: vines or ice to fix them in place, smoke to blind them, and so on. You're always at the whims of the level design as to how much of any resource is available to you however, and I found that this more directly confrontational playstyle would quickly lead me to situations I couldn't survive. This is because alerted guards can't be jumped over, and your own abilities are always reliant on hiding within or drawing resources from the environment. If you have an enemy on either side of you, or even just one close to you, it's the level design which determines whether there's anything you can do, and frequently the answer is no.

Wildfire seemed to incentivise a playstyle one moment and punish it in the next. Combined with the lack of vision cones or previews of how far a sound would travel, so many actions turned out to be a mistake in one situation and not in another. If it was a mistake, there'd be little chance to recover and I'd be battered to death with a sword or chomped to bits by teeth no matter how much health I had, and forced to reload a save.

There are no manual saves, by the way. There are checkpoints, which were often longer ago than I wanted to go back, and there are auto-saves, which often happened right in the middle of the chaos that led to my death.

The final nail in the coffin was the number of bugs I encountered in the five hours I played. These started with coffins, fittingly, which you can open and hide inside. They got trapped in an endless loop of opening and closing such that I couldn't use them without getting trapped permanently inside. There was also a mission event which didn't trigger, leaving a fuse unlit and me without a time limit. There was the time fire from one life continued into the next even after a complete level restart, solving a mission for me without my having to move. There were guards whose patrol routes became frozen, leaving me with no options to avoid being spotted. There was one crash.

Wildfire is polished in so many areas. Its pixel art is neat and communicative, its UI sounds tick and tinkle in rewarding ways, and there's no shortage of stuff. Tilesets change as you move across the world, new enemies are introduced, missions have one-off objectives or twists. I liked the handful of levels during which you could hide in snow drifts, or carry a flame in your hand to cause snow to collapse like an avalanche atop guards.

It's the underlying systems which let everything else down, and which felt incoherent to me. Some games only become fun once you work out what they expect from you, and I spent most of my time with Wildfire wondering if I was playing it wrong. Maybe I was, but if there was a fun way to play it, I never found it.