Looking to upgrade your Witcher 3 combat skills? Combat in The Witcher 3: Wild Hunt is a beast of two natures. At its best, it is elegant and satisfying, and rewards careful preparation. At its worst, it's like banging your head against a wall. Good thing we've compiled the below The Witcher 3 combat tips then, to help you achieve the former and steer clear of the latter!

The Witcher 3 has an impressively versatile combat system. It allows you to dive right in, swinging and blocking with instinct and abandon, but forces you to transition later on into a mindset of deliberation and grace - or suffer the consequences.

I've tried to boil down our Witcher 3 combat tips into a handful of understandable and practical elements, so by the end you'll hopefully have a much fuller knowledge of how to defeat almost any foe you come across in your travels across the Continent.

Okay, first off: I want you to raise your hand if you don't know what every single element of the combat HUD in The Witcher 3 means.

That's what I thought.

Don't worry, it took me a while to figure out and internalise all these different elements too. Just spend as much time as you need studying the helpful diagram above, and once we're ready, let's just move on. Cool? Cool.

One of the most painful combat sins I see newer Witcher 3 players commit is the sin of not taking good care of your weapons. Armor too, now I think about it. You owe it to grizzled ol' Geralt to supply him with the very best tools you can find for carving up your foes.

That means doing two things. First: loot carefully, periodically carry out some inventory management, and make sure Geralt is equipped with the very best swords and armor available. Second: repair your goddamn equipment. Repair Kits are not hard to come by, but even if you're fresh out, just head to the nearest blacksmith's and get all those percentages up to 100. Please, I'm begging you. 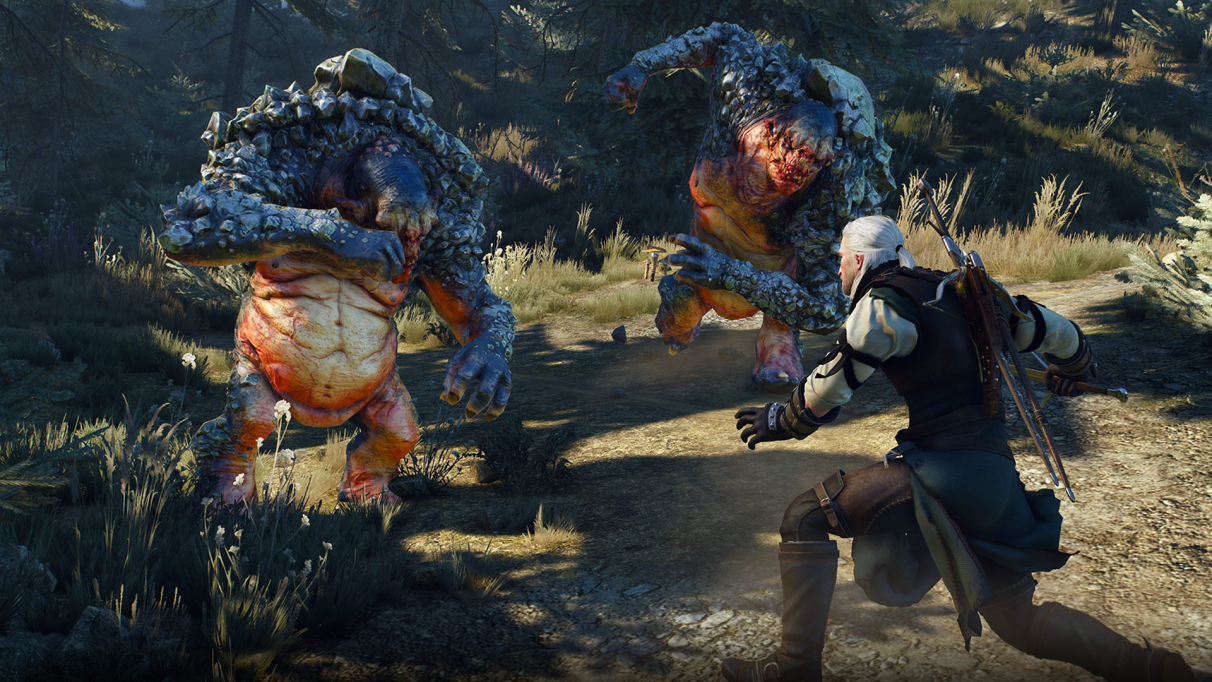 Now let's get into the combat itself, and what better place to start than the methods of avoiding damage? Let's go over them one by one:

Okay: so you know when to dodge, roll, and counterattack. Trouble is, you're still getting your ass handed to you. The solution? Prepare carefully.

Of these, I'd say the first element to look at if you want to defeat an enemy that's been giving you trouble is the oils. Coating your blade with the right oil will shorten a fight significantly with a lovely damage boost per hit. But it depends on the issue. Decoctions can give you some amazing powers and enhancements for a time, which can often turn the tides of even the deadliest battle.

The other thing worth bearing mind is this: if you're doing a quest that involves taking on a certain challenging enemy, chances are the level designers have placed the herbs you need not at all far from the location of the fight. Where there's werewolves, there's wolfsbane.

If you've completed the prologue, you'll probably already be used to the idea of shooting flying things like Griffins out of the sky with your little pew-pew crossbow. The real revelation here is this: there's a huge damage multiplier if you use the crossbow against underwater enemies such as Drowners (or they have reduced health when underwater - either way, it amounts to the same thing).

For so long I just avoided underwater Drowners as I didn't know how to deal with them. I wish I'd had the wherewithal to use my crossbow. Unless you're incredibly underlevelled relative to your enemies, you'll kill a Drowner in a single shot.

So, the first thing you should upgrade when it comes to choosing talents should always be Muscle Memory. Not only will you be hitting for +25% damage by the time you've hit level 6, but you'll also be gaining Adrenaline points faster, which again will dramatically boost your damage.

Know when you're outmatched

If you see an enemy with a much higher level than you, it's best to steer well clear. I'm not saying you can't beat them if you've got a good handle on the combat of The Witcher 3. But it'll take so much time out of your day, it's really not worthwhile.

The reason for this is that if an enemy is a certain number of levels higher than you, they'll gain an arbitrary (and colossal) boost to both their damage and their defence. So one or two hits will be enough to turn Geralt into an unassuming smear on the cave floor, while several thousand cuts will be required to fell the beast and reap the (probably very underwhelming) rewards.

In particular: if you see a skull icon on the enemy's health bar, they've passed this threshold where they gain huge damage/defence bonuses. Trust me, it's just not worth your while. 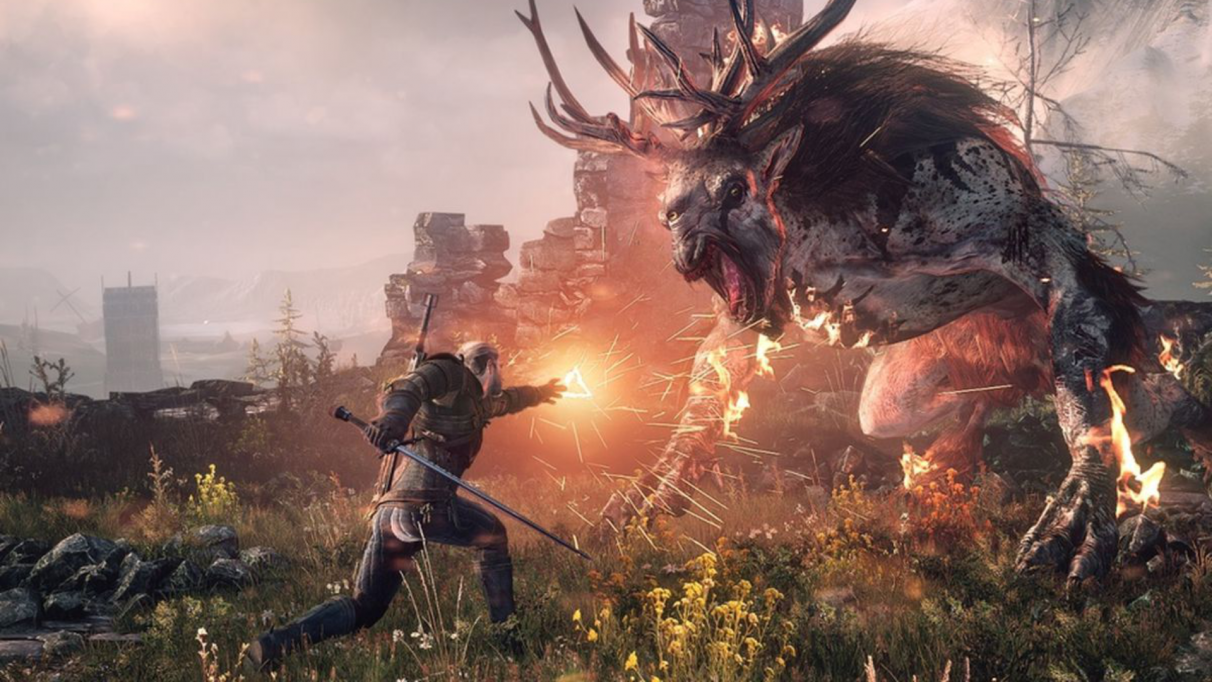 The other useful thing about Quen is that you can use it to safely learn the attack patterns of enemies. It can be pretty difficult to figure out which attacks can be parried and which can't, so use Quen and fight passively for a while so you can learn which attacks will go right through your block and which can be countered effectively.

Honestly? You should use Axii far more than you currently are. Not only is it a direct counter to certain unwanted enemy states and effects (Alghouls' spiky state comes to mind), but against many enemies (particularly humans) a good Axii in the face will render them completely useless and open to an instant one-hit-kill finisher move.

Axii is always the first sign I upgrade, partially because it's so useful in combat, and partially because it also opens up new options in conversations. And the second stage of Axii will allow you to turn enemies against one another for a short time, which can be very useful for distracting dangerous enemies.

Igni is overused by newer players who are attracted to the flashiness of the fire sign - but it's also misused. Igni's strength is in its ability to hit multiple enemies at once and force them to reconsider their life choices for a few moments while their flesh bubbles away from their bones. During which time you've taken a step back and healed up ready for round two.

What I mean is: Igni shouldn't be used just as a little extra burst of damage between strikes. It should be used to stumble enemies and give yourself a chance to recover and heal if needed. The damage over time is significant, and is interrupted if you attack shortly after casting - so just let it do its thing, mmkay?

Aard is one of my least favourite signs. It's not terrible, and in certain situations it can be excellent - for example, knocking flying enemies out of the sky without having to fumble about with crossbows. It's also excellent against the annoying piece of shit known as the Foglet, because Aard will dispel both invisibility and fog in a single blast of "fuck you".

But in general, I find myself using Aard mostly just for breaking down doors and opening up passageways, rather than for combat. At least, until I reach the final stage of Aard, which allows you to freeze enemies in place for a short time. Predictably, this is amazing both for offense and defence - but until you reach this point, I find it best to stick to the other signs.

Yrden is probably the least used sign by newer players, and what a shame that is. Placing down a slowing trap on the ground will make almost any fight half as challenging as it was before. Enemies will move and attack with such geriatric insouciance, you've got to wonder if their heart is really in it.

Yrden is also a hard counter to wraiths, who are forced into their full corporeal (and eminently sliceable) form as soon as they step inside the circle. But the fun doesn't end there! Upgrading Yrden will destroy projectiles that pass through its area of effect, and - more importantly - damage all enemies inside over time. This is a great sign, and it's a crime that many players don't even touch it outside of wraith fights.

And with that, I think we'll wrap up our guide to combat in The Witcher 3: Wild Hunt. But we've got plenty more wisdom to impart! If you truly want to turn Geralt into an unstoppable dealer of death, skill is only one half: if you want the other half, check out our Witcher 3 best builds guide. For more general advice about the game, consult our Witcher 3 tips and tricks.