Looking for tips and tricks on The Witcher 3: Wild Hunt? Perhaps you're a new player who was gifted the game over Christmas, and you're just now catching up on one of the modern masterpieces of the RPG genre? The Witcher 3: Wild Hunt is many things to many people. I'd describe it as sprawling, magnificent, and frequently baffling - particularly to newer players.

So we thought we'd help lessen the load for those still at the beginning of their monster-hunting journey with these 12 Witcher 3 tips for beginners! Below we'll cover everything from fight preparation to fast levelling, from inventory management to mods and cheats. Take a look!

The Witcher 3 tips: the essential guide for beginners

The below 12 The Witcher 3 tips have been carefully selected out of many as the truly essential game-changing tips and facts that I wish I'd known from the outset. We'll cover everything from combat and inventory management to trade, travel, and even modding. So let's get started! 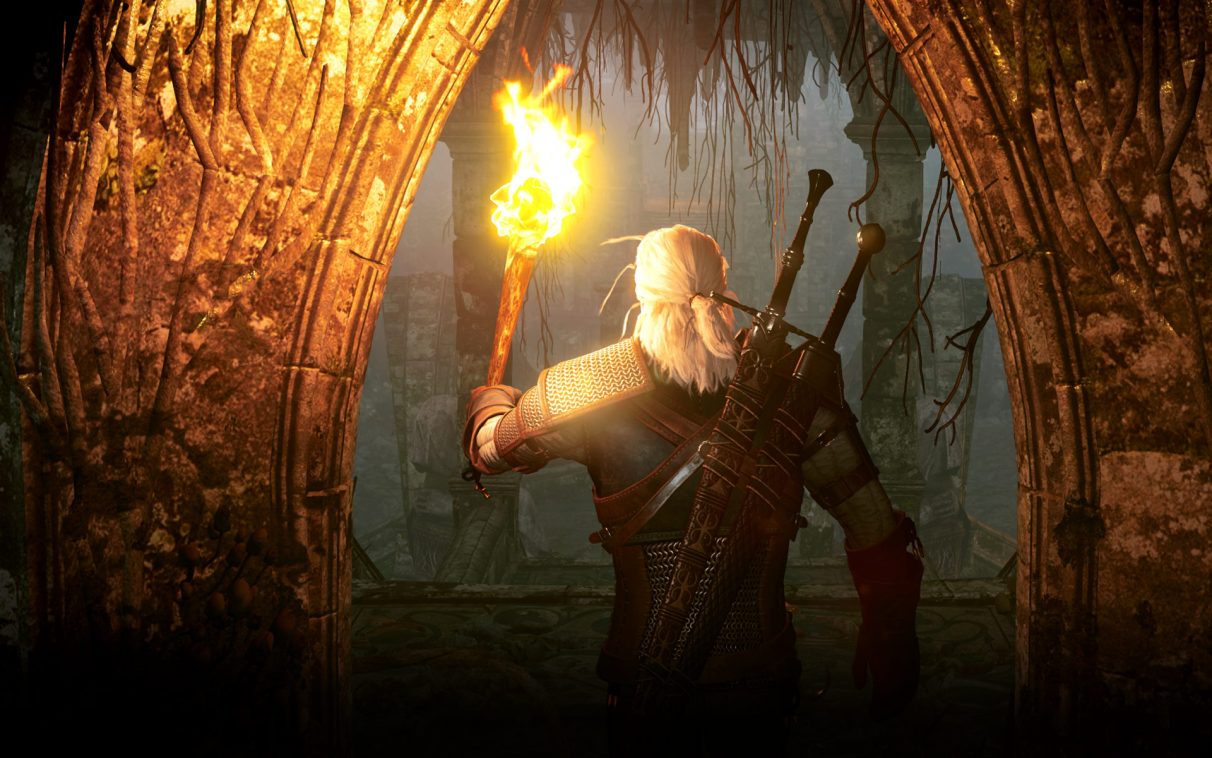 1. Quicksave before every fight

The Witcher 3: Wild Hunt can be a pretty tough game at times, particularly when you're still learning all the intricacies of its combat system. And the last thing you need is for the game to add insult to injury after you die by sending you back twenty minutes because you forgot to save. Get into the habit of hitting F5 to quicksave before every fight (and every so often in general).

2. Meditate for an hour to fully recover your health

Geralt may be a legend, but he certainly isn't invincible. You'll need to pay careful attention to your health (or vitality, as the game calls it) at all times, because you'll only regenerate health at an exceedingly slow rate out of combat. By far the best method of healing if you're on one of the lower two difficulty levels is to meditate for an hour. As long as you're in a safe place without enemies around, it's the work of a couple of clicks to bring your health back to full without using up any items.

If you're on the higher difficulty levels, you won't have access to this particular (overpowered) luxury, so the best way to heal is to brew some Swallow potions, which will greatly increase your vitality regeneration for a short time.

3. Prepare for tough fights with oils and potions

Potions and oils are the answer to the inevitable question: "how am I supposed to beat this enemy?". I like to illustrate this point using my first ever encounter with a werewolf. After handily wrecking its day during the first half of the fight, the werewolf suddenly howled and started to regenerate its health at such a monstrously fast rate that I simply couldn't kill it quickly enough.

After several failed attempts, I took a step back and told myself I need to prepare better. I looked up a few things, spent some time collecting ingredients, crafted some Cursed Oil, applied it to my blade, and tried again. Cut down the werewolf in twenty seconds flat, without taking any damage. The point is: give yourself time to prepare, and give yourself the right tools for success. Oils, potions, bombs... they're all there for a reason. 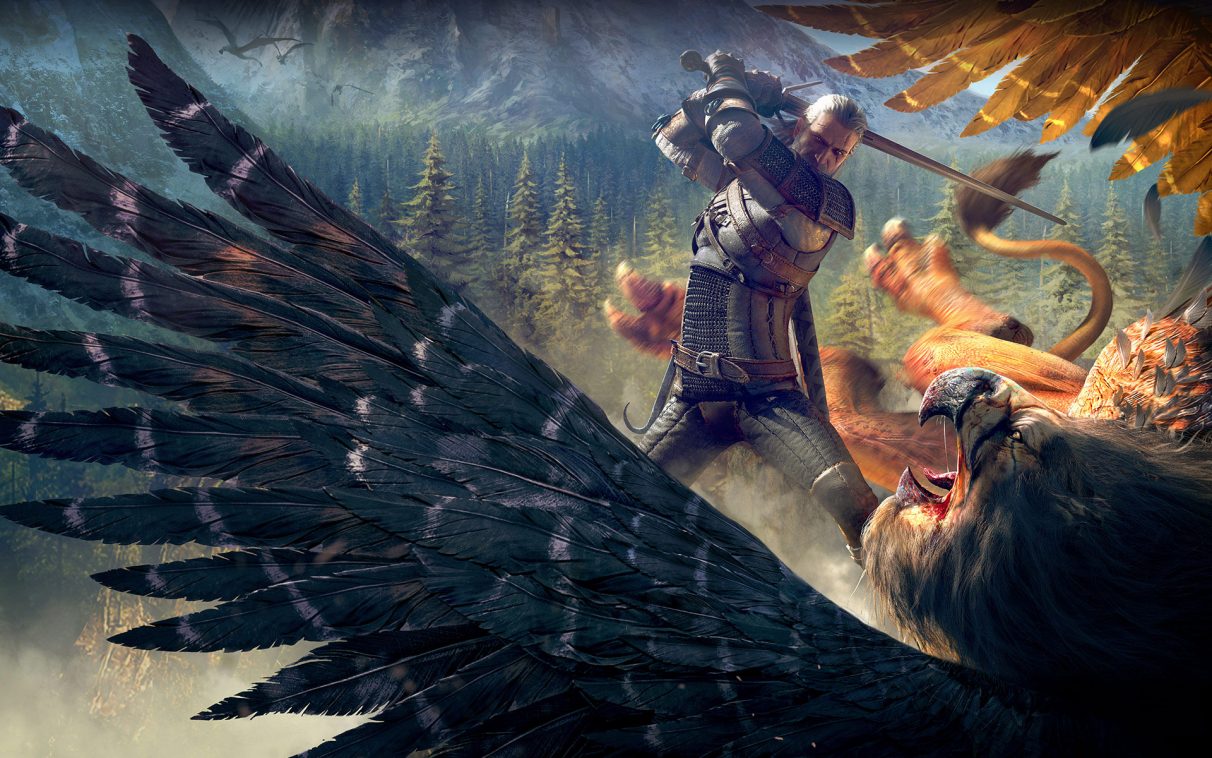 4. Learn when to dodge, when to roll, and when to parry

There are three main responses to an enemy's attack. Parrying is when you perfectly time your block just as the attack lands, and it can leave your opponent open to a counterattack. This one is particularly useful against human enemies, but many monsters will be unaffected by this riposte, and will even stun you if you attempt to parry them.

So what do you do against these foes? You choose between dodging and rolling. Dodging is good for avoiding smaller attacks while still keeping you up close and personal, ready to counterattack. Rolling is your answer to large lumbering attacks, such as a Golem's charge, where you just need to get the hell out of the way as quickly as possible. For full details, be sure to check out our in-depth Witcher 3 combat guide!

5. Head to all the notice boards when in a new region

You might have noticed that the world of The Witcher 3 is absolutely gigantic, particularly after completing the prologue and venturing out into Velen and Novigrad for the first time. It's easy to feel daunted by the enormous expanse of land surrounding you. Thankfully, whenever you enter a new region you can check the map to see exactly where every notice board is in the entire region.

Make these notice boards a priority. Reading the notices attached to each one will give you new quests and witcher contracts to help increase your level and give you some direction in a new place; and they'll also litter the area around them with new points of interest.

6. Use the roads while on horseback to gallop indefinitely

Your stalwart equine companion, Roach, is not a machine. If you're a fan of galloping without rest for miles on end to get to your new destination, you'll find yourself frequently have to take your foot off the gas (so to speak) to give Roach some time to recover.

A handy hack to help you with this is to stick to the roads as much as possible. When on a road, you can start galloping, then take your fingers off WASD. Without you manually supplying the direction, Roach will stick to the road automatically - and what's more, she'll continue to gallop but won't use up any stamina while doing so.

7. Seek out the best weapons and armor

Even with the peerless fighting skills of the Butcher of Blaviken, you'll likely find yourself overwhelmed by your enemies if you progress far enough without bothering to upgrade your equipment. Carve out a bit of time in your busy witchering schedule to go hunting for some of the unique witcher gear sets, and your efforts will be rewarded ten times over with some of the best weapons and armor in the game.

Check out our Witcher 3 best armor and gear guide for information on the most protective and powerful apparel on the Continent; and our Witcher 3 best swords guide for the same on weaponry. An excellent choice when you're just starting out (at the Velen/Novigrad stage) is to go hunting for all the basic Cat School witcher gear. You can start this quest by heading to Est Tayiar in the far east of Velen. See the helpful graphic below, which I spent three whole minutes perfecting. 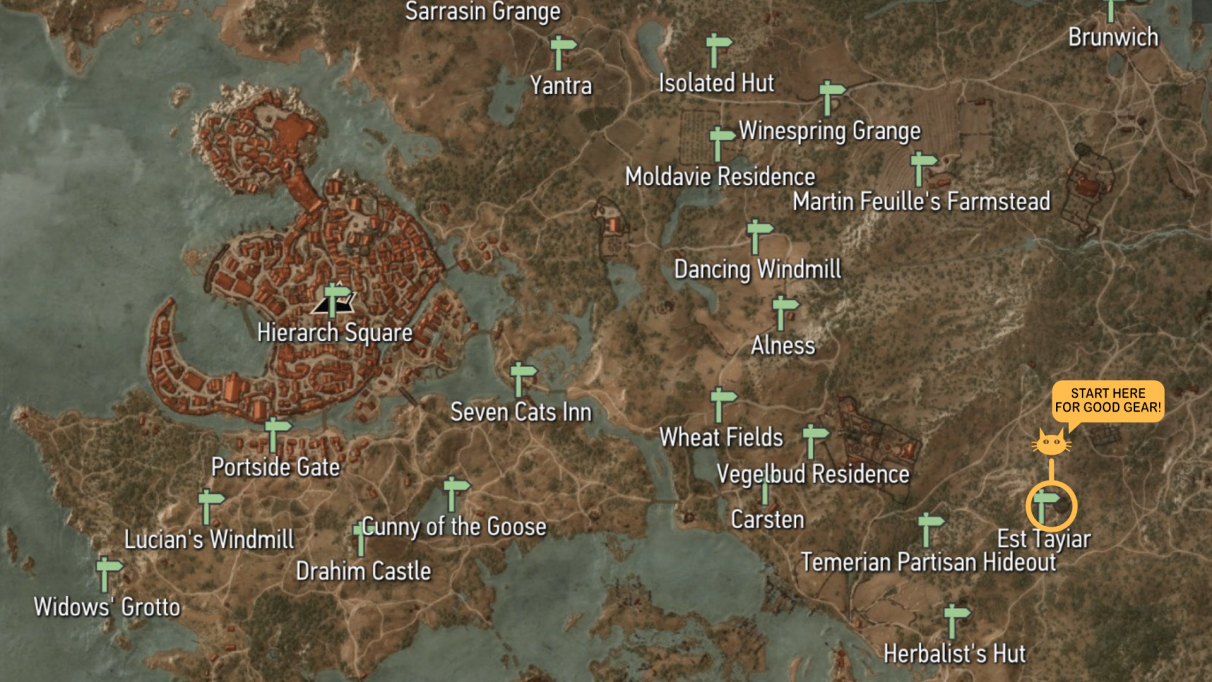 The Witcher 3 has one of the slowest rates of levelling up your character of any RPG I've ever played. Once you accrue enough experience, you're able to invest a skill point into one of many different character upgrades, improving everything from Geralt's combat and sign skills to his potion overdose threshold. So it's a good idea to do whatever you can to hurry along this cumbersome process of self-improvement.

Side quests and witcher contracts are a good way to go here, but an even better tip is to seek out each of the Place of Power stones scattered across every region. These stone monoliths can be interacted with to boost the intensity of one of Geralt's five signs for a while - but they also give you a free skill point each the first time you draw from them. There are enough of these stones scattered about the maps that seeking them out will give you a truly colossal advantage throughout the campaign, allowing you to put together the very best Witcher 3 builds as early as possible.

9. Keep an eye on encumbrance levels, and sell to the right people

Oooh, sneaky me, combining two tips into a single heading! Well, these two nuggets of wisdom are nicely intertwined, as they both concern inventory management. Possibly the most frustrating feeling in the entirety of The Witcher 3 (for me, at least) is picking up one too many swords or drowner brains and becoming overencumbered, unable to run or fast-travel. You can check how much weight Geralt can carry and how close you are to overencumbrance by consulting the top-left corner of the inventory screen.

So how do you avoid this unfortunate state of being? Other than upgrading your carrying capacity with saddlebags for Roach and certain skills, you'll need to make semi-frequent forays into the nearest town to sell your items. The key thing to remember here is that different vendors will value the same things at different prices, so it's important to sell the right things to the right people. Sell your weapons and armor to the blacksmith, sell your ingredients to herbalists, and so on. That extra moolah will stack up over time, trust me.

10. Repair your gear as often as needed

Going back to equipping your dear old monster-hunter with the best tools for the job: you will find that during your travels and tribulations, your weapons and armor will start to take a beating and become damaged. This affects the overall effectiveness of your equipment: weapons will deal less damage than they should, and armor will absorb ditto.

Thankfully repairing damaged equipment is dead simple. All you need is the right kind of repair kit! These repair kits come in two types (weapons and armor), and can be bought from blacksmiths or just generally found out in the world as loot drops, and they will instantly undo a portion of the damage sustained by the item in question. And even if you've no repair kits on hand, you can just head to the nearest blacksmith and pay them to repair all your gear.

One of the longest-standing memes about the infamous Geralt of Rivia is his laughable vulnerability to fall damage. Werewolves and wyverns? No problem! But a three-metre drop? Instant death.

I wish I had a good tip to help you avoid fall damage. At times you can mitigate some or all of the damage by rolling just before you hit the ground, but this is far from reliable. All in all you should just steer well clear of cliffs and drops of any kind, and if you have to go near one, make sure you quicksave before you do!

Oh wait, there is an answer to the ridiculous fall damage: Mods!

This is of course not a compulsory step in enjoying your time with The Witcher 3, but the game does have a fantastic and flourishing modding community (even after five years), and if you've an issue with the game, no matter how small, chances are there's a mod that'll fix that problem for you.

Most mods are incredibly easy to install as well. Simply download and extract them, then navigate to your Witcher 3 steam folder (which should be under something like C:/Program Files/Steam/steamapps/common), create a new folder called "mods", and drag and drop your downloaded folder into your new mods folder. Then run the game. Simple as that!

And if you're looking for even more ways to alter the game beyond what the developers allow, then feel free to peruse our list of The Witcher 3 console commands and cheats!

Thus concludes our list of essential Witcher 3 tips for beginners. I could go on and on, because there's so much to learn and conquer in this colossal RPG masterpiece - not to mention various chances for Geralt to become cosy with certain other characters during his journey. If you want to make sure you don't put a foot wrong when it comes to wooing your chosen beloved, check out our Witcher 3 romance guide!