Ever since Avatar: The Last Airbender (the original cartoon, not the film) did the rounds on TV, the concept of magic as martial arts has been steadily rising in popularity. Who needs MP bars or long casting times when you can just use the elements as extensions of your body? Punch with the force of a boulder, leap like the wind and kick arcs of flame into people's faces.

Wizard of Legend, Contingent99's new action roguelike for one or two players (local only) builds stylishly on the concept, putting you in the swooshy cloak of a mage-in-training, invited to a festival of simulated dungeon-crawling/martial arts exhibition. No fate-of-the-world stuff here, just mystical showboating.

The heart of Wizard of Legend is feeling like a magical kung-fu master from the word go, even when you're getting your face kicked in by angry dungeon-dwellers. While every wizard needs to equip a basic attack spell, usually close range and combo'able, and one evasive spell, you're free to fill your other four active spell slots with whatever you please and fire them off as often as their (surprisingly rapid) cooldowns allow. While I played exclusively on gamepad (mapping the six spells to the face buttons and bumpers), you can play with mouse and keyboard if you so please.

One of your spell slots is dedicated to a personal 'signature' spell. Build up a long enough combo against your enemies and you'll be able to cast a bigger, fancier version of it, akin to a super-move in a fighting game. Beyond your signature charge and your health though, there's no stats to track here. You're a mystical martial artist, not an accountant. There's also a huge number of spells to collect and a lot of fun combat synergies to be learnt between them. A special currency earned through dungeon runs lets you unlock more, although each major boss defeated gives you a free spell unlock too.

Wizards are like Batman; their greatest strength lies in preparation. Also snazzy capes. While many other action-roguelikes effectively send you into the dungeon naked (literally, in the case of Isaac), Wizard of Legend has you fill four of your active six spell slots from your personal grimoire, and choose a single build-modifying artifact to start your run with. Once in the dungeon you can grab up to another 11 artifacts, plus fill remaining spell slots, but you start each game with a clear idea of what kind of wizard you're going to be today, and as there's no XP or level-based progression, your shifting inventory defines you further. 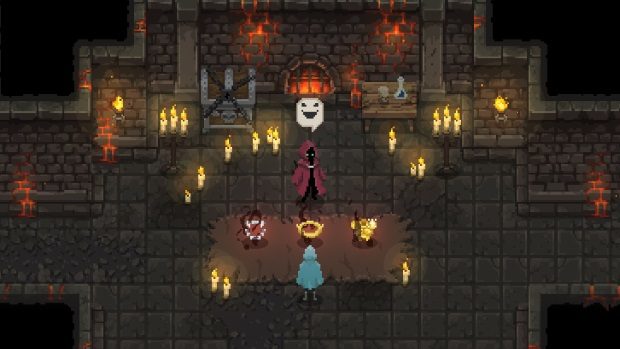 I have a special fondness for Wizard of Legend's cursed artifacts, too. They tend to be more powerful than their regular counterparts, but offset by significant penalties. A personal favourite halves the cooldown time on all spells, but at the cost of doubling damage taken, effectively making you a berserker mage. It can turn you into a whirling dervish of mystical violence that almost never has to pause for breath, but one mistake and you can find yourself combo'd into oblivion in the blink of an eye. Real risk and reward, and it radically alters the way that you play the game.

If there is one flaw to Wizard of Legend's combat engine, it's that it can be visually noisy in spite of the crisp and clean pixel-art. While less of an issue early on in a run, later stages of the dungeon have enemies using their own elemental magics more often, and when there's multiple characters spamming opaque particle sprays in every direction (exacerbated further when playing in local co-op) you can easily lose track of what's going on. As the dust settles on a messy exchange, you might not even be able to tell if it's you, an enemy, or both that just got temporarily encased in ice by freezing attacks. Still, even this flaw can be worked around. With experience, I found myself favouring cleaner spells with longer attack ranges, although your style may vary. 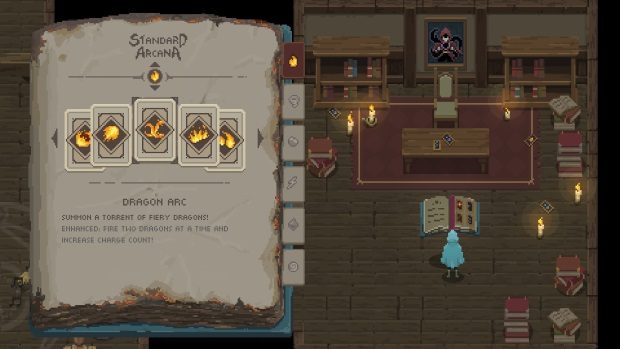 So much love and attention has clearly gone into the combat engine, spells and feel of Wizard of Legend that it's genuinely frustrating how little meat there seems to be on the dungeon generation side of things. Each run through the dungeon has you tackling the Ice, Earth and Fire zones in random order, with every zone being two regular dungeon floors (each capped off with a mini-boss fight against a larger version of a regular enemy), followed by a boss-only floor containing one of the three elemental lords, plus a final fight against a master of Chaos magic on the final, tenth floor.

The problem is that there's little functional difference between the three dungeon tile-sets. Aside from some infrequently encountered environmental hazards and some palette-swapped elemental variants of the basic grey enemies, it's the same square rooms all over again, and again, and again. The biggest difference between fire, earth and ice is the accent colour: red, green or blue. The elemental lords fall into repetition just as badly - while the order you encounter them in affects their difficulty, once you've memorised the attack patterns of each, they're easy targets. 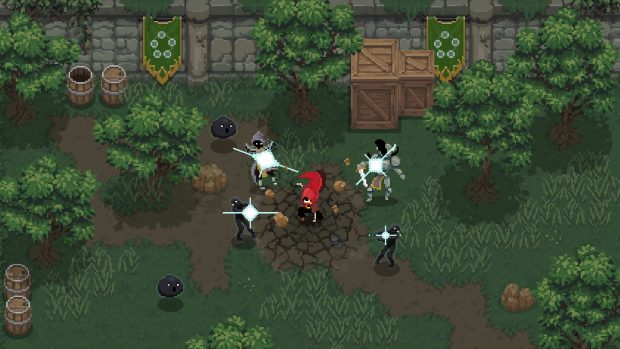 Even the special rooms in each dungeon floor feel immediately familiar. There's what feels like a half-dozen NPC shopkeepers. One sells spells, one sells artifacts, one gives you a free pick from one of three cursed items, plus a few others. Each floor contains three - always three - and once you've located the boss chamber, you can warp freely between any NPC and the end room. It's convenient, and quick, but not interesting. There's so much complex interplay of mechanics in the combat engine, but the world itself is just bland. Even the few lines of dialogue repeat too often.

What surprised me is that the repetition didn't really bother me as much as I thought it would, at least while I was playing. I absolutely wish there was maybe twice the number of basic enemies and environments and many more bosses to fight, it all seems to matter a lot less when I'm whizzing around each arena, perfectly timing spell cooldowns to the rhythm of the battle, expertly isolating troublesome enemies with crowd control spells while I pick off their friends. Wizard of Legend's very structure feels unbalanced, but its good side is enough to carry the weaker half. 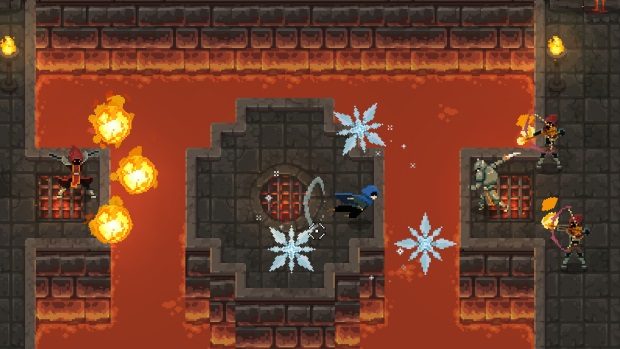 Wizard of Legend is a good, if lopsided game. The moment-to-moment combat is highly flexible and seldom anything less than satisfying, especially in co-op. It's just a pity that while your arsenal of spells and artifacts is massive enough to be remixed a thousand ways, the maps, bosses and enemy types only fit together in a handful of configurations. If you can overlook the repetition in targets and mix up your own playstyle, this one's an easy recommendation, but for players who stick with the tried-and-tested, Wizard of Legend can slip into monotony.