Wolfenstein II: The New Colossus is, for better or worse, very much BJ Blazkowicz's story, and outside a few shocking shots of the wider world, isn't entirely interested in showing us how Nazi rule in the 1960s affects the individual lives of others. We already knew that story-based DLC was on its way, but now we have dates on the four-part season pass that aims to make fascist-occupied America more than the tale of one man and his special submarine friends.

Say hullo to Joseph Stallion, Jessica Valiant and their chum who must be eternally resentful that he did not also win the amazingly ridiculous surname lottery, Gerald Wilkins. Joseph Stallion! Good lord.

The Freedom Chronicles is a four-part DLC set - i.e. that's yer season pass - starring this new triptych of freedom fighters, and which Bethesda claim will offer "fresh perspectives" on the battle to "make America Nazi-free again."

You can buy the pass right now, which will get you into the first chapter, Episode Zero, right away, with three others to follow on December 14, January 30 and sometime in March. 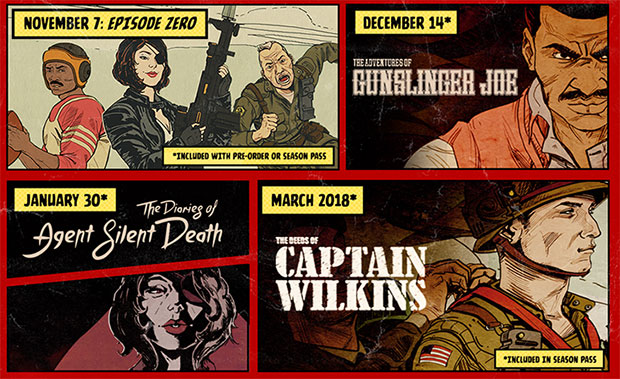 Here's the running order, in fact:

Episode Zero introduces you to Joseph Stallion, Jessica Valiant and Gerald Wilkins as they fight for freedom in the American Territories. Blast your way through Nazis using unique abilities and an arsenal of guns in this opening DLC mission.

The Adventures of Gunslinger Joe

As former professional quarterback Joseph Stallion, smash through Nazi hordes from the ruins of Chicago to the vastness of space!

The Diaries of Agent Silent Death

As ex-OSS agent and assassin Jessica Valiant, infiltrate Nazi bunkers in California and discover the secrets of Operation San Andreas!

The Amazing Deeds of Captain Wilkins

As the US Army’s renowned hero Captain Gerald Wilkins, embark on a mission to Nazi-controlled Alaska to dismantle Operation Black Sun!

On the face of things, it's playing to Wolf 2's silly side, although one of the things both this game and its predecessor The New Order do rather well is to convey a surprising amount of emotion and horror through the lens of absolutely ridiculous nonsense. One of the other things they do well - broadly at least - is to frequently switch up the environments in often surprising fashion, and these summaries suggest the DLC's going to keep that up.

All told, this stuff is supposed to add up about nine hours of Reich-bothering, at a cost of £18/€25/$25. I haven't quite finished the main campaign yet, but hell, I'm down for more so long as it really is in the same vein, and we're not looking at a going-through-the-motions The Old Blood situation.