Another Final Fantasy outing is heading to PC today, this time in the form of the painfully adorable World of Final Fantasy, which launched on Sony’s consoles just over a year ago. It’s a spin-off that celebrates the long-running JRPG series by turning its myriad characters and beasties into tiny chibi summons that the player can carry in their pocket and bring out during battles.

World of Final Fantasy sees siblings Reynn and Lann exploring the magical world of Grymoire to “rediscover their past and save the future”, which sounds like a whole bunch of vague nonsense. It's simpler and more linear than, say, the open-world of Final Fantasy 15, though there are plenty of monsters and characters to collect, and you can travel back to old areas if you've missed something. Also just check out how cute little Cloud looks. I just want to eat him up! 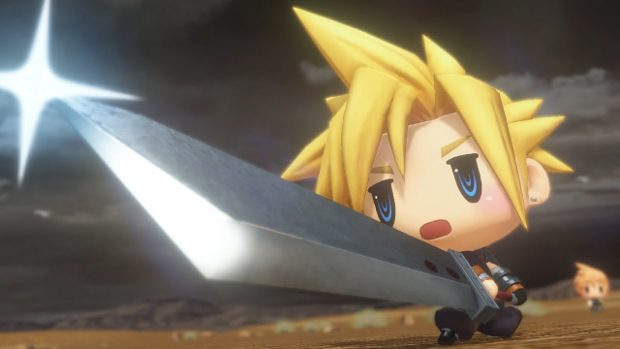 It’s these wee summons that make World of Final Fantasy a bit different from the numbered games and other spin-offs, like the Tactics series. There’s more than a hint of Pokémon about the way you can capture and evolve the summons, and they can also be turned into magicite, granting ability boosts. Also you can ride them.

You don’t just send Cloud and chums out to fight for you -- you’ve got to stack them. By placing these summons on top of each other, you can create monster towers, using the summons’ size, element and order in the tower to take out enemies. It’s a bit bizarre. These towers can also come in handy when you’re exploring the vertically stacked dungeons peppering the world of Grymoire.

Our pals at Eurogamer got Simon Parkin to review World of Final Fantasy last year. Here’s what he had to say:

In a manner that has come to define Square's post-Sakaguchi output, the game relies on fan-service in lieu of strong plotting. For the audience, perhaps this will be enough. But despite the pleasing intricacies of its battle system, World of Final Fantasy is unable to transcend the realm of tribute.

Oh dear. I confess that I probably fall into the category of people for whom the fan service and adorable wee summons are enough. Maybe wait to see how the PC version stacks up before jumping in today. There's a Day One version, but it just offers a soundtrack and some wallpaper, so nothing you can't miss. Both versions include the extra PC summons, like Sephiroth, White Chocobo and Glow Moogle.

World of Final Fantasy it out today on Steam. As always, the unlock time on the store page is frustratingly vague, but it should be this evening.