This year for my holidays I was going to go on a road trip around a European country before it became too late, but then this summer became a bit of a write off. Enter the latest DLC for EA's blockbuster life sim The Sims 4, a combined winter wonderland and chill hiking holiday. Snowy Escape is set in the "Japanese inspired" Mt. Komorebi, and the headline is that your Sims can do loads of winter holiday stuff. Having had access to a preview build, I have already shared my thoughts that Snowy Escape may actually be the precursor to Skynet, so this time I will ignore that sinister aspect of it and just share some holiday snaps.

I confess, I have never been on a trip like the one your little people can take in Snowy Escape. I went to a university that had a winter sports society (I cannot remember what it was actually called) but basically their whole thing was that they went on skiing holidays together. I was not a member of this society. Anyway, here are things you can do on your virtual Snowy Escape.

The Sims I made to test the DLC lived in Senbamachi, "the town of a thousand leaves" (and like previous expansion pack Eco Lifestyle, the neighbourhoods seem curiously fake. There are five lots in each, and everything else is just kind of a cardboard set that you can't interact with). Senbamachi is the older town in the region, and has places of scenic interest including a bamboo forest, cave shrine and large temple to visit as you do your scenic hiking. The hiking here was probably my favourite bit, because you get to go on a nice walk, and if you go with someone or run into other Sims, can get a bit of socialising out of the way as well. There are, reportedly, little spirits to be found whilst hiking, but alas, I did not encounter any.

Getting attacked by centipedes

I did encounter some massive fuck off bugs, however. There is an unpleasant animation accompanying a centipede attack. The whole thing upset Yasmin, the Sim in question who was attacked, and poor Glen who was with her (he did not like seeing nature rearing its ugly head, but tbh I thought he was being a bit dramatic, because it's not like it happened to him). You are able to purchase bug spray to stave off incidents like this.

Sharing a delicious hotpot and sitting in awkward silence 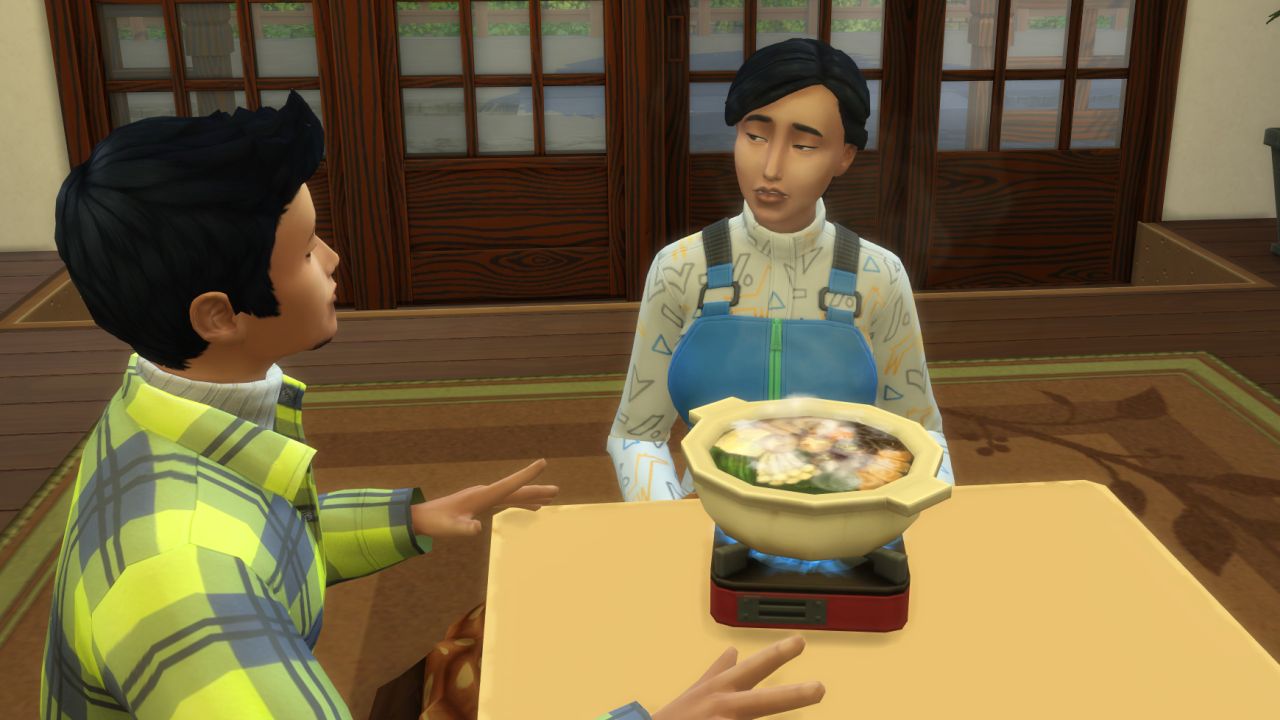 There are, according to lead producer Graham Nardone, 150 new objects for build mode, and two of these are the heated kotatsu table, and the hotpot pot, which lets you have cosy shared dinners. Unfortunately, when I snapped this screenshot Glen and Yasmin barely knew one another and the dinner was pretty awkward. Luckily, they had bonded during hiking so their friendship persevered (also despite the fact that Yasmin has the double bedroom upstairs and Glen is in the tiny single bed room downstairs that is clearly intended for a child).

Sharing a hot spring bath and sitting in awkward silence 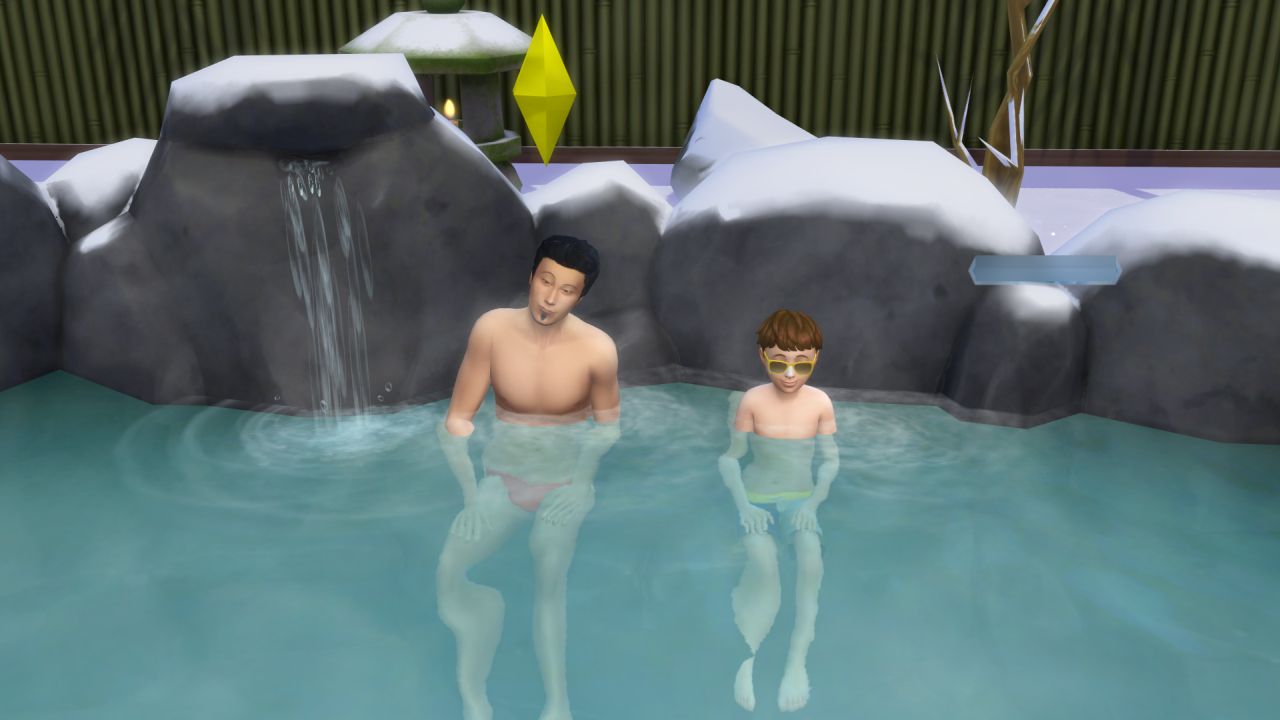 According to Nardone, Snowy Escape is partly about chasing your thrills, but also about "finding your zen", which he defined as being "about some of those relaxing moments and slowing life down a little bit". Hiking comes under that, but so does having a big ol' soak.

There are a few different versions of hot baths that you can get from build mode - the one pictured here is supposed to look natural, but there's a kind of cool modern one, too - and one of the community lots at the foot of the mountain is a public onsen bath house. Here we see Glen sitting next to a child he does not know. I didn't make him do that. They were the only two people in there as well, so it's kind of extra weird. I have no idea where the children's parents were. Also, I only sent him to the bath because he was unhygienic after a load of skiing, but the hot spring bath doesn't actually affect your hygiene. You have to have a shower afterwards for that.

Mt. Komorebi comes with new festivals, which personally I can never be arsed with (I especially hate the Thanksgiving-esque one that came with the Seasons DLC, where you have to appease some gnomes and if you do they leave behind a spray of food seed packets all over your floor in what I presume is some sort of horrible metaphor for fecundity). But Wakaba, the modern town area, has the Children's Festival, where you can go on a virtual void critter hunt with your phone. This festival is hosted by Yama Chan, the terrifying mountain mascot. 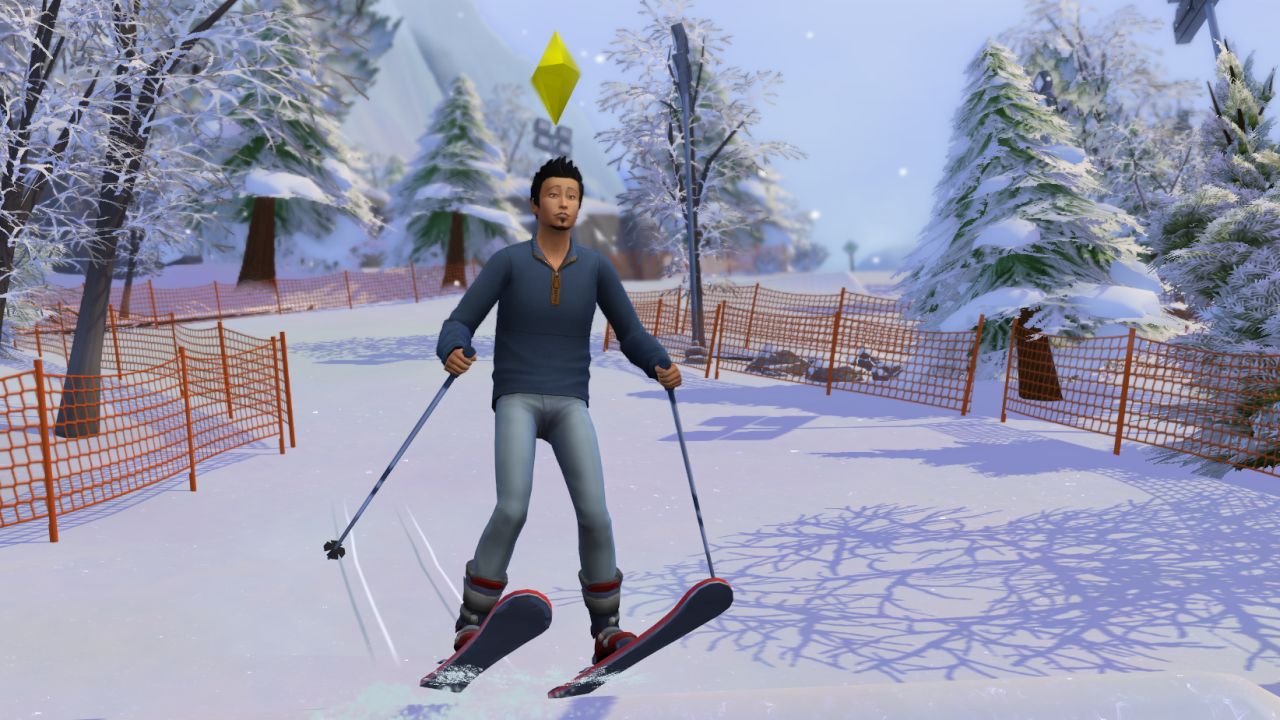 The final new neighbourhood in Snowy Escape is Yukimatsu, which is where you can go for your thrills, spills and chills. There are lots there that are currently expensive rental holiday homes for your extended ski holidays, as well as the slopes themselves. Glen actually did a load of skiing. He also refused to do it in the new winter sports clothes I had picked out for him, and kept changing back into what appear to be bootcut jeans, which I don't think are ideal for the activity.

There are different difficulty slopes, just like I am led to believe there are in real life, and you can also choose different intensity goes for your ski runs - whether you want to push it to the limit (limiiiiiit!) and do sick jumps, or not. They're also "not preset paths", according to Nardone, so your Sims will choose different routes down the mountain each time they do. They can also absolutely stack it once they get to the bottom, which happened to Glen quite a lot.

Also, you can buy skis from vending machines. And the vending machines can kill you, by falling and crushing you. This is a returning death from The Sims 3, and a popular feature! 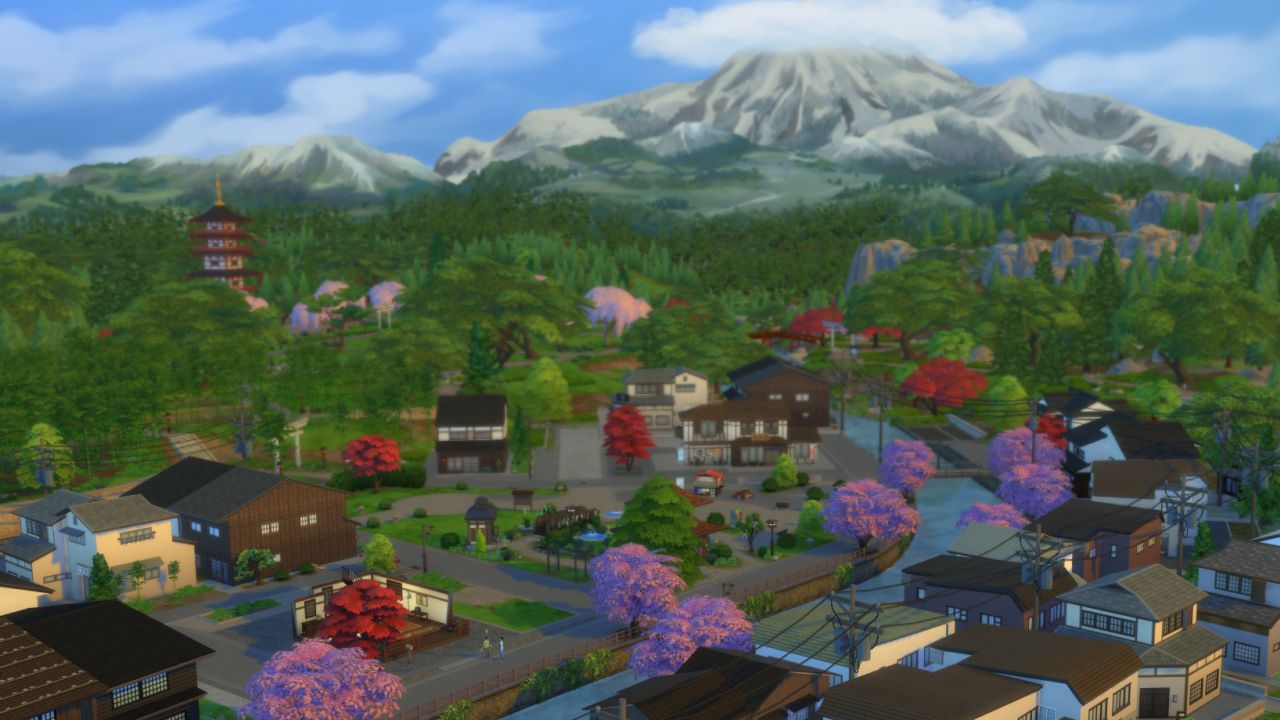 You know what else can kill you? Nature. It is possible to climb to the top of the mountain, although warm clothes and a tent are advisable. The rock walls get more difficult the higher you get, and your Sims could have a very tragic accident. Unfortunately, Glen did not have the climbing prowess required to summit Komorebi. But it was probably for the best.

The mountain also comes with the chance of some pretty bad weather. "We do have intense weather events that happen in Snowy Escape," said Nardone. "Those are all random chance. As you get higher and higher up the mountain, the chances of that occurring get higher and higher." I should point out, you don't need the Seasons DLC to experience any of the snow or snowstorms in Snowy Escape, which will be of great comfort to your Sims if they get stuck in one, I am sure.

Fucking in an ice cave

I didn't do this, but it's a thing I was told you can do. Wait, has it been officially acknowledged that 'WooHoo' is fucking, or nah?