If Peggle-era PopCap (Gawd rest its consumed soul) had survived into the era of survival, I reckon they'd have made something a lot like Astroneer. Where other sci-fi don't-die-'em-ups are soundtracked by the angry buzz of e'er-encroaching death, Astroneer's is all endorphin-inducing rising notes, delightful popping noises and the happy whirr of toylike tractors.

Slowly asphyxiating to death in an unforgiving alien wasteland has never been so joyful.

In description alone, Astroneer sounds perhaps over-familiar. You've crashed-landed on an uninhabited planet, but fortunately you have, via a trumpet-like gun-tool clearly bought from the Early Learning Centre, the power to transform its various raw materials into an assortment of gadgets and buildings. Resources can be cooked into other resources, from which you are blessed with bigger and better erections, and generally you escalate from sad little plastic hut to hive of industry. You know the drill.

Now, I can't say much about No Man's Sky, the most obvious point of comparison for a game about exploring and relentlessly mining strange new, procedurally-generated worlds, because I did a small amount of writing for it. Purely to point out the factual difference, however, I'll note that NMS's survival modes are broadly defined by obtaining resources in order to not be ambiently murdered by the various cruel elements.

By contrast, Astroneer isn't particularly interested in fertilising its alien earth with your decaying meat -- though it can and will, albeit with little consequence -- but instead its wide spread of resources exist almost exclusively for building with. Though outwardly just as lonely an interplanetary vacation, the tone's more Vengaboys than 65daysofstatic. Tragically, I meant that only metaphorically, not literally.

"I made this planet for you, do what you like with it", is the philosophy here. All you need to do is remember to breathe, which is to say regularly construct more oxygen tethers, creating a vast pipe network of life-giving air pumped from your base, to keep you alive wherever you go. This is by far my favourite aspect of Astroneer -- leaving your mark, harmlessly, upon this new world, a glowing breadcrumb trail of everywhere you've been. This includes the underground caverns you fall into, or carve out yourself, delightfully. The tethers dual-purposing as oxygen extension cords and gentle strip-lighting is a stroke of design genius. 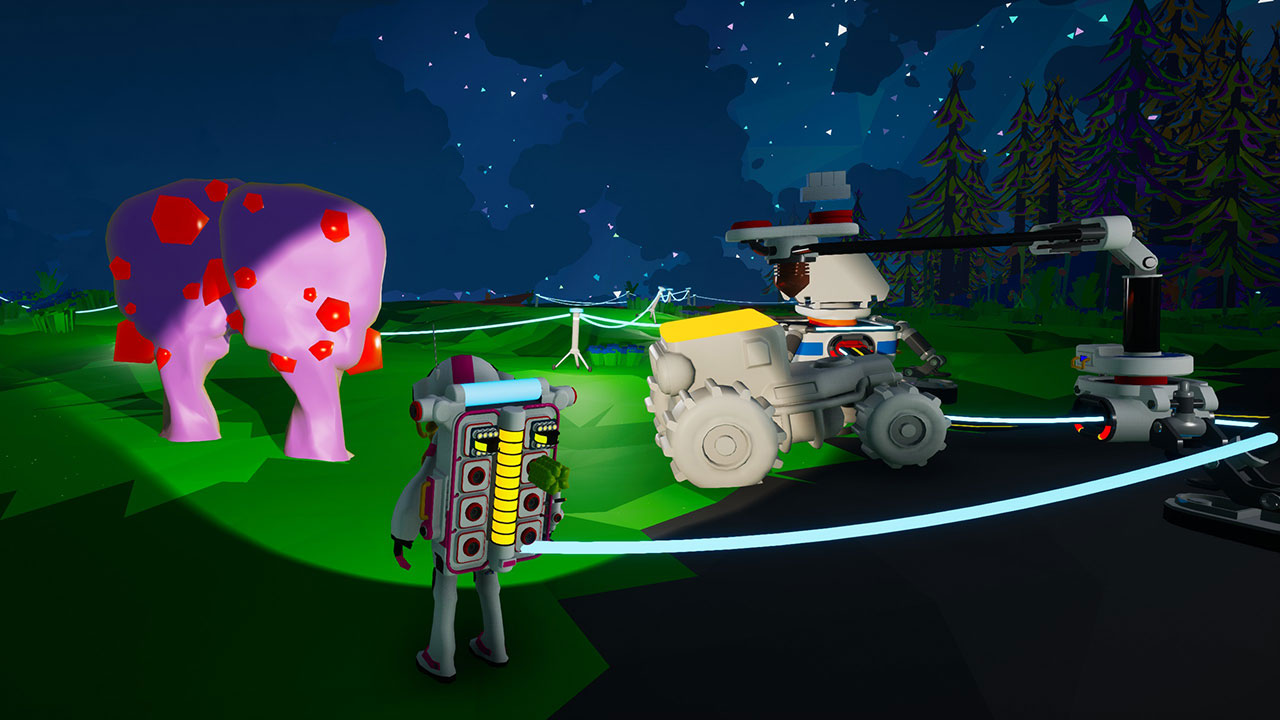 It brings a certain life to these still places, and it acts as a casual memory aid to where certain resources, or tantalising alien monuments, are. I never felt I needed a map, because the land itself became a living chart of my travels/the places where I'd dug a bloody great hole in the grand.

For all that, the planets themselves aren't particularly visually interesting. The colours pop and the skies are lovely, but the blandly blocky terrain and flora aesthetic is uncomfortably close to some half-remembered CBeebies CGI show I had to grimly sit through every morning for a year. Fortunately, the ode-to-joyful, PopCappy sounds, the jaunty wobbles as you play generators and solar panels on their bases and the baby-toy chubbiness of everything you build goes a long way towards compensating for that anodyne foundation.

Also worthy of praise is how Astroneer leaves a lot unexplained, in terms of how to craft and build, but its non-sadistic nature meant I figured everything out through experimentation, with the galling risk of doom or wastage. If I put this mineral here or connect this cable to that, what happens? Nothing or something, basically. This is about the joy of discovery, not punishment for failing to second-guess. 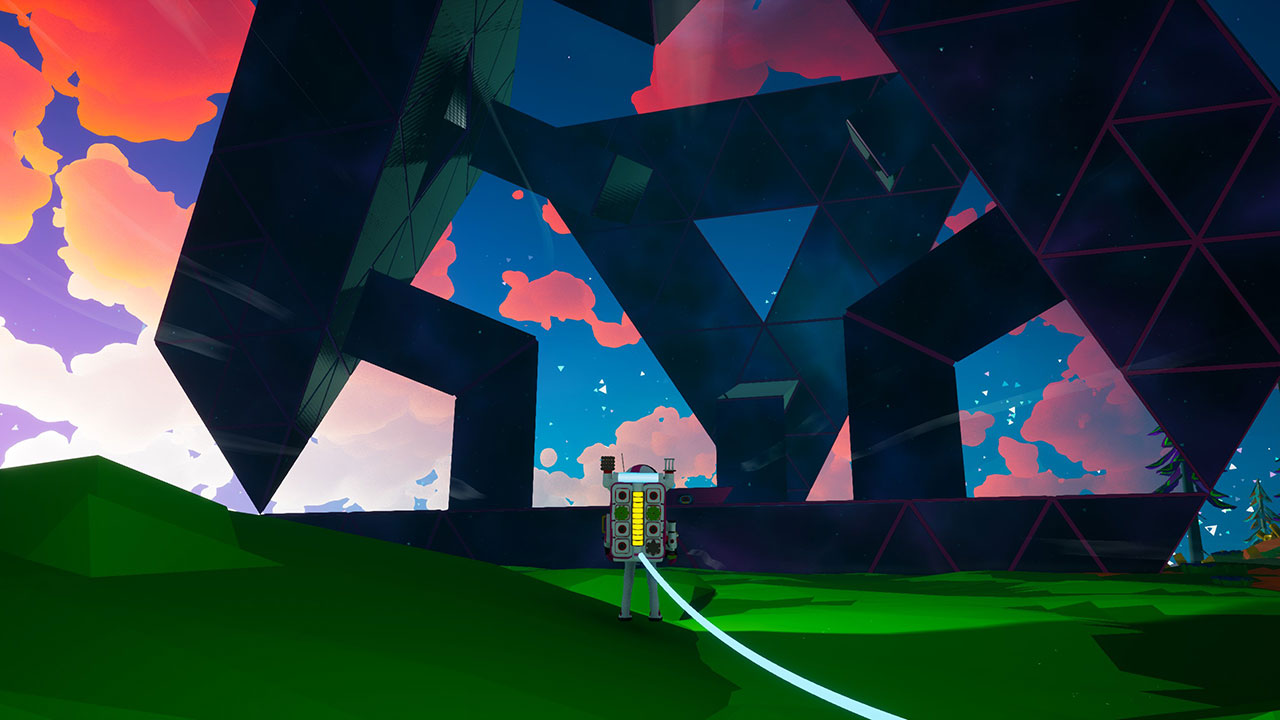 If all this makes Astroneer sound a little slight, I don't disagree. The question here is whether a survivo-build game of this type should become a second job, or if it's perfectly acceptable -- a relief, even -- for it to be more about mooching about and seeing what happens. There are high-level goals, both in the steeper resource requirements of top-tier tech (including various vehicles) and the option to 'win' by creating a way off-world, but there's no pressure to chase them. This is just as much a game about seeing what's over there.

Which is also its greatest failing. There are a few minor threats and surprises, a few eerie monoliths, and a few slightly desperate bouts of spelunking through an underground cave system you tumbled into without having enough oxygen tethers left. Really though, it always ends up becoming about which resource or free piece of tech lies at the end of your bouncy trek through dayglo plains or sparkly highlands. Its jigsaw pieces, jolly and randomly-scattered as they might be, only assemble in a finite amount of ways.

That can be remixed significantly by playing it in up to four-player co-op mode, in which you'll spend at least as much time staging tractor races and playing football with hunks of mysterious alien rock as you will trying to collaborate on construction. Even so, Astroneer is never going to take over your life in the way some its peers and rivals do. 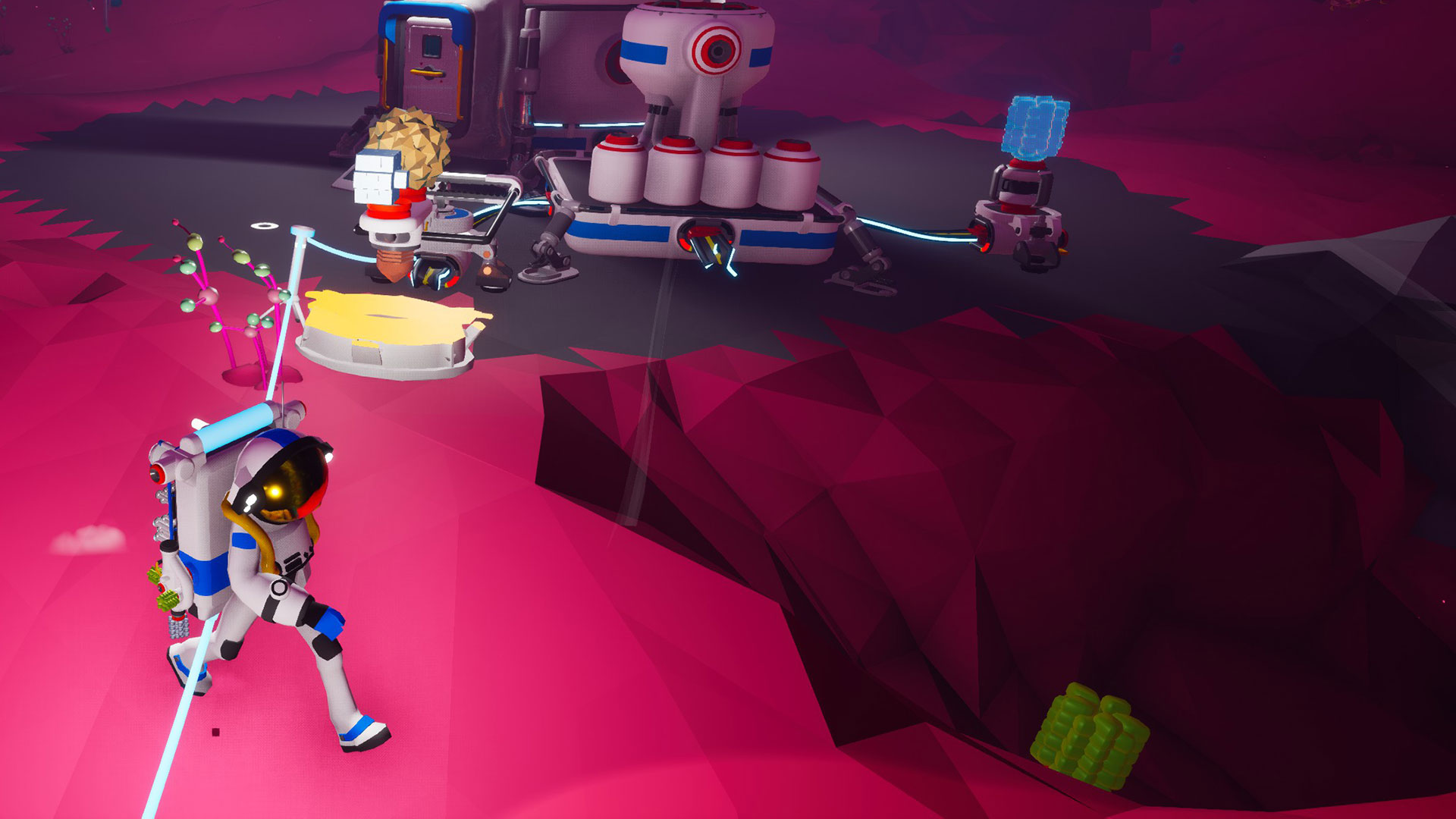 I don't begrudge it that. It's refreshing to have One Of These that doesn't require playing every day for three weeks before I can say I truly understand how it works. And, at the risk of showing my prejudices too much, it's also a great one for playing with a kid. It isn't a kids' game, but it ticks both boxes fairly effortlessly.

Astroneer's been in early access for over two years, and there is a sense that this release version contracted a mild case of That'll-do-itis, rather than going to the new places it might have done. Sure, a ballpit offers more long-term play value if there's hatch on its bottom that opens up into a world of dinosaurs, spacefighters and alien civil wars. Sometimes, though, all you wanna do is jump into a ballpit.