Anyone who has poured hundreds - thousands - of hours of hard work into Close Combat: The Bloody First and has the skin of an Opel Blitz rather than a Jagdtiger risks taking a substantial morale hit if they read beyond paragraph ten of this review. After telling you about the ways CCTBF is superior to its august ancestors, I'm going to tell you about the areas in which it's markedly worse. Once I've pointed out that the long-awaited 3D incarnation of Atomic's WW2 skirmish sim is by no means incapable of serving up diverting tactical encounters, I'll attempt to explain why I may never play it again unless major remedial work is undertaken. 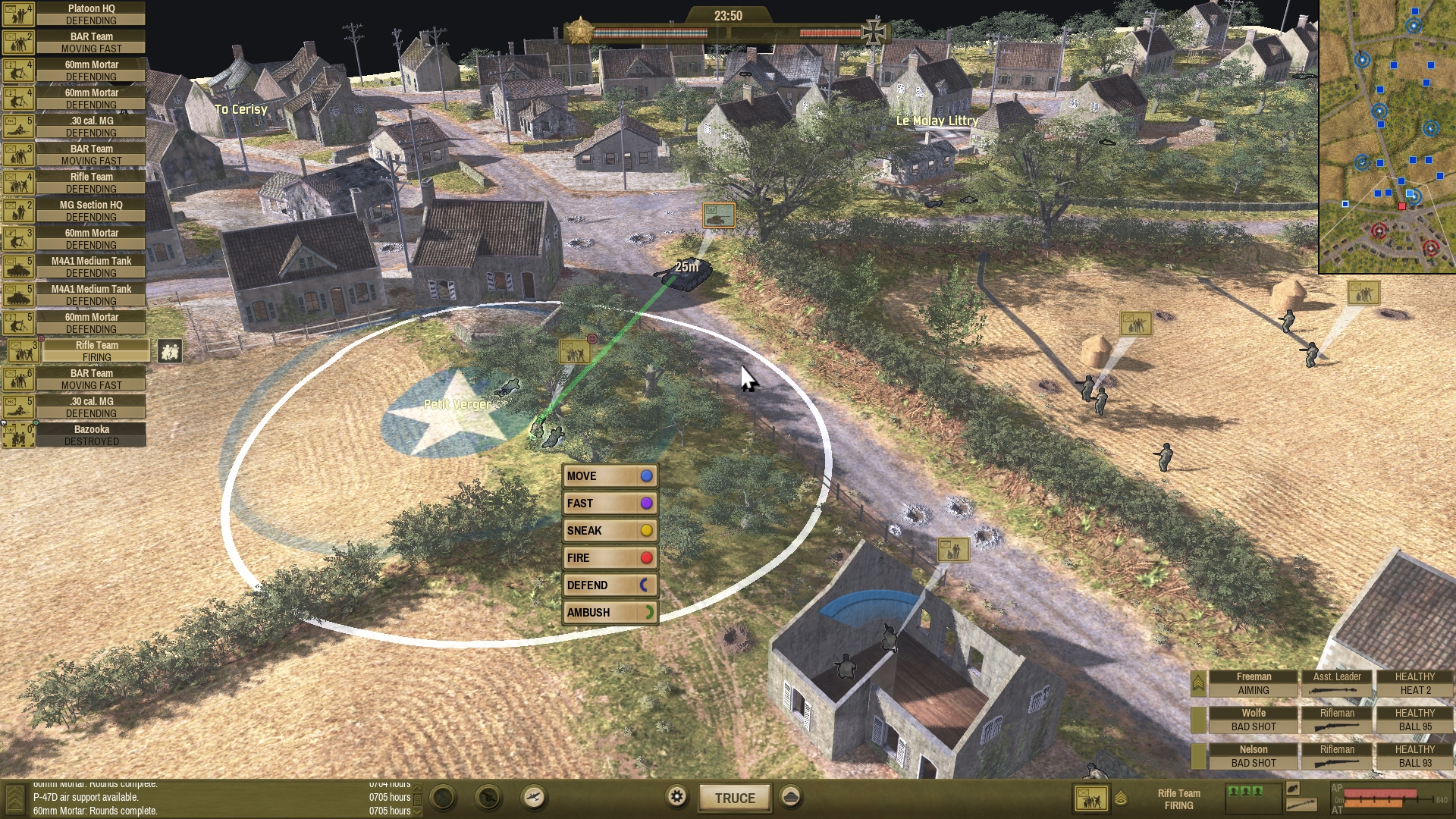 Since penning last Friday's pre-review I've played unquestionably CCTBF's finest third (the 33% set in leafy Normandy), discovered how to unshackle the game's cruelly confined camera, and come to appreciate a host of small but invaluable play aids that I'll sorely miss when, as I do from time to time, return to series pinnacles A Bridge Too Far (CC2) and Russian Front (CC3).

Freeing the camera via a simple configuration file text edit, transforms CCTBF's headline innovation from a pointless aesthetic gimmick into a genuinely useful tactical tool and a significant immersion booster. For the first time ever in CC we get to see battlefields almost exactly the way our tiny troops see them, and this decision-influencing, empathy-enhancing privilege, in combination with a high-fidelity LoS system and maps generously sprinkled with view complicators and contour lines, gives a very conservative design much-needed freshness. True, loosening up the ludoscope shows up those missing skyboxes and, here and there, the odd untextured AFV surface, but fail to do it and you won't fully appreciate Matrix's cartographic craftsmanship; you may even wind up wondering whether the switch to 3D wasn't all a huge waste of time. 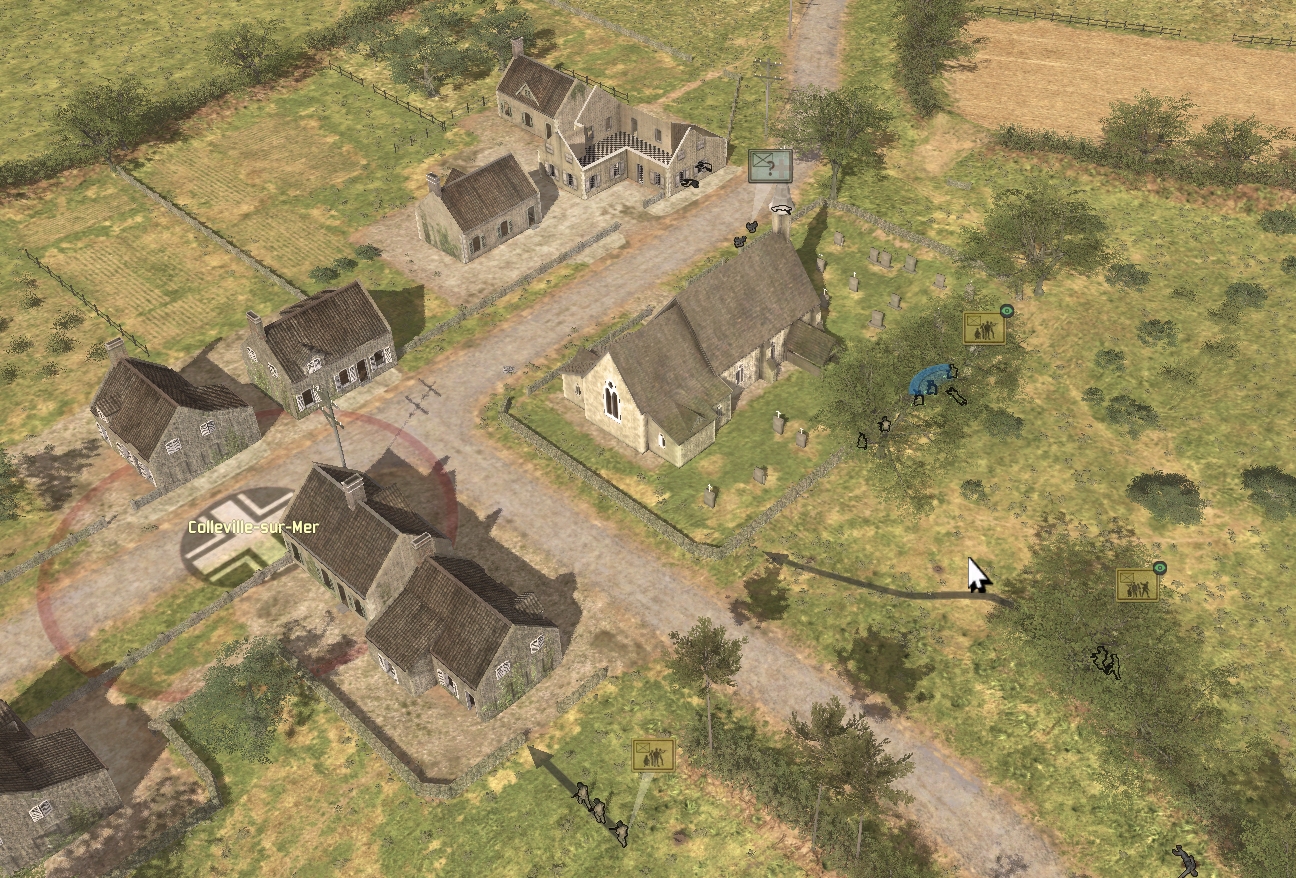 While I'd like to have seen landscapes draped with richer, more saturated textures, and dotted with a few exploitable multi-storey structures, I love the way the bijou battlefields both capture the character of the places that inspired them, and manage to look quintessentially 'CC' at the same time. Even deprived of appropriate soundtracks (birdsong, rustling leaves, insect and livestock noises...) the majority of the game's 36 maps are pleasing places in which to wage war. Partitioned by thick hedges and winding lanes, and generously sprinkled with hamlets and orchards, the Norman venues, especially so. 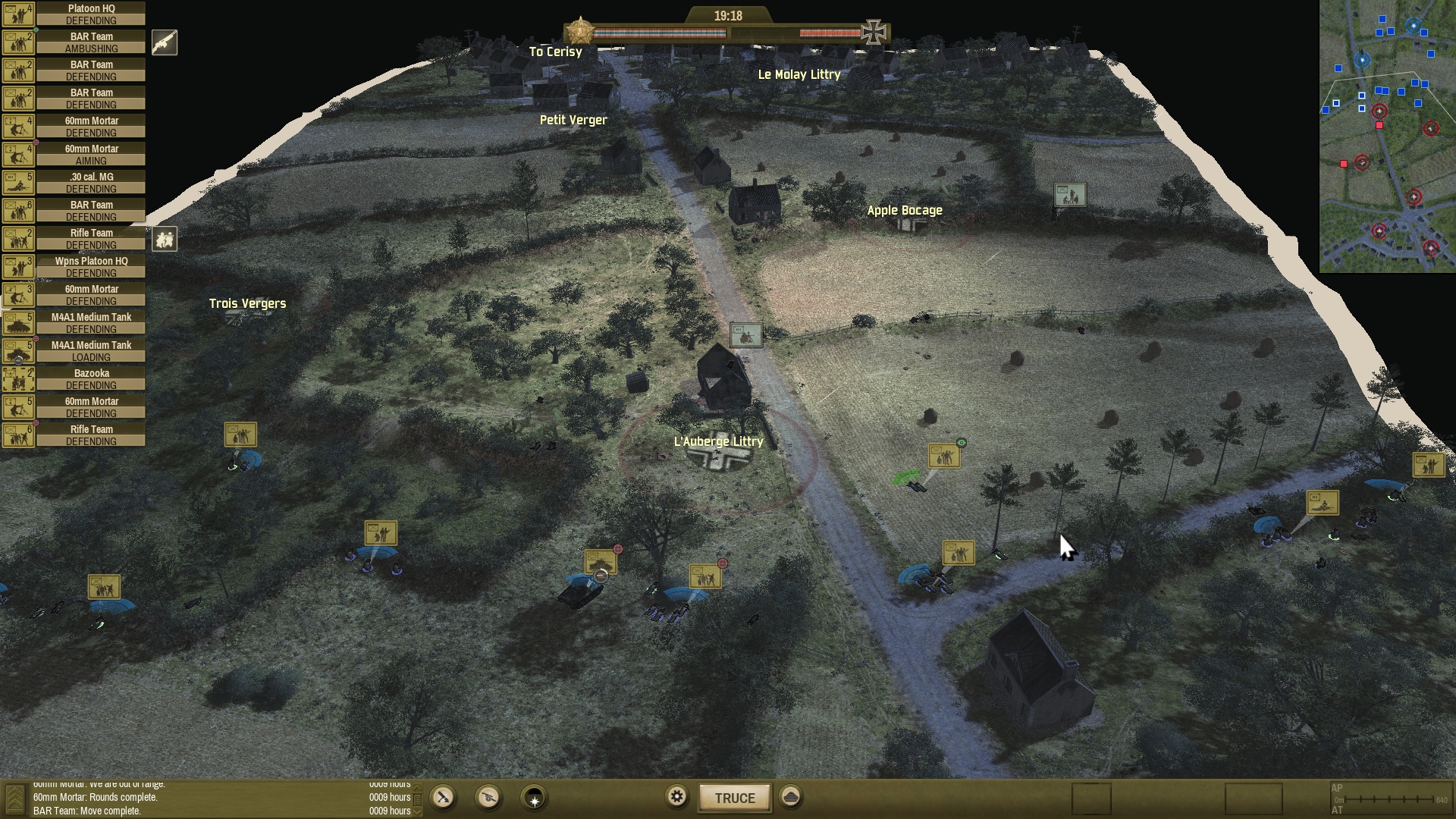 The short sight lines and abundance of cover offered by the bocage play to the strength of an AI which, in defence at least, is perfectly capable of making the player sweat and curse*. Get cocky with your Shermans - fail to use scout teams sensibly, and indirect-fire weapons surgically – and red and orange stripes can start appearing on your team monitor with alarming rapidity. Panzerfausts are surprisingly rare items in the desiccated clash zones of Tunisia; in Normandy, at times, there seems to be one lurking behind every grassy bank and stone wall. 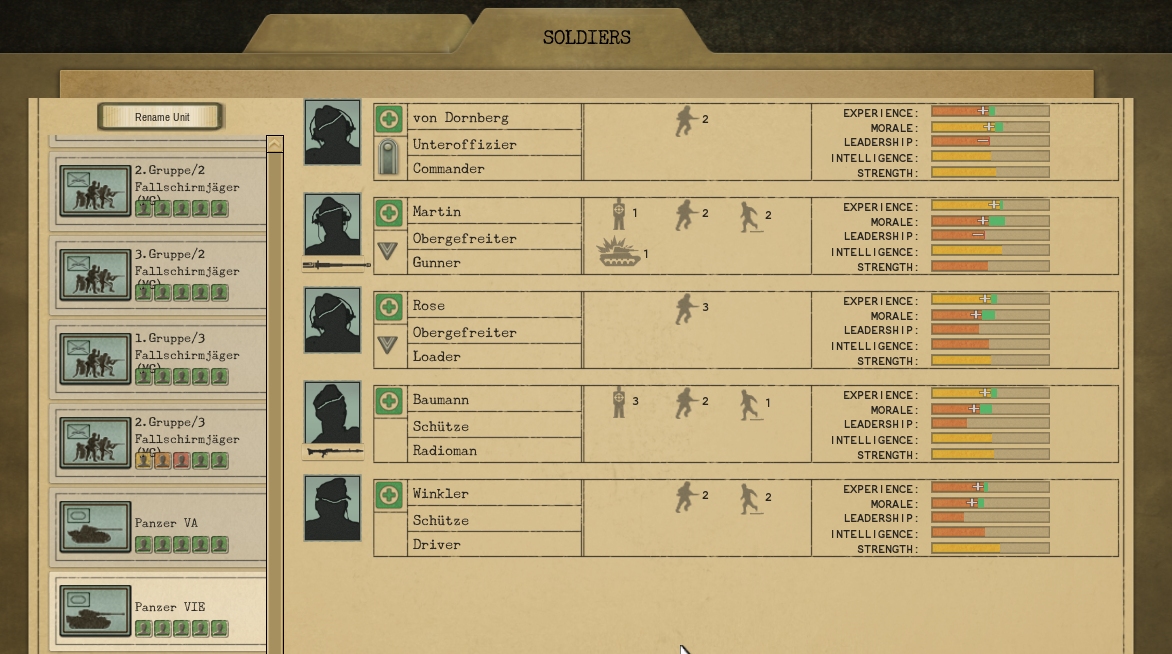 Winning one of the eleven ops, or indeed the entire Tunisia-Italy-France grand campaign, involves battling your way through a sequence of maps using teams and vehicles plucked from a finite pool of units. A particular map may hosts several scraps if fights end without conclusive results. Persistent wrecks and damage, deployment zones determined by final positions, and the knowledge that even a stalemate can deplete the enemy's unit pool and boost the stats of your own, ensure that you never feel like you're simply repeating the same mission over and over again. 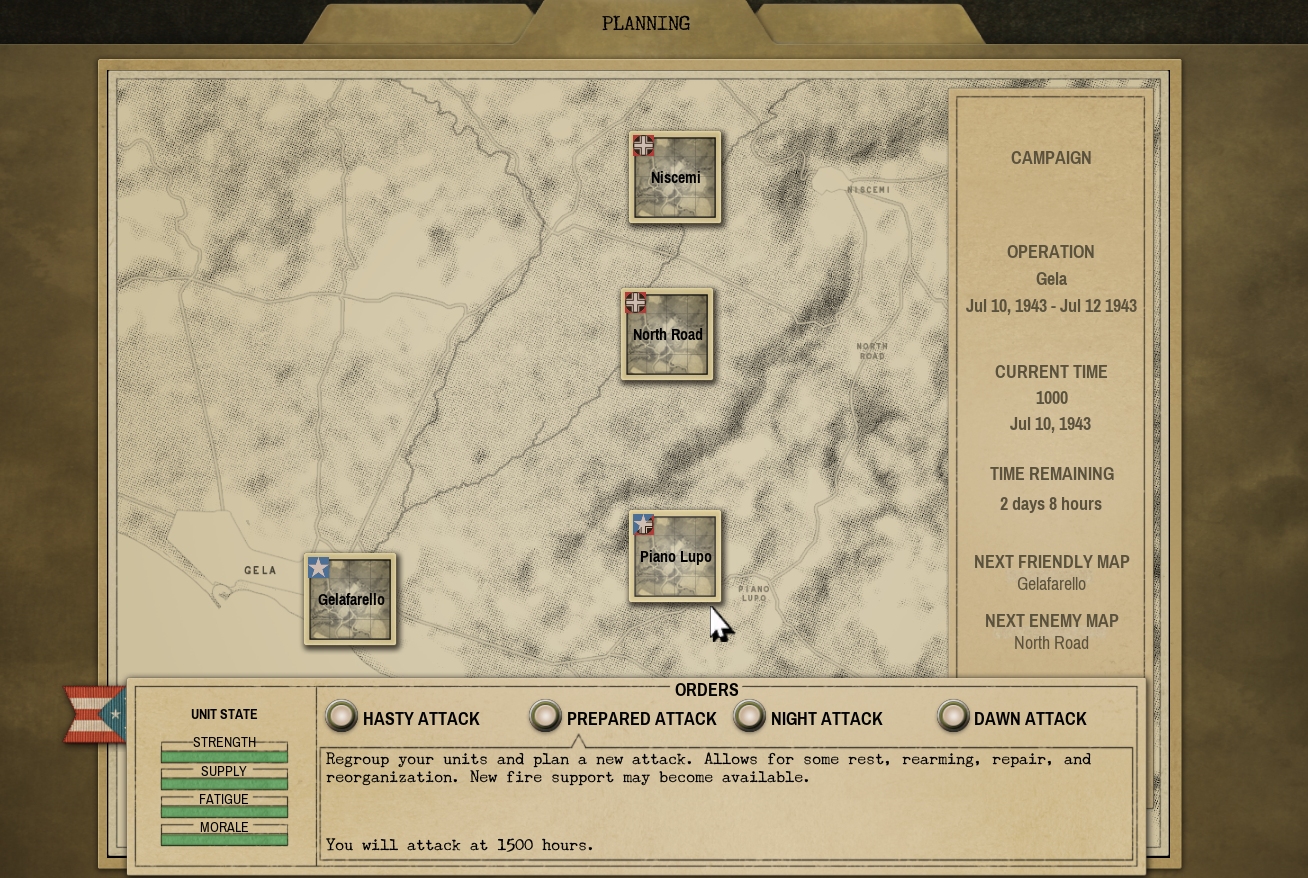 The devs enliven multi-battle games with interesting inter-mission timing choices too. On the offensive, it's up to you to decide whether to rush into the next engagement immediately, or pause in order to lick wounds and replenish strength. As lulls also allow the foe to recover, and bring operation/campaign deadlines closer, they aren't wise in all circumstances. 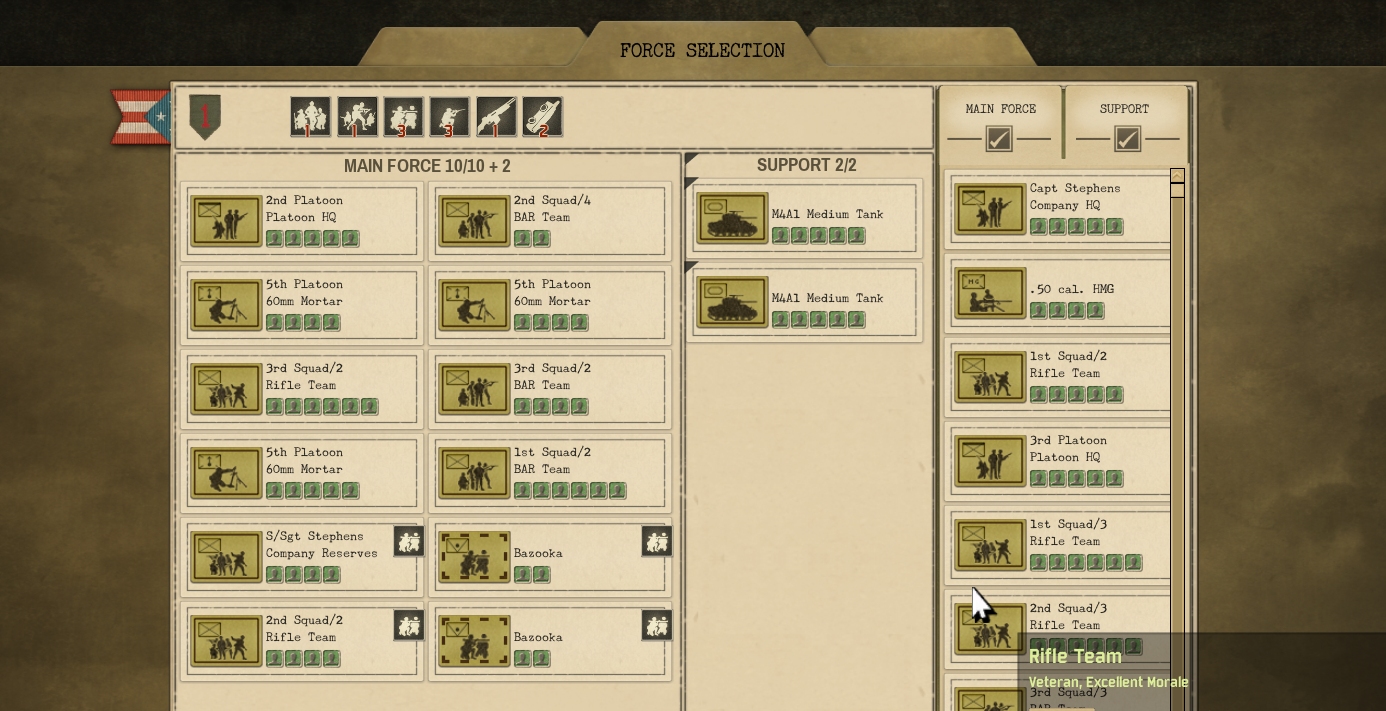 Pre-battle unit selection is given a novel twist via a team splitting mechanic. Commanders have the opportunity to form a limited number of small specialist units – scout and AT teams, snipers and the like – from larger units.

Although the old multi-mode healthbars and unit outlines haven't survived the engine shift, we get compensation in the form of a powerful LoS tool (much improved by a quick tga edit) and some natty icon embellishments which make it easy to see at a glance which units have LoS to particular targets, and how long you'll have to wait before a friendly AFV opens fire with a main gun. Thanks to aids like these, an admirably pithy set of orders, and relatively low unit counts, CCTBF is, like its namesakes, an unusually wieldy wargame.

Okay, this is the point in proceedings where Matrix employees of a sensitive disposition would be wise to stop reading. The compliments stop here, and the sighing and lambasting begins.

Let's get the technical grumbles out of the way first. Every couple of hours or so this week CCTBF has treated me to a big fat Fatal Exception. Possibly more worrying than these disruptive crashes are the more common, brief (one or two seconds) pauses that intermittently freeze fracas. Is the engine struggling with LoS calculations? Quite possibly, given the bizarre behaviour of tanks at present.

Right now the game's AFVs resemble WW2 armoured vehicles in appearance only. The angry accommodation together with its natural enemies, AT guns and bazooka/Panzerfaust toters, are mis-simmed in so many ways, scraps involving them often border on the surreal. Let me illustrate this point with some annotated screenshots. The following images were all taken during the opening clash of Operation Cobra. I was playing as the Big Red One. 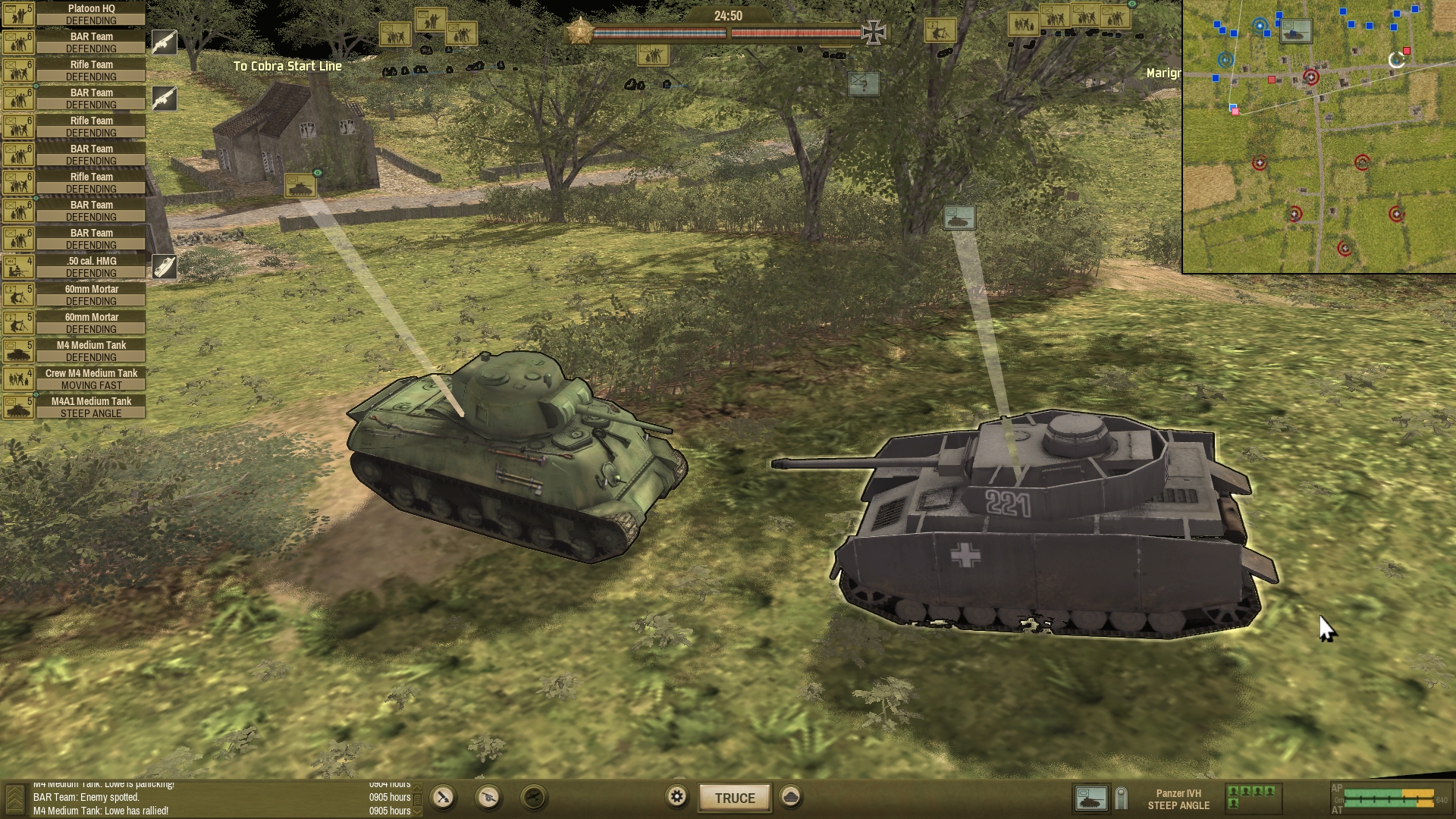 ^ Ludicrous Mexican stand-offs like this aren't uncommon. According to the GUI, the Sherman can't fire because it has a 'bad shot', while the panzer's preposterous passivity is caused by a 'steep angle'. Hmm. 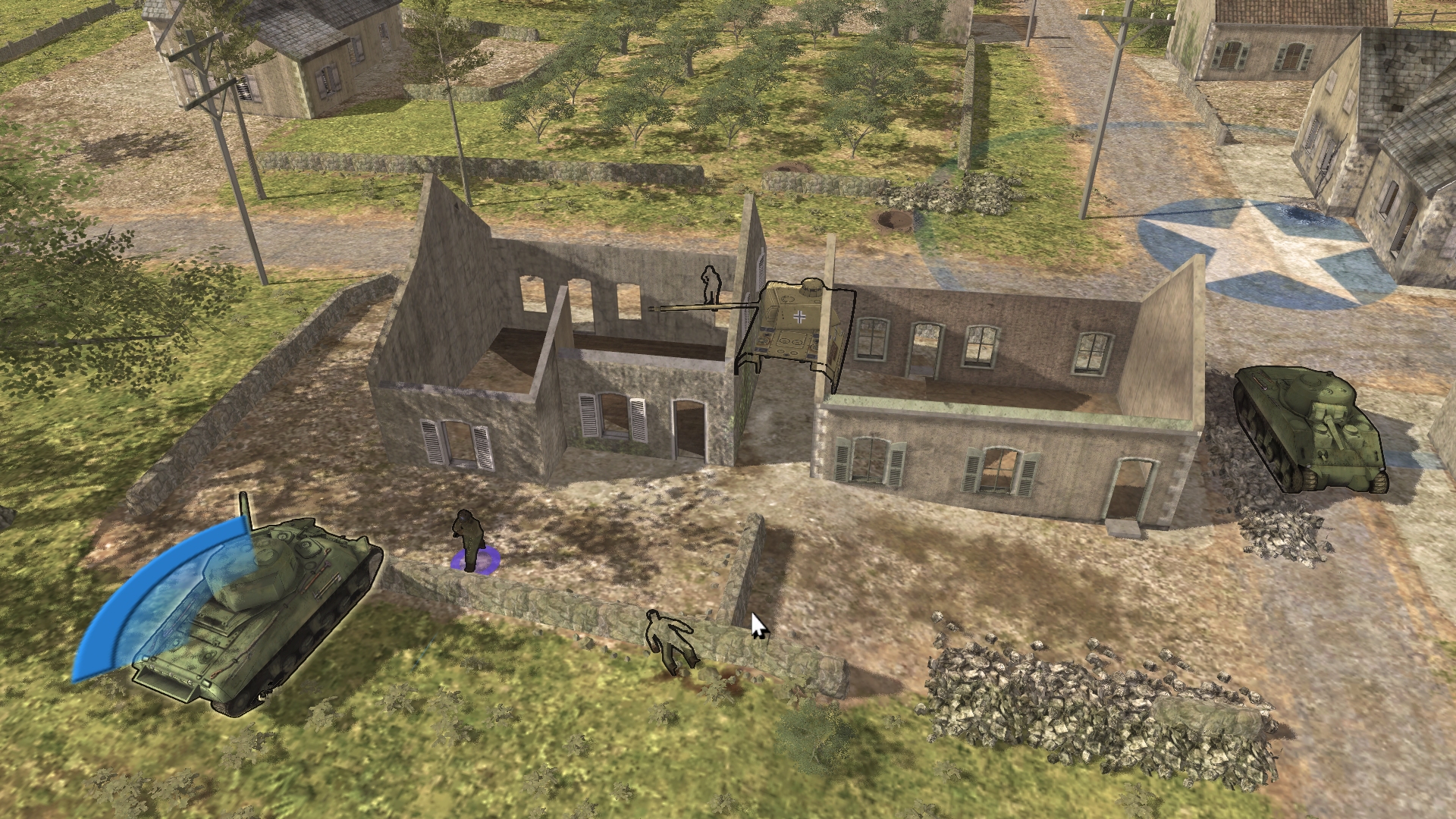 ^ After dancing an absurd do-si-do with the left-hand Sherman, the Panther in the centre has decided to flee down an alley fit only for a Kettenkrad. The impinging walls fail to stop or slow its escape! 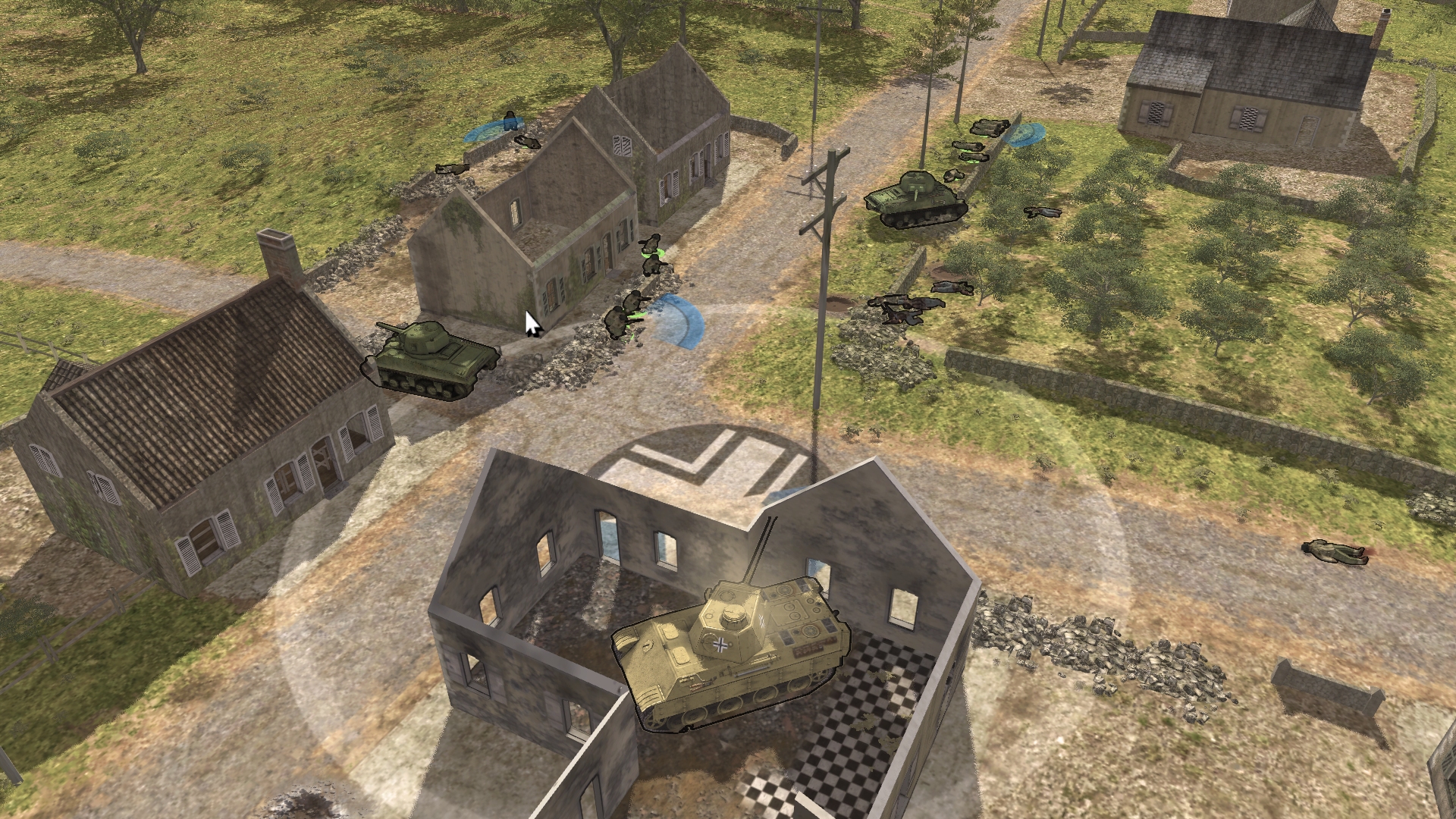 ^ Having acquired a taste for interiors, the Panther then decides to go the whole hog and ghost into the parlour of a nearby abode. Not only are buildings indestructible in CCTBF, it appears some of them are also panzer-permeable. 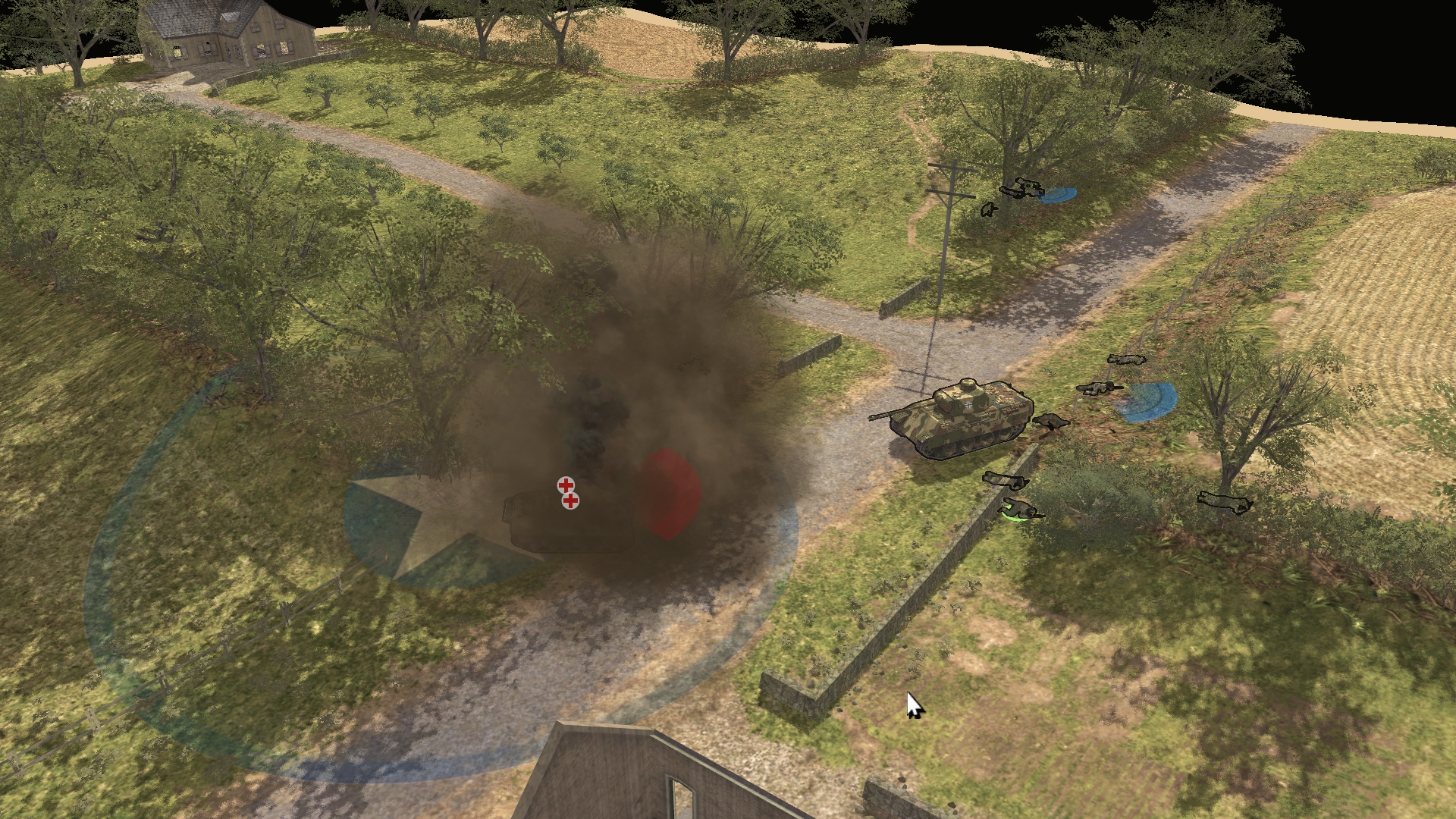 ^ Further down the road, another Panther clearly has eyes in the back of its head/turret and top-secret experimental transmission under its carapace. Not only does it spot the Sherman that's slyly stalking it the second the M4 rounds the corner, it manages to turn in the blink of an eye and get off the first shot. Give me strength! 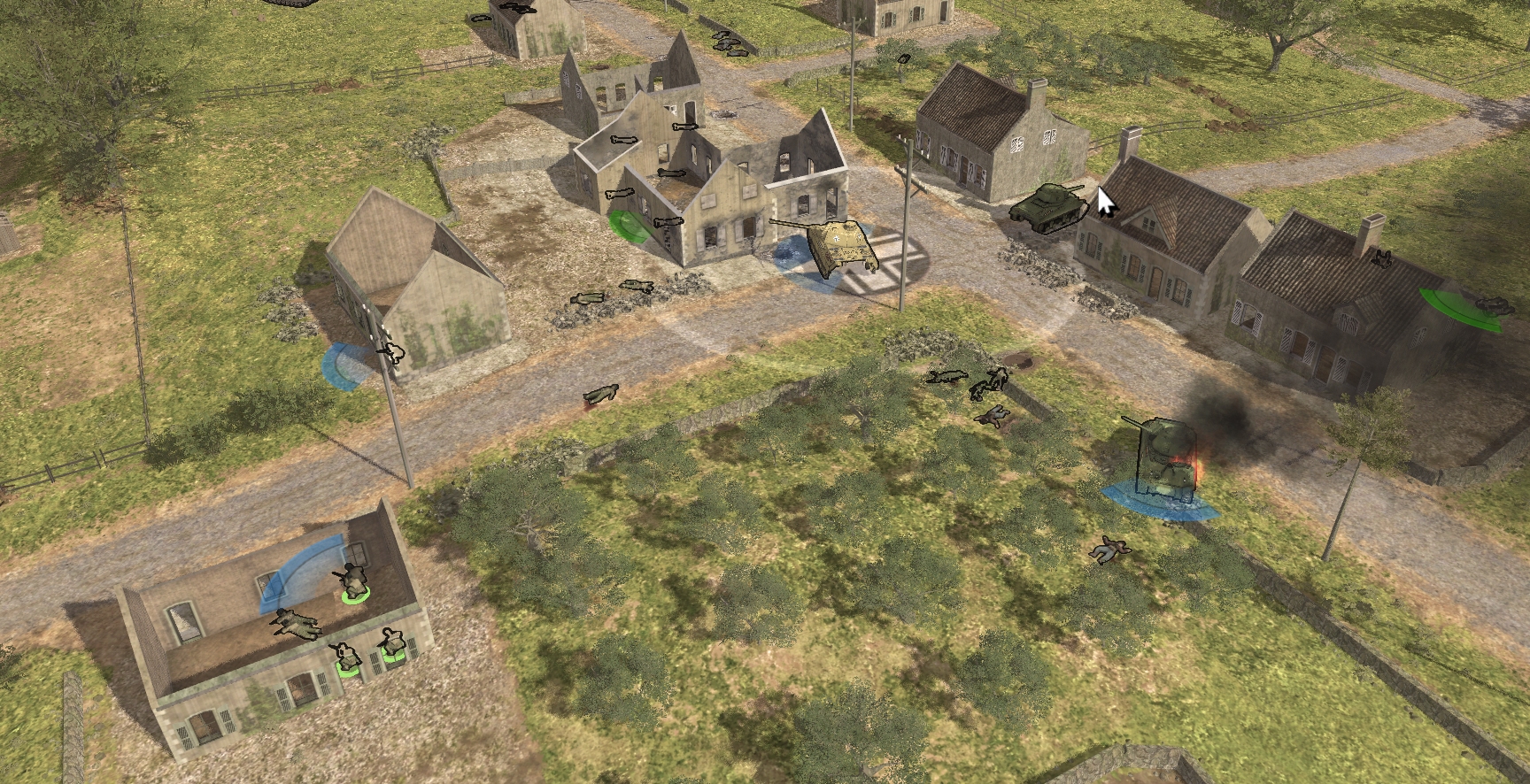 ^ There's something tragicomic about the way this German tank keeps returning to the junction VL. Every time it heads off to do something else, the VL automatically flips (I've an 'ambushing' infantry team parked nearby) and the mystified, dutiful Panther retraces its steps. 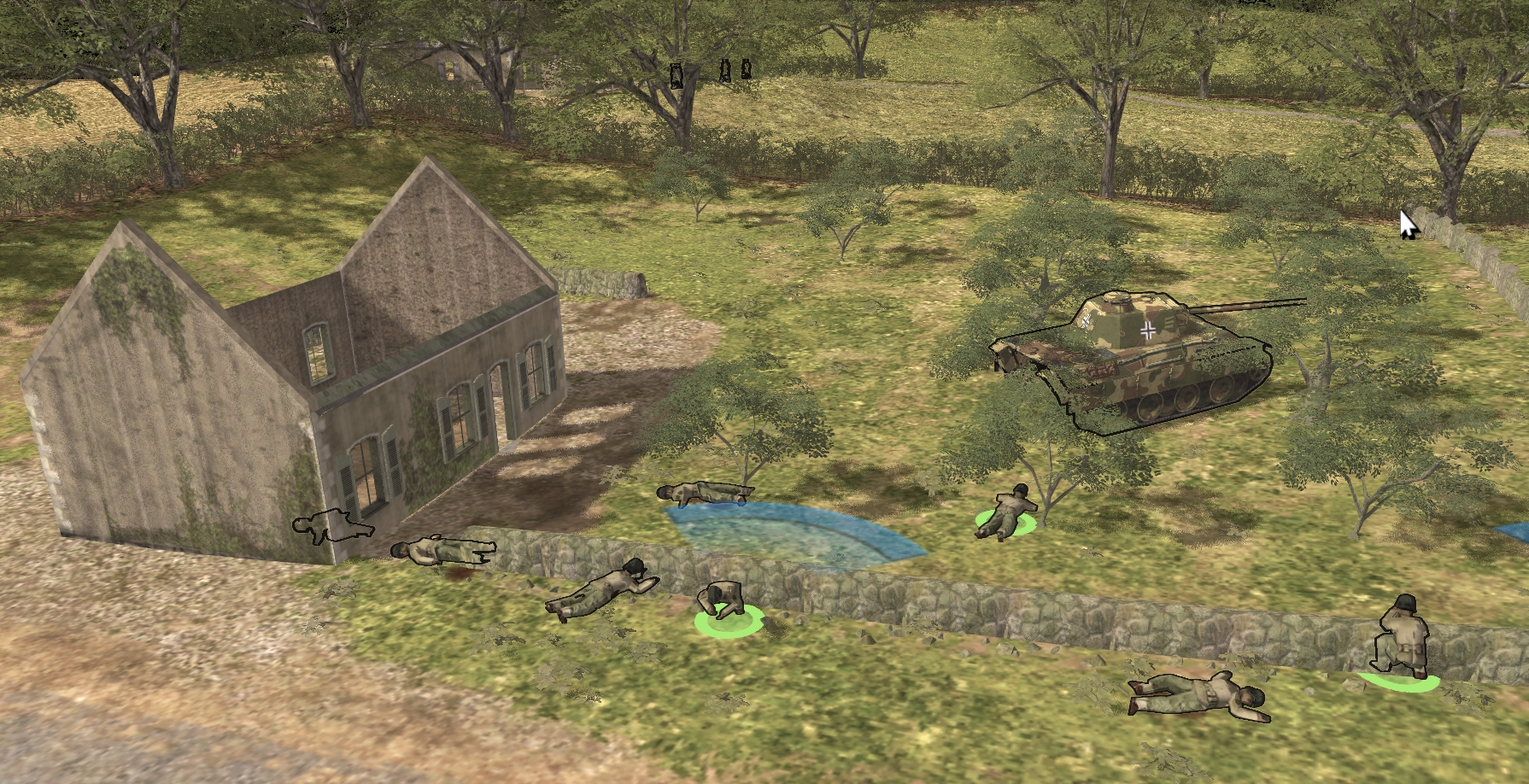 ^ Tanks don't have the monopoly on idiocy. Mortars that refuse to target open-topped AFVs (“The armour's too thick!”), routers who flee towards the nearest threat... I believe I've even witnessed an example of completely inexplicable/inexcusable friendly fire. There's immersion impairers almost everywhere you look. This snap shows three of my men who managed to get themselves run over by a tank while I was busy elsewhere. In terms of vehicle avoidance, the infantry in arcade whimsy Crab Simulator 2014 had more sense than CCTBF's crunchies, and I can't code for toffee. 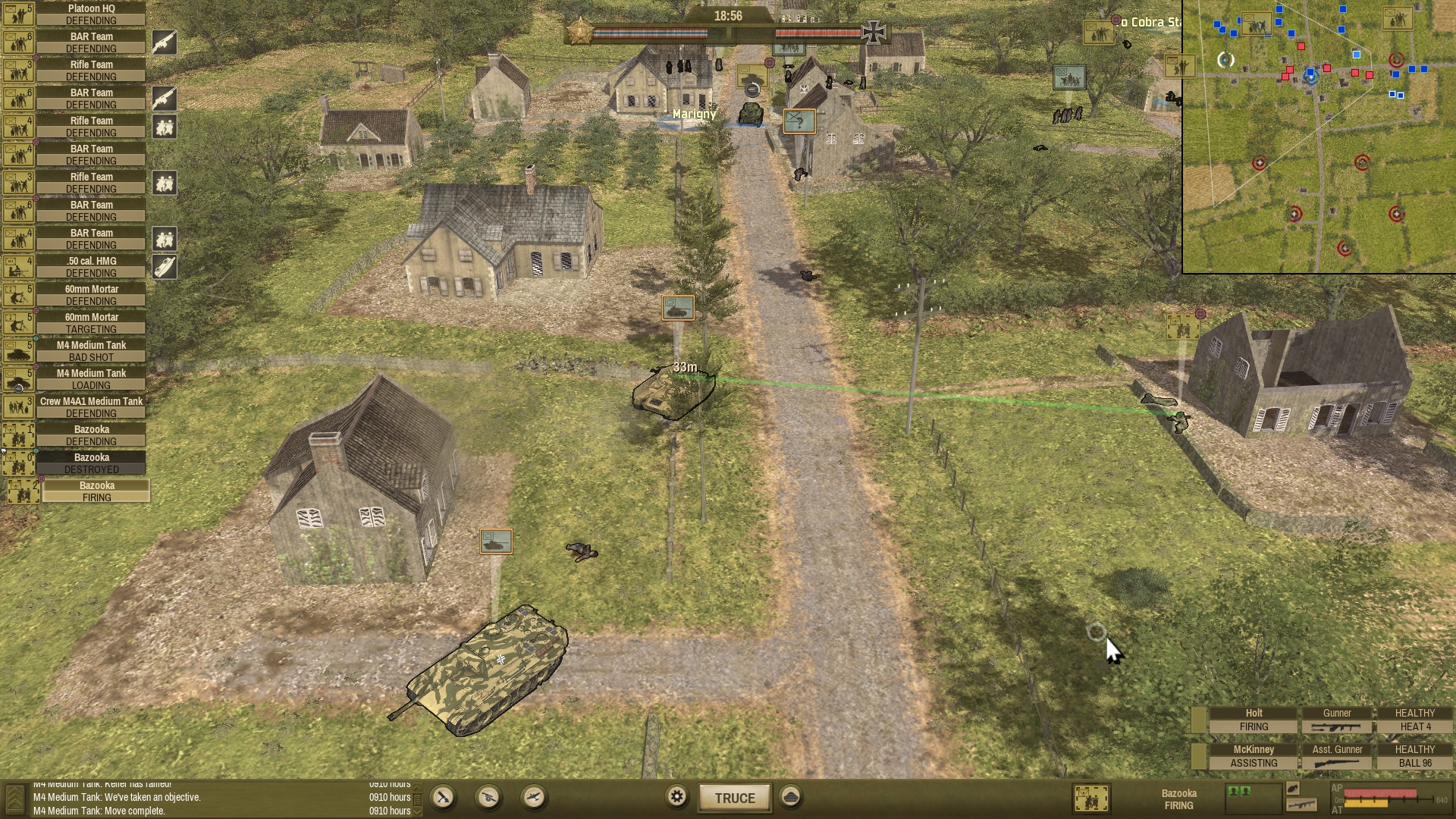 ^ After some tense manoeuvring, my bazooka team is within 50 metres of two tempting targets. Demonstrating staggering incompetence/luck, the anti-tankists fire all five of their rockets without scoring a single hit or attracting return fire. Far too often exchanges involving large calibre weaponry feel like lotteries. 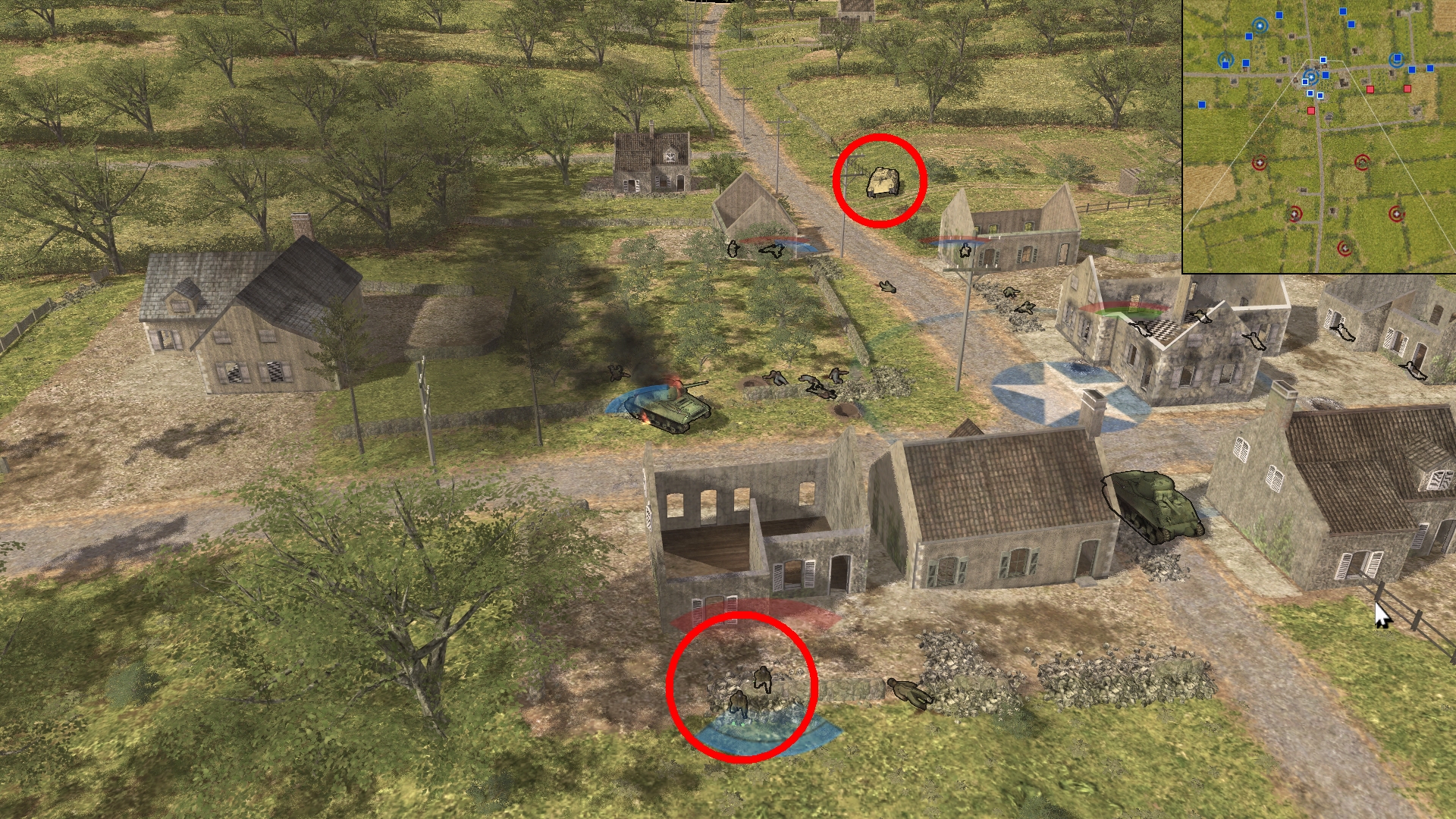 ^ I'm uncertain whether this is an example of suspicious tanky omniscience or merely the game's incredibly subtle LOS simulation. My tank crewmen in the foreground are being fired on by the Panther in the background, despite the intervening cottage. Has the eagle-eyed Panther really legitimately spotted them through those open windows?

A multitude of moments like these caused me to run some 'scientific' LoS and AI tests via the scenario editor and the unexpected results of those tests have left me somewhat troubled. The fact is I no longer trust CCTBF's core simulatory mechanics. I have suspicions that, contrary to appearances, the game isn't playing by the long-established non-negotiable rules of the genre.

An example. Deploy two large opposing armoured forces, 350 metres apart on flat open ground in Combat Mission, Graviteam Tactics or 1st Gen CC, and moments after the scenario begins those two forces will spot each other and begin exchanging fire. Counterintuitively, in CCTBF, US tanks placed in that situation fail to spot their opponents even when fired upon. My tests indicate that unsupported tanks are as blind as bats in the game, and infantry operate at the centre of de-facto 200m-radius detection bubbles when it comes to spotting opposing grunts. Infantry will happily fire on targets at longer ranges if those targets have been flushed-out by others ('borg spotting' is instantaneous), but they're unable to discover infantry threats for themselves until those threats have crossed their own completely arbitrary 200m threshold. 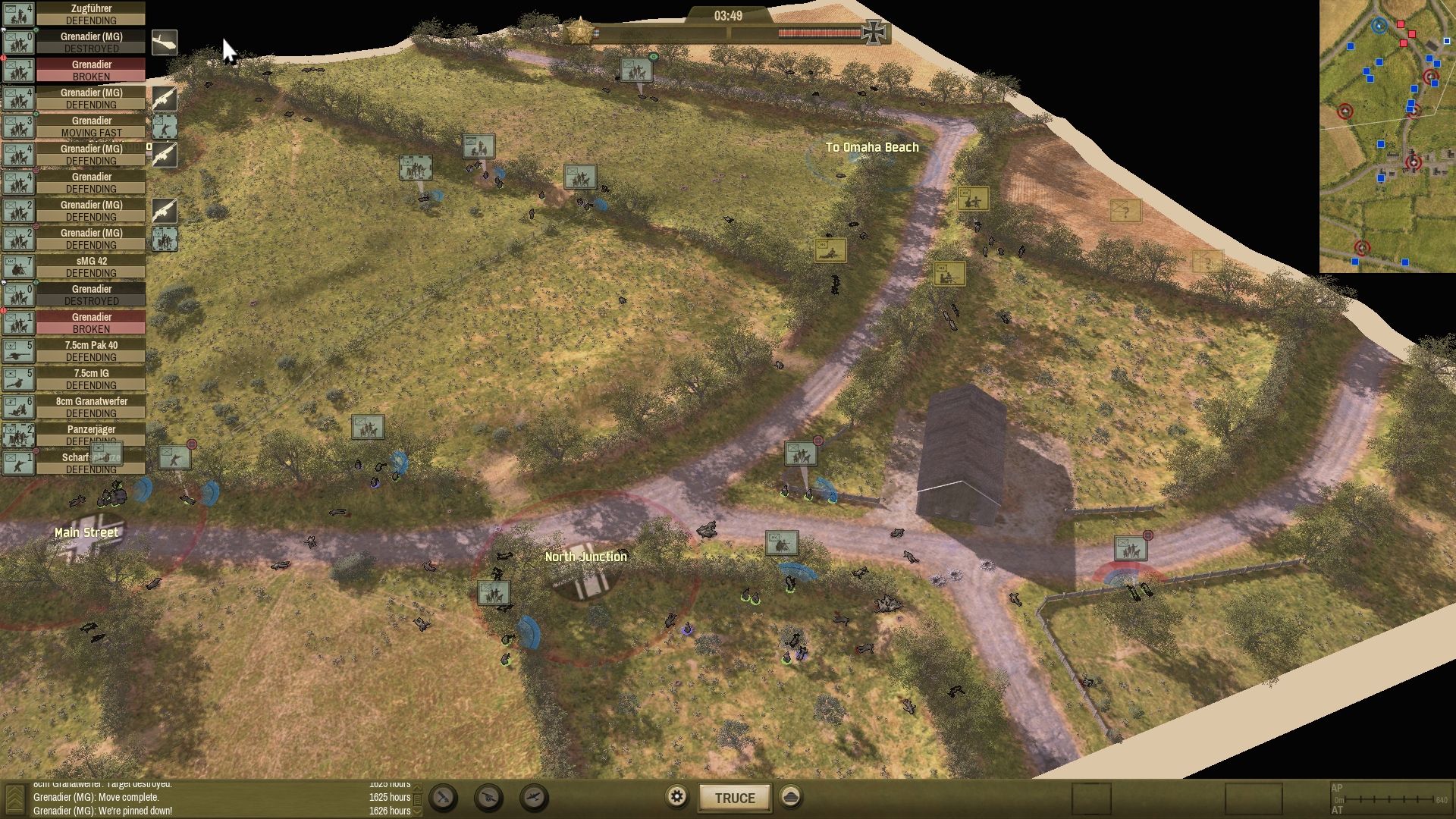 Most maps as so small and crowded that these significant limitations are barely noticeable, but if they are real and the result of some form of performance-prompted fudge, then it doesn't bode well for the newcomer's future. Eastern Front tank duels with T-34s that can't see further than 200m? Hard to picture.

Another oddity observed while fiddling with the scenario editor, suggests that the computer's offensive tactics are dependent on how many units the player opts to field. It doesn't matter whether those units are in or out-of-LoS – the CPU surreptitiously counts/quantifies them and reacts accordingly – strange behaviour for a supposedly non-cheating AI. 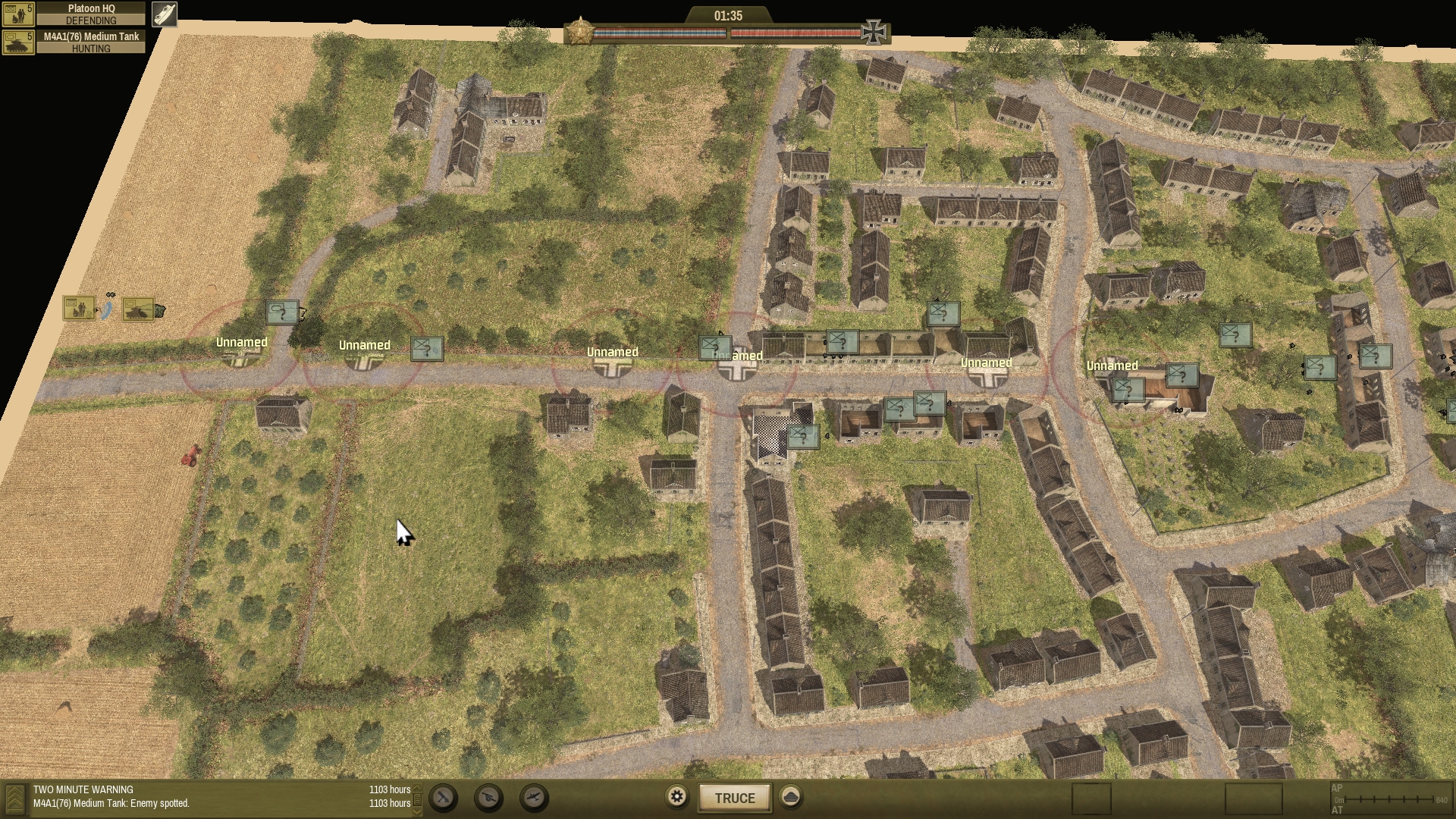 In the test pictured above, the computer-controlled Germans refuse to advance their only tank if I deploy a full force in the hedge screened deployment zone on the left edge, but will do so if I deploy a rump of, say, two units. 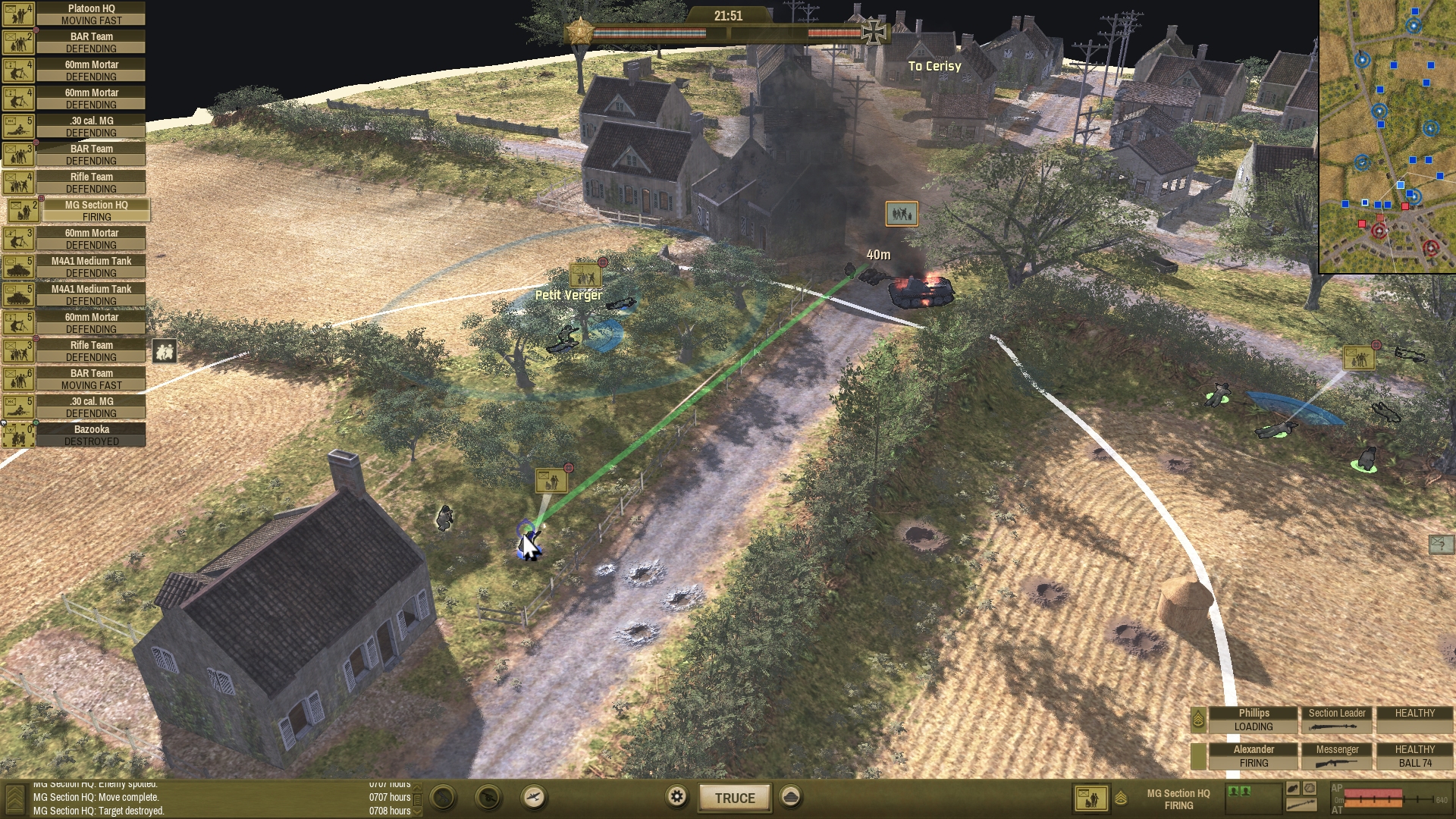 A supernaturally prescient AI might seem like small beer to the non-wargamer, but to me and my kind, added to a disincentives column that already includes things like “Dodgy tank targeting”, “Weak AI”, “Occasional crashes”, and “Detection bubbles” it's a pretty powerful reason to shun Close Combat: The Bloody First for the time being. The game makes a fairly decent fist of infantry combat, comes with some nicely crafted maps, and inherits CC's natural elegance and approachability, but falls short in too many core areas to earn a positive review from someone who has Combat Mission, Graviteam Tactics, and Armored Brigade ready and waiting in his amusement arsenal.

Close Combat: The Bloody First is available now through Matrix Games, GOG, and Steam, priced around £31