Commandos: Behind Enemy Lines turned twenty a couple of weeks ago. My enthusiasm for stealthy team tactics diversions rekindled by the magnificent Shadow Tactics: Blades of the Shogun, I thought it was high time I reacquainted myself with the game that single-handedly established the sub-genre. Is Pyro Studios' debut offering as maddeningly difficult as I remember? Is it still worth playing? Here's wot I think.

The following two sentences aren't unconnected. The interior of my fridge's freezer compartment no longer glitters and my kitchen sink cold tap no longer drips. I've been playing Commandos: Behind Enemy Lines all week. 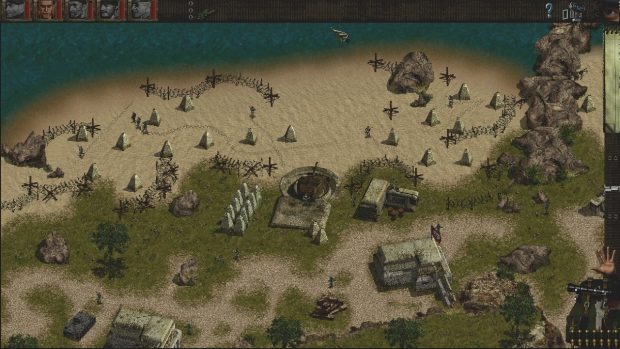 There are various ways of dealing with CBEL fury. I deal with it by doing household chores. After twenty minutes wielding a spanner or a damp cloth I'm usually ready to return to a game that punishes impatience, lack of imagination, and careless quicksaving with the ludological equivalent of a Luger shot to the back of the head. 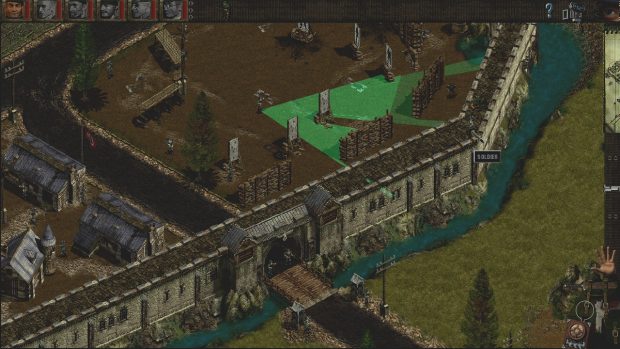 Happily, the rage-quits almost always come at the end of multi-hour sessions of thoroughly absorbing sentry slaying and patrol avoiding. I keep coming back because I know deep-down there must be some way of distracting that guard on the roof of the blockhouse for long enough to knife then carry away the one by the pole barrier; there has to be some ruse or combination of ruses that will finally allow me to paddle the dinghy across the river unobserved. Like tough crosswords or sudokus, the game's intricate military puzzles can look much less intimidating when viewed through fresh rather than tired eyes. And unlike tough crosswords or sudokus, the solution I eventually settle on probably won't look anything like yours. 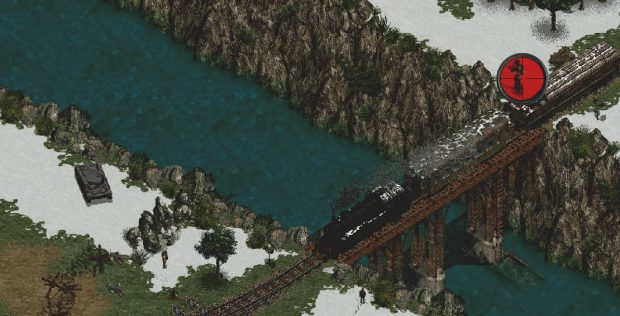 Pyro's singular Sixties-tinged take on WW2 is another reason I'm willing to forgive and forget the inevitable moments of exasperation. Unlike many other mainstream 1939-45 titles, this one doesn't care a fig about Saving Private Ryan. It has cinematic touchstones but they're older and more fanciful. Gonzo Suárez and co. lovingly draw on Where Eagle Dare (1968), The Guns of Navarone (1961), and The Dirty Dozen (1967) for their mission concepts, and, as a result, CBEL abounds with exotic objectives and avoids sanctimonious hand-wringing. 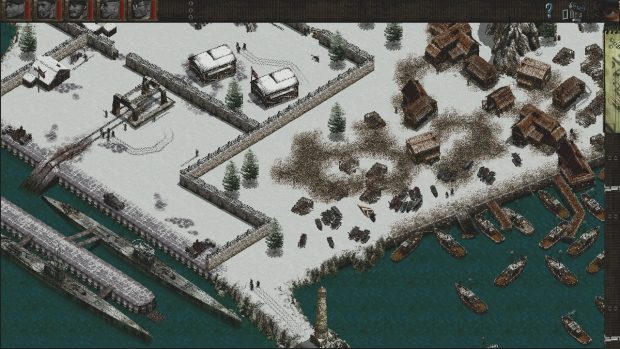 While the studio's talented band of artists and cartographers are destined to be best remembered for their contributions to the sequel, their combined efforts on the 1998 title ensure a good portion of the twenty zoomable-but-single-perspective maps linger long in the memory. My favourite location is probably the cable car-served mountaintop radar station that's the target in “Blind Justice”... 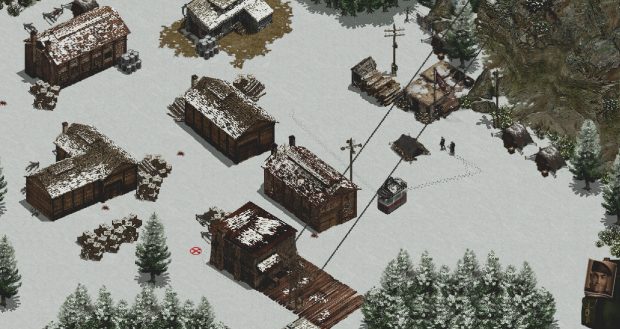 Or the complicated portion of Le Havre dockside that must be negotiated in “David and Goliath” in order to A) steal the minisub and B) sink Bismarck's sister ship... 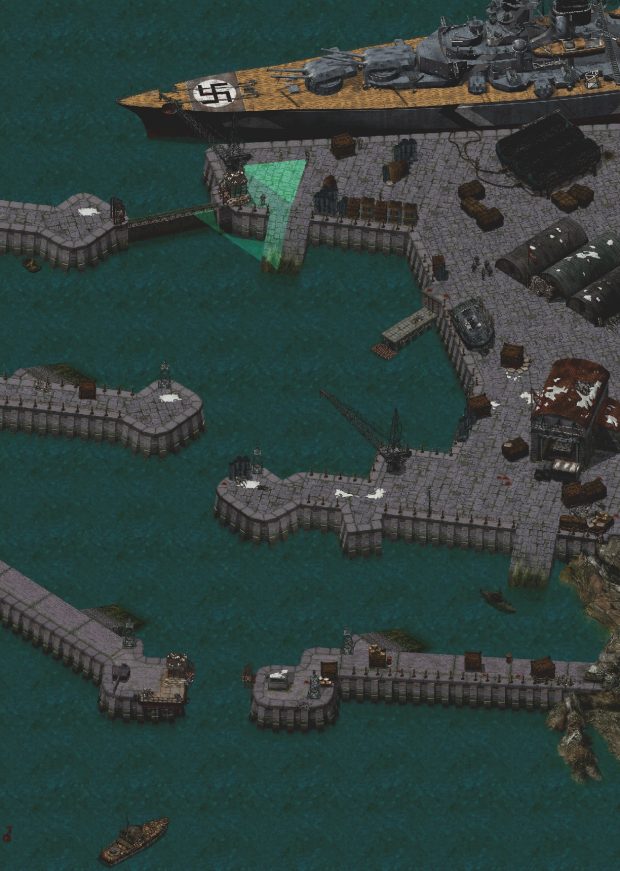 Then again, perusing my screenshot folder I'm reminded of the lovely North African port in “Up On the Roof”... 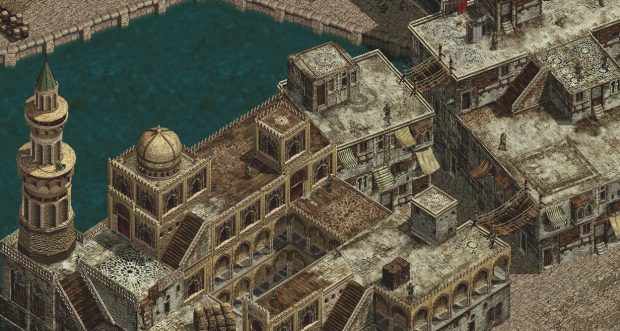 And the ruin-ringed railway gun in “Menace of the Leopold”... 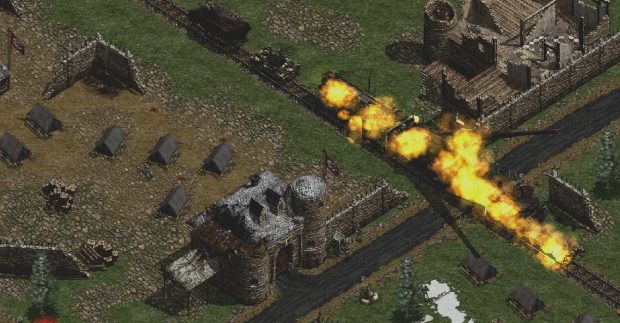 Tempting useable vehicles and static weapons grace many of the maps. After long spells of sneaking and shanking there's sometimes an opportunity to thin remaining opposition a little more speedily and brazenly with the help of a commandeered HMG or AFV. Firm believers in spectacular denouements and stylish exits, the Spanish devs most outrageous outro is probably the one in “Blind Justice”. When the Green Beret and Spy leave the flame-wreathed locus delicti in a stolen autogyro, I guarantee your first thought won't be “How unrealistic!”

Amazingly, considering the amount of work that has gone into making sure the levels look good and play well, CBEL is almost entirely silent when weapons aren't firing or characters aren't muttering their repetitive vocal cues. The lack of mood-enhancing ambient sounds and the very limited/narrow skill sets of the six commandos are arguably the game's most significant shortcomings. 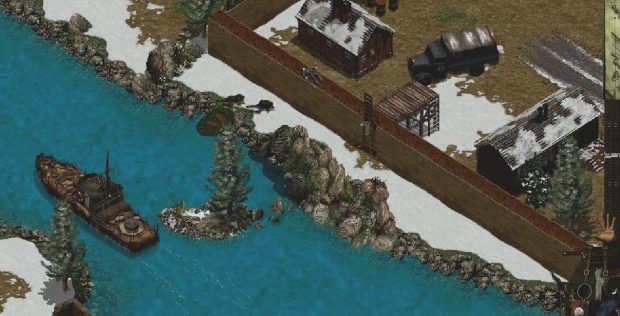 Compared to Mugen's marauders, the Green Beret's band of brothers is, it has to be said, a pretty inept and charmless bunch. I'd forgotten just how slim and rigid each team member's skill repertoire was. 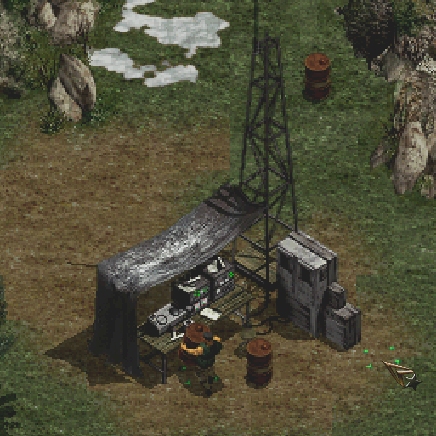 With his ability to divert using a radio decoy, kill with knife or pistol, carry corpses and barrels, bury himself and climb certain cliffs and walls, Tiny, the Green Beret, is by far your most useful and accomplished asset. The others - the Sapper (mantraps, grenades, and timebombs), the Diver (speargun, aqualung, inflatable boat) the Sniper (sniper rifle, first aid kit) the Spy (disguises, poison syringe, first aid kit) and the Driver (vehicles, submachine gun, first aid kit) - while rarely idle for entire outings struggle to get out from under Tiny's big shadow. 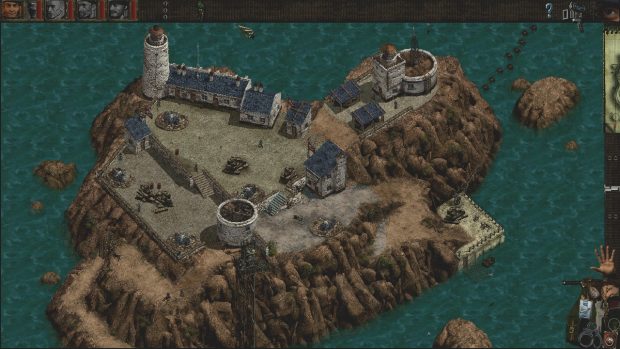 Come to CBEL after time in the company of Shadow Tactics, Desperados and Commandos 2 and the lack of diversionary and non-lethal tools will probably startle. Pyro clearly realised they'd missed a trick because in Beyond the Call of Duty, the excellent eight-mission add-on, they added a wealth of new distraction techniques (stone, cigarette packet, lipstick...) and equipment (blackjack, chloroform, handcuffs). Distributed throughout the team, these extra options make for much more varied antics and a much more even division of labour. In Beyond the Call of Duty you don't instinctively jab '1' at the start of every outing.

Gamers backtracking through the genre will also need to adjust to the lack of action coordination aids. Want the Driver to open fire on that patrol with his SMG the second the Sapper's grenade detonates in the MG nest and the Sniper fells the watcher on the clifftop? You'll need to switch operative preternaturally swiftly and have a steady hand and good memory for hotkeys as there's no system for executing multiple pre-prepared actions at the same time.

As the death of just one commando automatically ends a mission, and a single poorly concealed corpse can spark a search and an alert (alerts cause garrisons to disgorge extra patrols) there's real encouragement to stick to cloak and dagger tactics, and tidy up as you go. Firearms and grenades come into their own against isolated pockets of resistance out of earshot of garrisons. 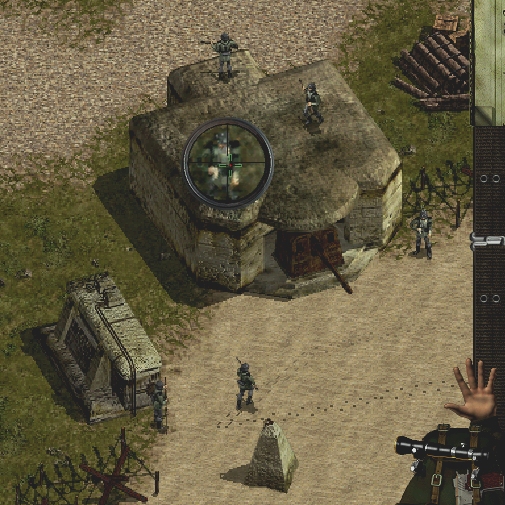 In a nice touch some enemies are more curious than others. Sometimes the wittering of Tiny's invaluable radio decoy will persuade a guard to leave his post and investigate. Sometimes it will merely fasten his gaze. Pyro doubtless had reasons for not showing range rings for weapons and devices like the radio, but today it's hard to imagine what those reasons might have been. 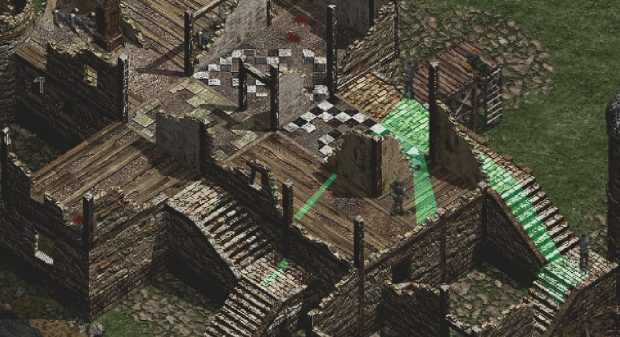 Commandos: Behind Enemy Lines might be relatively crude in parts but playing it today it's bally easy to see why it spent four months at #1 in the game charts in the UK and Germany back in '98.  Generously provisioned with engrossing missions that can be tackled in countless different ways, it will reduce you to scrunch-fisted apoplexy from time to time if you get careless with Ctrl+S or attempt to rush or play when exhausted, but as its sequels and imitators also have that capability, that's no reason for abstinence. Commandos 2, Desperados, and Shadow Tactics are the better titles but I don't regret in the slightest spending a significant chunk of the past seven days studying serpentine patrol routes, eyeing swinging vision cones, and clicking unsuspecting sentries with a knife-shaped cursor. 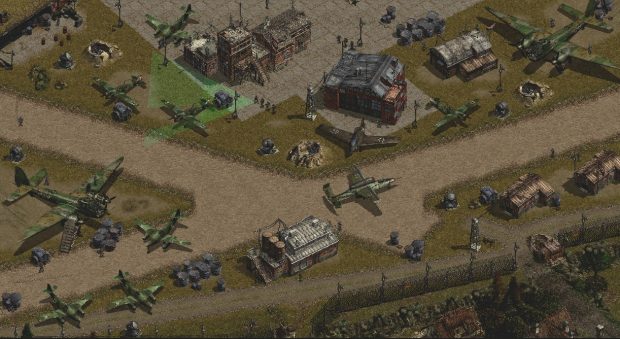