Crossing Souls gets off to such a great start. It immediately looks vividly beautiful, a gorgeous splash of pixels and colour, incredibly detailed scenes that would only look less elaborate, less refined, if they were depicted in a more updated graphical style. Then it goes head-first into nostalgia-poking happy places, a story of kids starting an adventure on the first day of the impossibly long summer holidays.

Or you could say: Crossing Souls, a game that grows steadily worse the more you play, immediately beginning by ticking off every tropey 1980s reference one by one, as it introduces its stereotypical gang of kids in a cavalcade of ‘80s movie clichés, grabbing hold of the very tip of Stranger Things’ coattails.

It would very much depend upon how cynical you were feeling. Both are true. 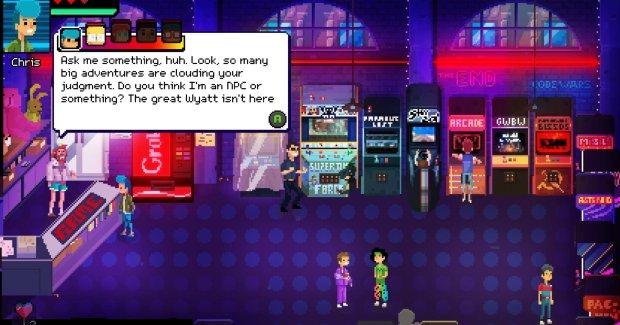 In Crossing Souls you play as a group of five kids, who are, in order:

Chris: the everykid, a generic entry-point.
Matthew: the nerd, thus possessing scientific genius.
Big Joe: the fat black kid, who is fat, and the one who is not white.
Charlie: the girl, poor, infectiously plucky and just as good as any boy.
Kevin: Chris’s little brother, always getting in trouble.

It’s quite clear that this boilerplate collection is very deliberate, because Crossing Souls is about rejoicing in the nostalgia of those sub-Spielberg/Stephen King movies of impossibly inventive and adventurous kids falling into peculiar tales of mystery and magic.

Things begin with you playing the blue-haired Chris, the unopposed leader of the gang, and your first task is to find the other four members to join you. Matthew’s doing science experiments with his scientist parents, Joe is doing chores for his mom, Charlie is - inevitably - trying to avoid her drunk father in the trailer park in which she lives, and Kevin is at the gang’s tree house in the woods, having discovered - wait for it - a dead body nearby.

So tick off every movie ever, and Stand By Me. And on the dead body is… a mystical floating jewel. (What I believe those in the know call a “Phlebotinum”.) A jewel that allows the kids to see… the dead. Ace.

From here on in the first half of the game is a mix of vague platforming, a few simple puzzles, and some rudimentary combat. Each is approached by switching between which of the kids you’re currently controlling, each with their own abilities. Chris is a good all-rounder, and can climb, but has weak health. Matthew can hover above the ground for a bit, because, er, science. Joe packs a punch, and has extra health, can move heavy objects, but is slow-moving. Charlie is, er, the same as Chris but can’t jump. And Kevin is a pain in the arse.

The result of this was probably intended to be a lot more involved than has appeared in the final game. In the end, it amounts to switching to Chris to climb, Joe to move blocks, and Matt to jump over big gaps. Charlie, rather tellingly, is entirely superfluous. There’s never any mystery to who can best solve what - it’s just a case of putting the square shape in the square hole each time. 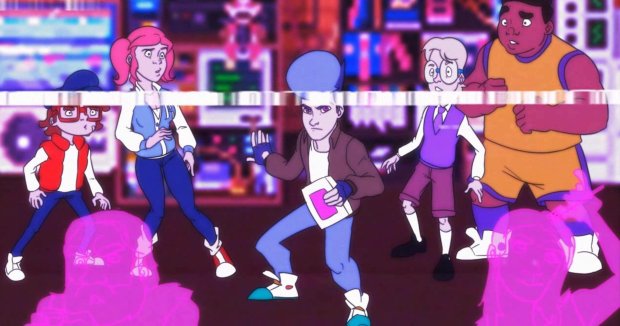 Platforming is, unfortunately, deeply hindered by the chosen perspective. In a manner that might be familiar to those not hypnotised to be incapable of criticism for Hyper Light Drifter, the straight-on view often confuses what’s a path, what’s a wall, what’s a block and what’s a gap. Falling in water often means resetting a hefty way on a longer puzzle, but it’s often incredibly ambiguous what is water, let alone whether something is the wall or the floor. Take this scene, for example 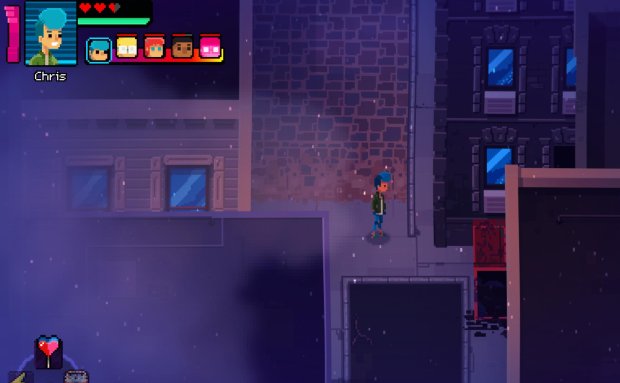 That seemingly brick wall in the middle back is in fact the path out of the scene, and the apparent concealed alleyway to his left is in fact solid wall. Is that bit at the bottom a path, or some water? Walk on it to find out. That’s a whatever in a scene like this one, but when you’re trying to time jumps between disappearing blocks, with already clumsy platforming, such ambiguity can be infuriating.

Combat is similarly average. For the most part you’re hitting rats and spiders, and you can do it barely looking at the screen. Occasionally this is punctuated with a boss fight, nearly all far too easy, just a case of chipping away until they’re over, with little to no imagination required. Of course the game's final fight is a ludicrously difficult, mad spike, killing you dead in a single hit, and then making you sit through a cutscene and pre-fight each time. Combat’s there in the first half to add more dimension to a very story-led game, but doesn’t really amount to much. By the second half, when they've seemingly given up with the adventure and exploration, its mediocrity begins to dominate.

The largest problem however, is despite the wonderful presentation, the gleeful vibe, and all the nostalgic elements seemingly in place for an indie classic, well, the story just isn’t very good. The farther you get, the more unwieldy and inane it becomes. What begins feeling like a pleasingly silly supernatural ‘80s TV movie far too quickly becomes a jumble of every imaginable idea all thrown into an unstructured muddle.

This is so significant an issue for Crossing Souls because it’s really the story that would have held its disparate parts together, forgiven the weakness of the platforming, or the mediocrity of the combat. They’d have been distractions along the way, as with Night In The Woods, where you ploughed through in order to hear the next witty lines, or see where the tale turned.

(The game also repeats what's rapidly becoming its own trope, since Far Cry 3: Blood Dragon, of conflating 1980s Saturday morning cartoons with straight-to-video action for adults. So you get the video-taped cutesy cartoon sections, interspersed with ultra-violence and effing and blinding. How did this become a thing?)

Of course, if you find yourself screaming in rib-exploding hilarity every time a comedian says, “DO YOU REMEMBER THE GOONIES?!!?” then you’ll inevitably enjoy the constant references to movies and TV of the decade. If you want a bit more than someone reading out a list of things you've heard of, it doesn’t reach that far. This isn’t satire, or lampooning, but simply referencing. Being like it.

Referencing excuses many a thing, but your mileage may vary with the cod-Red-Indian dialect of ghostly Native Americans (“Bah! He have fun, shout with joy. My father do same to me, on top of bear,”), or representations of trailer parks as being populated by toothless hicks all related to one another. To me it just feels tired, rather than anything else.

And yes, The Girl One is a trope of the era, but it would have been nice if Charlie could have had, you know, any reason to exist in the game at all. She’s there to be drooled over by Chris, and while playable, only as a slightly less capable version of the same. And naturally is damselled at various points.

Toward the end, however, it really goes out of its way to find new ways to be poor. A gruesomely incongruous and tiresome bullet-hell-ish arcade sequence makes no sense in the game, and doesn’t have the sense to offer a skip for anyone who thought they were playing a calm adventure game with occasional platforming sections. It is, in fact, a warning that the game's about to suddenly and clumsily shift genres, into an action platformer it is in no way good enough to support.

Then the platforming becomes morbidly bad, asking you to rapidly switch back and forth between characters in between timed jumps on disappearing platforms using a limited energy pool while dodging roaming searchlights, with any tiny slip-up putting you back to the start. That's bad enough with its slippy, laggy controls, but unacceptable when it then starts glitching, madly teleporting your character from the platform they landed on to another one with the searchlight over it. Good grief. Shortly after this, a command prompt to open a non-existent door became stuck on my screen, making everything bemusing.

It begins to string together these broken sections without good checkpoints, meaning its bugging out at any point can punish you by having to replay the lot of them. A galling prospect when the game just isn’t up to platforming in the first place. It becomes utterly farcical, where twenty minutes of dreadful, glitchy, timed platforming has to be replayed over and over because of one mistake, whether by you or the game.

This ghastly section all culminates in an extended timed platforming sequence of such magnificent awfulness that it only induces a dull depression. It is a fight between you and the game’s god-awful controls, ridiculous perspective, ability to glitch, and most especially, its ignoring crucial button presses. There’s no forgiveness within these limits, no notion of its own astoundingly limiting shortfalls, creating a sequence of utter misery and tedium. 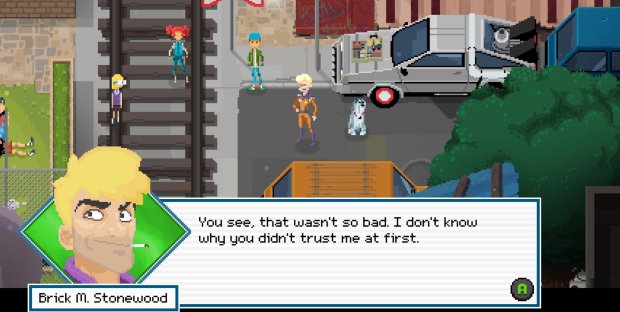 Crossing Souls desperately needed some brutal editing, cutting out vast sections that patently obviously just didn't work, that its design just couldn't support. It out-stays its welcome to the degree where I found it a chore to keep playing. Which is such a shame after the promising - if hackneyed - opening. It suggested a gentle game of exploration and adventure with a band of kids, by, er, being that for many hours. And then suddenly it isn't, and what remains are all the worst parts of the first half screamed through a broken megaphone.

In the end, the relationships between the children could have saved it all, but they're just non-existent. It relies entirely on your nodding at the archetype and just agreeing that's enough, and it clearly isn't. The reliance on reading off a list of films and TV shows you saw in the 80s (and somewhat confusingly, often the 90s too) inducing a state of nostalgic bliss might work for some, but not for me. I wanted this game to do some heavy lifting too. That it ultimately collapses into a string of unpleasant platforming sequences that the core design simply can't sustain means I grew to loathe Crossing Souls, once it entirely abandoned its redeeming features for everything it couldn't get right.

Crossing Souls is out today on Windows, Mac and Linux, via Steam