If you click on a link and make a purchase we may receive a small commission. Read our editorial policy.
Developer: Ubisoft Paris
Publisher: Ubisoft

As I flew our helicopter towards yet another near-identical slice of Ghost Recon Breakpoint’s drone-infested, “libertarian utopia” turned hellhole, RPS vidbud Matthew pointed out something much more interesting than anything in the game.

There was a time, he observed, when Breakpoint’s vast, meticulously-crafted jungles and mountains would have been gob-smacking. We’d have rejoiced in the possibilities offered by a seamless open world, merrily meandering between repetitive and listless shootouts. We’d enthuse about that time our car got improbably stuck on a mountain, or the fleeting moments when the clumsy reality of infiltration brushed up against a spec-ops fantasy. We'd gloss over all the dullness in-between.

The island of Auroa is pretty. This is not in doubt. There are waterfalls to bike under, enticing forest trails, sumptuous beaches. It's got some lovely rain. Despite this, my experience with Breakpoint has been resoundingly mediocre, and has frequently dipped into outright naffness. A big pretty world is not enough, even if you do simulate the fact that its mountains are exhausting to slide down. Especially if you do that.

There's a tension between the realistic grittiness Breakpoint aspires to and its fundamental nature as an open-world muckabout. It takes itself far too seriously, right from the opening cutscene where your helicopter gets downed by robo-bees and blood dribbles across your upside down face. 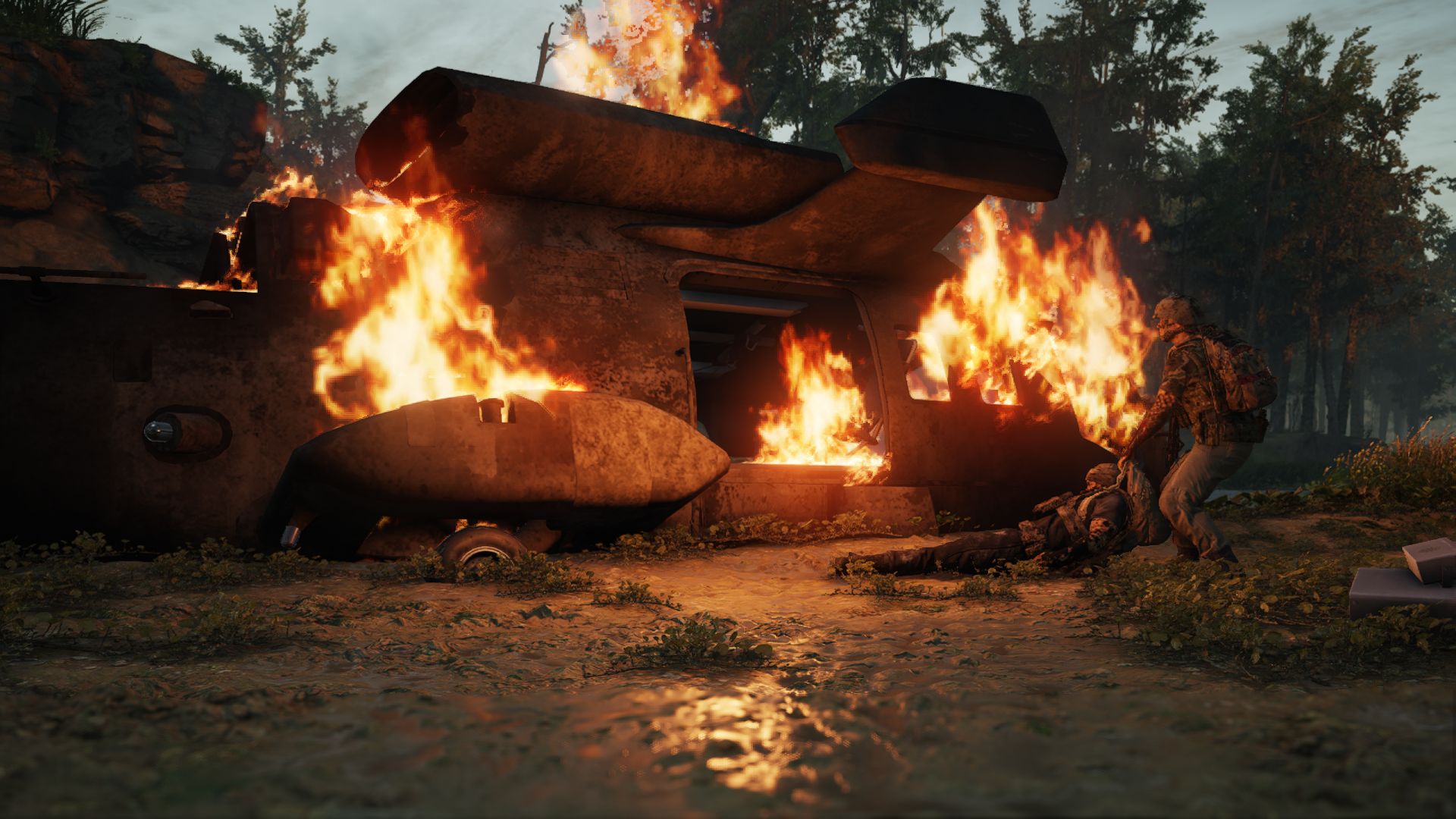 You're in charge of a team sent to figure out why the island has cut off all communication. It's the Punisher's fault, it soon turns out, or rather Jon Bernthal's, playing a villain whose menace occasionally cuts through all the tired military drivel. He has some scary drones, and thinks people that don't assert their dominance are weak. The plot builds towards some utter nonsense where several 'genius' types characterise Transhumanism as "building a computer that's smarter than people". There is a version of this review where I spend the next 1,000 words gnashing about why this is imbecilic, but I'm aware that most people will regard the story as entirely incidental. This is a healthy perspective, but unfortunately the only thing worse than the story is the drudgery of playing through it.

Almost every encounter unfolds the same way. You rock up to a compound, and send out your flying drone. Goons are indicated by red patches on your radar, and the first dozen times that you swoop about tagging enemies will likely feel cathartic. It's like tidying up, only instead of stuffing socks in laundry baskets you're marking people out so you can more easily shoot them in the head. This you'll then do, from a distance if you're sensible, or up close if you've grown tired of that. Again, this will at first be satisfying. Especially if you're with a pal or two, and do countdowns to simultaneous headshots. For all Breakpoint's faults, if your itch for simultaneous multiplayer headshots has grown along with mine, that itch will be scratched. 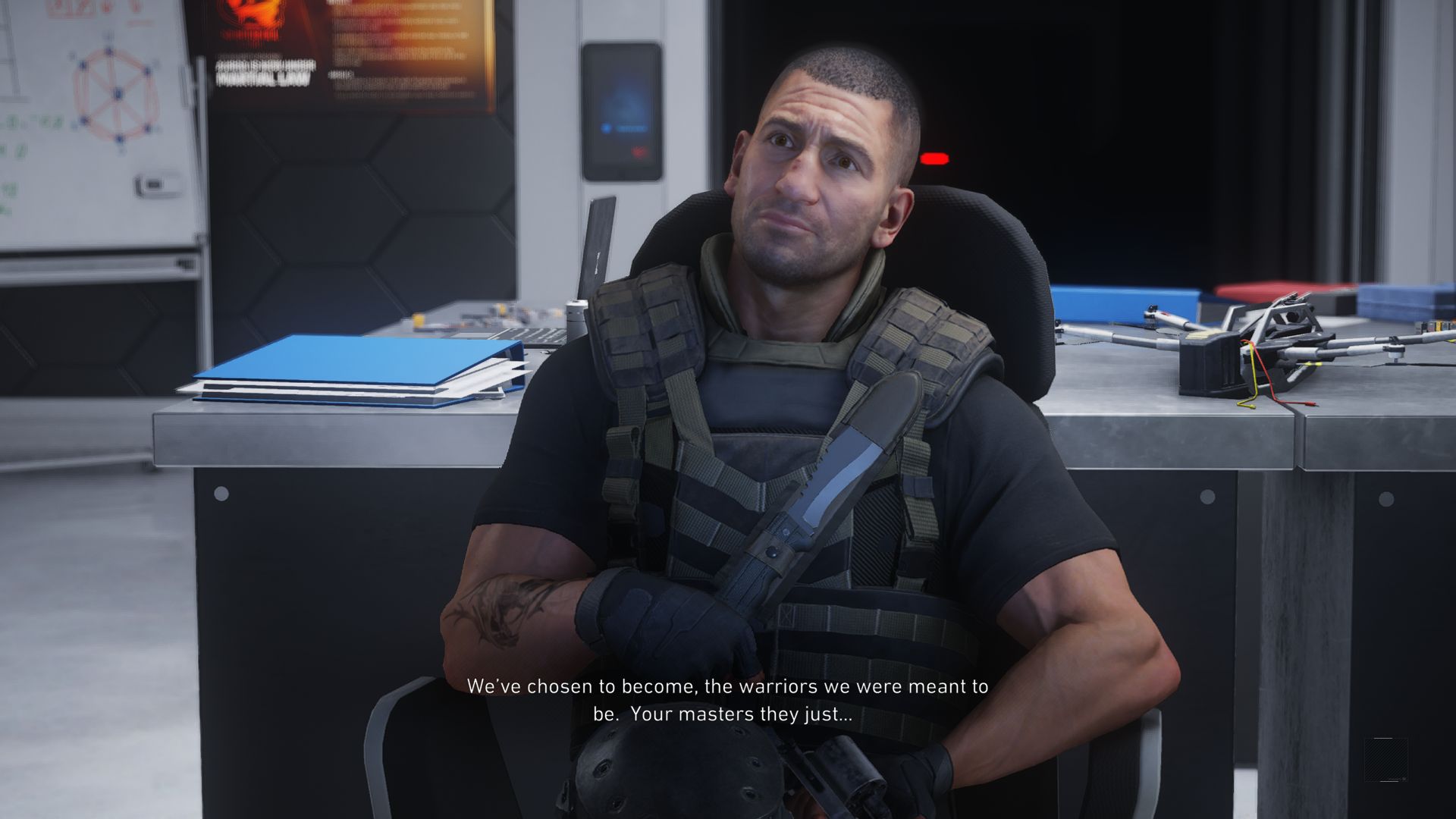 Usually, something will go wrong. (Especially if you're with a pal or two, and keep attempting simultaneous multiplayer headshots.) At this point the spec-ops fantasy breaks down and you pick your way through people and robo-cars as they file towards you. Enemies have much more health once they're alerted, and this kind of sucks. Headshots still kill instantly, but in the heat of a fight you'll find yourself dribbling bullets into people's chests, to little satisfaction. There are also many enemy flying drones, which have an infuriating habit of buzzing about too quickly to be shot. They will kill you often, and you will get cross.

It does have its moments. On one mission, I parked our helicopter on a grain silo overlooking a big farm. I was playing with another friend at the time, who promptly got out, hovered in mid-air for a deliciously-cartoonish moment, then plummeted to his death. Our third buddy climbed down and revived him, then they combed through the complex while I sniped supportively. I've spent most of my time in Breakpoint on my lonesome, where sniping soon feels soulless. It's just deleting blobs from afar, but hearing real life people appreciate the deletion of those blobs from up close elevates the act.

Still. I'm reluctant to give Breakpoint too much credit for that. Most bland activities are enjoyable if you do them with people that you like, and better playgrounds can be found elsewhere. 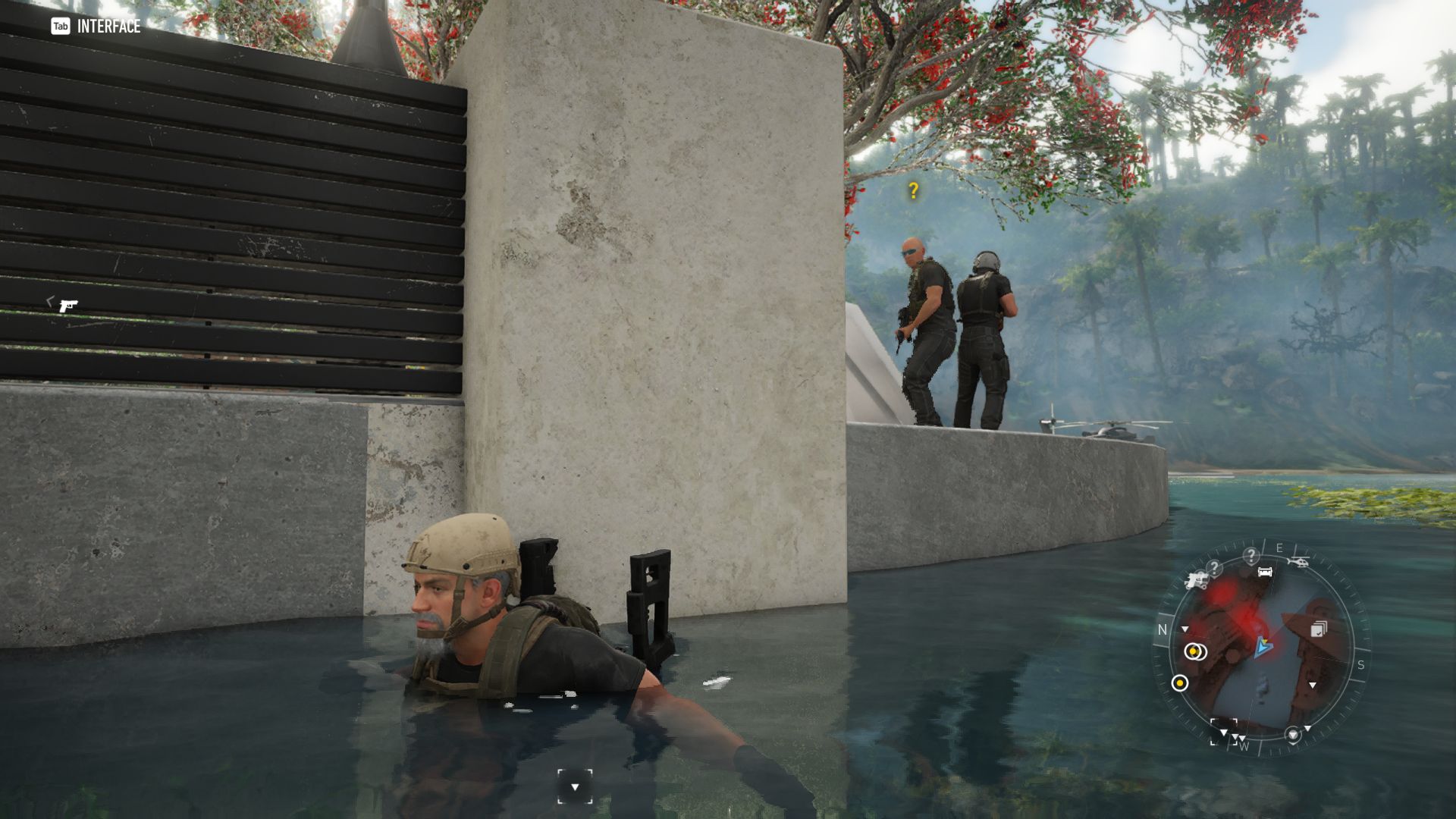 It's designed with multiplayer in mind, and likes to pretend that your roles are more specialised than they are. I picked the Sharpshooter class, which comes with mild advantages to long distance weapons and a useful but boring ability that gives me four high-powered shots with a sniper rifle. I could have been a Panther: stealthy, with a smoke grenade ability, or an Assault, who can press a button to make themselves tougher. Medics can revive people at range, which is handy, but similarly uninspiring. The distinction between play styles mostly crystallises into 'are you sniping or nah'.

You earn perk points, which can in theory be spent on further specialisation. But far too many of these perks turn 'stuff that is a pain in the ass' into 'less of a pain in the ass', and therefore feel mandatory. If I hadn't spent most of my points in the first few hours mitigating initially overzealous stamina restrictions, I'd have accumulated many more hours hobbling about in exhaustion. After that was dealt with, I upped how many healing syringes I could lug around, increased my rate of XP gain, and bought additional slots that more powerful passive abilities need to be equipped into. Even these tend to be bland, increasing your range, your damage with particular guns, or how much XP you get from spotting folks with your drone. It wasn't long before I struggled to find perks that sounded like they'd be much use. 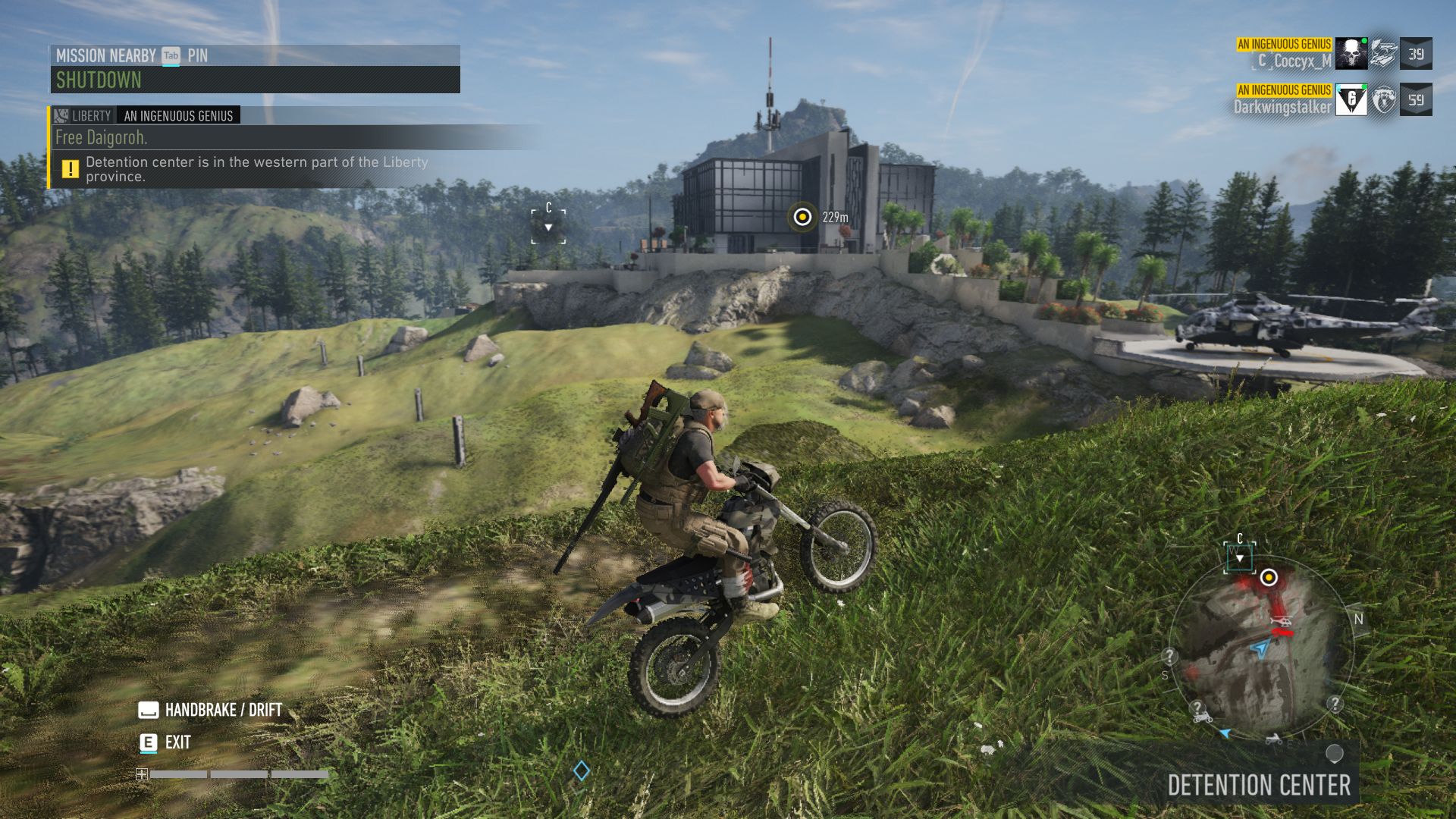 Life gets a bit miserable when you've nothing to look forward to. The perks are uninspiring, but they are at least more distinguishable from each other than the guns. At no point in Breakpoint did I find one that changed the way I played. It was just a stream of shootysticks with progressively bigger numbers, none of which made any perceptible difference to how quickly enemies went down. I can't help but compare that to Destiny, where I agonise over weapon choices and finding a good new gun feels like an event.

It's vapid at every turn, my ennui only punctured when shoddy mission design became actively frustrating. Every death resets the population of an enemy compound, of course, dragging you yet again through an encounter that's already barely any different to the last one. I attempted a particularly onerous wave defence mission half a dozen times. In co-op, we ran into problems with NPCs that wouldn't go where they needed to, and a helicopter mission that left all active participation to the pilot. With multiplayer such a focus, that misstep is mystifying. 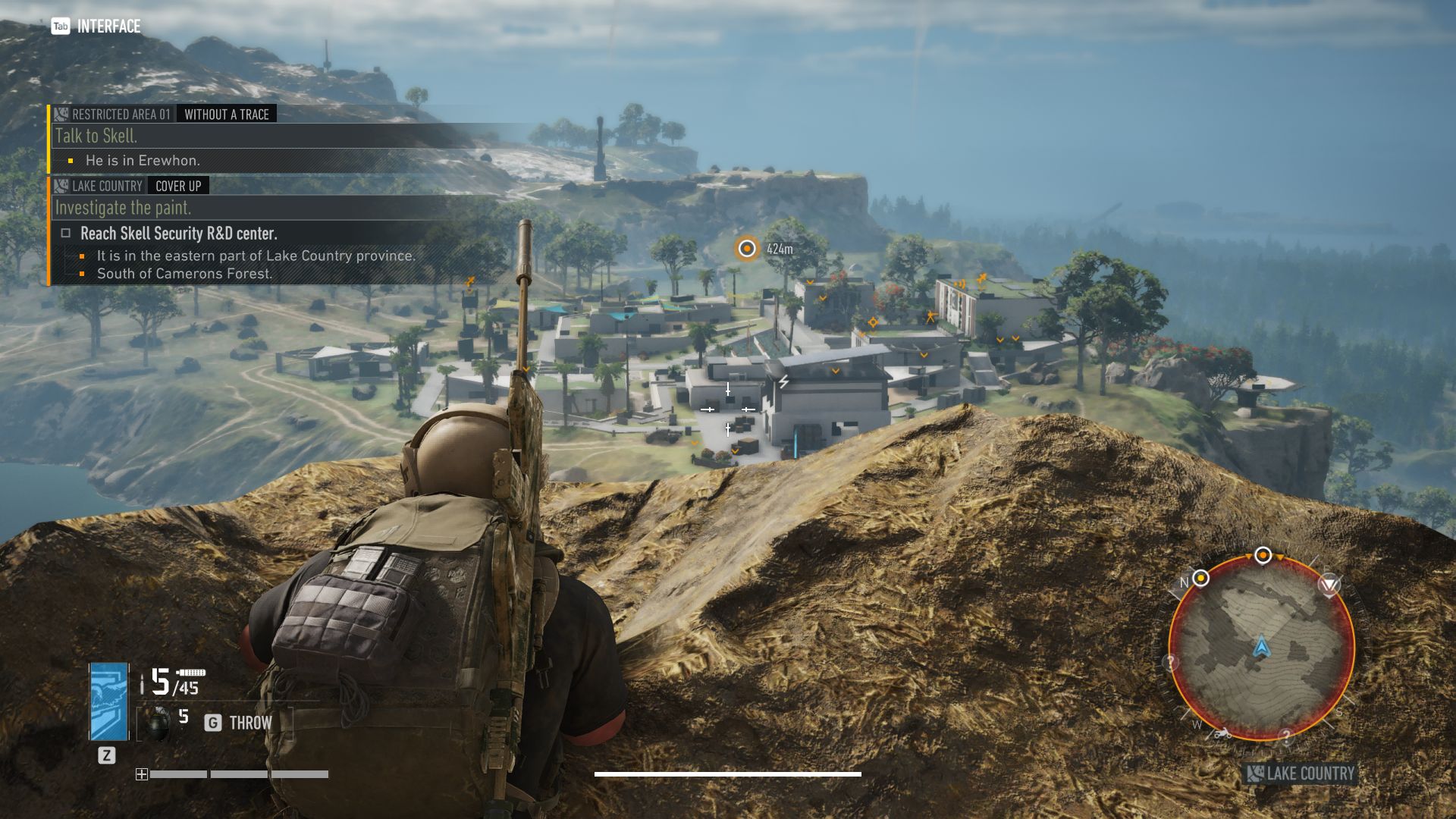 In 2019, a massive and meticulously-crafted open world just doesn't cut it. Any life breathed into Ghost Recon Breakpoint will have to be pumped into it by you and your friends, and you'd do better to save your breath for other games.