A little known title from seventeen years ago is seeing a small screen adaptation on the horizon. Halo: Combat Evolved was a first person shooter that encouraged retro gamers to traverse national parks on a large ring and visit the local library. The TV retelling of a guy who doesn't talk and the sexy lady who lives in his arm is coming to Showtime in 2019, thanks to Steven Spielberg's company Amblin and The 343 Factory. It might seem odd that the world is only now remembering this title, but I'm willing to bet there was a wave of renewed interest after the DUKE Xbox controller was re-released this year as a $70, wired device, for ironic chuckles on modern systems. It's good to look that far into the past and agree that some things don't deserve to be left there. It's good to not think that this took way too long to accomplish and to ask why we couldn't have this anytime before now. It's good to not be upset about the series of events that lead us here. It's good to be good. Good.

The press release from Xbox says that they are happy that their game is now going to be on TV, and that maybe people will see the thing on their TV and want to buy Combat: Halo Evolved. This is not the first time that the video game company wanted to make their game be other places where it would not be a game, but none of that panned out. Somehow, a small but dedicated fan base has clung to hope for more than a decade now to see any sort of large scale re-imaging of a title that meant a great deal to them, only to be repeatedly beaten down by watching dream pairings of project and director crumble under what appears to have been corporate mismanagement and greed that should have eaten away at their sincere desire to see this transmedia universe get the treatment it deserved. But no. No one got bitter over the last seventeen years and four months. No one.

From the Wikipedia for HAL0, there were apparently a series of lesser known sequels. Who knows if the series will be borrowing from those entries or if the only good story was in the first title?

Frustratingly, the project has been handed off to Rupert Wyatt to direct. Wyatt is known for incredible world building and a keen, visionary eye. His work in making science fiction stories grounded and beautiful, while making us care for characters by taking inhuman subjects and making them achingly human in films like Rise Of The Planet Of The Apes -- well, what's he doing wasting his time or immense skill set on a project like this? It's a real GET for the production which might not get much word of mouth otherwise.

Except from CNN, who covered the announcement. No, this photo has not been altered in any way. 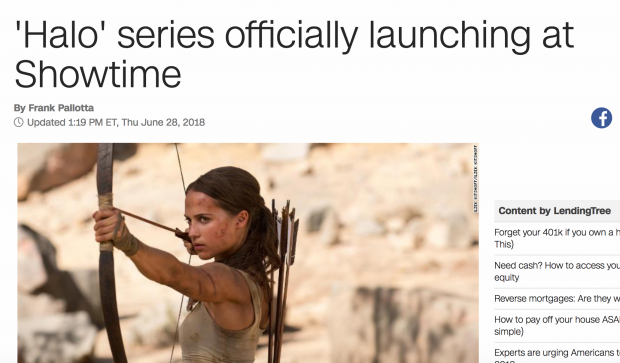 I am a bit surprised that it features an image of the adaptation of the slightly better known "Tomb Lady" from 1996. "Tomb Lady" is, however, a much better known IP than The Halos, so perhaps this choice is meant to drum up interest? Or maybe CNN couldn't find an image of The Halos? It is difficult to track down a copy of the title at this point.

Did you or a kid in your neighborhood once own this hidden gem? Did you find it in your local arcade? Or is this your first chance to experience the adventures of Master Chef? Is it good that Steven Spielberg's Amblin Entertainment has a hand in this after the excellent work he did on the ultimate video gamer film Ready Player One? Is it possible that all of your enthusiasm for something like this was drained by years of failed adaptations including the colossal let down of the implosion for a movie based on a script by goddamned Alex Garland with director Neill Blomkamp which would have been incredible and now it feels like a small-screen adaptation on TV show budgets at Showtime of all places is, at best, a frustrating consolation prize?

Who else is stoked? Who is your dream casting for Quortana? Sound off in the comments!