If you click on a link and make a purchase we may receive a small commission. Read our editorial policy.
Developer: Firaxis Games
Publisher: 2K

It is very hard for me not to think about XCOM: Chimera Squad as a warped and watered down version of XCOM proper. We're still in the same universe, fighting many of the same enemies. We're still alternating between squad-based missions and a boardgamey over-structure, researching new weapons and gadgets while unlocking new abilities for our troops. This is still, fundamentally, a game about devising well-coordinated attacks between increasingly fancy super-soldiers.

It's also fundamentally very different, because now your enemy's turns are all muddled up with yours. I'm still agonising over whether that makes it fundamentally worse.

Let's pan back a bit, first, because turn-taking is far from the only difference here. The game's world is in a very different shape, for a start. The big bad Ethereals from the last two games have buggered off, leaving behind a fractured society of formerly-enslaved aliens, humans, and hybrids. You're the police, now, dealing with city-level thugs rather than world-threatening disaster. It's a great idea for a setting, even if it is a bit tonally jarring. I was not ready to see Mutons bumming around the streets in sweatpants.

It's also mostly ignorable, apart from the way some of your squad are snake people now. My snake assassin has the voice of a regular woman, which is distracting, but I like that she has a voice at all. Your squad is made up of actual characters, who bicker in the locker room. None of them are particularly charming or well written, but I still appreciated their background babble as I pored over loadouts and other strategic decisions back at the base. 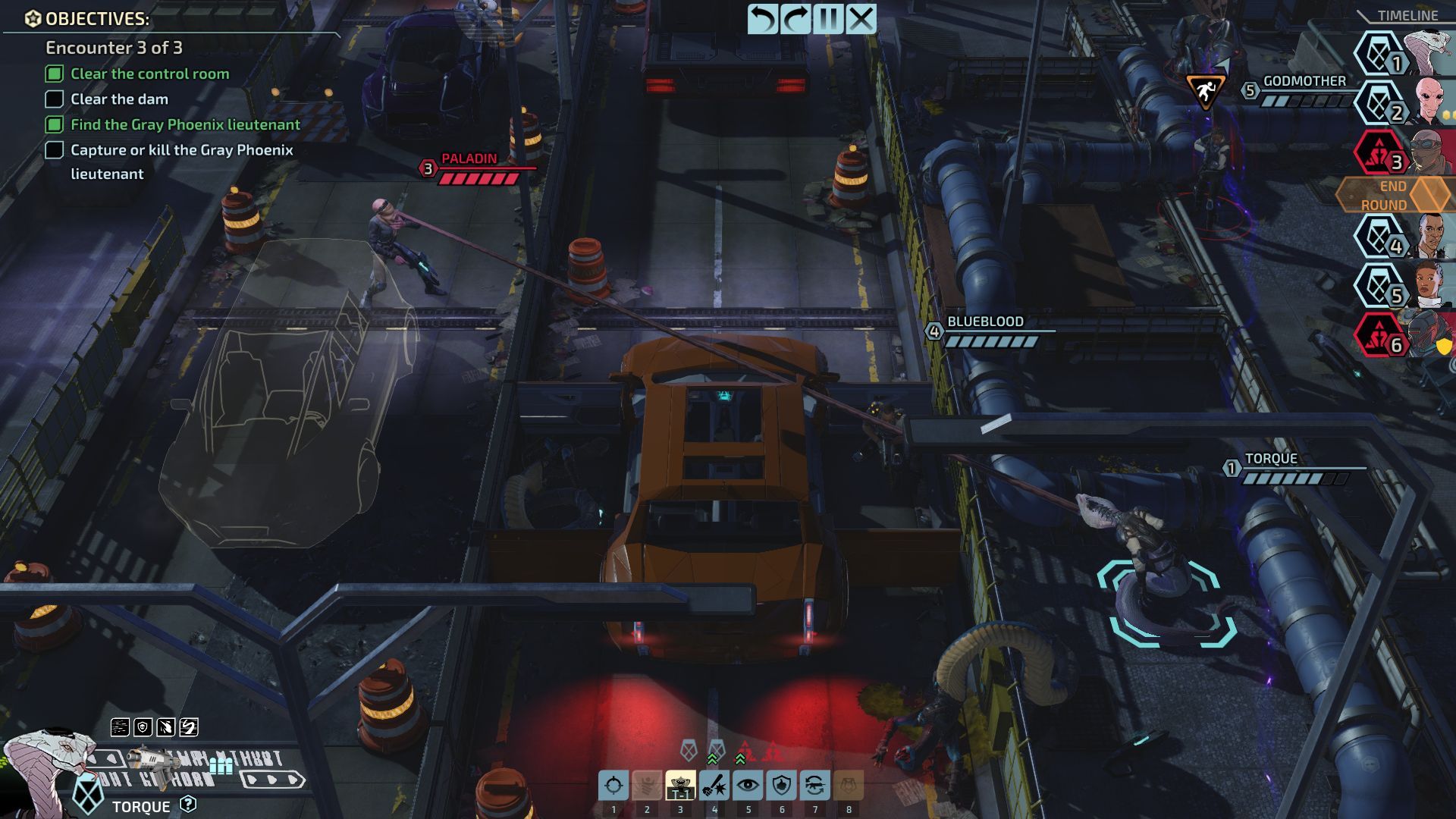 They also can't die. If you lose a character on a mission, you get a game over screen rather than a weighty consequence. Firaxis have excised one of the best parts of XCOM, where you were forced to persevere through mortal setbacks. I don't understand why. Fatalities would mean you wouldn't get to see some inter-character banter. But - and I don't say this lightly - screw banter. The change robs each game of an arc, and makes the suspense less palpable. It means I don't have any dramatic stories about one unit nobly sacrificing their life to save everyone. It's all thoroughly unpalped.

Another big change is that every fight now takes place in a single room. Your squad breaches into the room in question, prompting you to think carefully about who should go where. Maybe I should send my psychic hybrid in through that window, where anyone he hits will get stunned? Or maybe he'd be better off with the rest of the squad, where he can use that special smoke bomb to give everyone a defensive buff? The longer missions send you into three consecutive rooms, so you spend a good portion of the game mulling over breaches. They work. They're probably my favourite part of Chimera Squad, and I certainly don't miss the faff of painstakingly manoeuvring my squad between firefights. 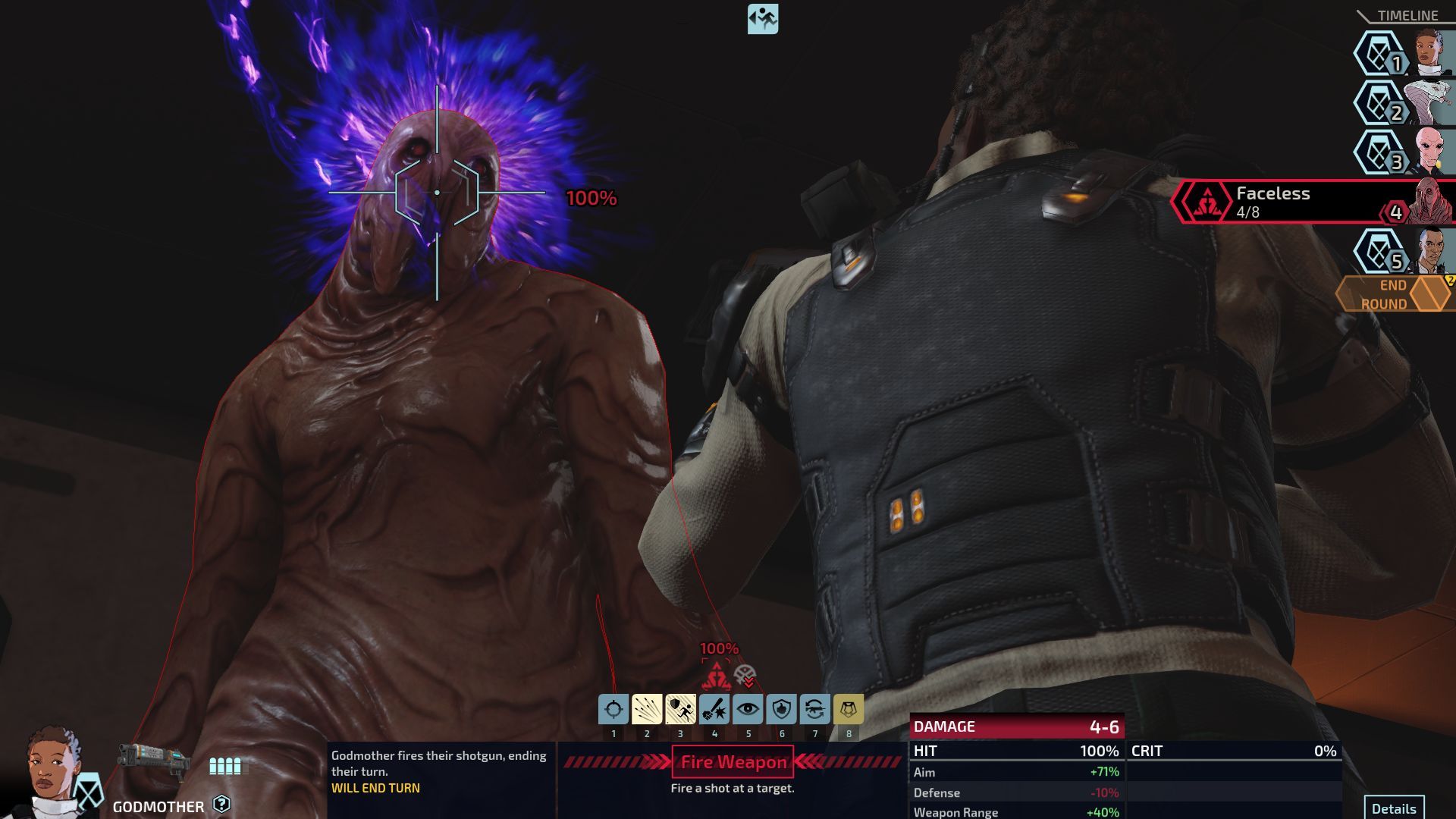 When you burst into a room, you need to figure out who to prioritise. "Surprised" enemies are easier to hit, but "Aggressive" enemies will take a shot at you if you don't kill them first. "Alert" enemies will take a special action, like buffing their mobility, repositioning, or slapping shields on their allies. You can also run for cover instead of shooting, but you probably shouldn't.

Right then, here we are. The biggie. Turns. Once your squad is inside, an initiative order appears at the top right. You act with one troop, then the enemy moves one, and you keep going until every enemy is dead or unconscious. This can drastically simplify your tactics, because it's nearly always best to kill the units that are about to take a shot at you. I found myself running through a checklist: can I polish off the next attacking enemy? Can I kill anyone else at the same time with a snazzy ability? And is it worth using any of my items?

At times, I felt unpleasantly railroaded. There's less room for creative plays, and I was often left with little doubt about what was best to do. There's also still that old XCOM problem, where doing well early sets you up to do well later, and you start steamrolling once you get ahead with research and good equipment. I spent most of my time playing on normal difficulty, and the back half of the campaign felt trivial. I'd constantly get away with things that I shouldn't, leaving my agents hideously exposed, but watching shot after shot either graze them or miss altogether. 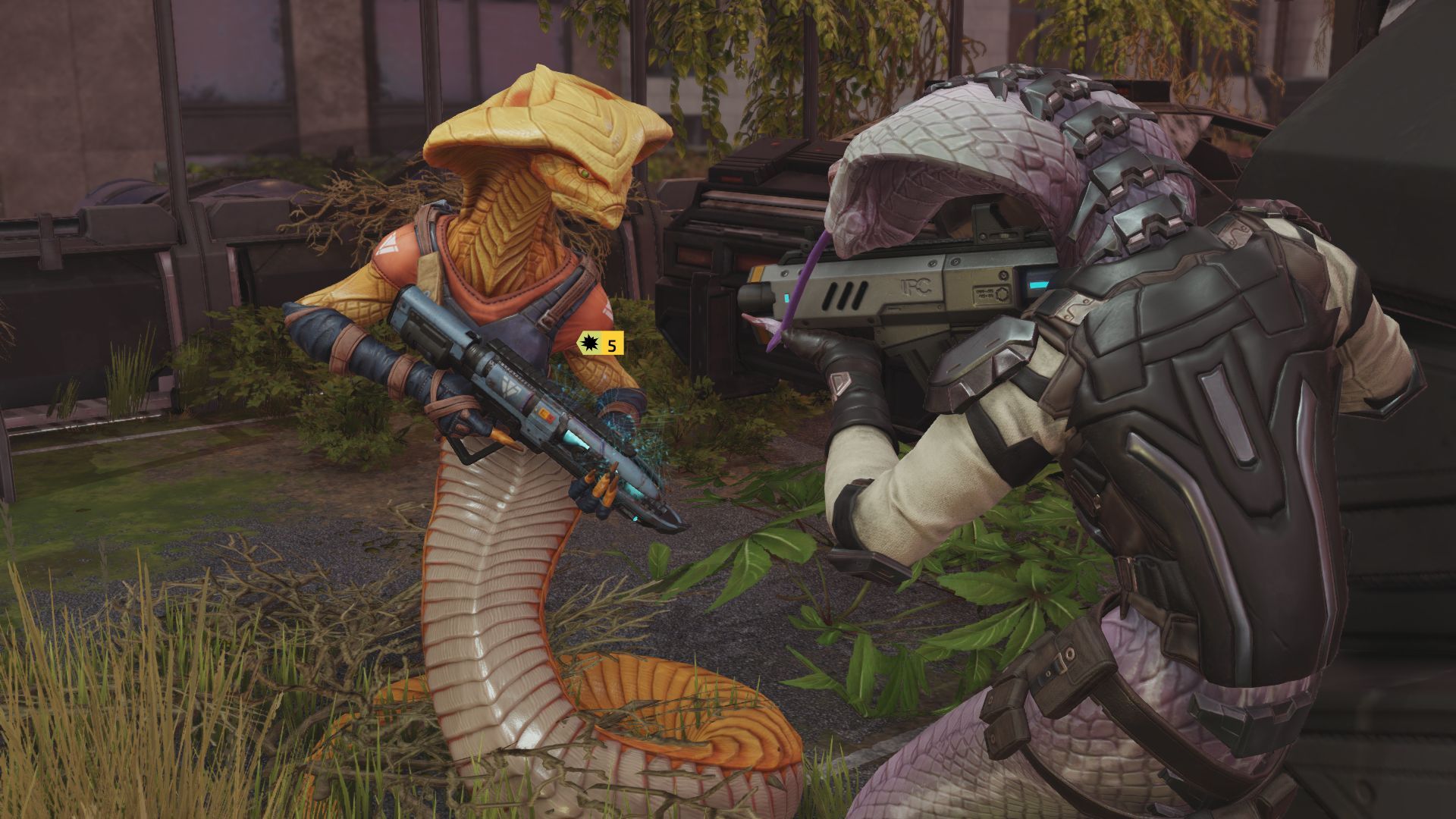 There's a whole system I never even saw, where squadmates that get knocked out (you can stabilise them to avoid death) are replaced with upgradable robots. I was strong enough to ignore all the nuances that make the game fun. Then I played a little on hard, and it was like playing a different game.

More often than not, I wouldn't be able to kill enemies outright - or I'd only have a very small chance of doing so. Suddenly, I was agonising over whether to take small chances on eliminating enemies, or near-guaranteed shots at piling on damage elsewhere. Everything mattered. I started using defensive abilities that I'd never needed to bother with, and putting real thought into my squad composition. My plans got more complicated. I had to start planning properly, capitalising on moves from several turns ago, like using my snake lady's tongue to yank an enemy through my gunslinger's overwatch zone. With brute force nonviable, it didn't feel like I was taking each turn in isolation. They were interdependent. 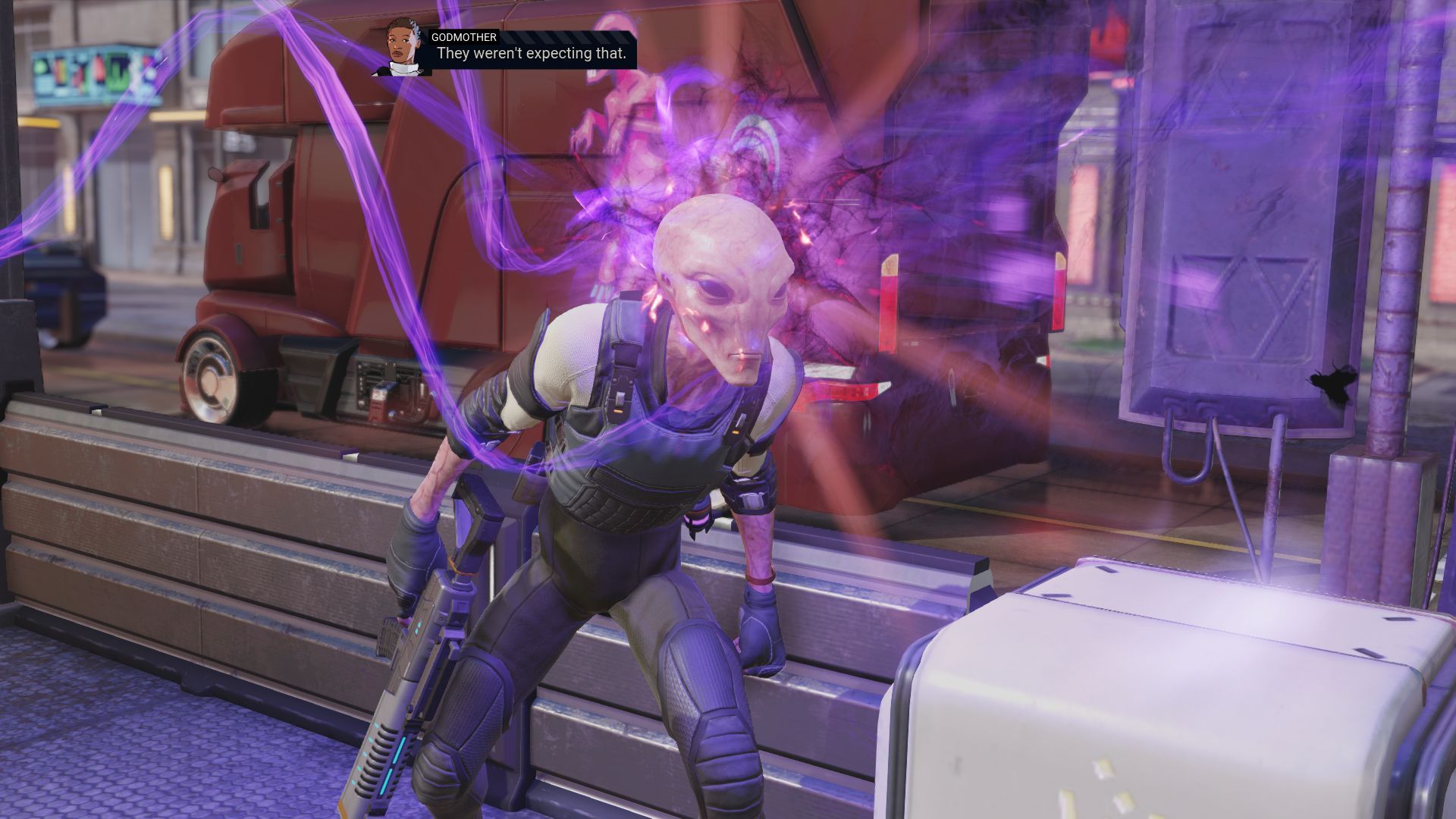 It still never reached the complexity of XCOM 2, though. Chimera Squad is still streamlined, often demanding you pick from a handful of possibilities, rather than concocting your own. There are annoyances, too, like the attacking AI spreading damage between my units rather than trying to finish people off. I wish I could skip ahead to the end of a unit's turn, rather than watching them all jog about the place. Sometimes it gets stuck on somebody's go, too, and you have to spend a minute starting at a snake bum.

These are annoyances, though, not game breakers. Overall, Chimera Squad is solid. It's still a shadow of its progenitor, with its new ideas not quite making up for the loss of old ones. But if you try to treat it as its own thing, play at a higher difficulty, and do your best to ignore the snake's voice, I'd say it's worth a punt.