I’m playing bombastic action RPG Yakuza: Like A Dragon for review, and I’ve not spent quite as much time as I’d like with it to give you the full lowdown. But I wanted to give you some of my first impressions - a little rib in the chest before the big sucker punch.

One thing I’m absolutely certain of already is that Like A Dragon is the most expressive Yakuza of the lot. Not that the previous bunch weren’t comfortable in their own skin, it’s more like they were a little too comfortable. They stuck so rigidly to what they knew, it felt like they were afraid to shake things up. And that they featured a main protagonist who, as much as I adore him, approached all problems in one of only three ways (frown, punch, or deliver life lesson) held them back a bit too.

As I spend more time with the game’s new flagbearer Kasuga Ichiban, I can imagine the buzz and the energy swirling around the Sega office, as pens on whiteboards sketched out his journey. Kasuga's smiles are wide, and he actually laughs - like, slaps his chest and curls over and lets his emotions run away with him. It probably sounds absurd if you've not played a Yakuza game before, but it’s beyond refreshing to play as someone as bouncy and unpredictable as Kasuga. If Yakuza's hostile, fantastical world is a ladder, Kasuga ascends it with a kind of flailing gusto.

Kasuga is different. He’s proud to be a yakuza, and deliberately plunges himself into their underworld, whether it’s a good idea or not.

His hands do slip occasionally, as he riles up the wrong thugs or makes a poorly-conceived attempt to outsmart his family patriarch. Kiryu’s determination often saw him get caught up in nasty yakuza business when he simply wanted none of it. Kasuga is different. He’s proud to be a yakuza, and deliberately plunges himself into their underworld, whether it’s a good idea or not. Yet there’s nuance to his naivety, in his unwavering loyalty and adoration of his boss, and in his belief that the yakuza can be a force for good. I'm rooting for him nonetheless, because his enthusiasm is infectious.

I also like the way I can make Kasuga my own. Now that Yakuza’s committed to the RPG route, dialogue options I choose grant XP towards six different personality traits. I can make my Kasuga more passionate, or confident. I can make him a chef and beat people down with ladles. I can make him wear an iron thong for those juicy stat boosts. The same goes for my party members, who are all just bloody excellent folk. 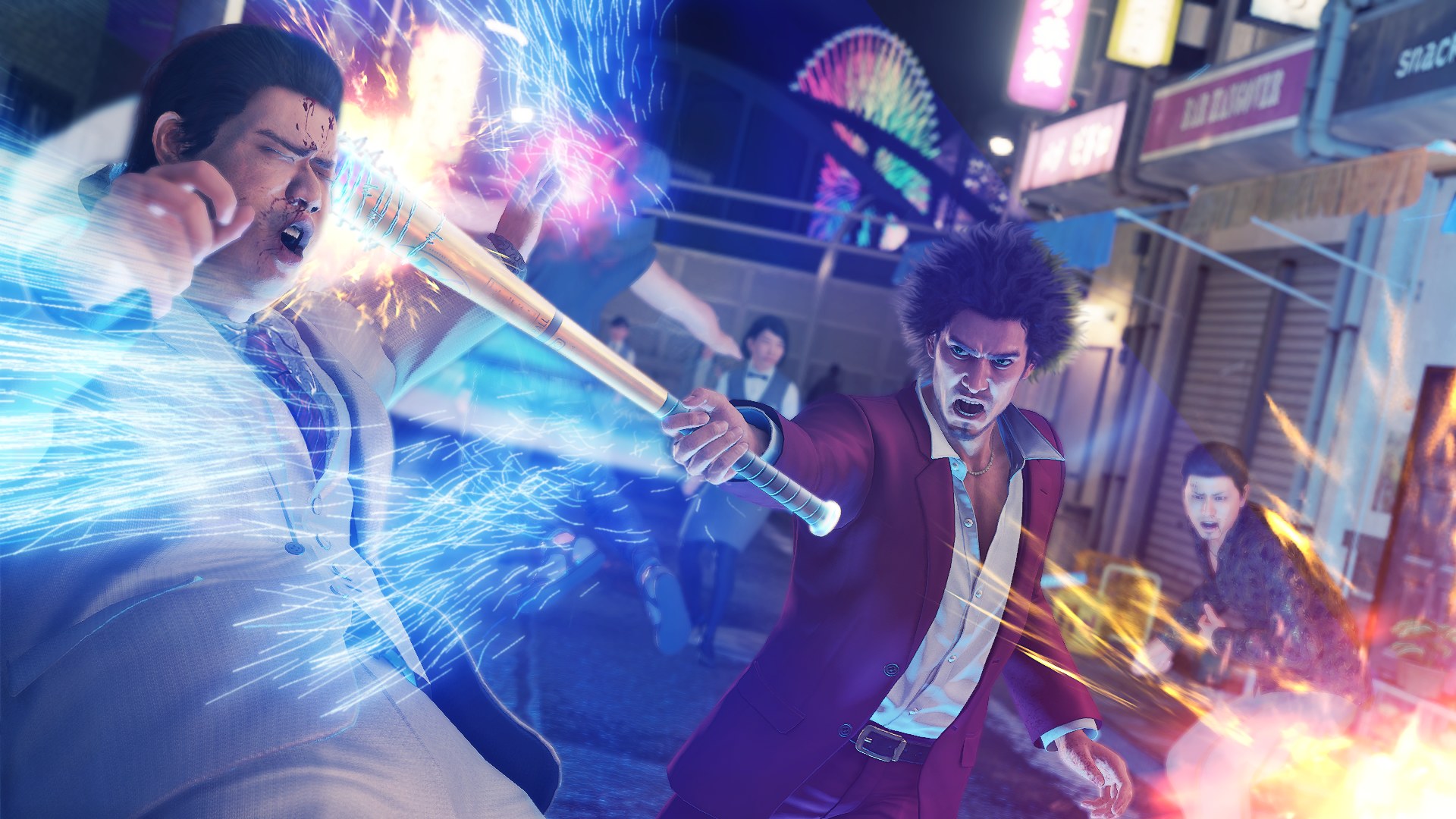 It’s not just Kasuga who’s expressive, everything feels more playful. The enemies, the gangs - heck, Yokohama’s residents as a whole. There’s this elusive Korean mafia who lurk in the shadows and siphon electricity from riverside residents. They don’t even wear their family badges to maintain anonymity; a series first. You’ll fight city slickers who literally drip with oil, or crazed otakus who wield glow sticks and wear waifu t-shirts. Your chats with party members strengthen bonds and unlock special moves. It is still very much a Yakuza game at heart, but the new RPG flourishes add extra colour to personalities, extra punch to fights, and a greater sense of reward to everything.

I’ve spent the last three years or so lapping up the original six Yakuza games, having only recently finished up the last entry with teary eyes. Up until now, I thought Yakuza: 0 would always be my favourite, but the way things are going Kasuga is poised to wrench away its crown. He will no doubt pop it on with a big grin and a triumphant cross of the arms.