If you click on a link and make a purchase we may receive a small commission. Read our editorial policy.
Developer: Brave At Night
Publisher: No More Robots

I imagine death is anticlimactic for most people. Maybe even more so for kings. There you are, with your whole life's confusion and doubt and pain cooming to a head, everyone turning against you for unclear reasons, all your efforts accumulated at last, and you still just sort of... stop. After that, all you get is an image of a mildly sad, grey face, and a sentence or two saying you blew it.

But what happened to everything you'd been working on? How did the people around you cope? Did anyone really notice? I don't suppose any of that matters. At least King Eryk is given a reason, I suppose. Eryk is you, by the way, assuming you're playing Yes, Your Grace like I have been. And he probably has more reason to complain than I do. 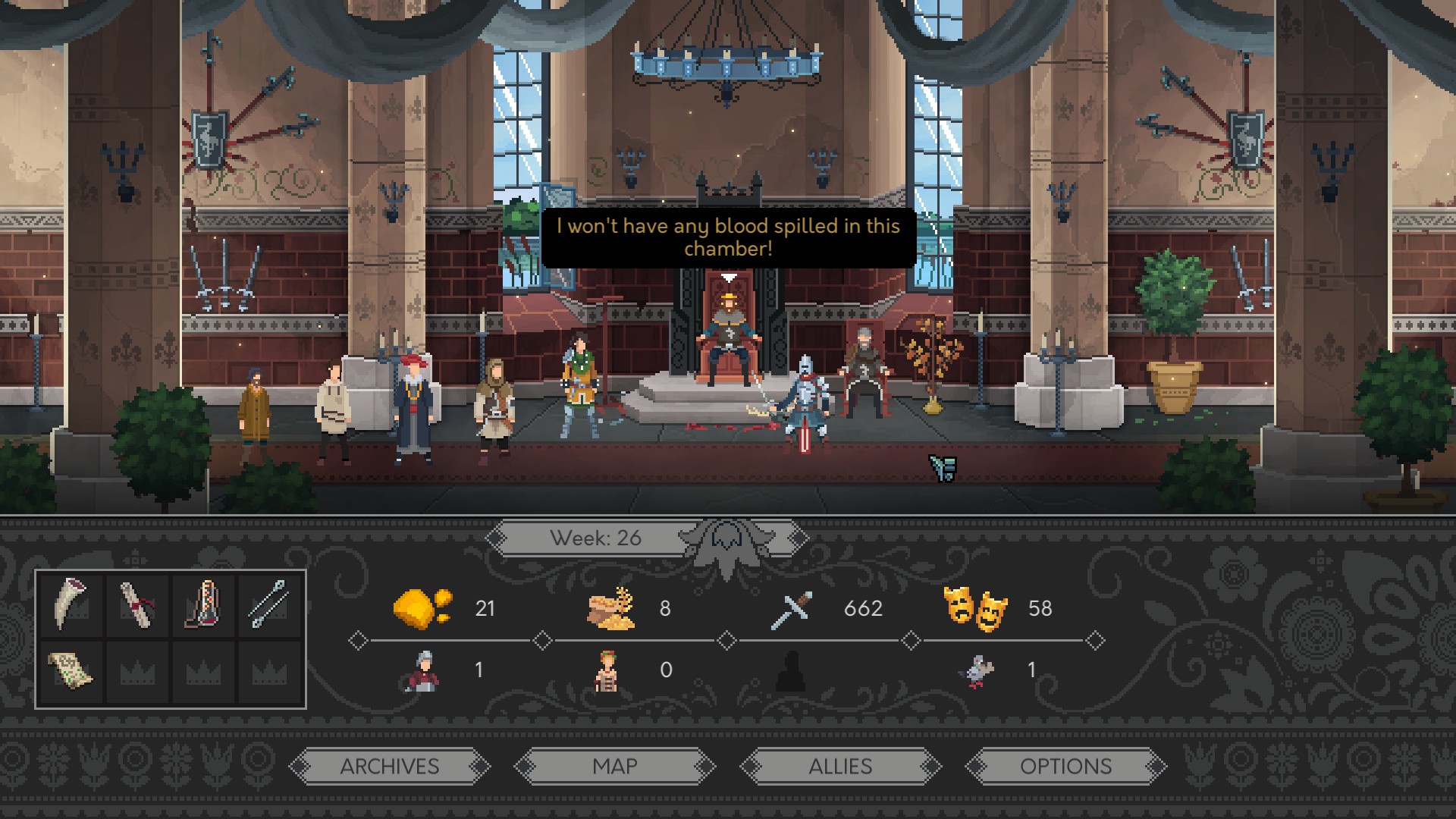 As Eryk, you are faced with lots of petitioners demanding decisions, and a limited time to prepare for both a trial and a hostile army. The obvious thing to compare it to is Reigns, the quickfire, yes/no, regal survival game about balancing four societal pillars for as long as possible. Yes, Your Grace is less concerned with trading numbers though, and more with resolving Eryk's specific plot. There's gold and food to think about, and morale and soldiers to gather, but once out of the intro there's little danger of running out of either.

There's no immediate threat at all, in fact, making each decision more about considering your long term situation. Even raising the happiness of the people counts for something. In fact I'm pretty sure it's the key to victory, since the happier they are the more tax they pay, which ultimately means more of everything in the long run.

Wherever possible, you'll want to give food and gold to needy people, while also keeping a skeptical eye open for chancers and wasters who'll take you for a ride. Indeed, discerning the truth is also vital for working through subplots involving other nobles and influential characters beyond your kingdom who, if satisfied, will offer desperately-needed soldiers to get you through the oncoming battle. They're also suspects in the trial you have to judge. 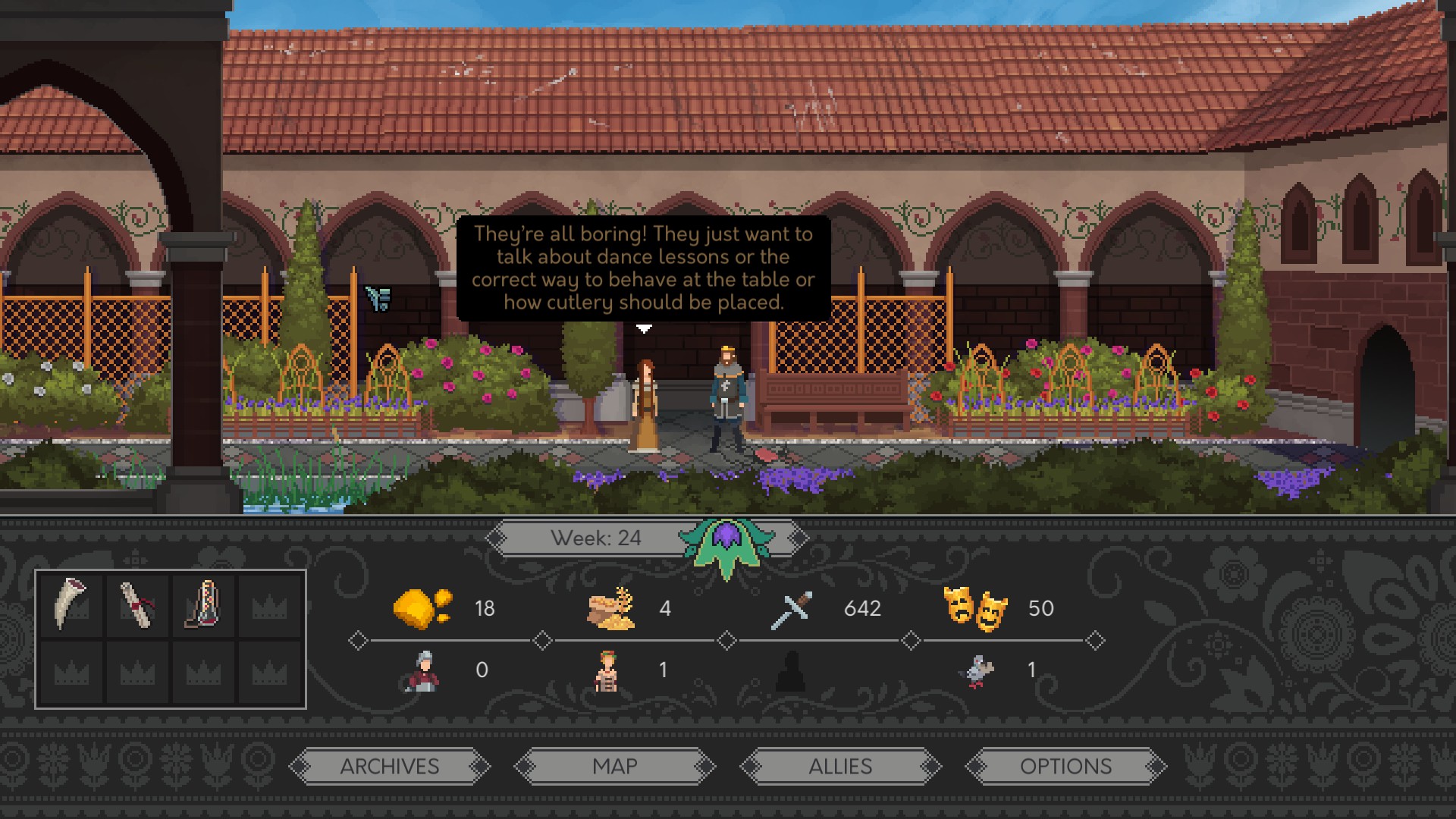 There is intrigue, you see, between several local poshos, and one of your daughters is caught up in it. You must find evidence and investigate before holding a trial, the outcome of which will probably decide whether or not your kingdom and family survive.

Each week, meanwhile, supplicants approach your throne and ask for something. Usually they want supplies, but some need the help of your agents, such as a witch, or your one, overworked general. Major characters, however, will mostly want favours. These range from the gift of a simple painting, to a marriage with your young daughter. But guessing which of them will have the lowest cost in the long term isn't all that simple - especially if you play a lot of games, and watch a lot of post-Game of Thrones fiction, and are thus constantly second guessing everyone's intentions.

With your decisions made, you'll send your unoccupied agents to explore named spots on a regional map, rooting out bandits and evil magicians, or helping out the peasants. You can issue one invitation per week too, in order to question suspects, ask for alliances, report that you've imprisoned the thief a person was looking for, or all of the above. Finally, you ought to speak to your wife and kids sometimes. Your wife is boring, but the kids are cute enough. Asalia, the middle one, is my favourite (all parents have favourites, they just have to lie about it too). 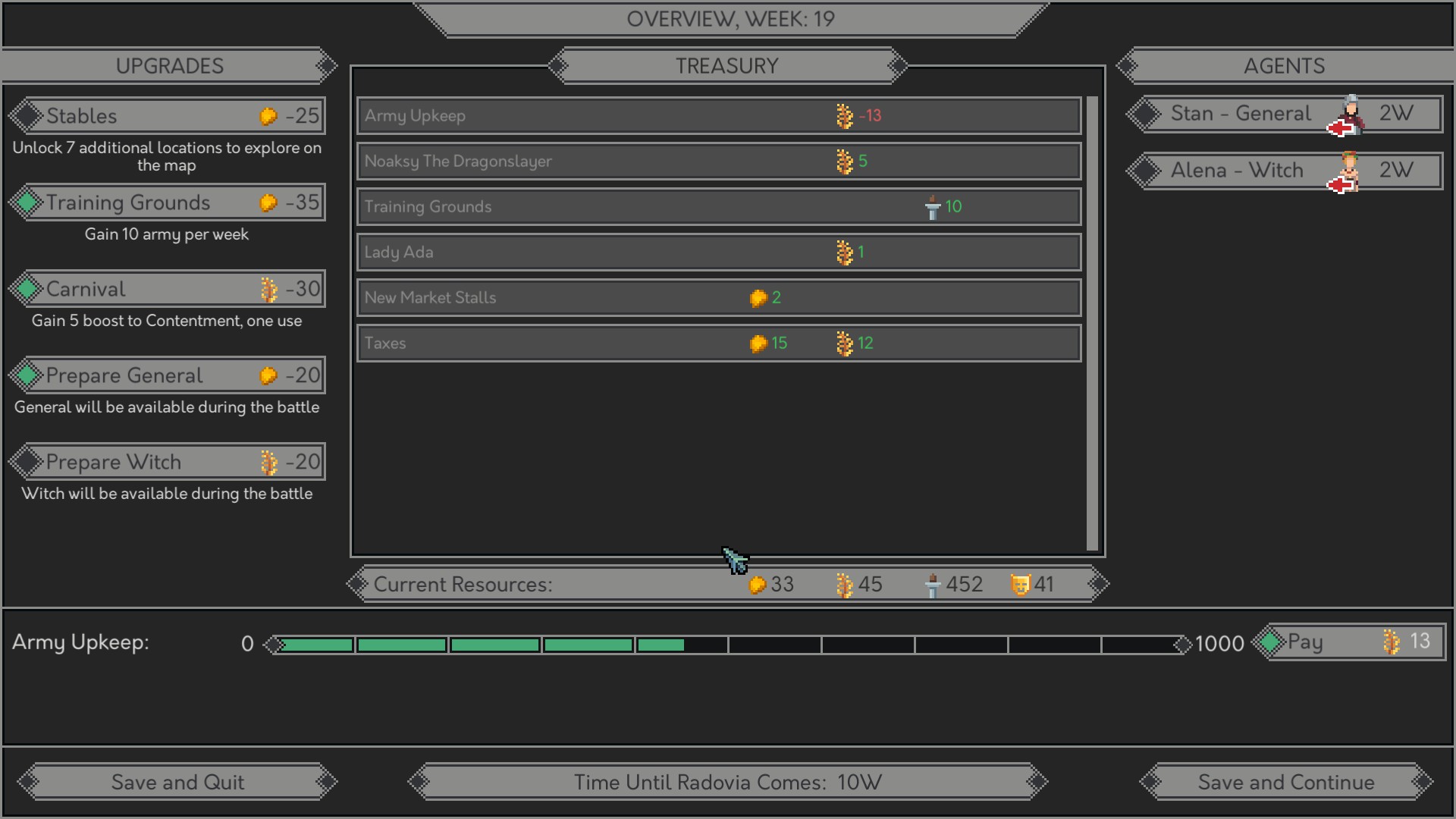 Yes, Your Grace is a nice enough time, but I've come away from it faintly dissatisfied. Its reliance on limiting your time and actions is necessary for the premise of a beleaguered king desperately scraping about, but there were too many times where I felt a bit cheated. I had my one weekly invitation wasted several times on characters who'd show up but then have nothing to say. In particular, I got the impression I was supposed to invite Lurs back twice, but both times turned out pointless. It doesn't help that some clues point towards, say, a perpetrator who lives by a river - but then you've no way of knowing who that's true of without just asking everyone directly.

Other things felt unreasonable. The lowliest peasants would often require immediate answers. I would find myself with several options in theory, but neither the money nor the available agent at that precise moment to carry most of them out. One representative wanted to build a shrine, and my options were to pay a large sum of precious money, or send my witch. My witch happened to be unavailable because I hadn't paid for her support that week, but apparently building a shrine couldn't wait a further week. One character straight up scammed me for weeks, costing me time, money, and an alliance (that with hindsight could have won me the game), and even actively supported my enemy. But the only option I had was to bend over and take it, or ask him to leave. Fuck that! He's right there! He confessed! I'm the KING. ONE MILLION YEARS DUNGEON.

And sometimes, I just wanted to hear everyone out before deciding whose need was greater. One character cost my kingdom four points of happiness (last time I'd gained 4 points cost me over 20 gold), because I wouldn't help him - some random labourer - win an argument with his wife. 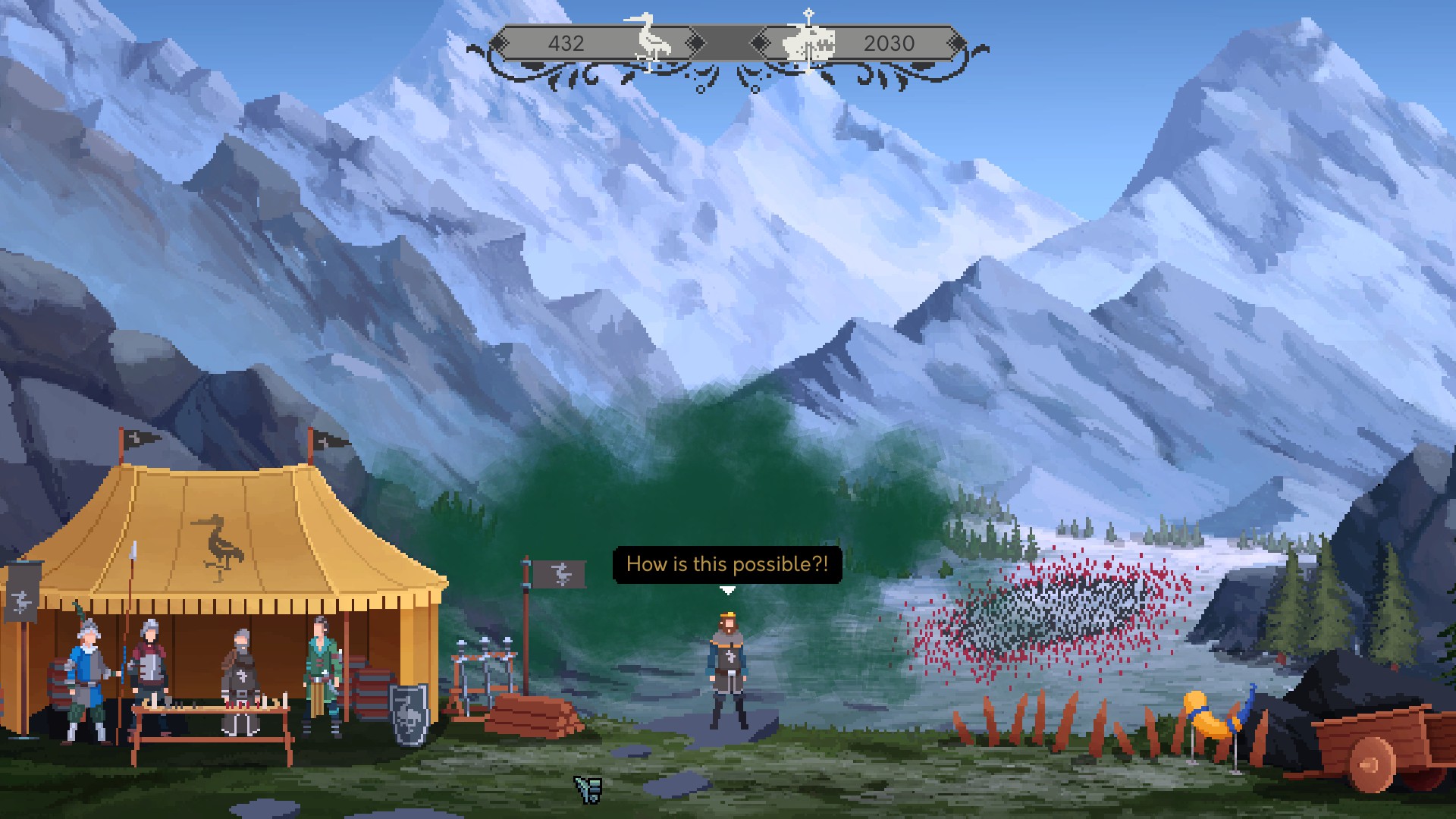 The exact order in which you can do things is awkward too - one week I paid for my witch's help specifically because I wanted to talk to her about something. But someone in the throne room then asked for her help, and I had to choose between turning them away and losing happiness, or agreeing and losing the witch for another week.

Maybe I'm asking for it to be too easy? All of these are minor details on their own, the kind of things that most games trip upon here and there. But here, they can lead you down a road to a point where you're probably already screwed and just don't know it yet. Which is also not necessarily a huge problem, but the game's save system is limited to autosaves taken eight turns prior to where you are at any given time. This kind of eliminates the smaller problems, but... well. I found five of the six bits of evidence in the end, and 880 of the 1,000 soldiers I needed to (probably) survive.

I'm pretty sure the evidence requirement is basically all or nothing - I had one suspect I couldn't even name, and no idea what sequence of events I was supposed to trip over to unlock what I needed. And to get the soldiers I'd have to go back to my very earliest turns, and I just don't have enough motivation to go through most of the game again to change one or two out of several dozen decisions. 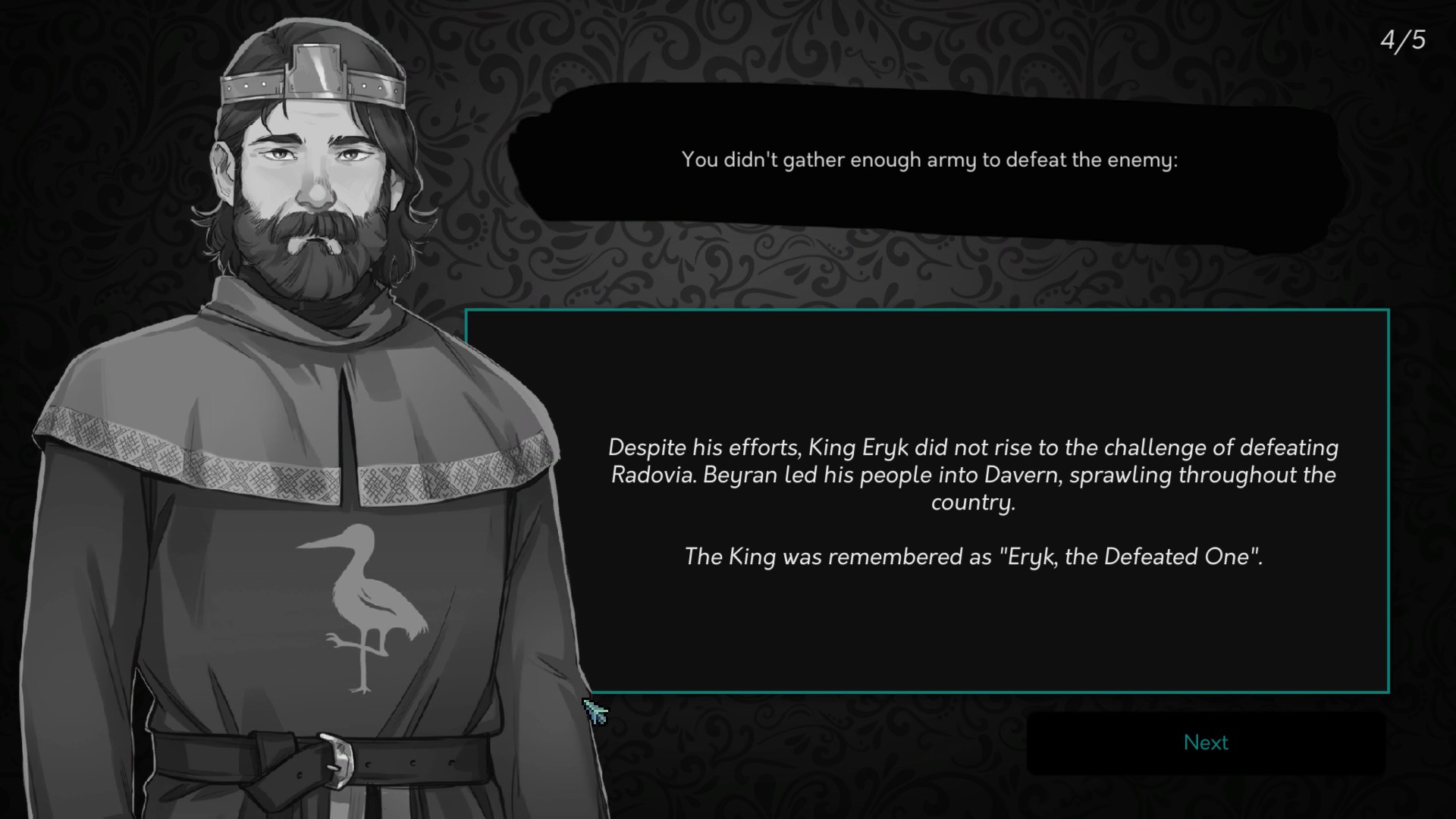 I've enjoyed Yes, Your Grace. It's a pretty game, and the story and subplots have some nice details and solid surprises. I like how you can hear distant armies chanting in the intro, torches in your bedchamber, and the hubbub of the streets from your throne room. The cheerful "Wey!" when happiness goes up is great. I've also much enjoyed the thought that the king is actually doing what I tell him, when I have him stand up suddenly in his throne room, declare that he likes his chandelier, then leave. But for all the time I spent making decisions, I felt let down by the ending - and the time and effort it would take to start again.