Learning how to build a PC from scratch is all well and good, but having someone make one for you - or at least make most of one for you - can sometimes be a heck of a lot easier, especially if you're after something altogether more petite to maybe sit beneath your telly or perch neatly on top of your desk without having a hulking great tower bearing down over you. Something, perhaps, like the Nvidia GeForce GTX 1070-equipped Zotac ZBox Magnus mini PC.

I've got the E series ER51070 on test today, but you'll also find the Magnus in all sorts of different shapes and specifications, both as a complete unit or half-built barebones PC where you need to add your own RAM and storage options. Going down the latter route can often be a useful way of saving money, especially if you've already got said components from a previous PC to drop in once you've got it home, but they can also be a bit fiddly due to their often miniscule dimensions.

Indeed, if the idea of a mini PC appeals to you, I'd probably recommend trying to find a complete Magnus where possible, as popping off the top of the ER51070 presented me with a whole lot of graphics card nestled beneath a second metal cage and not a lot else. Everything else, including its quad-core AMD Ryzen 5 1400 CPU, 8GB of RAM and 128GB SSD, was clearly hidden much deeper within the bowels of its tiny, TARDIS-like innards. Despite measuring just 225x203x128mm, I reckon you'd really need to know what you're doing if you got a barebones Magnus, as those less confident in their PC building skills may run the risk of not being able to put it all back together again.

Still, despite setting you back almost as much as a traditional high-end tower PC (the GTX 1070 model I've got here goes for £925 in the UK), this particular incarnation of the Magnus is probably one of the neatest ways of getting that kind of graphical horsepower into your living room without it being a huge pain in the backside.

I should note that this specific configuration of the ER51070 doesn't look as though it's available in the US, as I've only been able to find more powerful (and thus more expensive) GTX 1080 and Intel Core i7 configurations that come in chassis. There are GTX 1070 ZBoxes in even diddier cases, but I obviously don't know how much of an impact that has on the graphics card's performance, so consider yourself warned.

But seriously, what a graphics card to put in such a tiny box. The Witcher III at 60fps on Ultra at 1920x1080? Go on then. How about an average of 53fps for Ultra-fied Hitman at the same resolution? You're too kind. Silky smooth Rise of the Tomb Raider at 55fps on Very High without even a single compromise in the anti-aliasing department, also at 1080p? Yes please.

In almost every instance, the ER51070 absolutely rinsed through my testing suite at 1920x1080 on max settings, hitting highs of 55fps in Total War: Warhammer II across its battle and campaign maps, an average of 70fps in Middle-earth: Shadow of War, and a massive 120-140fps in both Doom and Wolfenstein II: The New Colossus.

It even managed a steady 51fps average in Assassin's Creed Origins on High at 1080p, and it breezed through the ever-demanding Final Fantasy XV as well, settling around the 50-55fps mark with all of Nvidia's fancy effect gubbins turned off, and between 40-50fps when I switched on HairWorks and Turf Effects. 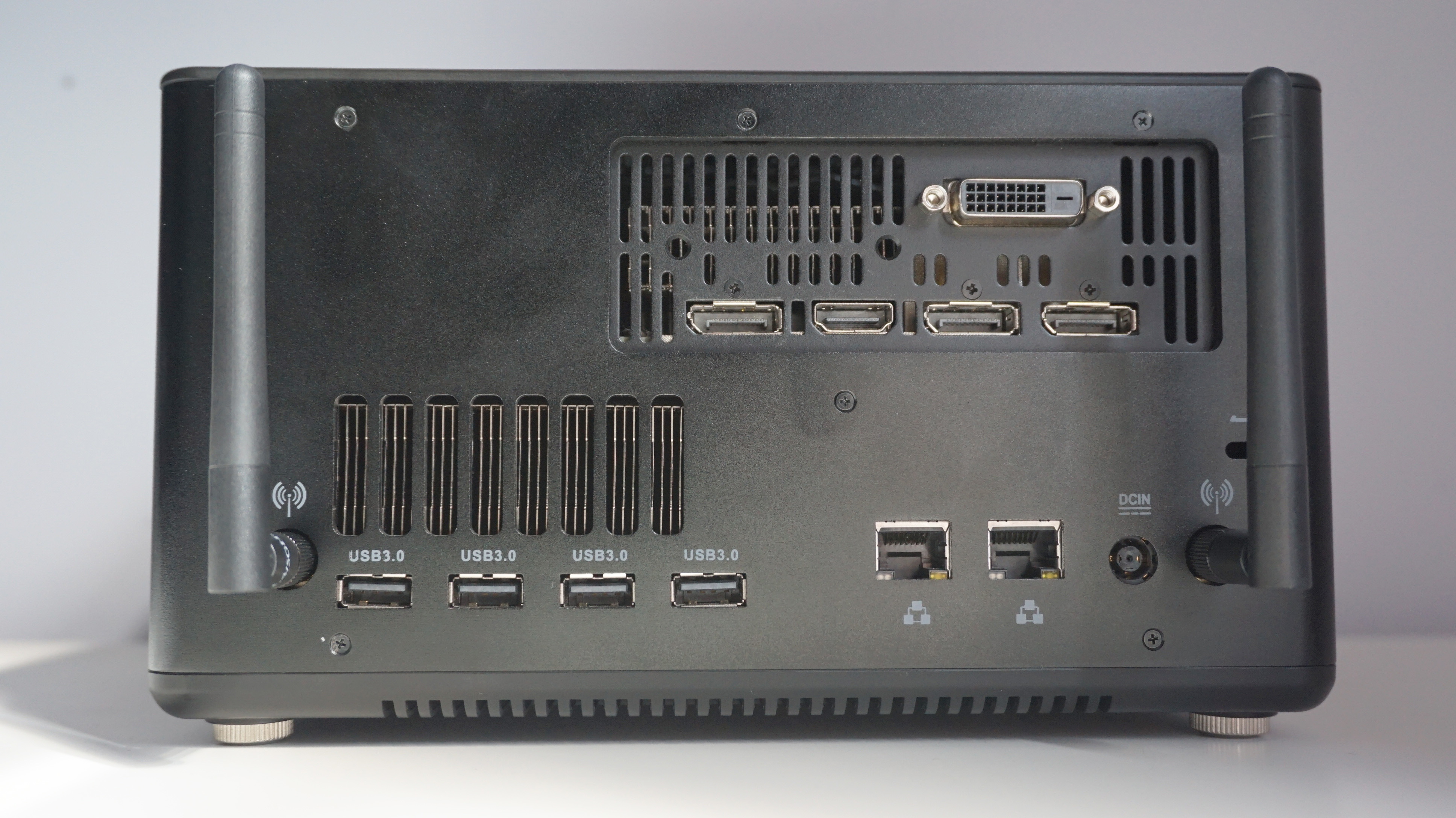 Yes, that's all pretty par for course for a GTX 1070, but I saw equally good results at 2560x1440 as well. This is less useful if you're planning on using it with your TV, of course, but it's still a handy reference point for those considering pairing it with a regular PC monitor.

Indeed, Hitman ran just as fast at 1440p on Ultra as it did at 1080p, averaging 52fps overall in its built-in benchmark, and Wolfenstein II and Doom both blitzedd their way through their respective Ultra and Mein Leben settings in the range of 90-100fps. Shadow of War likewise managed a highly respectable 52fps average on Ultra, but I had to settle for Rise of the Tomb Raider's lesser FX anti-aliasing setting to maintain that silky 68fps average on its top Very High setting. Still, that's pretty standard for this game, even with full-sized GTX 1070s I've tested in the past.

Some games will naturally force you to make a couple of graphical compromises to maintain 60fps at 2560x1440, but even then you're only looking at dropping things down one setting. Both The Witcher III and Final Fantasy XV felt perfectly comfortable on their various max settings, averaging between 45-50fps apiece, but High proved to be infinitely smoother, lifting each game to somewhere around the 55-60fps mark. 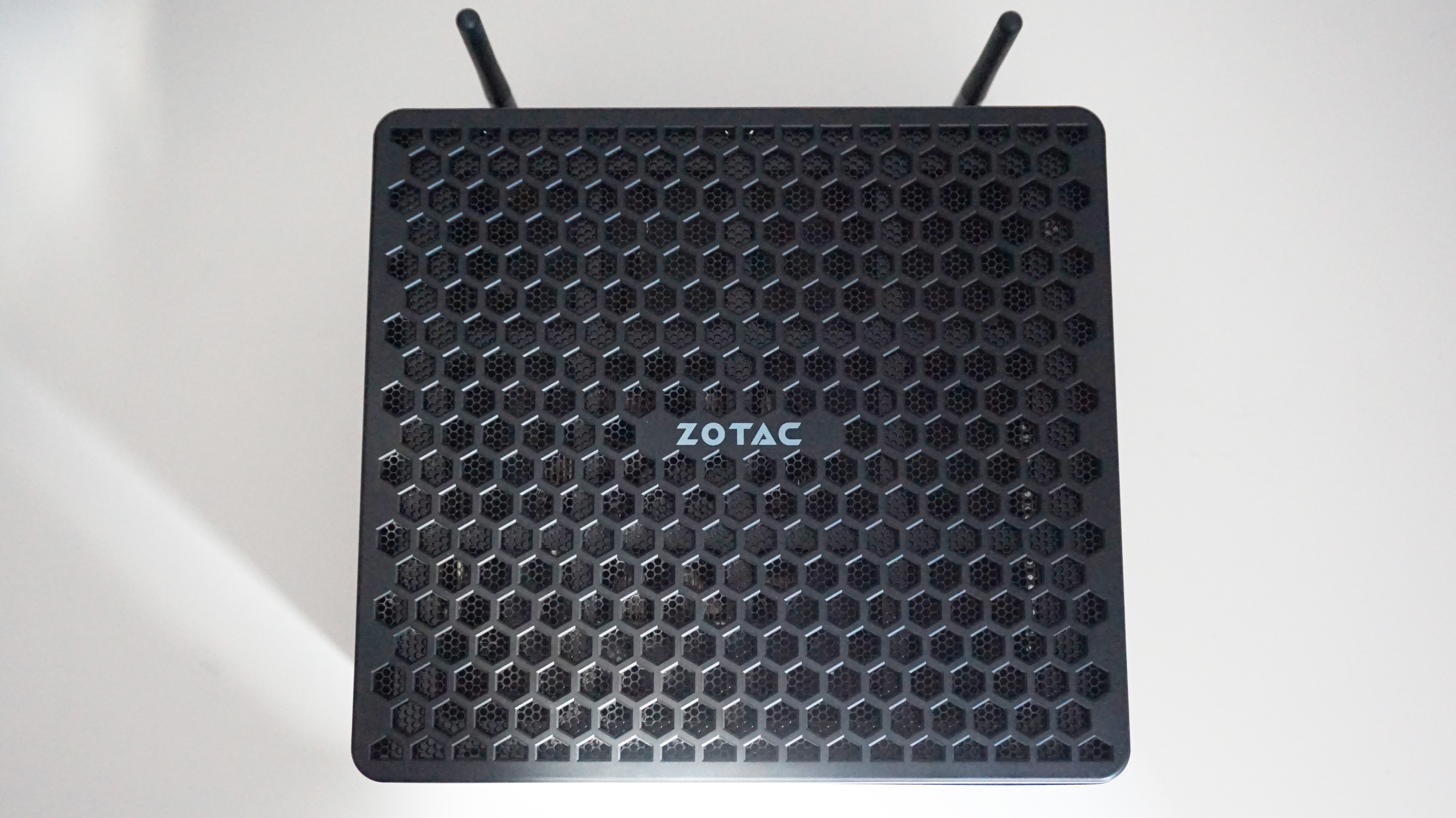 The real test of the ER51070's graphical prowess, however, came when I hooked it up to my 4K TV. Now I appreciate not everyone will have a 4K TV to use with a ZBox, but if you've recently upgraded or are thinking about getting one (or, indeed, have your eye on one of the jumbo Nvidia BFGDs, or Big Format Gaming Displays), I figured it would be useful to know if the Magnus can take advantage of all those nice, extra pixels you've just invested in.

After all, with its unassuming black chassis, this is about as family (and living room) friendly as mini PCs come. Yes, it's not the sexiest thing in the world to look at, but it's a damn sight better-looking than an Nvidia Shield, and arguably more approachable than your typical console box. No 'l33t gamer' angles, no obnoxious RGB lighting strips, just a plain front with a simple, large LED power button, an SD card reader for looking at your photos on the big screen, a single USB 3.1 port for a controller (or wireless adapter if you prefer a 'lapboard' approach), one USB 3.1 Type-C port for your phone or an external SSD, and separate headphone and microphone jacks.

The ER51070's GTX 1070 put in an admirable performance at 4K, too. You're not going to get 60fps on anything but the lowest settings (and even that might be a stretch in some cases), but I found that either Medium or High produced a very satisfactory 30-45fps in almost every game mentioned so far. The only exceptions were Doom and Wolfenstein II, whose ever-optimised engines zipped through on Ultra and Mein Leben at a very pleasing 60fps.

That's impressive for such a tiny PC, and if you prefer to have higher frame rates at better graphics settings, you can always play at 1440p and make use of your TV's upscaling - which, to my eyes, often looked considerably better than anything I've seen on the Xbox One X or PS4 Pro.

It's not even that noisy, either - from a distance, at least. There's a distinct wheeze from its perpetually-rotating fans when it's plonked right next to you on a desk, but over on my sofa I could barely hear it when I had a game going - and it's certainly no louder than your typical console. 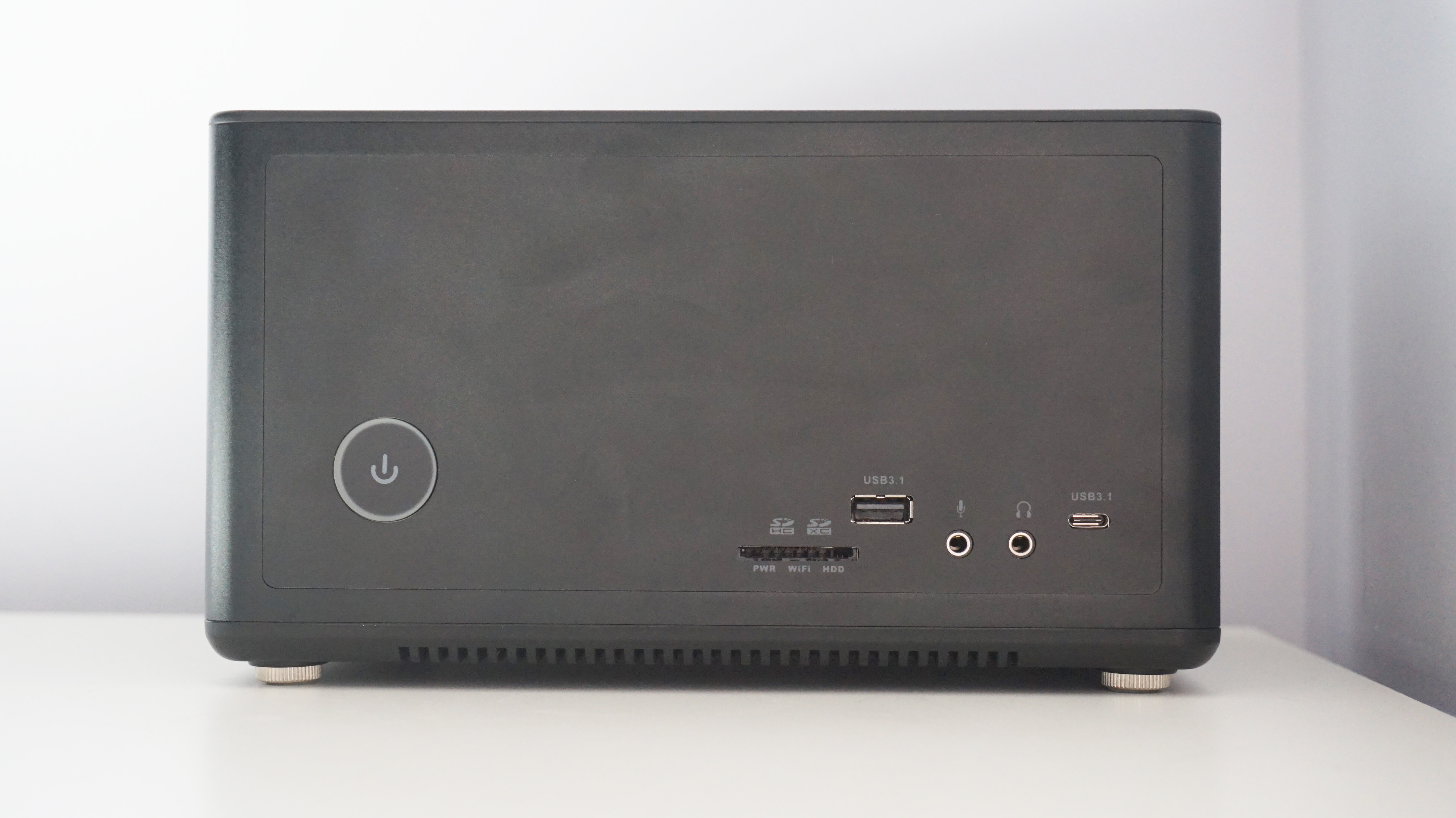 The only real sticking point with this particular Zbox Magnus is its quad-core 3.2GHz AMD Ryzen 5 1400 processor. That's not to say I would prefer one of Intel's Core i5s - I just wish it had one of this year's Ryzen+ CPUs in it instead, such as the Ryzen 5 2600 / 2600X.

It's still a decent CPU, of course, and its multi-core score of 683 in the Cinebench R15 benchmark actually outperformed the results I've got for Intel's corresponding chip, the Core i5-7400 (which can also be found in many a Zbox Magnus). It's just a shame that the Ryzen 5 2600 is almost twice as fast in this department, which would have given the ER51070 a bit more longevity in the old future-proofing department.

Still, it's a small complaint overall, and certainly not a reason to dismiss the ER51070 out of hand. Yes, at £925 it might seem expensive for its size, but as a just-about 4K capable living room PC, Zotac's Zbox Magnus has won me over. I'd much rather have something like this in my front room than a great big tower PC, and it looks the part of a living room PC as well, which is arguably just as important as its excellent graphics performance. It is, admittedly, more difficult to upgrade than your typical PC, but unlike a laptop it's not beyond the realms of possibility. All you've got to do is make sure any new components you buy fit inside its teensy chassis, and maybe follow our handy How to build a PC guide if you need a bit of help getting things installed.

I'll be looking at a couple more mini PCs over the coming week, but if you're looking for something the rest of your family won't hate every time they look at it, the ER51070 gets a definite thumbs-up.