It’s the banner that did it.

Drag… god. Jesus christ. Dwagonbown Goes UwU (or, more correctly, dwagonbown goes uwu) is an overhaul mod that turns you into the worst person in Skyrim.

It does nothing, really, except it changes most of your dialogue options to be, well, uwu.

If you’re not familiar with the concept, please for the love of god stop now. Save yourself. There is no value in this knowledge. 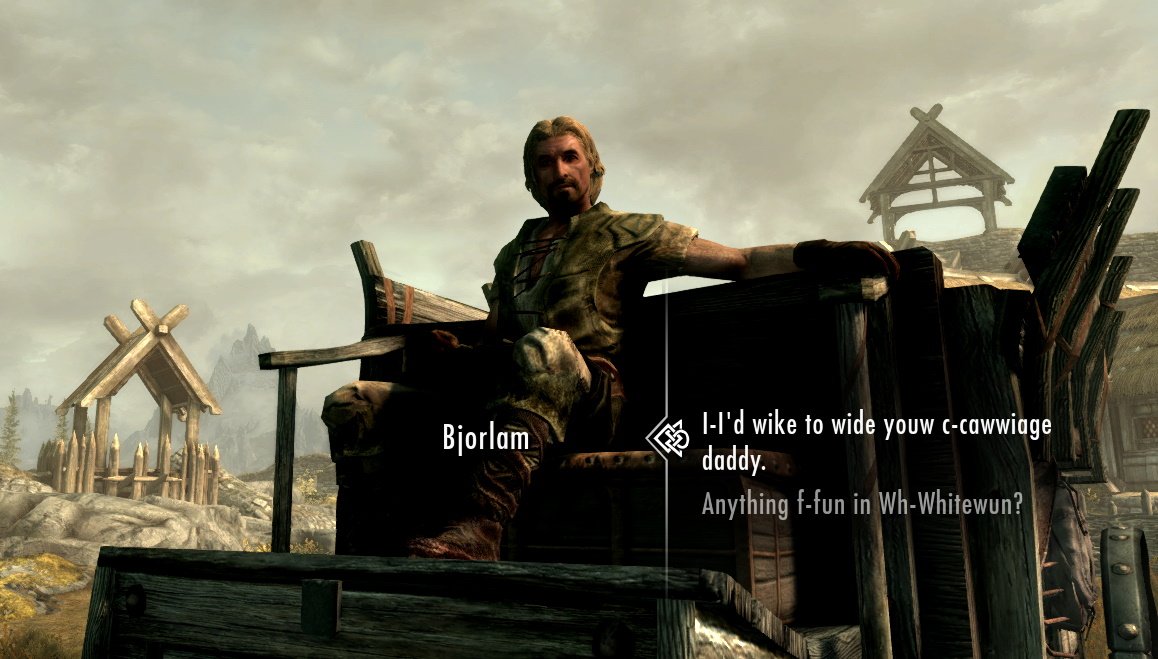 Alright, it’s on your head though. The “uwu” voice almost defies description. It is a particularly obnoxious form of faux-cutesy widdle babie talk, with a troubling vein of “step on me daddy” energy. It is inexplicably maddening, and it’s exactly the disproportionate loathing it invokes that is the point. It is too powerful.

As Polygon’s Cass Marshall discovered last year, merely uttering “hewwo” at other players was enough to boil the Sea Of Thieves in irrational, seething hatred. It doesn’t really work unless you’re doing a really specific fake American accent, either. The whole goddamn thing is ludicrous and infuriating and I regard its creator with a most dreadful admiration. 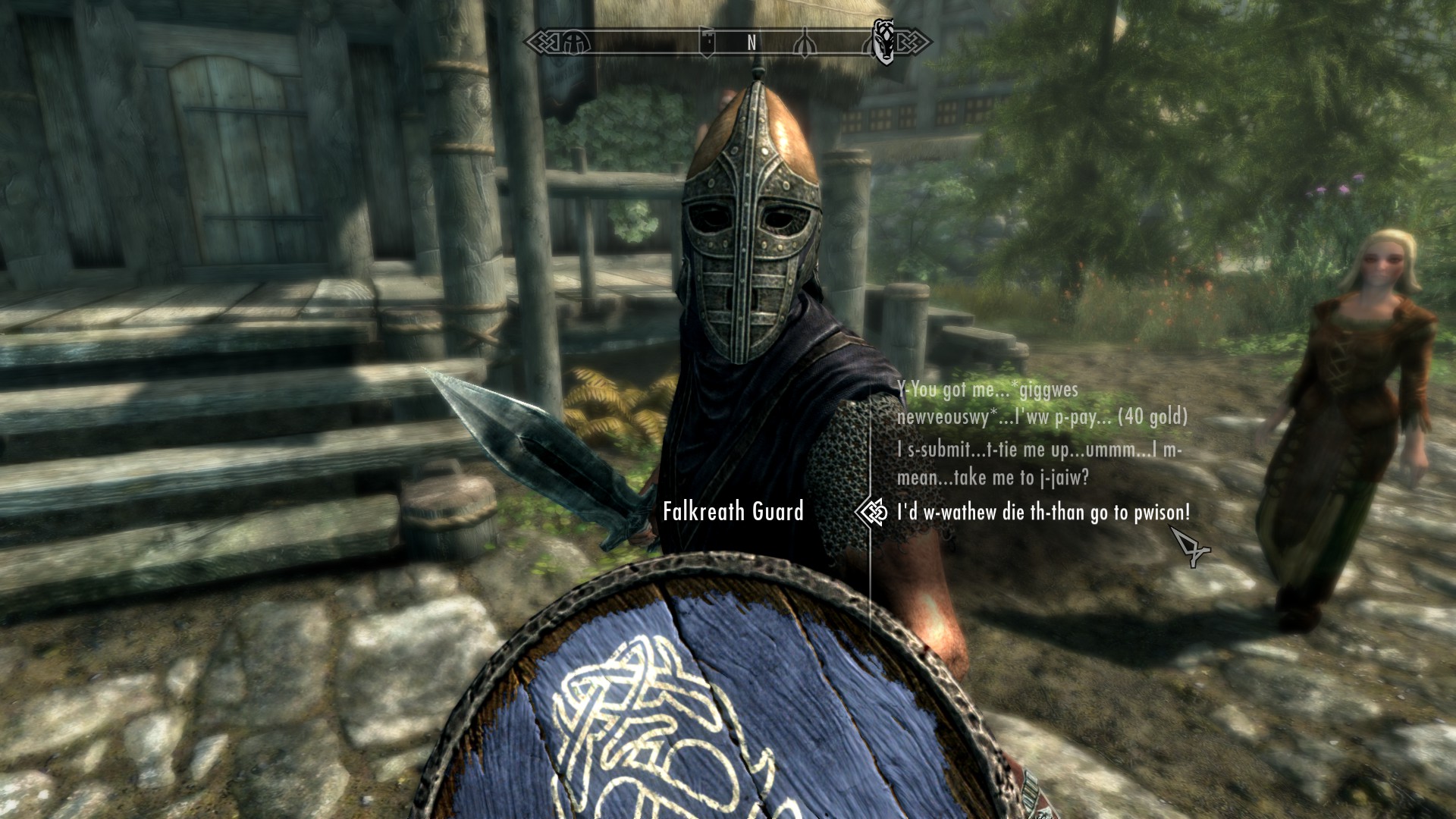 The mod page itself is a dreadful work of art, formed of a near-unreadably hot pink comic sans. Its related mods go further, with an angelfire-style, broken wraparound text and custom loading screens that… well. You’ve seen the header image. It gets a lot worse. “i can make patches for mods that add new dialogue if the authors dont mind me ruining their mods”, says its creator/summoner lucypurrrr. Please no.

The clincher though is the mod’s banner image that reads “im not sorry”. This is an “unleashing the apocalypse” sentiment and I cannot resist enabling it.

dwagonbown goes uwu works as you’d expect. It’s a direct text replacement for lots of the player’s dialogue, and may cause problems with other mods that change dialogue, but beyond that should work fine with anything, and be easily switched off. Of course, whether the words leaving your game means the curse is truly lifted is an open question. 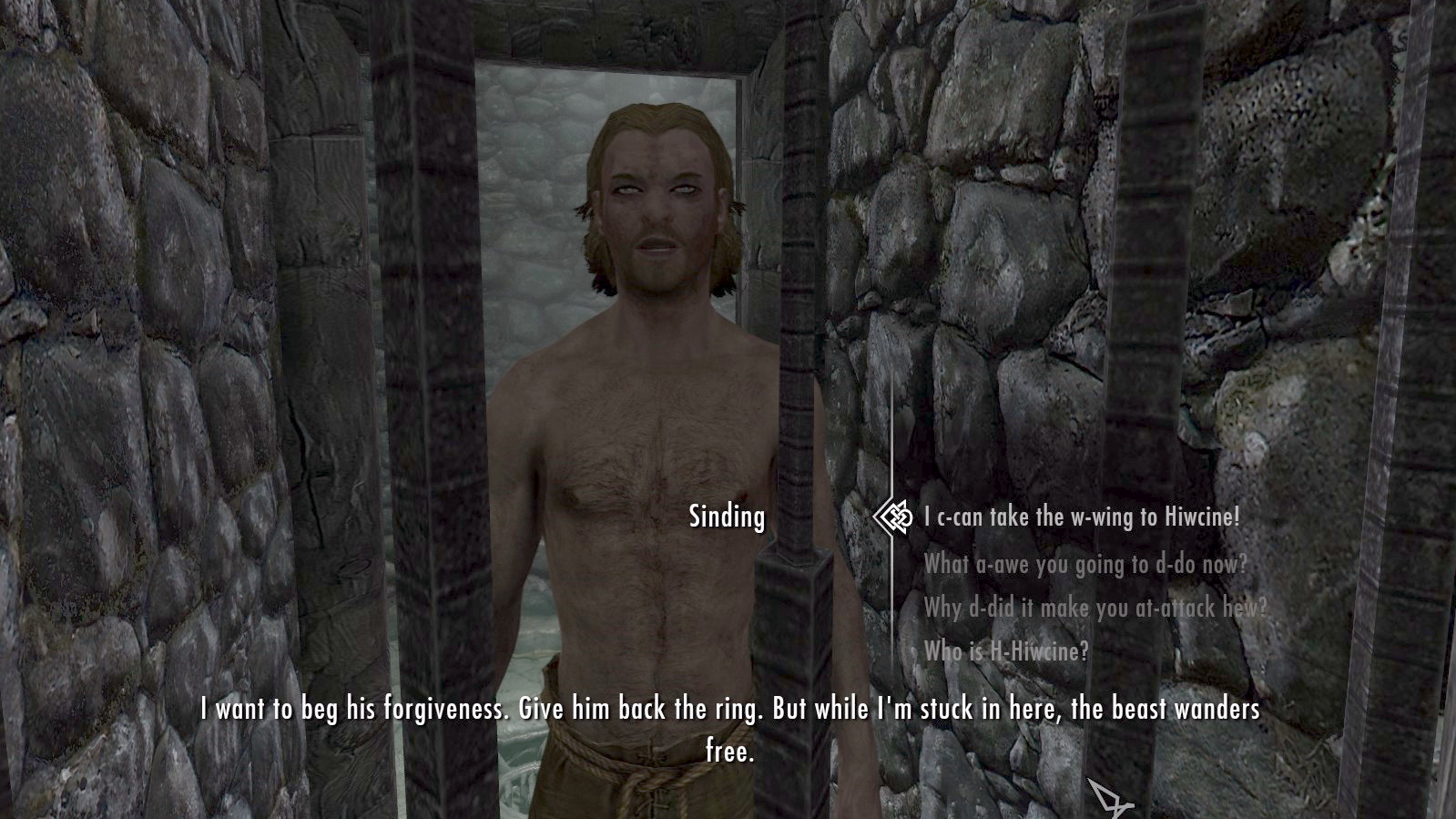 There’s probably a valuable psychological study to be made of why exactly the uwu voice/persona/abomination is so prone to winding people up. Maybe it’s reading the stuttering. Some people stutter, it’s fine, but in text? Irritating. Some people have difficulty pronouncing certain phonemes, or just aren’t exposed to them in their native language. Again, fine, whatever. And some people are very open about their masochism (sub please check), but when you throw all that together, make it all feel like such a deliberate, artificial performance, and make it never stop? A curse. An itchy tentacle invading from some hateful vortex. A being loathsome beyond all reason. The dwagonbown.

With this mod installed, suddenly the open contempt so many people treat you with makes sense. The frothing hostility of every two-bit bandit in the province? Relatable.

There is a version for the regular, “legendary edition” of Skyrim too (the older one, but the one with the most mods), and an optional second mod, uh, improves the loading screens. Do not install them. Flee.