Now, as I finally wind down my Football Manager 2012 playthrough through an unholy combination of bugs and, well, having won everything, the future beckons. I’m having an existential crisis and the line between real and fictional is melting.

But let’s start at the beginning.

For anyone familiar with the process of starting a new save file on an Football Manager game, you’ll know that you can parachute in to manage a team of your choosing. But that’s the coward’s way out. The true connoisseur knows only pain. They know only the option to start the game unemployed. So that’s how I remain until the fateful day Darlington F.C., in the fifth tier of English football, take a punt on me.

It’s a tough start, both winless and penniless. For some real world context, this is just before Darlington F.C. tragically go out of business in the real world, so money is tight to say the very least. But a bargain basement brand of football works. 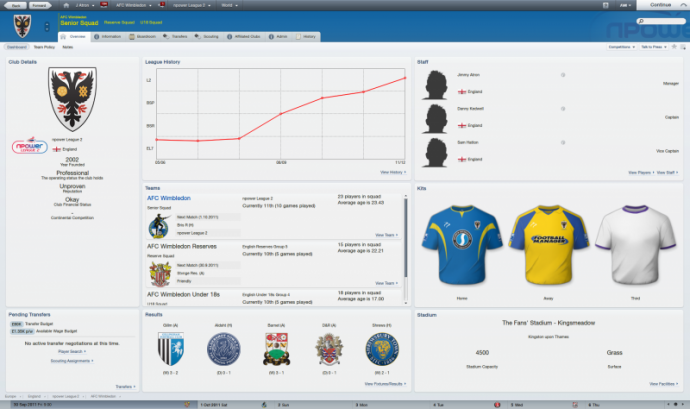 These are just generic press shots of FM2012 rather than of Daniel’s specific game, for reasons that will become clear.

The foundation of the greatest run of form in the club’s history is built on loans and free transfers as I lead Darlo from the Conference to the Championship – where the eyes of the footballing world watch with shock as we survive, still penniless, in a midtable surrounded by ex-Premier League clubs.

My deeds do not go unnoticed. Under-achieving Napoli have heard talk of one of Europe’s brightest young managers, and offer me the chance to rehabilitate them, and turn them into a team that can consistently qualify for the Champions League

I do far better than that. We dominate Italy, winning all domestic trophies much to Juventus’ disdain – not to mention the frustration of a newly oil-rich Palermo, who hoover up many of Europe’s biggest stars and towards whom I now harbour an irrational real-world hatred as a result.

It’s only the Champions League that eludes me with Napoli, and so I leave Naples for the fervour of Real Madrid, and immediately create a squad that lives up to the Madridista legend. We dominate world football. La Liga, the Champions League, the Club World Cup – all fall before the might of the squad I assemble. Transfer records are broken. Wage structures are shattered – all in the pursuit of footballing dominance.

These rags-to-riches storie are what made Football Manager is made for, but what’s slightly more unusual is that I don’t lose interest, stop, or roll a new game. I keep going further into the future. 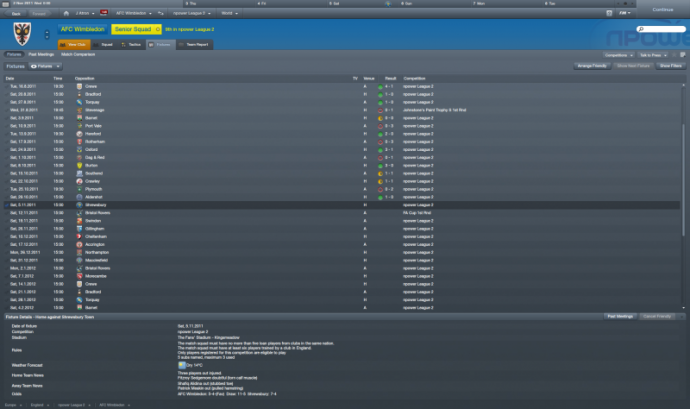 Perhaps inevitably, England come calling. It’s the proudest moment of my career, and it feels hard earned at this point. But I’m arguably taking charge of the national side at the hardest possible moment. Raheem Sterling and Ross Barkley have both just retired midway into their thirties, signalling the end of an entire generation of English footballers – our real world current generation. With no clear succession plan in place, I am left without any clear elite spine at all.

I struggle through for some time, qualifying for the Euros with no issues in accordance with the absolute bare minimum expectation for an England boss (here’s to you, Schteve). But then this footballing story gets its moment of romance: Darlington are struggling, and they need my help.

Languishing at the foot of the Championship, my former team are in danger of throwing away all of my hard work. I’ll be damned if I’m going to let that happen, so when Will Buckley (currently Bolton Wanders 29-year-old winger) is sacked as manager, I throw my hat into the ring on a basis that would allow me to manage England part time.

Naturally, I keep Darlington up, but the toils of a Championship season take their toll on me. Results suffer at national level, and I am forced to choose: club or country.

I choose club in digital tears, but it’s a choice that is quickly vindicated. The following season, the old pattern re-emerges. We out-punch our monied rivals and win the Championship, securing the unprecedented holy grail of Premier League football. 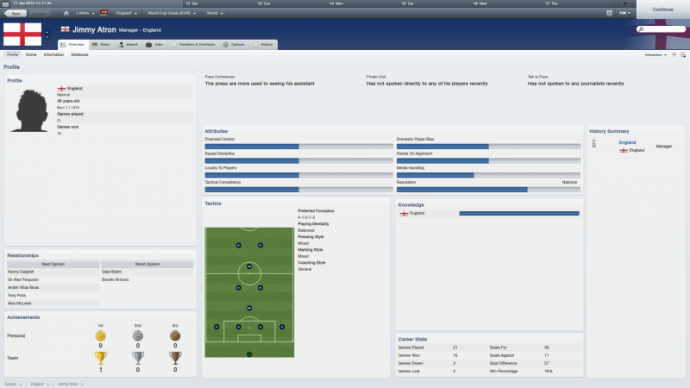 But there’s trouble brewing. In the background of this success, there is a takeover in the works. Perfect: finally a competitive budget. But no – the new owner has his own man in mind, and invites him to fixtures to watch my fixtures. We survive the season in the Premier League, but I resign, heartbroken.

Still, I don’t give up the save file. When I make my comeback, it’s with mid-table Bundesliga side Hoffenheim, and leave them four years later as serial league winners, with a Europa League (still quaintly called the EURO Cup in FM2012, modelled after the now-defunct UEFA Cup) in the club’s trophy cabinet.

Turns out Real Madrid want me back, having struggled to secure success since my departure. Maybe that’s because they sold all of the wonderkid regens I bought for them. Regens, if you don’t know, are players the game invents to replace retiring real world stars, and my save file is now filled with them exclusively.

I win everything – again. I hit 60. I existentialise.

I’ve heard stories of players who continue their avatars’ save files well into the age of 100 because the nice people at Sports Interactive refuse to kill you off. Either that, or they never thought that anyone would be sad enough to still be playing into fictional old age.

This three-quarter life crisis corresponds neatly with a host of new technical issues that crop up. Unexpected crashes. An erratic game engine. Bizarre text errors that display code rather than the game’s now-infamous mock journalism. Of course a search for support bears no avail. This title is nearly eight years old. The game’s old age feels like it matches my avatar’s.

The end is near. I decide I’m going to bow out gracefully. But when I do, I want it to be with the one trophy that’s eluded me in my arms.

I want the Premier League. 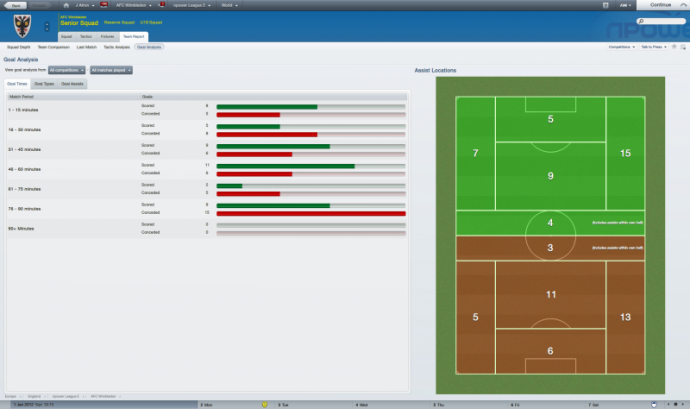 I sit tight for a solid nine in-game months, waiting for the perfect job. Man City, as dominant in this digital fiction as they are in real life, doesn’t interest me. Neither does Man Utd, who I despise in real life for their hordes of London-based fans. No, I want an old club who I can mould into a titan. When the Tottenham job comes up, I know the time has come.

I assail English football, building a dream squad of young, hungry talent, which coalesces into a team of genuine world-beaters. We win the triple, before winning a double a year later. I mark the date. At the end of the 2048/2049 season, I will retire, heralded as one of greatest managers of all time.

In predictable Hollywood fashion, things immediately start poorly. Football is nothing without a bit of drama. An August injury crisis strips a squad that’s already tired from the Euros to its bare bones. Youth steps up, performs, wilts and falls away again. 34-year-old legs run more than they should ever have to. Come the new year, we’re in the top four, but five points adrift of a romantic, climactic title win.

We’re all set for a grandstand finish, but it’s less a Hollywood ending than a heartbreaking indie drama. I come back to FM2012 with the shiny new wallpaper for MacOS Catalina in the background, filling my eyes with hope – and the game doesn’t load. I try again. And again. And again. And each time the same result.

I immediately run to the warm embrace of Reddit, and I’m not the only one. r/FootballManager is filled with posts from users now locked out of their saves after updating. Football Manager 2014. 2015. 2013. 2012.

And so my career is ended not by failure, not by ill-health, but by technical obsolescence. In the same career path which has seen Mourinho, Wenger and van Gaal all fall by the wayside due to an inability to adapt, this feels somehow fitting. 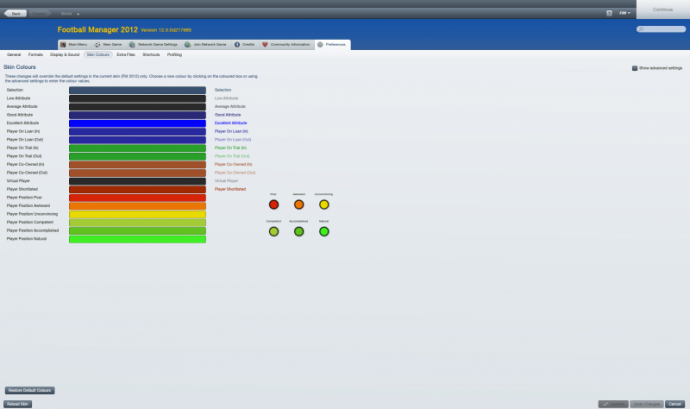 In many ways, I’m relieved – pulling the plug on my digital life myself would have been almost impossible. This way, it was done for me.

But I literally have no way back into the game files, not even the main menu. It’s all gone. I didn’t get to say goodbye to Jamil Adam, the Darlington legend who made the trip from non-league to the Premier League with me. I didn’t get to thank Chris Smalling for his years of loyal assistance and support. And Spurs fans will never know how much I care for them. I can’t take screenshots of my achievements or marvel over my ‘goals for’ tally. There is no record of my fictional life.

So what was it all for? This ending feels so inelegant for such a critical pillar of my gaming life.

I love Football Manager, so of course I’ll buy a later game in the series to fill the Manager Man-shaped hole in my life. But I’ve already poured so much time and effort into my own personal fiction that the prospect of doing it again just feels exhausting. The beauty of Football Manager is that every tiny decision you make sends the direction of your save file careening off into a totally unique sub-universe. That’s why I never upgraded. I have emotional ties to the world that I’ve created.

That journey isn’t lessened at all by this unglamorous end. It just makes it all the more painful, and bittersweet.