Dark Souls modders are forged in the flames of adversity. While mostly limited to technical improvements (such as Durante's fixes for the wonky original PC port) and small texture packs, the past few years have brought about a whole new genre of Souls mods for all three games. While limited in what can be added to the trilogy (though breakthroughs are being made on that front, too), it turns out that by creatively rearranging what's already there, you can get what feels almost like a new game. Today, we take a peek at a bundle of B-Side adventures across the entire series.

PSA: Dark Souls anti-cheat and you 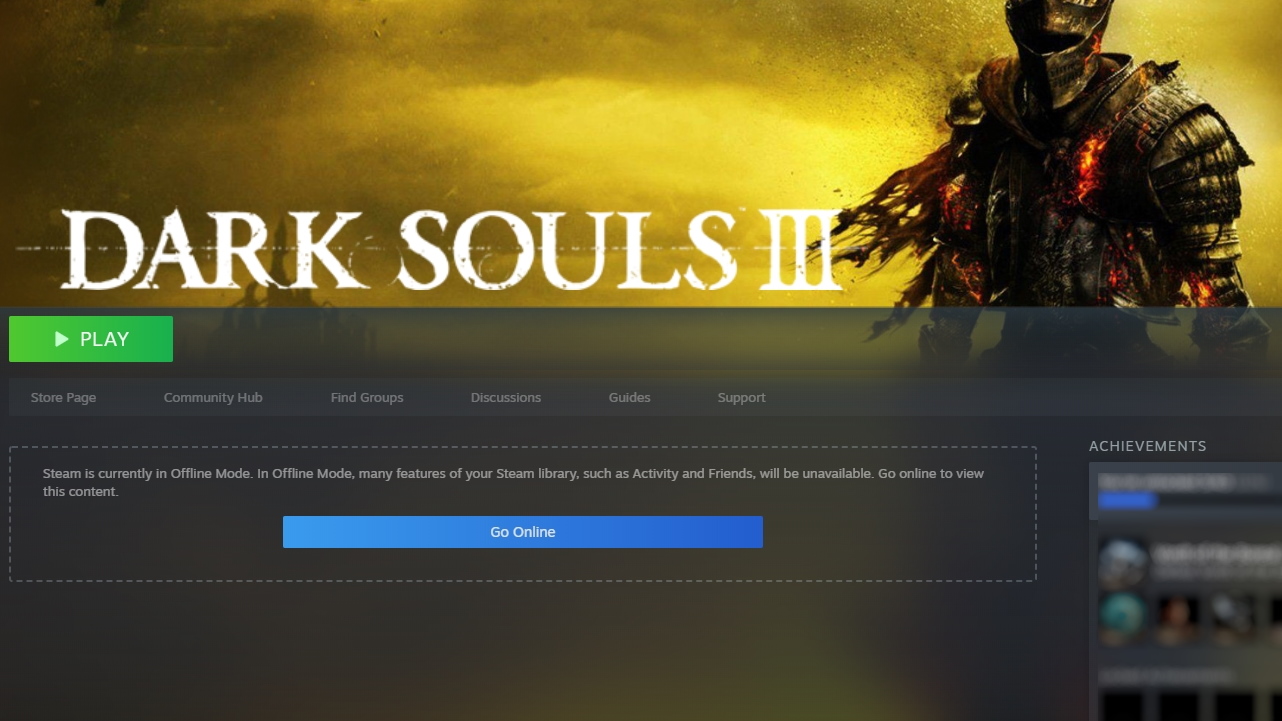 Unless you manually cut the connection, Dark Souls mods for all three games can be picked up by FromSoftware's slightly overzealous cheat detection, resulting in a hard (you can't play at all) or soft (you can only play with other 'cheaters') ban from online multiplayer. Before playing any of these mods, please set Steam to Offline Mode. Some of the mods featured below have their own online mode lockout features, but not all of them. So please, check yourself before you wreck your Souls account standing.

Beyond that, installation of these mods is mostly straightforward. Just make sure you have a clean install of the game in question and follow the installation instructions on the Nexus page. No mod managers here, sadly, but it's nothing too fiddly; sometimes it's just as simple as unzipping something into the game directory and playing as normal. Have fun storming Sen's castle!

Some of you might be asking "why Remastered, and not the original Prepare To Die edition?" Two reasons. The first, and more personal reason, is that I'm on a laptop with a 75hz-native monitor which the older version of the game just doesn't play nice with. Second, and possibly more important, is that the original release of the game is no longer for sale on any major storefront. So, Remastered it is. Which is fine, as it means you still get to play the biggest and best version on offer.

Daughters Of Ash by "Grimrukh"

Probably the largest and most fleshed out of all the mods here, Daughters Of Ash stretches Dark Souls' assets to new limits. While unable to add new models or creatures to the game (though some are restored from cut content) or drastically remodel areas, modder Grimrukh has somehow created what feels like an elseworlds version of the game. The stated goal is to recapture that sense of playing Dark Souls for the first time, and I was certainly on edge the first time I delved into the dead city beneath the Firelink shrine. This time, though, instead of ghost-murder hell I found a quiet, sad place, and an easy path to a far more lively Valley Of Drakes.

Even before that, this mod had surprises for me. Previously easily-reached areas are locked off, and new paths are opened up, making progression through Daughters Of Ash a remarkably fresh-feeling experience. The Asylum Demon fight took on a scary twist when a rotund demon butt-stomp plunged us into the basement. The mod wiki (which I recommend skipping on until you've played) says that this was a random event, and results in a tougher fight later on.

Daughters Of Ash saves a lot of its best for later. Several boss fights are now multi-phase encounters that reference the mod's new expanded lore, and brutal challenges await those who uncover the dark secret of Anor Londo. There's some technical rough edges like objects popping in as you cross room thresholds, but this one is a must-play for Souls fans. While I played the version of the mod for Dark Souls Remastered (which is easier to set up), there is a multiplayer-compatible version for the older Prepare To Die Edition of the game, available here. Daughters Of Ash is especially eye-opening if you've played Dark Souls to death, with many surprises I don't want to spoil.

If Daughters Of Ash and its sweeping changes was a bit much, Prepare To Die Again: Lordran Reborn might be more to your tastes. On paper, it does a lot of similar things - reshuffling and rebalancing encounters, adding new scripting and events to boss battles and pouring in a bucketload of new rings and spells to collect. Handy, as the overall difficulty has been boosted a little. Not surprising, as Dark Souls modders tend to be players who have mastered the game in its entirety, but perhaps something to look out for if you're just a casual fire-linker.

The black sheep of the Souls family (though still a decent enough game), perhaps this is where the interest in remixing Dark Souls began. The Scholar Of The First Sin re-release of Souls 2 introduced new event scripting and reinstated lost content to the world. Perhaps inspired by the frequent appearances by the Pursuer, modders decided to double down on surprising the player with hilariously deadly encounters. Prepare To Die indeed.

Before we get into the game-changing mods for Dark Souls 2, a quick shout-out for this little fix, without which I might not have been able to stomach a return trip. If you use an XInput controller or emulate one, this lets you remove the huge dead-zones from the centre of the analogue sticks and along the cardinal directions, making for a far more controllable game.

Augur Of Darkness by "Vempirick"


"TheRubyAxe" explores the new paths in and around Heide.

After a bit of wrangling to install this mod (make sure you both unpack and patch Souls 2 with UXM), you might want to get your running shoes on. The first scene thrusts you unarmed and unarmoured into a pile of bones, being chased by bone-wheel skeletons, and it only gets rougher from there. There's even a magic-slinging giant lurking in the tutorial area that you'll probably want to sprint past, and plenty of oversized knights (as seen outside the Tower Of Heide) stomping around the Forest of Fallen Giants. At least there's fewer head-chomping ogres.

While it might seem that Augur Of Darkness is preoccupied with murdering you to death (and it is), there's a lot more to it. Through careful placement and removal of scenery objects, Vempirick has created whole new paths through familiar environments. Battles play out entirely differently, as you access rooms in wildly different orders. Those rooms will all be full of terrifying deathtraps and powered-up invading dark spirits, but at least it'll be a fresh experience after so many years of wandering familiar halls.

If you're a masochist, you might also want to consider using the optional Speed Demon patch listed on the mod's Nexus page to increase the speed and aggression of monsters. 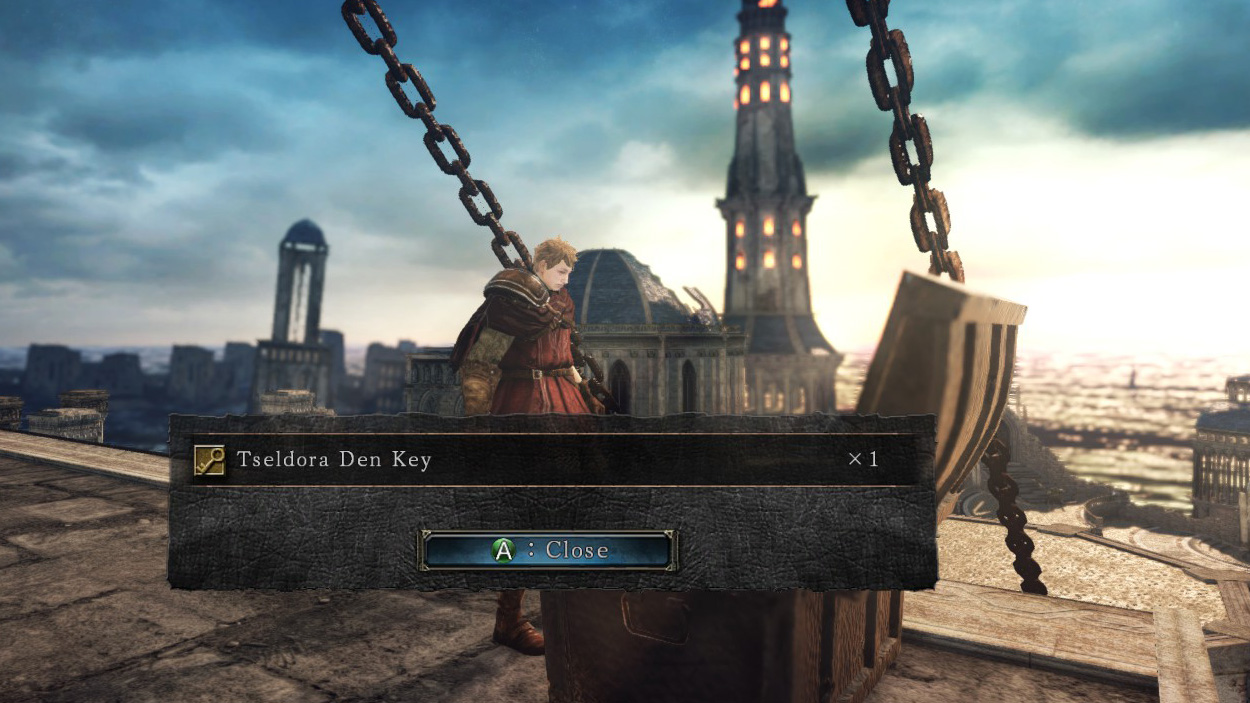 Randomiser mods are the 'in' thing these days. There are ones for Metroid, Zelda, and the entire Souls trilogy. While there are versions for Souls 1 and Souls 3, the weird and wild collection of items in Souls 2, combined with item-centric progression make it a natural candidate to roll the dice on. As such, this may not be the biggest or most technically impressive of Souls 2 mods, but it's the most popular, especially among Twitch streamers.

It takes skill and knowledge of the game to adapt plans and travel routes on the fly, as you find yourself gaining access to areas in an unpredictable order. There used to be a mod for randomising enemies as well, but apparently it's hit some technical snags and is unavailable until it's fixed. When is what happening? Possibly never. Dark Souls 2 never got much respect.

Souls 2 has perhaps the smallest crop of mods to pick from (although Augur Of Darkness' sweeping map changes are impressive). A brand new mod, Vestiges by "Xylozi", just made its public debut, and offers a gentler remixing of the game, with some new shortcuts to discover. I didn't have time to dig too deeply into it, but it might be worth a look for the itinerant undead.

Souls 3 modding is in the wild and experimental phase. New tools are being created every day, giving modders deeper access to the files than in any other FromSoft game. Entirely new weapons, armour sets and spells can be created, although map editing is still a work-in-progress.

Cinders is the biggest Souls 3 mod, and still in active development, offering both regular and experimental 'playtest' versions, depending on how bold you're feeling. Seemingly unconcerned with lore or telling a coherent story, Cinders feels like a free-wheeling sandbox variant on the game. There's tons of new classes to pick from, some of which have entirely new gear, and progression is faster than the vanilla game, geared to getting you into the juicy mid-game character building part more quickly. Magic users will find scads of new spells to play with, too. Progression through the game is vastly more open in Cinders, thanks to the placement of some interesting shortcuts, including one that leads straight to Archdragon Peak from the beginning of the game.

There are a lot of other smart features to this mod. Around the starting hub you'll find notebooks detailing the fundamentals, including how they've re-worked covenants into offline buffs, rewritten status ailments, and rejgged crafting. There's even an optional hard mode, activated by picking a new option from the Firekeeper's menu, which adds extra enemies to the world that go berserk at low health, but drop extra souls to compensate. This is on top of tougher, meaner enemy placement, too, so buckle up.

Buckle extra hard, in fact, as there are 70-something new mini-bosses scattered across the world to kill or be killed by. Even if it's not narratively coherent, it's liberating to have so much freedom right from the beginning. You can even re-fight old bosses (in original or 'nightmare' forms) for extra rewards by talking to the Handmaid. 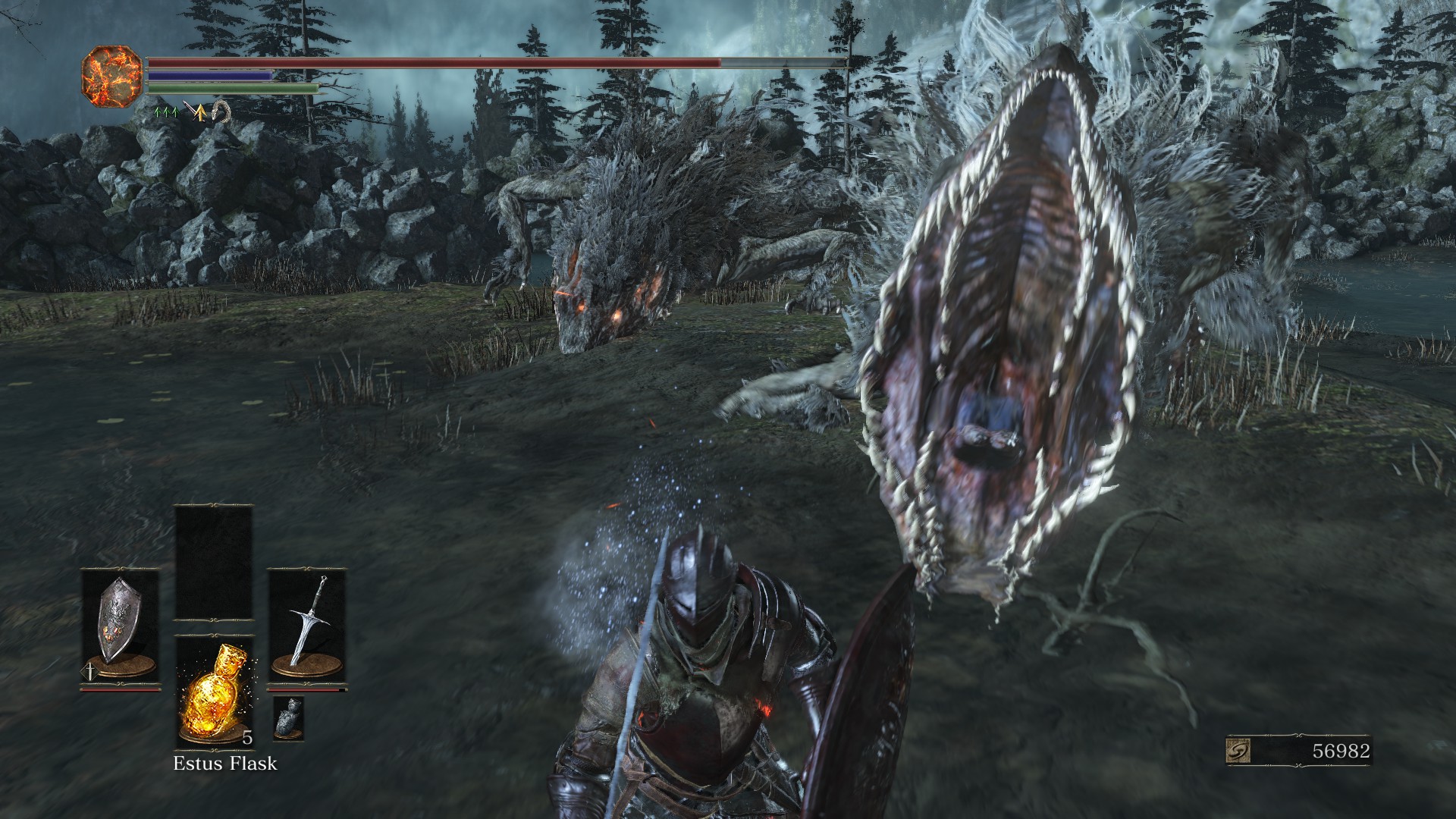 Sequel to the popular mod of the same name for the original game, this one can best be summed up as Dark Souls 3: Super Turbo Championship Edition. This is for players who've cut their teeth on the regular game and committed all the boss attack patterns to heart. If you're feeling bold, however, it's a surprisingly entertaining time, provided you can get over the initial difficulty hump and punch your way through a beefed-up Iudex Gundyr. By the time I had a chance to level up, I was sitting on a bounty of 16,000 souls.

While a much smaller download and less ambitious mod, the Ascension's effect is immediately visible, and frequently hilarious. There are around twice as many baddies, and someone might have spiked their Estus because they're extremely aggro and twitchy. Every room is a murder-gauntlet, with the suffering slightly offset by the fact that you level up extremely quickly and put together your favoured character build in no time. On top of turbo-charging baddies, it rebalances a lot of items and spells, and rejigs Covenants into single-player buffs. You can see the full list of tweaks made here.

While I'd not recommend either Cinders or Ascension to newer players, they're fun picks for a return trip through the game - not that you need an excuse to immerse yourself in Dark Souls 3's combat sandbox again. And there you have it: six mods (and change) to die repeatedly for. Fitting for a series about the tireless, obsessive undead that the game should still be alive and kicking after all these years. I wonder what the trilogy will look like in another five? Judging by teaser shots of this upcoming Souls 2 graphical mod by "Stayd", there's plenty more room for improvement.