Your gaming monitor is one of the most important parts of your PC, and a big part of that is down to the type of panel it uses to display all those lovely polygons. You’ve probably seen lots of different monitor panel types crop up in a gaming screen’s specs sheet, too: words like TN, IPS and VA. But what do they actually mean, and how do they affect the quality of your gaming monitor? Well, as you’ve probably guessed from the title up top there, I’m going to tell you everything you need to know about all the different gaming monitor panel types, including their strengths, weaknesses and which one you should look to buy if you want the best possible image quality.

Now, I’m going to warn you – most of what you’ll read below is all going to be pretty general. Not all panel types behave the same way, for example, and there will always be some that outperform the rest. That’s why it’s still important to read proper reviews of gaming monitors so you can get an accurate picture of how a monitor’s panel type stacks up against the rest.

I’m also not going to spend ages talking about the exact chemical structure of every single type of sub-pixel, because, well, there are plenty of other people who have done that already. If you’re after that kind of detail, I’d suggest heading over to the folks at TFT Central. Instead, I’m going to be concentrating on what you actually need to know about gaming monitor panel types, such as how their various characteristics affect their performance, and how you can avoid falling into monitor misery by making sure you know exactly what specs sheets are talking about when they start throwing a million acronyms at you. So let’s get to it. 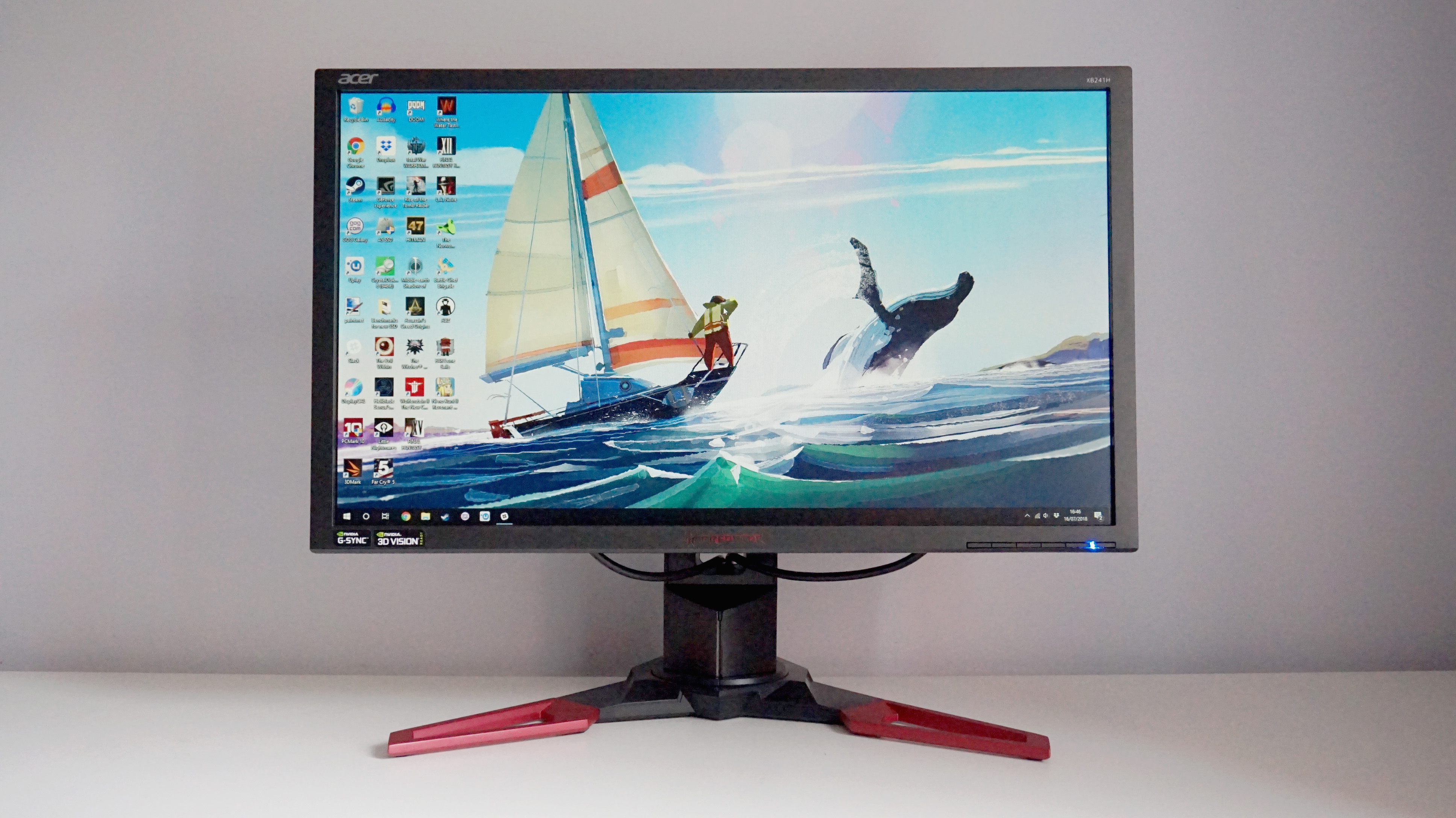 The Acer Predator XB241H is one of the best TN gaming monitors currently available thanks to its Nvidia G-Sync certification.

Let’s start with one of the most common monitor panel types available today: TN, or Twisted Nematic. TN panels are what you’ll find in most gaming monitors these days, especially ones with high refresh rates and those geared toward competitive esports and the like.

The good: That’s because they’re a) generally quite cheap to make and b) have the fastest response times out of all the different panel types. This means there’s less lag between you clicking your mouse or tapping your keyboard and that action being translated onscreen, making them ideal for twitchy shooters and games that need fast reaction times.

There are other benefits to having a fast response time as well. These include less blurring and ghosting when fast moving objects appear onscreen, which in turn leads to a clearer, crisper image. Indeed, some gaming monitors boast their response times are as low as just 1ms sometimes, but the key thing to watch out for are the words that come after it, such as ‘black-to-black’ or ‘grey-to-grey’ (which is often abbreviated to GTG).

Black-to-black is the standard response time measurement and refers to the amount of time it takes for a pixel to change from black to white to black again. It’s the fastest change possible in a monitor, and is generally regarded as the monitor’s best and more accurate response time.

The problem is that this kind of transition doesn’t often happen in everyday practice – especially not when playing games. Instead, most pixels are showing colour, which is why some manufacturers quote a grey-to-grey response time instead. However, this can mean different things depending on different manufacturers, as it all depends on what shade of grey they take as their starting point. Lighter greys will transition to white faster than darker greys, for example, and so a GTG figure won’t necessarily be the same for every pixel. As a result, GTG times are more of a rough guide to a monitor’s response time rather than a definite fact.

Over the years, other technologies have come along to try and improve a monitor’s GTG response time, or help correct the effects of having slightly slower response times. Some monitors, for instance, have an Overdrive feature, which is designed to make pixels change states much faster by applying a higher voltage to them. This can often dramatically improve a monitor’s GTG response times in particular, and if you see a very fast one quoted on the box, it’s almost certainly been achieved using some sort of Overdrive feature.

The bad: Alas, the disadvantage of picking a TN panel is that they generally don’t have the best colour accuracy and they also have quite narrow viewing angles. The former isn’t the case for every TN screen – those certified by Nvidia for use in their G-Sync gaming monitors, for instance, have to meet rigorous colour accuracy standards – but I’ve seen plenty of non-G-Sync screens that barely cover 85% of the standard sRGB colour gamut, which means washed out colours and generally not very rich and vibrant images.

Viewing angles, on the other hand, are a bit more of a hurdle. Most of the time you’ll see them quoted as 160 / 170 degrees, but unless you’re looking at the screen just right, colours can sometimes look a bit off, while contrast goes up the spout. As a result, getting a TN monitor with a height-adjustable stand as opposed to a fixed one can often be a good way to counteract this problem, as this gives you more flexibility to get the monitor in exactly the right position.

The Asus ROG Swift PG27UQ has a superb IPS display.

IPS monitors, on the other hand, are all about colour accuracy. Largely made by LG, there have actually been lots of different types of IPS panel that have emerged over the years as varying manufacturers tried their hand at matching the quality of LG’s panels, leading to dozens of different variations and combinations of acronyms. These days, though, most manufacturers (especially gaming ones) just tend to say they’re IPS as opposed a specific variant.

Unless, that is, it’s an AHVA, or Advanced Hyper-Viewing Angle, panel. Despite sounding like a VA panel (our third main panel type, which you’ll find more on below), AHVA is actually another type of IPS panel produced by AU Optronics and offers pretty much identical performance to a classic LG IPS panel.

The good: As I just mentioned, IPS panels generally have pretty great colour accuracy (I normally expect an sRGB coverage score of around 96% here) and wide viewing angles, making them better suited to colour intensive work and tasks like photo and video editing. This is true across all types of IPS panel, and their superior viewing angles (often quoted as 178 / 178 degrees) means you don’t get that nasty colour or contrast shift when you’re looking at the screen from a funny angle.

The bad: Unfortunately, their response times are often slower than TN panels, although these have become a lot better in recent years. Personally, I’ve never had any problems with latency when playing games on this type of screen, and for me, image quality is a lot more important than a couple of millisecond’s difference in overall response time.

They can also be more expensive to produce than TN panels, which, combined with their slower response times, is another reason why you don’t tend to see them a lot in displays designed primarily for gaming.

VA panels are becoming increasingly common on curved and ultrawide monitors, such as the Philips 349X7FJEW.

Finally, there’s the VA, or Vertical Alignment panel. Much like IPS, there are dozens of different types of VA panel, but the main ones we need to concern ourselves with are MVA (multi-domain vertical alignment) and AMVA (advanced MVA).

MVA panels were first designed to sit in the middle of TN and IPS displays, offering better viewing angles than TN screens and higher contrast ratios and deeper blacks than IPS. However, their colour accuracy isn’t quite as good as IPS, and they don’t have very fast response times, either.

AMVA, on the other hand (not to be confused with the IPS-like AHVA panel tech described above) builds on that even further, improving the panel’s colour accuracy while still maintaining those ultra high contrast ratios and deep blacks. Its viewing angles still aren’t quite as wide as IPS displays, though, and its response times are still a bit slower as well. However, through the use of features like a monitor’s Overdrive function, VA response times are now much faster than they used to be, making them a much more common occurrence in gaming screens, especially when it comes to curved or ultrawide displays.

The good: As a result, VA monitors can sort of be viewed as the ultimate compromise screen. The key advantages are their best in class black levels and their superior contrast ratios, and compared to TN panels, they also have better viewing angles and higher colour accuracy.

The bad: However, while VA might rectify some of the weaknesses you’ll find in TN screens, they’re still not as colour accurate as IPS panels, and their narrower viewing angles also can’t compete with their IPS rivals, either. Their main weakness, however, is their slow response time, which is generally said to be the slowest of the three main panel types. As I said, steps have been taken to try and mitigate this when it comes to putting a VA panel inside a gaming monitor, but if your gaming library consists solely of competitive shooters and the like, then you’re probably better off looking elsewhere.